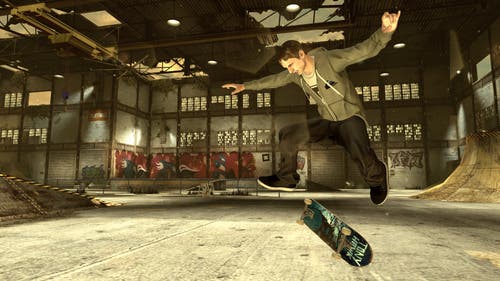 Tony Hawk’s Pro Skater HD on PC is a huge bummer. The game itself is structurally sound and plays identical to the console versions. But what makes it so different?

Editor’s Note: This review stands separate from the XBLA and PSN releases because they are virtually identical. This, is not.

As far as career progression, tricks, and overall content including the music – there is nothing here that the console versions don’t have. The game supports keyboard and gamepad controls. They keyboard controls are good and feel just like they did in years past, but now with modern gamepads, makes it really the best way to play. Though, you’ll have to figure out the gamepad controls on your own because the game doesn’t dynamically update to show you what they do, it only shows keyboard controls. So it’ll be a bit of a learning curve if you don’t know what the buttons do, you’ll likely be able to guess what they are.

You unlock levels by completing 5, 6, and then 7 objectives per level. And each level is progressively harder and demanding in objectives than the previous. But they aren’t overwhelming It could take a few hours to unlock all the levels, and then you can keep going back for more objectives. There is a Free Skate mode that you can go in and play endlessly to perfect your tricks.

Next is the unexpected loss of multiplayer. You can’t go online with friends like you can on the console counterparts. Now, to compensate for this, the price of the game dropped $5 to $10. A pretty even trade, perhaps more into half-off would have hit the sweet spot.

Finally and sadly, the game contains no graphical options. As a PC game, this is a huge failure as there is literally no menu to select resolution, antialiasing, and other options you’d expect. You can however go to your Steam folder: Steam/steamapps/common/Tony Hawk’s Pro Skater HD/Engine/Config/BaseEngine.ini, find ResX and ResY and adjust it to your liking. Once you do that, the game looks far better than the console versions by a large margin.

THPSHD is a fantastic revival on its own. But on PC, with the loss of multiplayer and lack of graphic options, makes this an extremely hard sell. The game itself is pretty awesome and is almost worth the money they’re asking. If you have no other way of playing this game, this version will be sufficient and is the prettiest. It’s just unfortunate there isn’t parity with the other versions of the game.