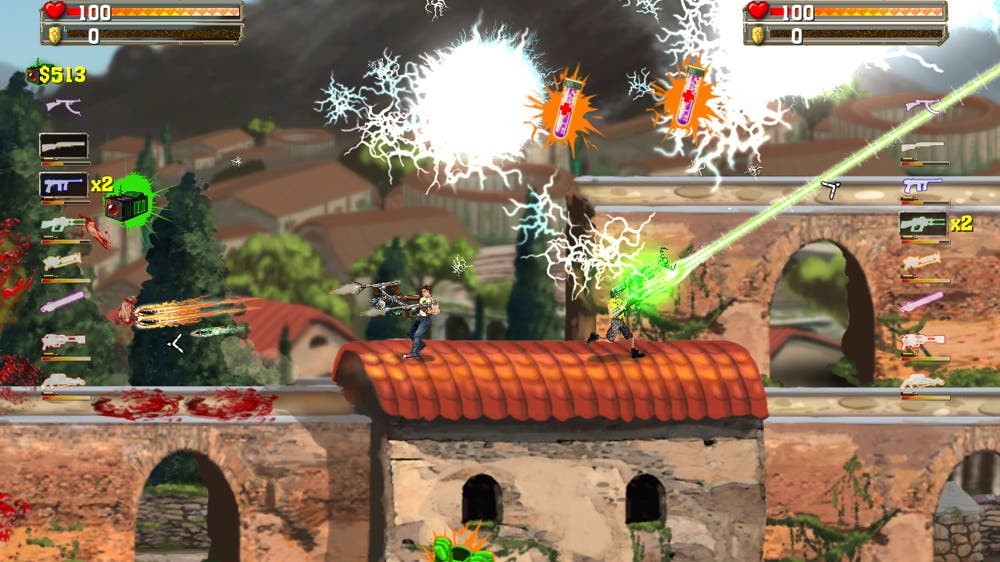 From the get go you’ll know the tone that Serious Sam Double D XXL sets; I mean look at the name. Don’t let that get you down though, even though they get a little ridiculous the game is still a hoot to play. You’re Serious Sam and in this day and age, who doesn’t know about this Duke Nukem like action star? You get guns, you blow crap up, all while being the manliest of men. You’ll notice the artwork first and boy is it interesting, it feels flat and almost flash game like in the way the animation moves. That’s not knocking the game either as, in a way, it adds to the charm. The artwork itself, it’s ok but you won’t sit there long enough to admire the scenery when you’re constantly blowing shit up.

In Double D XXL you’re playing in the 2D side scrolling perspective moving from left to right making your way through stages getting to the end as fast as possible. In fact the leaderboards are populated by the amount of kills you get and how fast you make it through levels. Sam is out to figure out why these monsters have returned and is being guided by his busty digital female pal Netrisca. She’s so busty that her chest is hanging over the text box used for conversations; oh stop, you knew what you were getting into when thought about this game. The game does have voice work and spoilers, it’s very cheesy, very very cheesy. As with the art it just seems to fit well when you compare this game to the likes of a B-movie. Again, not a slight against the game but just fits so well.

As you progress through the story, you collect new weapons, currency for weapon upgrades, and the gun stackers. What are gun stackers you may be asking? Well they are these wonderful devices that allow Sam to stack different weapons on top of one another to make more powerful weapons. The actual ability to stack weapons is nifty and even has some strategy involved. Guns are stacked above one another then stacked further away from you. One thing I came across was how much better it was to have a melee weapon like the chainsaw out front versus at the bottom of the stack, I mean you can reach charging enemies easier this way. Based off different upgrades for your weapons, you’ll want to adjust where you place it on the stack for maximum damage and coverage.

Speaking of the upgrades, some are pretty brutal and some are just weird. My favorite of the bunch was using the grenade launcher with beetles. Instead of shooting grenades, the gun would pour out these carnivorous beetles that would walk along the ground and damage any enemy walking towards you. It was nuts but a great tactic to take down waves of enemies and to help with those larger bosses. Now why would one need all this firepower? The game will throw large waves of enemies at you and spwan in more randomly, creating this giant on-screen blood bath. The enemies range from small headless troopers to giant dinosaurs and looking at some of these enemy designs, they must have let the artist just go nuts; they are strange. I remember the “wtf “moment when I encountered these pancake monster things with forks for feet and vuvuzela’s sticking out of them. After you shoot them they self destruct and cause me lots of grief. There are also kamikaze men and giant naked kamikaze women, who just so happen to be holding the bombs over their chests. The designs are just out there and crazy and doesn’t make a lick of sense, but damn it’s fun and brought a slight smile to my face. Seeing the screen fill up with blood and dead bodies is more comical than it is gross ; oh and boy does shit like to explode.

All of this talk and nothing about how to actually play these game; at first it’s strange to get a handle of as the default set up uses the left trigger to jump and the right trigger to shoot. The reason for this is because you use the right stick to aim your gun, similar to how a twin stick shooter plays. If you don’t find this a comfortable way to play though, you are free to adjust the controls how you see fit in the options. Speaking of options, there are a few interesting things you can turn on and off like being able to change the color of blood from red, white, green or donut. Yeah, donut is exactly as it sounds too, enemies just spurt out small round donuts instead of blood. You can turn the gibs (body bits that go flying when someone explodes) on or off and there is even an option to turn on cursing. Even with this switched on, I never once encountered a time where anyone cursed. When you’re tired of going at it alone, you can bring in a friend and play this game in local co-op. I was unable to try the co-op portion of this game but if it plays the same, then you’re both going to have a great time. You can either work cooperatively or play head to head for the best scores on each stage and as you progress through the game, co-op or solo, you unlock challenges by finding hidden tokens. You can play these challenges at any time but they are mainly just for leaderboard stuff. If you have $10 (800msp) then this is actually a great way to spend an afternoon or two, either with a friend or by yourself; and who doesn’t like playing with themselves?