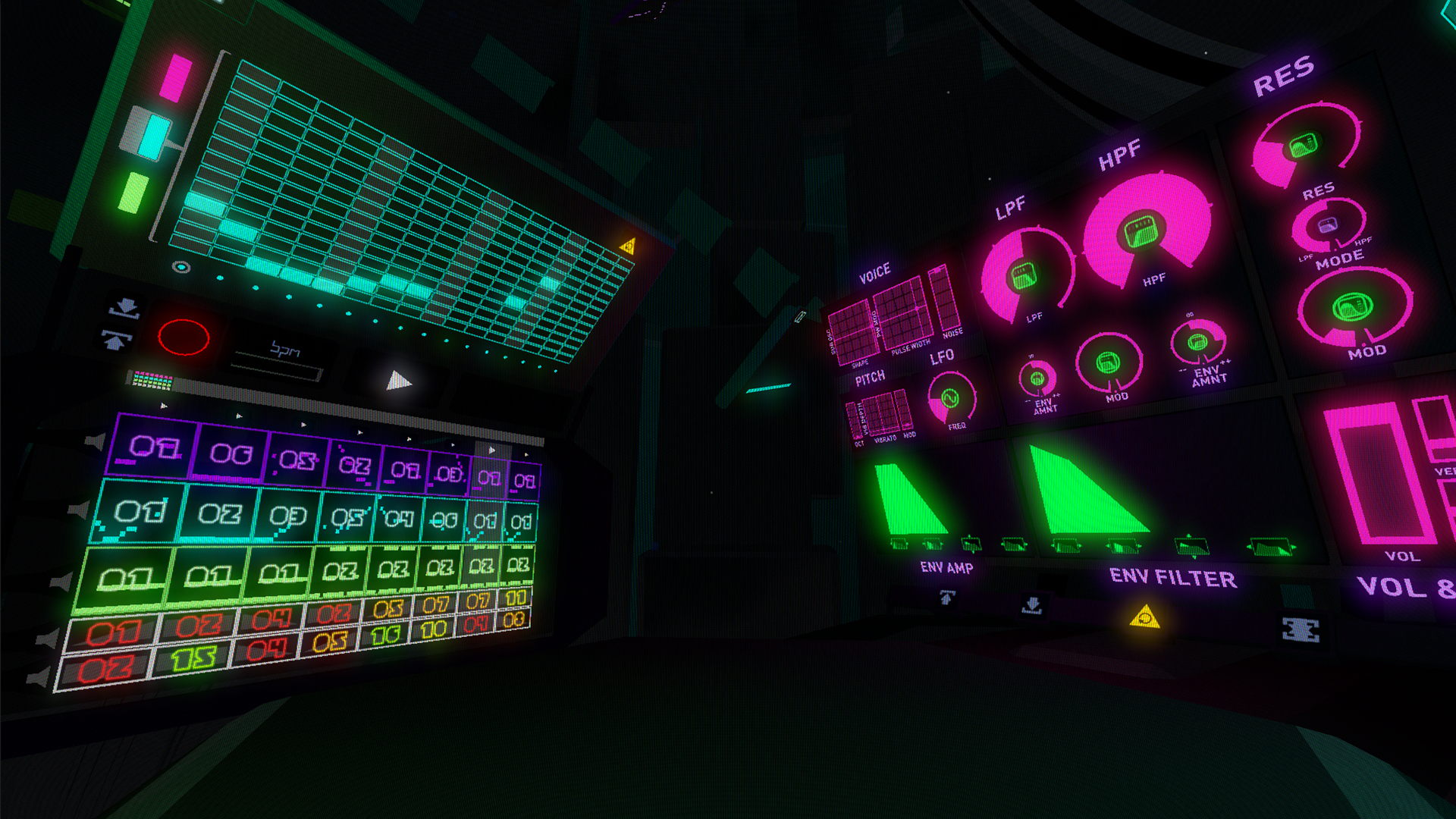 Discovery can be a rewarding experience. There’s a thrill of finding something by yourself. In the case of FRACT OSC, is an open world begging to be explored and uncover the mysteries that lie within. It is the sound of music that drives this world. It has since become broken down, and enveloped in a deafening silence. And it is up to you to resurrect what once was.

From the on-set, FRACT OSC‘s beginnings place you in the world without any pretext or any clear understanding of the hows and whys to you being there. And for the first hour or so, that lack of clarity is how you will meander and stumble around the world. In that time, you’ll begin to draw your own conclusions as to what happened as you put the pieces back together, quite literally. At first, being dropped in like this was confusing and very off-putting. In time, it grew on me as I slowly brought mechanical structures to life. But I feel that  for many, will be too abstract and obtuse from the get-go. It is fine to let the player do as he or she pleases, but it was a bit too loose in not guiding you better.

This place is visually striking, where looking around has floating particles, oscillating platforms, light beams, and pulsating orbs everywhere. Colors permeate and literally leak onto the ground. When you enter the interact mode, it takes on a filter of a tube television with scanlines that give a very unique feel and resembles Far Cry 3: Blood Dragon and it’s own set of 80s influences.

Here, there’s no reference material or anything to give the world substance or backstory. It being all about music hasn’t really told me anything. A comparison the dev makes, is to Myst, which is correct to a certain degree. However, Myst had books within the game to refer to. The answers were always right in front of you, if you were able to connect those dots. FRACT‘s philosophy is to tinker with it until you finally get it right signaled by the machinery coming to life and showing you the exit to the next area.

I didn’t ever feel like I’m solving puzzles, as I’m more just randomly flipping switches, sliding items and pressing buttons to get a solution. The developers disguise slide puzzles in neon and neat sound effects, which doesn’t help the fact you’re doing a slide puzzle, to otherwise seem cool.

There are three parts to the world that make it work, split into three colors and corresponding sound distinctions: lead, pad, and bass. The lead takes on the color of green, and you’ll find it provides the main melody. Pad is distinguished by a pink/purple, and is the sustained chord or note – which can be repetitive in-game as you’re trying to solve a particular puzzle. Bass is shown by the color of blue, and operates in the bass range as you would expect.

Sound is lost through most of your journey, especially for such a huge focus on music. I played with a Turtle Beach 7.1 headset, and it left my ears wanting more. Only when assembling a broken down device, are you treated to anything aurally. Exploring the world is just as lifeless and deafening as there are no other interactions of any kind. It’s somewhat open world as you’re free to go anywhere, but death is possible by slipping to an area you’re not meant to go and you’ll be reset. 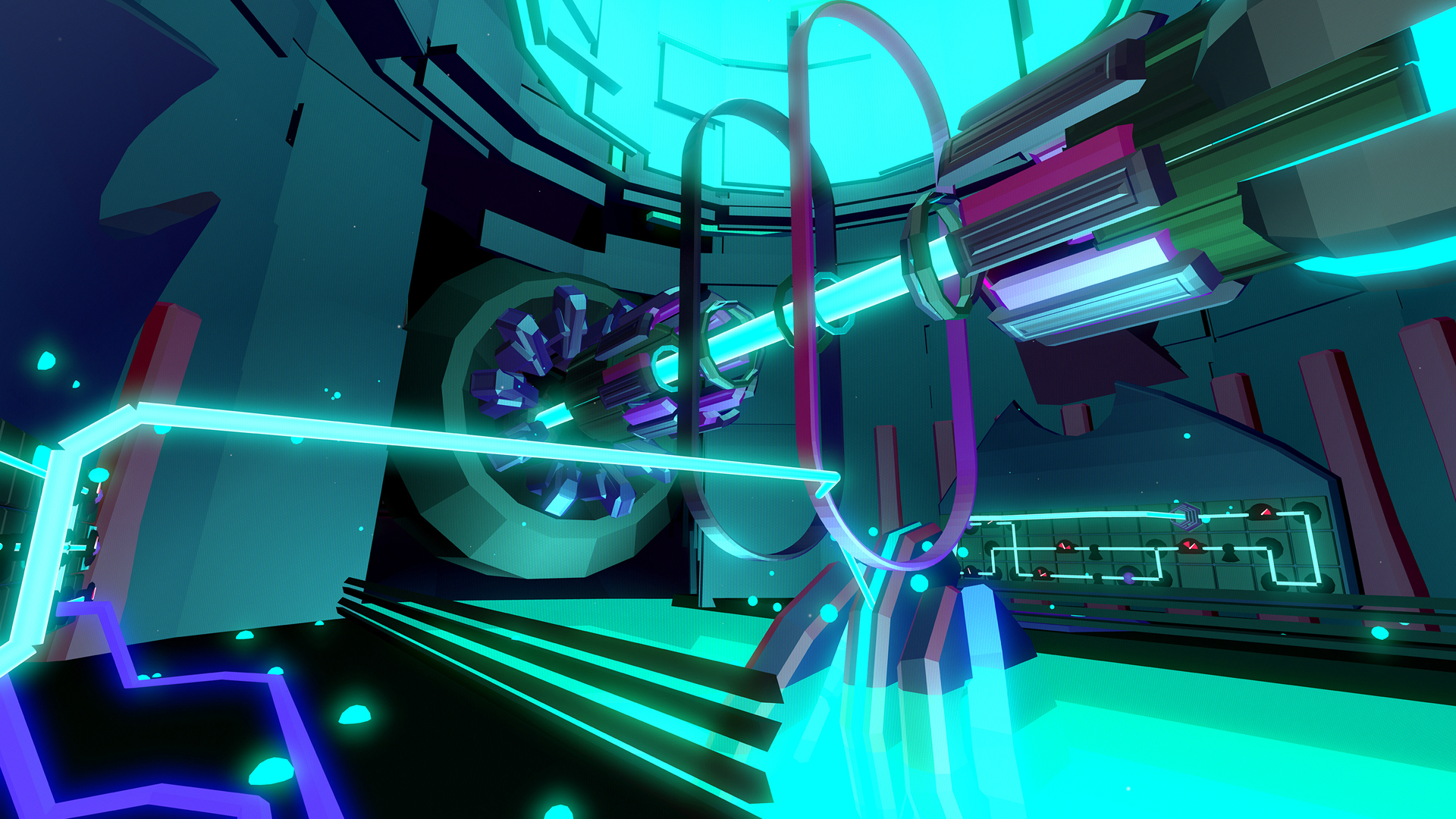 The first area you start in, is the Studio. All of it is locked and cannot be used. Upon completing puzzles within the game world, do you unlock areas of the studio compartmentally, associated with the specific location you solved it in. This sense of progression can be utterly defeated by pressing a button that unlocks all options of the studio.

For those who want to just get into making your own music, this interactive music machine can do just that. You’ll be able to create and save your layouts, and even upload them to YouTube. At some point, once the main portion of the game has been completed, essentially just becomes music software. Which is fine, because this gives reasons to return to this.

There’s no particular “moment” that I can recall that makes anything stand out from one another. The only things that stood out, actually had nothing to do with the game itself: the soundtrack from Mogi Grumbles and the soundtrack that can be created by you in the aforementioned Studio. Everything else is forgettable and well, one note. FRACT OSC is a unique experience worth having, but the nonsensical puzzles and time spent will leave many wanting more than what you were given.