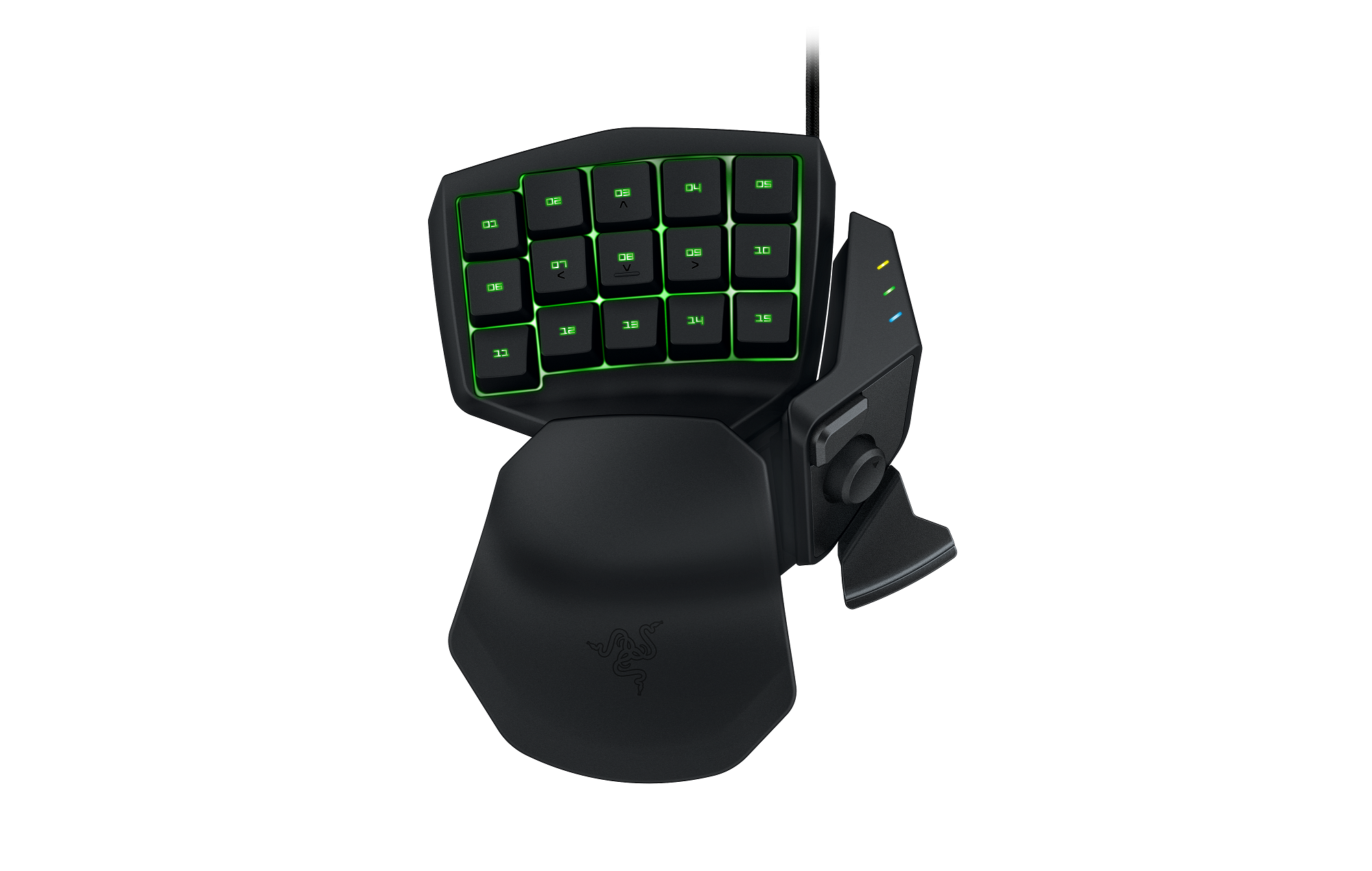 Unboxing the Razer Tartarus Chroma revealed a simple package: the device, some printed information, and the notable Razer stickers. The Tartarus Chroma has three distinct areas consisting of a keypad, thumb controls, and an adjustable wrist rest. The USB cable is incredibly lengthy and has that familiar Razer-braided cable. From afar, this looks like an updated Powerglove, except that you don’t wear it and there’s no Fred Savage to be found. Jokes aside, it’s got a great look and style that has a lot of functionality.

The keypad has an array of buttons in a 5×3 grid. While these keys aren’t mechanical, they feel firm, yet soft while supporting anti-ghosting. Though, mechanical keys would certainly improve this keypad, but then the cost of the Tartarus Chroma wouldn’t be so affordable as a result. The underside features some anti-skid pads that really holds it in place. With “Chroma” in the title, it now benefits from being able to use 16.8 million colors just like Razer’s other Chroma devices that have come out. While it doesn’t feature a wide array of options, you can modify the static color, set a breathing color while alternating between colors, or have it cycle the spectrum (the option I chose). I struggled to figure out what I was supposed to do with the Tartarus. Going through the Razer Synapse, I saw that there was a World of Warcraft add-on, a game in which I don’t play was available. But there weren’t any others. So my first inclination was that this was geared towards MMO gamers, which isn’t inaccurate, but not the whole story. Now as far as MMOs go, there was a lot to be comfortable with in Star Wars: The Old Republic and Guild Wars 2. I then found wonderful uses of it in FPS games like Counter-Strike: Global Offensive, Wolfenstein: The Old Blood, and Arma 3 to name a few. And finally, I tried an RTS like Company of Heroes 2 and was met with positive results. The ability to remap keys for different games and genres allows for a lot of flexibility.

Remapping keys happens within Razer Synapse, a cloud-based program that works across all Razer devices. The default keys found on this keypad line up with what you find on the left side of a traditional keyboard, involving QWERT, ASDFG, and ZXCVB keys. You can assign macros or other functions to these keys to serve your purposes, and then switch from 3 different mappings. There’s no doubt there will be a learning curve, especially right after changing a button’s functionality, as you have to memorize keys all over again. But with such a close cluster of buttons, moving functions and keypresses to one general area will no doubt improve your gameplay, as it did mine.

I find that the Razer Tartarus Chroma is a real benefit for gaming laptops, which has less than stellar keys, and the keypad would give you a nice advantage and lots of comfort. In desktop gaming, provided you have the room, is a nice addition, but feels weird when you have a full gaming keyboard to use. I’ve even found some applications for this with couch gaming, adding a bit of extra control that a gamepad doesn’t provide.

In a surprising twist, I found it extremely comfortable to rest my hand and wrist on, especially in long sessions in FPS, MMO, MOBA, and RTS games. And on a comfortable resting position over a regular keyboard where it is nonexistent. I can see this as an aversion to getting carpal tunnel syndrome. While there would need to be some science and research to this, in my personal experience, I found this to be true. I felt good at after extended plays.

Razer’s Tartarus Chroma is a surprise hit with me. I expected that it was an extraneous accessory that would only appeal to niche audiences within gaming. What I didn’t expect, was to recommend this wholeheartedly for those serious about gaming who do play for extended periods of time that want that some comfort and rest that a mouse provides, but within an ergonomic and competitive gaming keypad. While this isn’t something you need, but the Razer Tartarus Chroma is something you’ll want.

This hardware unit was provided by Razer for review purposes