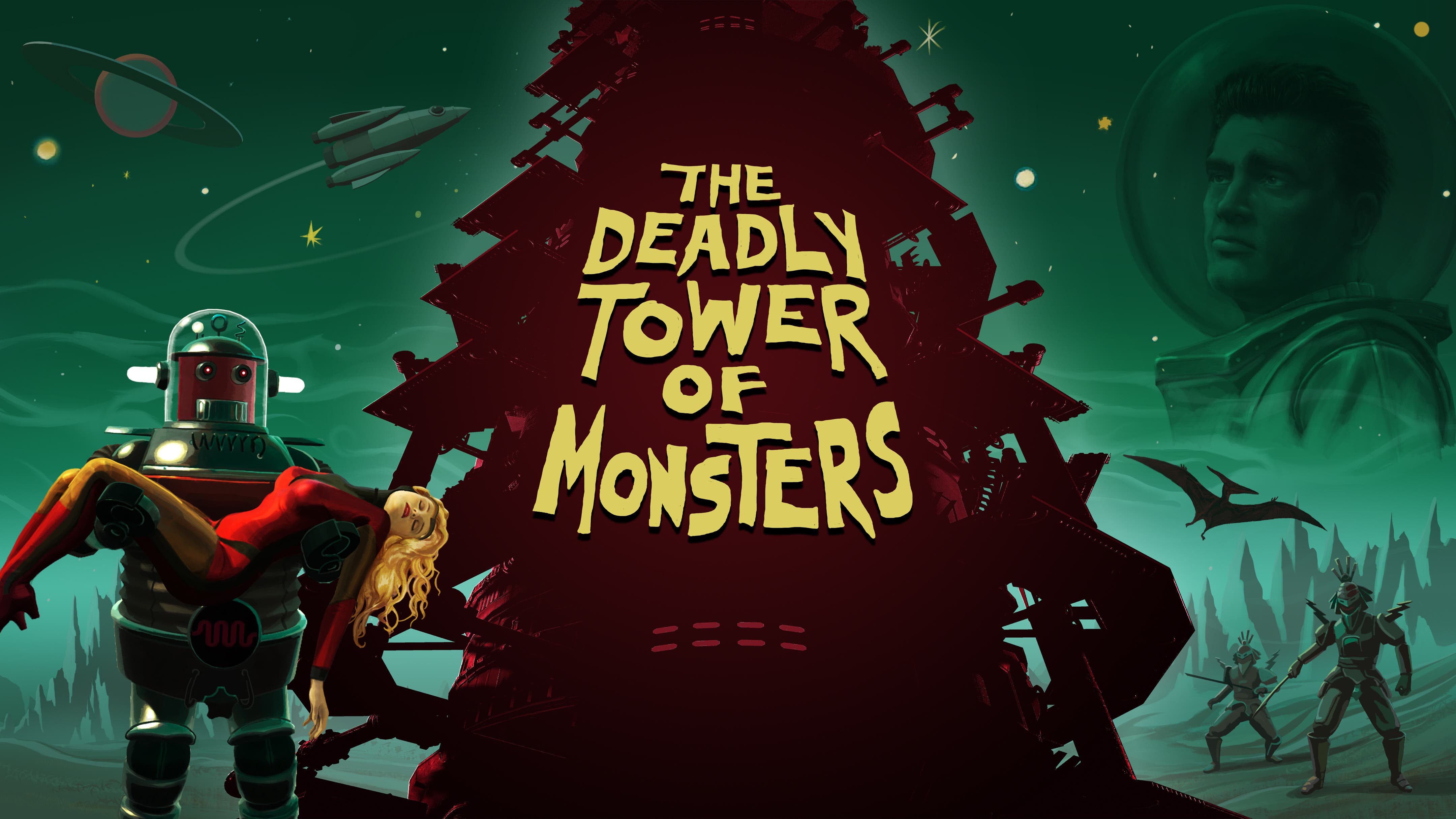 The Deadly Tower of Monsters Review

The cast in The Deadly Tower of Monsters is on-par with what you would expect to find in an old sci-fi film, the male hero Dick Starspeed, the female heroine/alien Scarlet Nova, and Dick’s trusty Robot. This group bands together to take down the evil Emperor and save the planet Gravoria. To do this the heroes must climb, wait for it… THE DEADLY TOWER OF MONSTERS! BA DA BUMMMMMMMMM. If you’re familiar with the old sci-fi movie style, you’ll notice old sci-fi tropes mixed into the design giving the game just the right feel. Right from the get go, the menu screen with its 50s poster design and our dashing hero and robot sidekick teaming up come to mind. Thanks to these tropes, I found myself smiling and chuckling often. The game looks the part too, you’ll find characters that look like they are inside of costume suits, old stop-motion animation for some enemies, strings holding props in the air, and even cheesy looking stunt doubles that will take place of the actors. Speaking of the “actors”, they are even hamming it up and nailed the feel of those older sci-fi flicks. If that wasn’t enough to make this game stand out, ACE Team have gone and framed this whole experience as if you’re watching DVD commentary from the film’s director, Dan Smith. So throughout the game, you’ll gain insight into “behind the scenes” information about the actors, design decisions, and random facts about the making of this “film”. The director’s commentary is good and can be quite funny, which in itself, comedy in games is difficult to do. The DVD commentary ends up also serving as the narrator for you adventure, giving you hints on areas and whom or when you can access them.

There’s a lot to explore in the game thanks to the very large tower that you climb. The entire game has you scale this very tall tower, from ground level all the way up into the atmosphere. You’re constantly reminded at how tall this tower is; look down from the edge and you see everything. One of the game play mechanics has you shoot straight down and it’s then you realize how high you’re actually up. There is no cloudy haze to hide anything either, you’ll even be able to see the exact spot in which you started the game from. The game plays a bit with that mechanic as well; there are some rings you can collect by skydiving through and targets you can find hidden on the tower that you’ll only be able to see by looking down. If you do happen to fall off the tower unexpectedly, the game throws you a bone. You can instantly teleport right back to the spot you fell off of if you’re mid fall, you can teleport yourself to checkpoints that you have already crossed, and you get a slight hover to your jetpack so that you can make a soft landing. Thanks to these safety nets, the platforming becomes less bothersome. Since you’re looking down in an isometric view, it can be a little hard to gauge where your jumps will land. Thankfully the controls are tight and you get the aforementioned safety nets just in case you do screw up.

I was surprised at the combat; it’s very simple but very fun. There are no combos, heavy, or light attacks to deal with; just a melee option or a projectile one. There are a variety of weapons to equip you with as well; each one slightly different than the others. You’ll find more variety in the guns since you’ll have things like rockets, lightning, or even a phazer to choose from. Some enemies are strong or weak against certain weapon types so there is that to watch out for too. Your melee weapons aren’t as varied but visually are different. From large sticks to lightsabers, you can choose which you like best and still be fine using it. You’ll be able to upgrade your weapons and player bonuses throughout the game with gold and tokens that you’ll collect, giving some progression that you can customize your game by. Each playable character even has special skills only they can use to advance or even unlock special items.

This is where my first set of issues crop up. I did not particularly enjoy being forced to use one character over another while playing. I would end up hitting a roadblock because the character I had currently selected wouldn’t have a skill needed to progress past some blockade. This caused me to backtrack and find the closest character selection tube to change characters, and then walk all the way back to where I was blocked. This wouldn’t have been so bad if I could have changed on the fly, but forcing me to backtrack is never a good time. Even though you can teleport to any checkpoint, they felt miles apart from one another. You can spend a few minutes going up the tower, not hit a checkpoint, die, and have to start that whole section over again. Annoying? Yes. Does it ruin the game? No. All-in-all these were pretty minor issues alongside a really fun and funny game. The Deadly Tower of Monsters surprised me and had me coming away satisfied. The gameplay was enjoyable and having that director drop hot knowledge about the behind the scenes of his movie added such a great atmosphere, it was difficult to stop playing.

A pre-release Steam key was provided for review purposes.