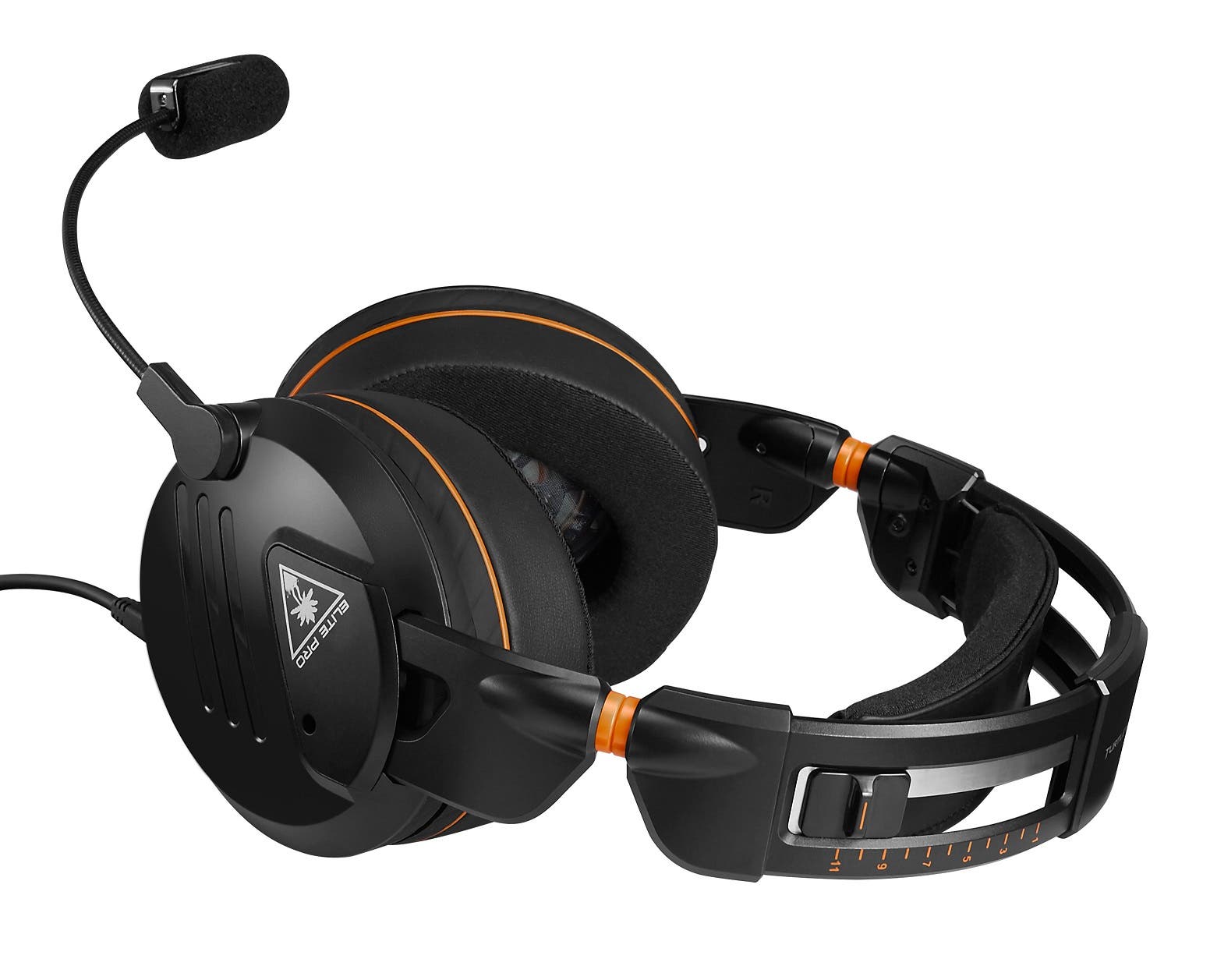 Turtle Beach Elite Pro Tournament Gaming Headset is a stylish looking headset that is specifically aimed for professional gamers, streamers, and those deemed hardcore more than the everyday gamer. Though this headset shouldn’t exclude the everyday gamer who wants top-tier audio in a quality headset – just know there’s a hefty price tag associated with the great audio you’ll be getting in return. Turtle Beach’s Elite Pro Tournament Gaming Headset is an expensive auditory experience that is incomparable with other headsets today. Turtle Beach’s Elite Pro Tournament Gaming Headset works across any platform, from Xbox One to PlayStation 4, PC, and tablets / phones. The packaging is all compartmentalized and labeled for easy understanding of its components. The headset includes a quick start guide, and it helps you to set it up for any system you intend on using it on. There are many cables for the headset, but it is intuitive to assemble and use. It is pretty much plug and play on any system you’re using. Its simplicity for delivering complex audio is a joy to work with.

The headset itself has one feature that is near and dear to my heart: having adjustments for those who wear glasses. You can remove one of the pads on the ear cup and adjust the tension on the cup to release pressure on the side of your head where your glasses rest. The ear cups rotate and fall flat when around neck or when you put it down. While the Elite Pro Tournament Gaming Headset looks heavy duty, it is anything but heavy. It is absolutely comfortable to wear for extended periods and the headband has actual adjustments that are marked for reference and to remember. I tested games in which the sound plays a pivotal role in its presentation, and the results were astounding. Playing Battlefield 1 with the War Tapes audio toggled on produced horrifying sounds of screams far away and was able to detect the location of gunshots with ease. Titanfall 2 is similar, but footsteps play the largest role here whether they are a pilot or the hulking titans, the distinction and specificity of the noise helped me edge out the competition. Dishonored 2 has some great ambient audio effects that help the visuals, and hearing the voices of distant conversations, enemy footsteps, and even blood-flies with the Dolby preset for footsteps were crucial to maintaining a stealthy playthrough. DOOM on the other hand is anything but subtle. The game’s brutality and violence of its sound effects and soundtrack only ripped and tore at my ear drums for putting a smile across my face as it was crisp and punchy. The Witcher 3: Wild Hunt is a game that’s known more for its visual splendor, but its audio is no slouch, from the soundtrack to the outdoor environments and even transitioning to a busy tavern, there’s a lot to enjoy here. It seems strange to say, but I’m even hearing new things in Planet Coaster. I was able to hear every part of my park in motion, and is such a pleasure with its upbeat score. The standard microphone that comes with the Elite Pro Tournament Gaming Headset is clear and an improvement over the Turtle Beach EAR FORCE Z SEVEN microphone that I had been using. From friends, I was told that my voice was coming through clear and there were no issues with my lows and mids. In recording I sounded as clear as ever, something streams and future commentary videos will benefit from. There is an Elite Pro Tournament Noise-Cancelling Microphone, but I was not sent this for review, so I’m not sure how it compares to the one included here. A hardware unit was provided by Turtle Beach for review purposes.