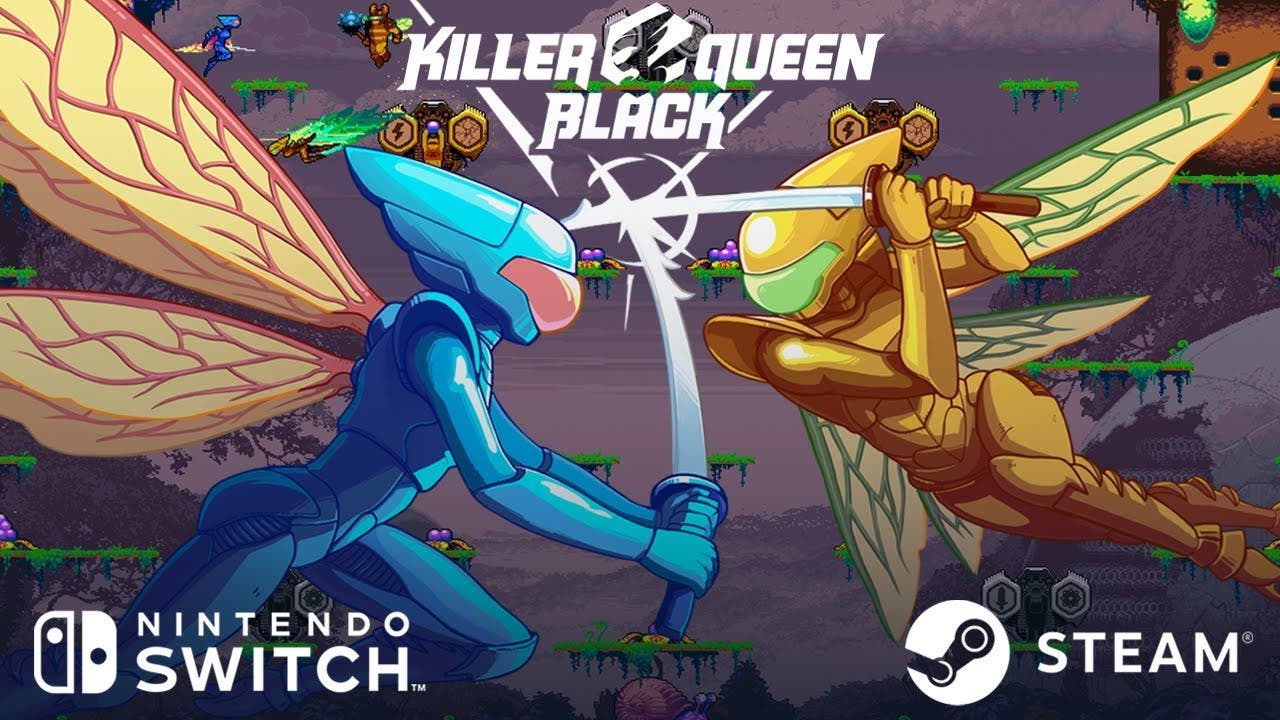 After millions of play sessions upon its explosion onto the arcade scene in 2013, Killer Queen is back in black with a new Glam Rock-inspired 16-bit pixel art-style and similarly-themed ‘80s metal tunes. BumbleBear’s Nik Mikros and Joshua DeBonis, the original creators of Killer Queen, have fine-tuned the experience with new mechanics suited for home play. Up to eight players split off onto blue and gold teams ready to fight for their hive.

One player on each side takes on the role of the Queen, and the others play as drones. Cunning reflexes and keen tactical planning are the key to reigning supreme over opponents. Each team’s Queen starts armed with a stinger to defend herself and attack the contending team. Be wary when controlling her, as her dangerous attacks and heightened agility come with the trade-off of limited lives.
Drones are the best units for the job when it comes to completing non-violent, game-winning objectives. Though drones begin unarmed, they don’t have to remain defenseless for long. Gates on the map empower drones in exchange for berries, transforming them into warriors with flight capabilities. Depending on which gate the drone enters, they gain powerful upgrades such as speed boosts and new weapons, including maces, lances, swords, shields, and laser rifles. But bee careful, as the Queen simply needs to fly over these gates to claim them for her team.

Three types of victory and a sky-scraping skill ceiling mean each match offers near-infinite permutations to persevere and complications to conquer. Economic Victories require drones to scoop up berries on the battlefield and bring them back to their base faster than the other team. Snail Victories involve slowly riding the snail on the bottom of the screen into a goal post, hoping that other team members ward enemies away. To earn a Military Victory, the adversary’s Queen has to be slain three times, making warriors highly sought-after.

Killer Queen Black has four game types: Quick Matches for those eager to leap into the fray, Ranked for those who want to rise to the top, Custom games with adjustable rule sets, and Arena. Arena requires a ticket to enter, earned through victory or purchased via in-game currency, and tasks players with going for victory streaks that earn awesome rewards. A notch is added to players’ swords for every victory, and reaching 100 earns them a fancy sword to brag about. Liquid Bit plans to continue supporting the game with additional maps post-release.

At any given time, there is one single “Black” team. Any team that defeats the Black team dethrones them and becomes the Black team themselves. Liquid Bit hopes to broadcast these fierce competitions and encourage the Black team to remain a constantly-shifting, coveted position.

“As lifelong arcade-goers, the phenomena that Killer Queen has become has been incredible to experience,” said Matt Tesch, co-founder of Liquid Bit. “Bringing the game to Nintendo Switch and PC is surreal and we’re eagerly anticipating watching new competitors battle for the Black team.”