Aces of the Luftwaffe – Squadron Review

Aces of the Luftwaffe – Squadron from HandyGames is the World War II arcade shooter, re-imagined. Being more than just a shooter, it has elements of bullet hell, RPG, and adventure all rolled into one. It sounds like it would be a mess, but it is all compartmentalized and handled well. This is a fresh take on the genre with some new ideas. Aces of the Luftwaffe – Squadron has depth and replayability for solo and for couch co-op players.

In a fictional tale, it is the mid 1940s and the United States is at risk of losing the war. And the Aces of the Luftwaffe are here to save the day. This is what I’d call a tactical shmup, even though combat occurs in real-time. The bullet hell is here, but is a bit slowed down. This is also a game where serious meets silly; every German is a kraut, UFOs, zeppelins, and crazy bosses to top it off. Then, the seriousness comes in with loss, grief, and people who’ve been gassed by mad scientists. Given its tonal swaps, it balances them well enough that neither are heavy handed or inconsiderate.

As the name implies, Aces of the Luftwaffe – Squadron, has you flying in a formation of four pilots, each unique to one another, to include the plane they’re flying. During each mission, there’s always a crew member that gets sick or injured due to one reason or another. And honestly, this is the most annoying part of the game. Given it happens on every level except the last few, the frequency makes it so ridiculous. I can see the challenge it offers, wish that was toned down. Thankfully the best part of Aces of the Luftwaffe – Squadron‘s structure is not in the main missions, which is to complete it without running out of lives. It is the side missions that take center stage. You’ll have a variety of mission types which ask you to simply survive, stay stealth, destroy a specific number of targets, or save a number of allies. These missions drive your score up, as well as unlocking skill points. Along the way as you kill Nazis, you’ll be collecting medals like the Raiden series. Also will be supply crates that contain power-ups. These power-ups increase your overall damage output, but are limited ammo. The game does good in making them last, but it’s good to be cautious on how you spend it. 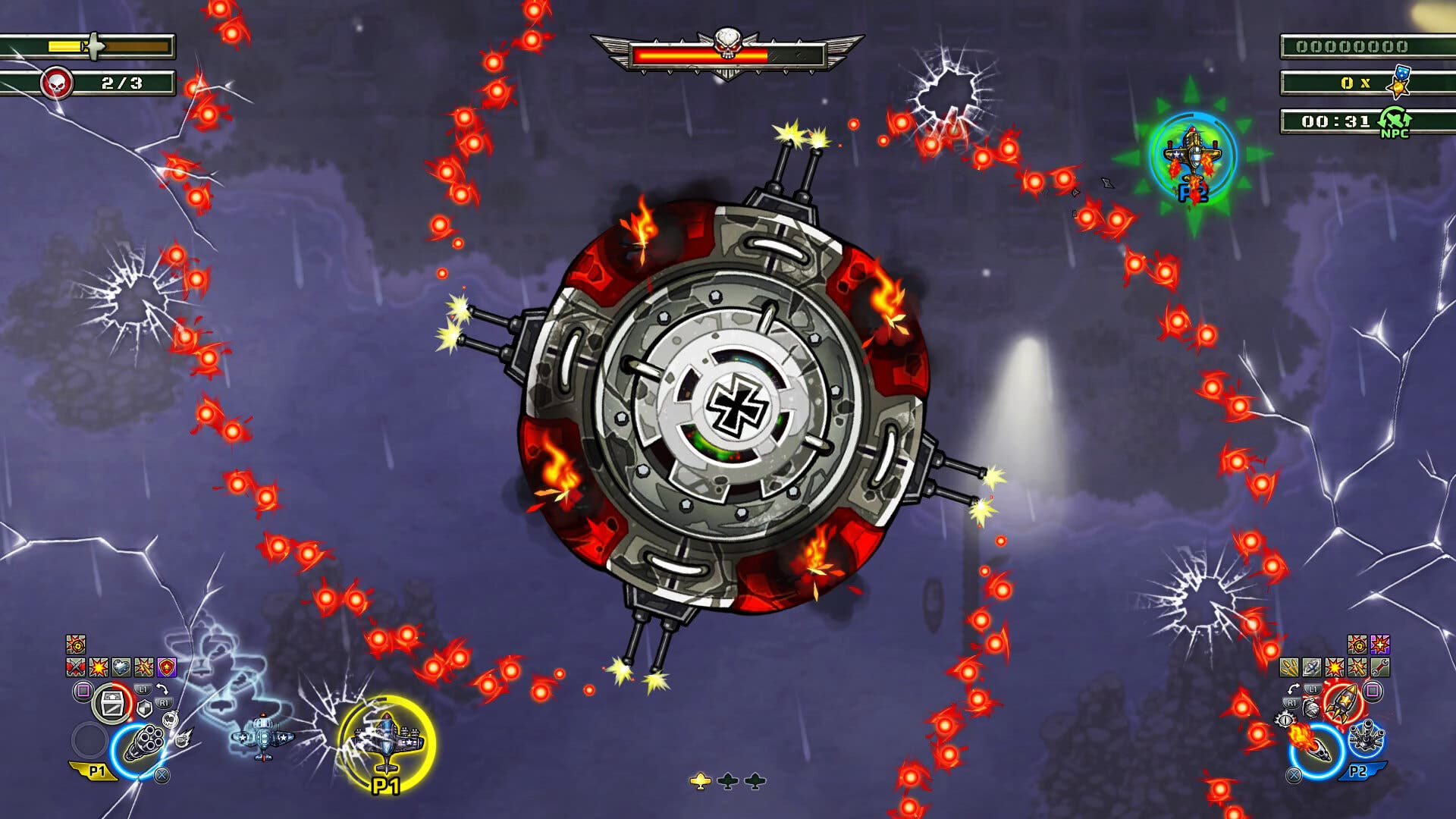 The aforementioned skill points are earned by finding hidden crates in a level, but also earned through leveling up in which side mission completion gives you extra experience, as well as unspent lives. Skill points are spent on active and passive abilities. The active abilities can actually be setup like tactics in an RPG where the AI will perform certain actions based on priority and the number of enemies on-screen. This level of depth makes it so every ability and pilot all work off of each other.

As you continue to play the game, you’ll unlock blueprints which add more planes to your arsenal. Each plane is wholly unique, and has advantages and disadvantages. You can get by on the normal difficulty without swapping them out, but higher difficulties almost require this level of decision making. The core difficulty of the game ramps up, to match planes and skills that are unlocked. The final chapter is where you are truly tested, and there’s a chance you’ll need to revisit stages to level up your squadron to be more tactically ready for battle. 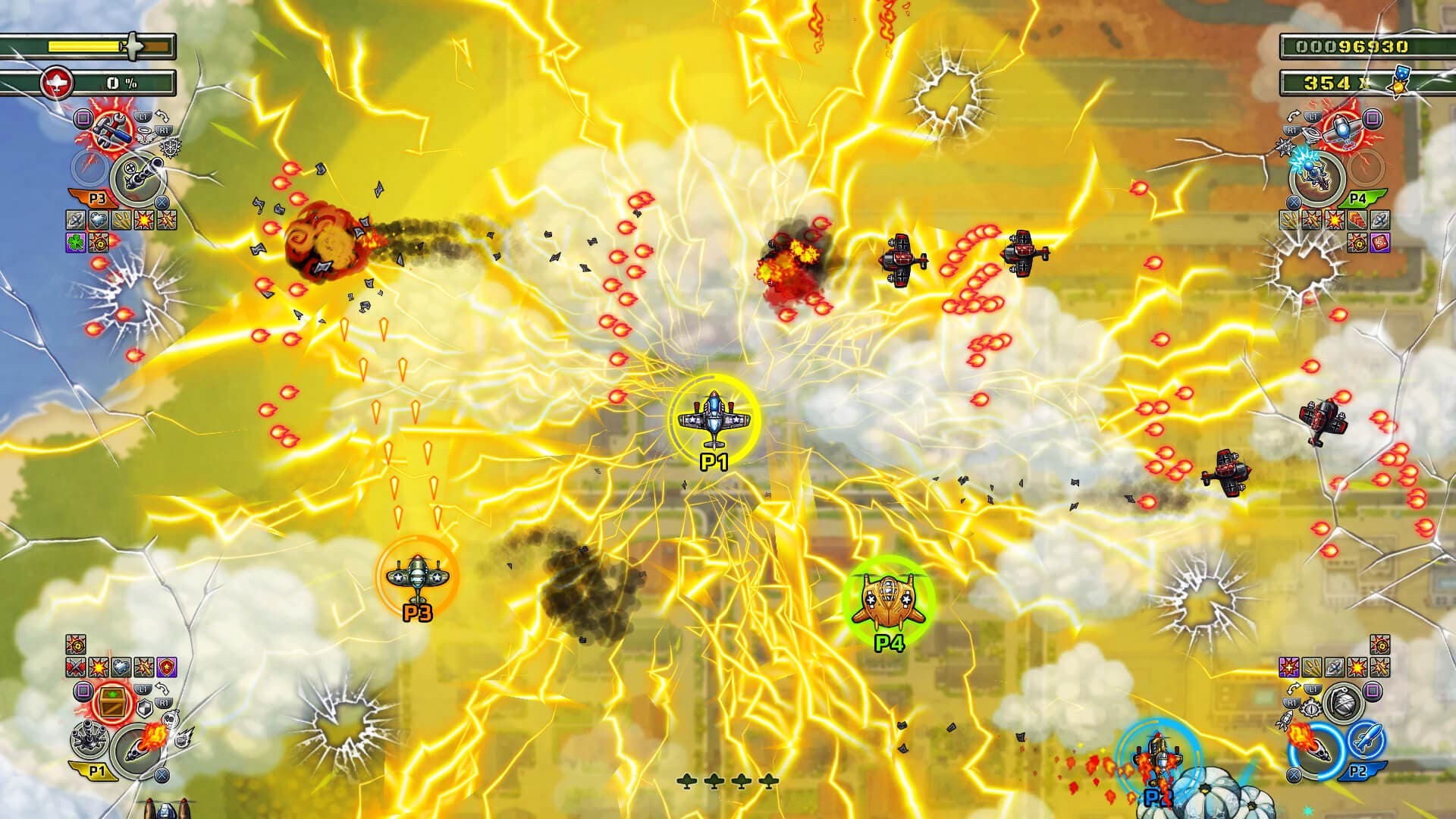 Aces of the Luftwaffe – Squadron has 25 levels across 5 chapters with bosses capping each chapter to keep you busy. There’s an extra boss thrown in mid-chapter before you reach the end. But the bosses are wonderfully and classically designed. They all are a standout for their own reasons, have extreme personalities, have a set pattern, and feel rewarding when you get closer to toppling the regime. They are also tough to beat the first time. A downside to this, is death on a boss means having to try to skip the same cutscene over and over again. This, is least than ideal but not a dealbreaker. It just would be nice to have in an upcoming patch.

I love everything about the look and sound of Aces of the Luftwaffe – Squadron. There’s a crisp art style to the game, with some solid voice acting. In line with the rest of the game, it’s a bit cheesy both in the lines and the delivery. In playing the game, damage taken creates cracks on the screen to inform the player of damage, as well as accompanying sound effects. The cutscenes are well animated and the game is just so fun to see in motion.

Aces of the Luftwaffe – Squadron won’t blow you away, but its variety and co-op gameplay will have you coming back to best high scores. HandyGames have made a game that feels like classic arcade gameplay but on modern systems. The achievements keep calling the campaign “Allied campaign”, so I’m hoping there’s DLC in the works for an “Axis campaign”, or something that is added to the game to play more. Aces of the Luftwaffe – Squadron should be in your library.