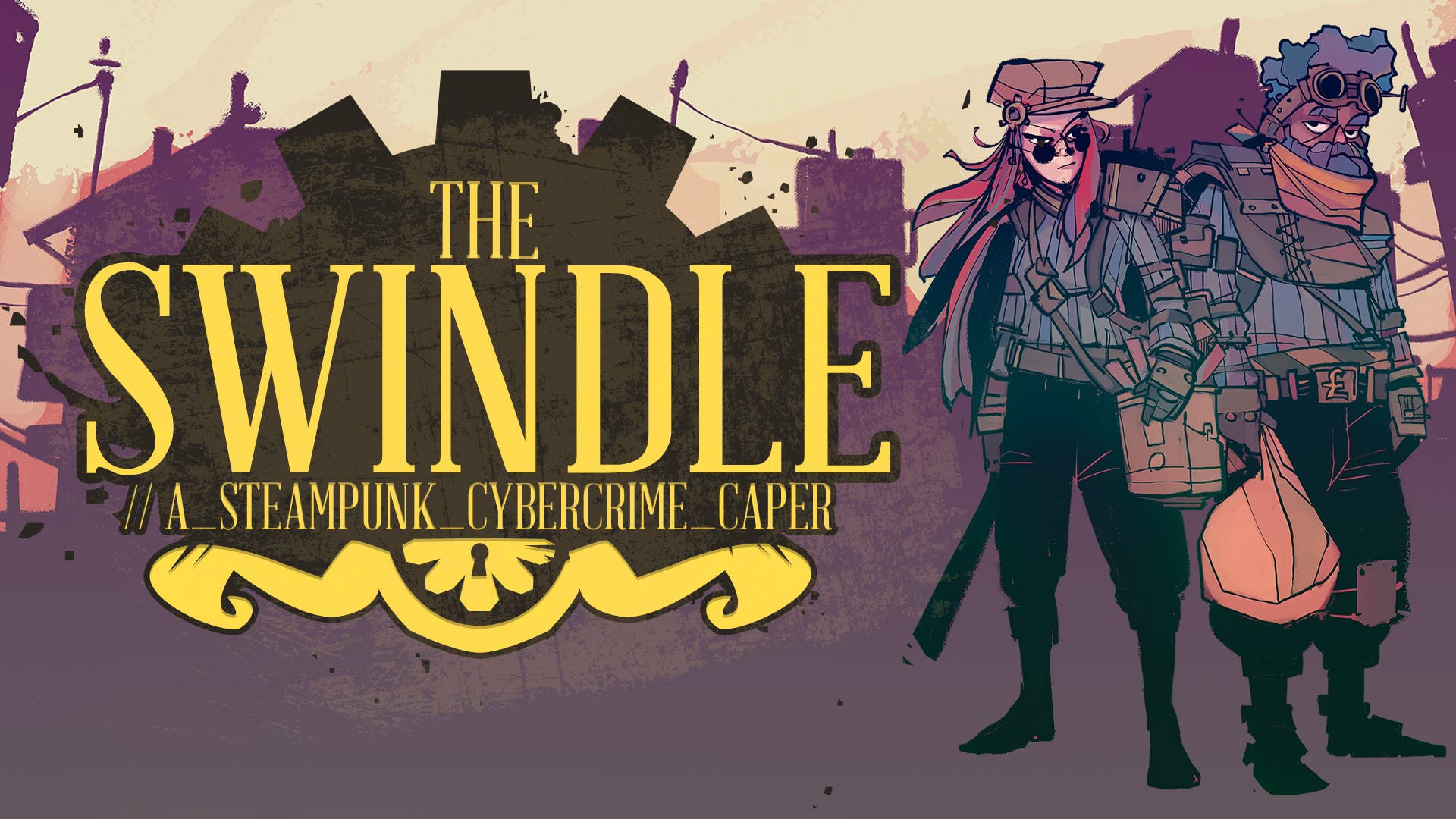 The Swindle is one of the more recent indies to find its way ported to Nintendo’s versatile system and on its surface, it seems like a good fit for the platform. If you’ve not played before, you play as a thief robbing your way across a steampunk-stylized Victorian-ish era London, seeking to amass more wealth with each heist so that you can purchase more tools and skills so that you can steal more things so that you can afford to enter districts with bigger scores, and so the loop goes. 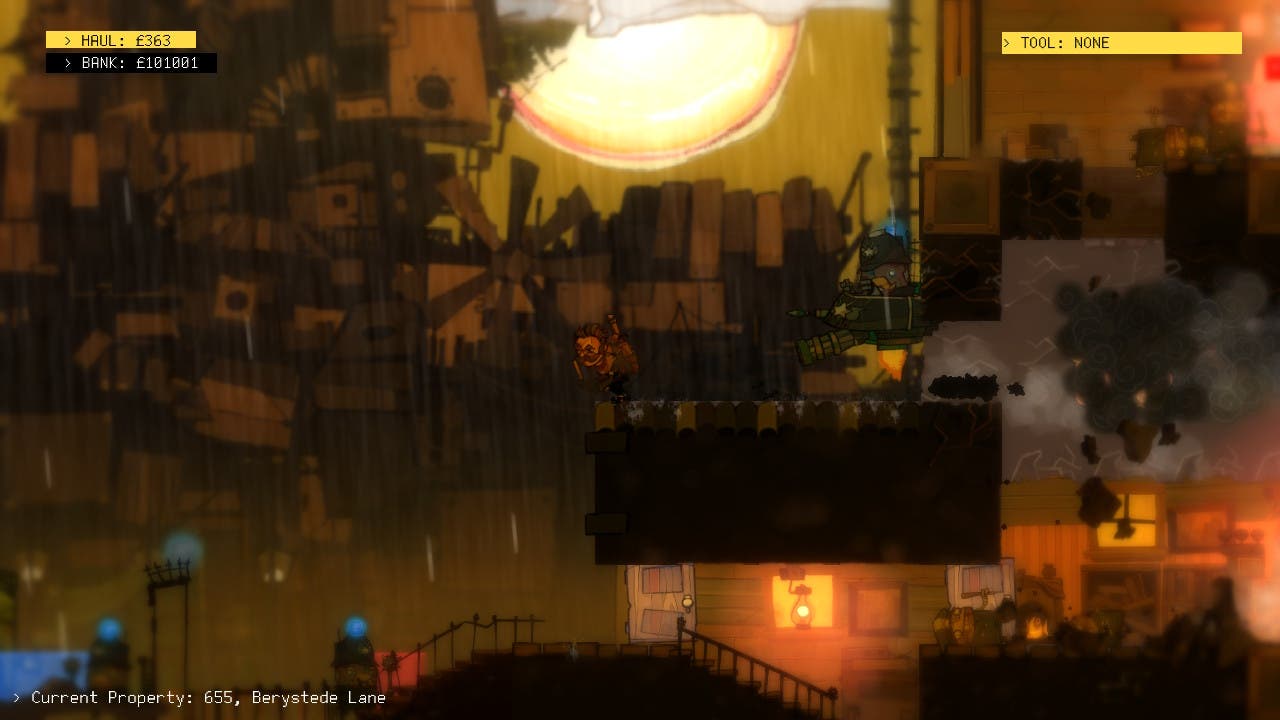 Each heist plays out as a randomly generated level in the particular neighborhood you’re in, fortified with security measures like guard bots, cameras, alarm systems, drones, traps, et cetera. The level of security and level complexity increases as you complete heists and purchase upgrades. Trip the alarms or get spotted and the whole place goes on high alert. If the alert status stays active long enough, cop-bots show up to patrol the exterior, making your escape more difficult. The benefit of the levels increasing in size fairly quickly is that the amount of your hauls starts to go up relatively early too, so that upgrades which seem daunting to purchase at first become attainable in short order, and suddenly you’re double-jumping and dynamiting around with near-reckless abandon. This is all good, as progression through the game is tracked primarily via the skill tree.

Overall, the core conceit of the game works well. The loop works well across levels and does a decent job of keeping your momentum up. The actual levels themselves are varied in terms of their degree of challenge and the sense of reward you experience. Many early levels are understandably easy, as you are getting familiar with the systems and learning how the game works. And while they do start to become more interesting, I often felt that the sense of accomplishment was diminishing after each heist, which is the opposite of what you would generally want. 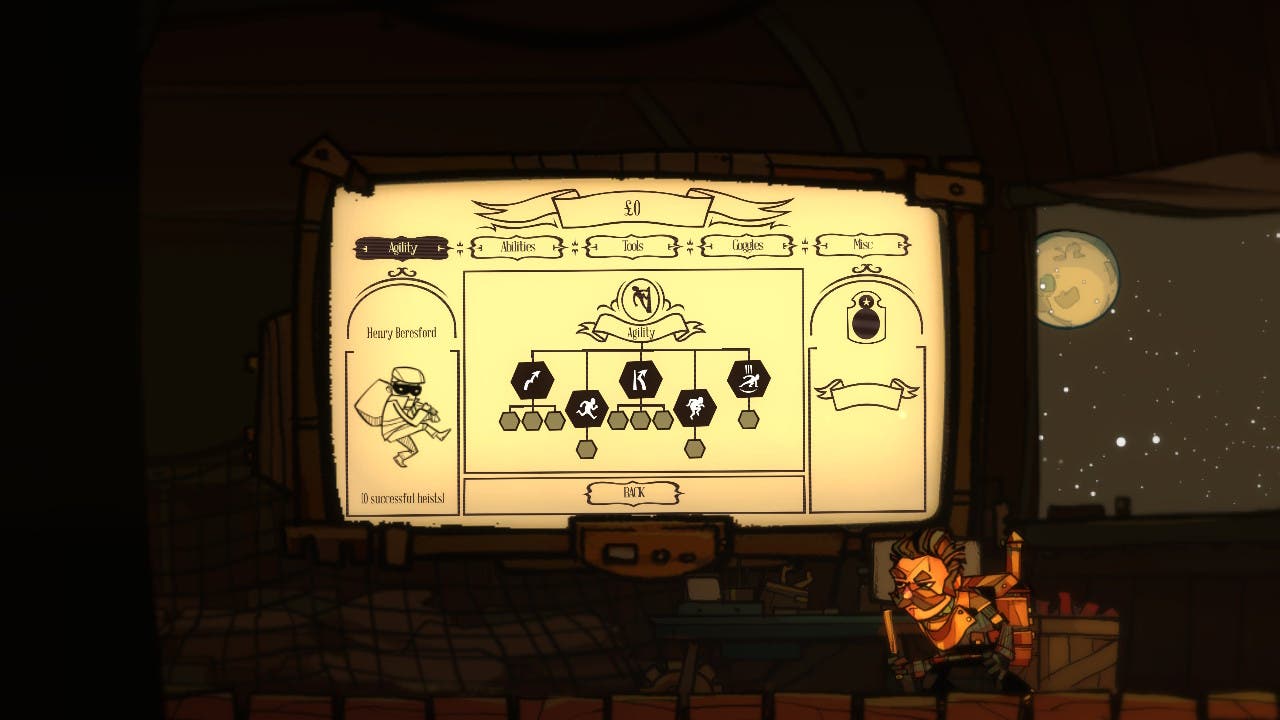 You aren’t just unlocking things for the sake of unlocking them, though. You have 100 days from the start of the game (each heist eats up a day) to flesh out your skill tree as much as possible before heading into a final “showdown”, one last big job which will either make you or break you. I encountered a number of levels where it seemed like the game was just adding more bots and drones to rooms to arbitrarily increase the “challenge,” but in reality this just meant more time spent observing patrol routes before picking them off. Dynamite and other tools can be used to clear rooms out more quickly, at the risk of alerting other nearby guards with noise. I usually enjoying playing things more stealthily, so this effectively closes some of the game’s tools off to me.

Even with the right tools in hand to pull off a clean heist with no alerts, I often found myself feeling like the challenge I wanted wasn’t there. Most levels boiled down to either a perfect score or a frantic scramble for loot set to the sound of blaring klaxons, trying to outmaneuver the cops while making a run for my ship. The latter scenario usually ended up being the more engaging of the two, which I’m not sure was intentional. The challenge in those cases comes from getting out alive; if your current cat burglar croaks during the mission, you lose any money you nabbed during that run, which effectively means you’ve wasted a day, and so there emerges a balancing act between getting as much cash as possible while also not putting yourself too much in harm’s way. In theory, it should self-balance, but in practice I found things to swing really hard toward being very easy or very likely to result in death. 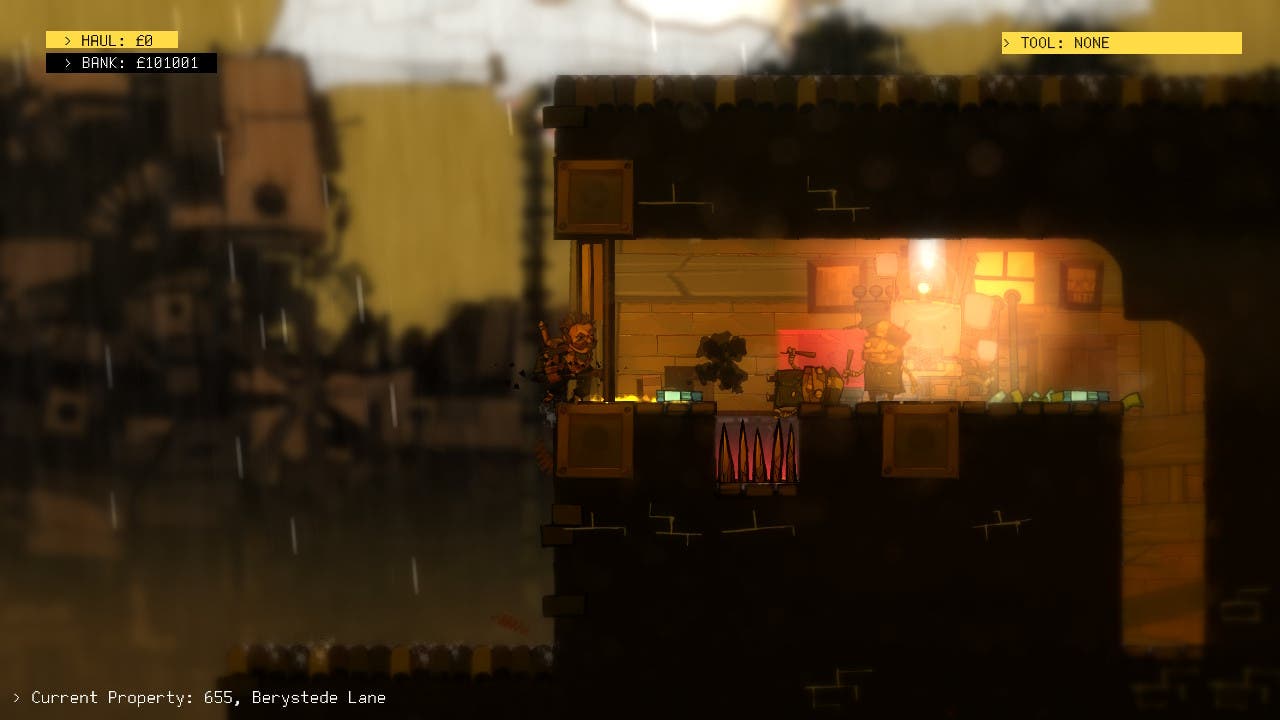 I do really enjoy the art in this game; the sprites and the levels all have a nice hand-drawn appearance and a warm color palette that suits the vibe the game is going for. Additional character is provided via some really great names for your robbers and the streets where your pilfering takes place. The character designs are excellent, providing the paradoxical appearance of being very meticulously planned and well-manicured while also being hastily thrown together and in danger of losing everything at any moment; this is true of both robots and humans. The music is lovely and the sound design is good, with well-defined unique effects that are crisp and, again, thematically appropriate. These elements give the game a lot of personality that it benefits greatly from in terms of overall enjoyability.

When considering this specific port of the game, however, I have some complaints. It is generally fine in docked mode, and more or less indistinguishable from how it runs on other systems. That said, handheld mode is my bread and butter with the Switch and represents how I spend most of my time with the system, so how a game looks, plays and performs in that mode is hugely important. 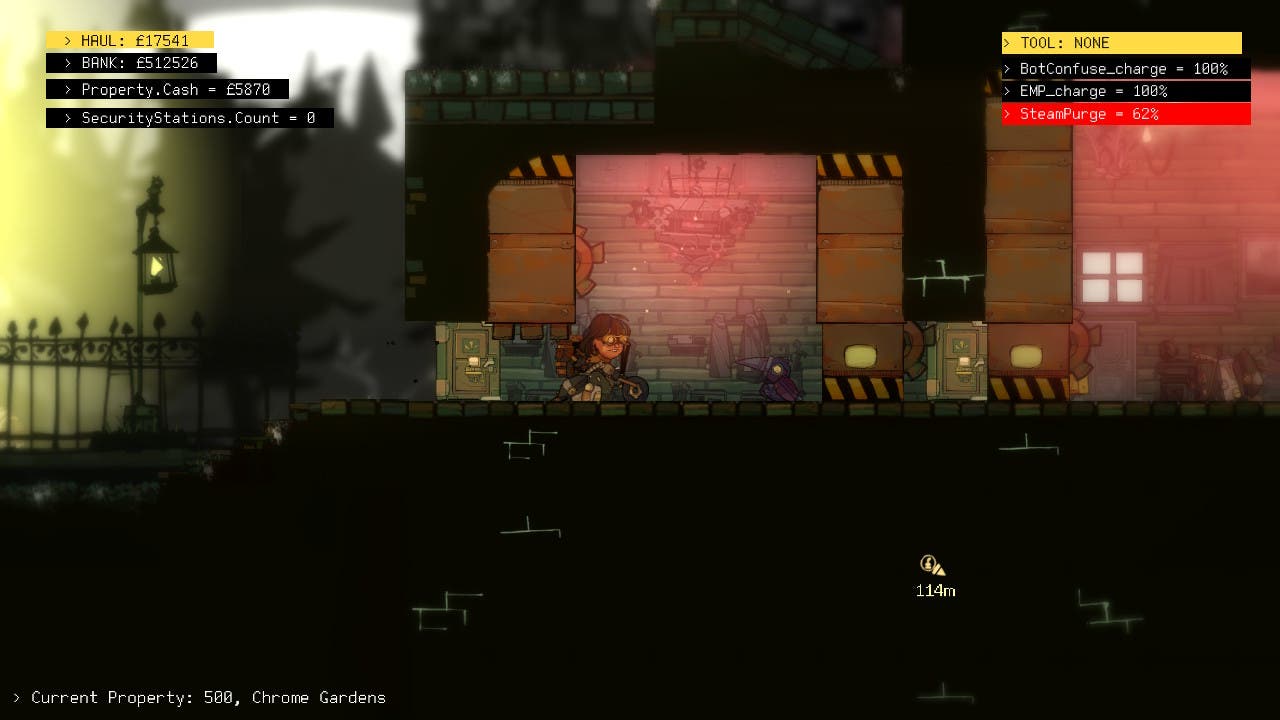 Overall I find myself surprised by the game in handheld mode, and unfortunately not pleasantly so. The UI can be tough to read, though in the interest of fairness this is a relatively common issue with ports to the system. More importantly though, I was disappointed to discover the game is capped at 30fps in handheld mode. For a game which is largely two-dimensional in nature and doesn’t appear to have complex simulation going on, this is simply odd, especially in comparison to other third-party titles I’ve played on Switch which run astonishingly well.

The game’s overall design does lend itself well to playing on the go, as you can knock out a few levels on the bus and put it back in your bag to pick up again later, but I honestly don’t know that I’d recommend playing it this way. 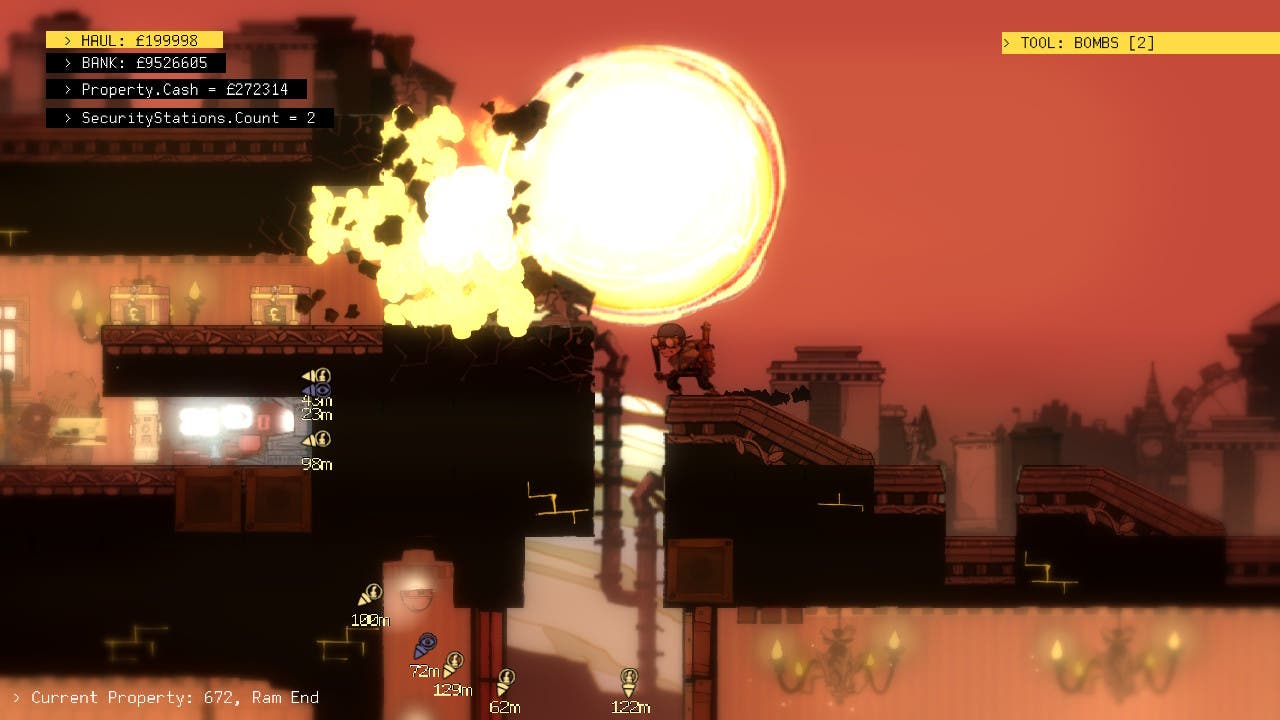 I think my largest issue with The Swindle is not specific to the Switch release at all. I felt early on that I was seeing most of what the game had to offer up front, and hoped that I would be proven wrong as I played more. However, the game does kind of tip its hand within the first hour; you know early on that you’re going to be purchasing upgrades, and that levels are going to get bigger and filled with more countermeasures, and unfortunately none of that increase of scale or complexity really serves to do anything apart from give you larger levels to traipse around in without them necessarily getting more interesting.

This may not be a bad thing depending on what you’re looking for. The flip side of this is that the levels turn into increasingly large playgrounds in which to use your new abilities and tools, to the point where you are more than capable of thwarting any defense. It just often feels like progression for progression’s sake, which works fine in some games but just doesn’t click for me in this one.

The Swindle is an enjoyable enough game which I would probably rate higher on other platforms, but the additional shortcomings with the Switch version in handheld mode make it a little more difficult for me to recommend. If the technical issues aren’t deal breakers for you, and if you’re looking for something you can play in short bursts and which will let you progress quickly, this is a fine enough choice. If you can play it on another platform, I’d suggest going that route instead.