As the market and our personal catalogs are increasingly filled with games that are focused on being the pinnacle of realism or visual fidelity or artistry, the idea of what makes games fun can often get lost in the pursuit of other ideals. Rock of Ages 2, much like its predecessor, is thankfully not interested in being anything other than whimsically fun, presented against a backdrop of utter absurdity. There is indeed very little about the game which is rooted in reality, which is a refreshing change of pace from the endless line of military shooters and major visual showcases from big publishers. Are you interested in accurate combat simulations? Do you crave high stakes, competitive gameplay? 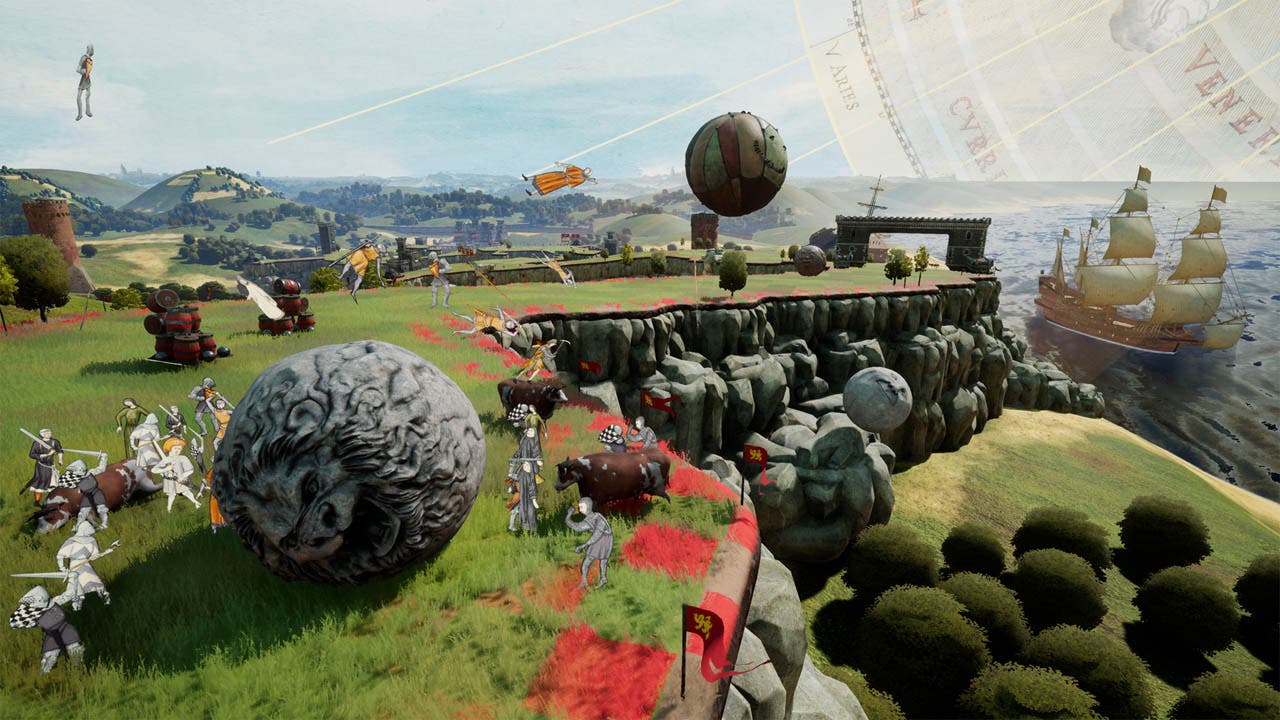 Rock of Ages 2 is, simply put, a joyful exercise in whimsical strategy and silly physics that will leave you chuckling more often than not. Don’t get me wrong, it can be very challenging to thread your giant boulder through a throng of trundling war elephants flanked by oblivious herds of genetically modified adhesive cows, but it’s not exactly the kind of scenario that leads to frustration. That part comes when you get through to the other side and a trap platform launches you off the track entirely.

Even still, it’s hard to do anything but laugh while you play. I’m not really particularly good at the game either; my defensive placements are generally ineffective and my skills with steering my angry-faced boulder o’ war are middling at best. Most of my battles have come down to the wire with me barely edging out a win before my opponent can knock my doors down. And frankly that’s all fine by me; I don’t have to be good at the game to have fun with it and to make progress.

If you’re unfamiliar with the series, you should know: this game is weird. Really weird, but _good_ weird. Each level is a battle in which you, playing as Atlas (as in, Greek God who carries the world on his shoulders) are on the run from God himself and are fighting your way across the world and presumably all of history, facing off against various war commanders, mythical beasts, historical figures, and the occasional animal from a surrealist painting.

Each encounter is kicked off by an animated sequence which provides some kind of foundation for the conflict at hand. These animations feel as though they’re plucked out of some ultimate remaster of Monty Python and the Holy Grail, both in their visual style and humorous sensibilities, and the effect is superb. It’s honestly impressive how consistently funny these sequences are and they provide some excellent tone-setting and weirdly satisfying justifications for all of the anachronous shenanigans. Once the vignettes are complete, you’re dropped into a level with two mirrored pathways of terrain that each start with a launching point for a freshly carved boulder and end with the opposing combatant’s fortress. 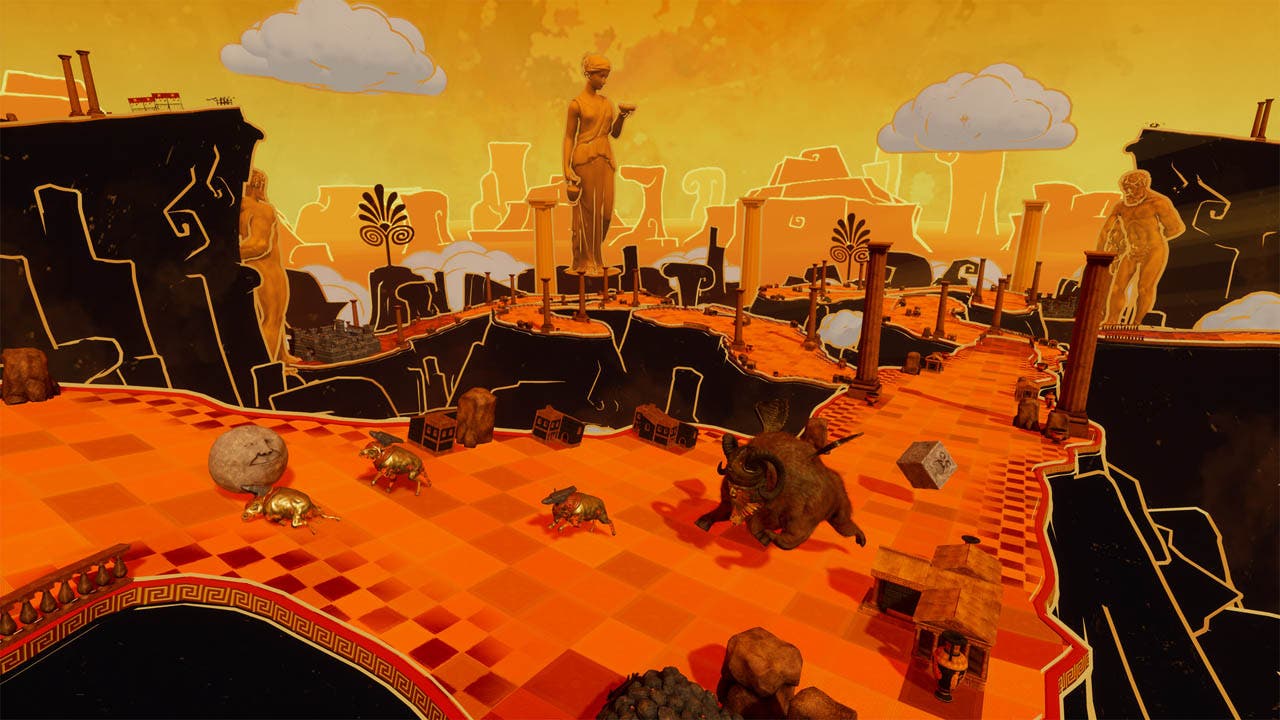 Your goal is to launch said boulder, steer it down the pathway while avoiding obstacles and staying on course to the best of your ability, keeping it as strong as possible so that you can slam it into you’re enemey’s gates with as much force as you can muster. Do this as many times as it takes, and on the final blow you get to roll inside, thrash their court, and give them a good squishing (complete with a satisfying sound effect). Oh, and of course you need to do all of this before your adversary can do the same to you.

This is where the strategic elements come into play; ultimately, this is a tower defense game, and as such you spend a good deal of time in the game placing defences along the pathway leading to your gates, with the goal of slowing the attacking boulder down as much as possible to buy yourself more time, and potentially even destroying it if you have the right equipment. You get to choose a certain number of gadgets to bring into each battle, with costs per unit increasing along with their potential effectiveness. In this way you can tailor your loadout to suit your playstyle, though early on your options are limited. 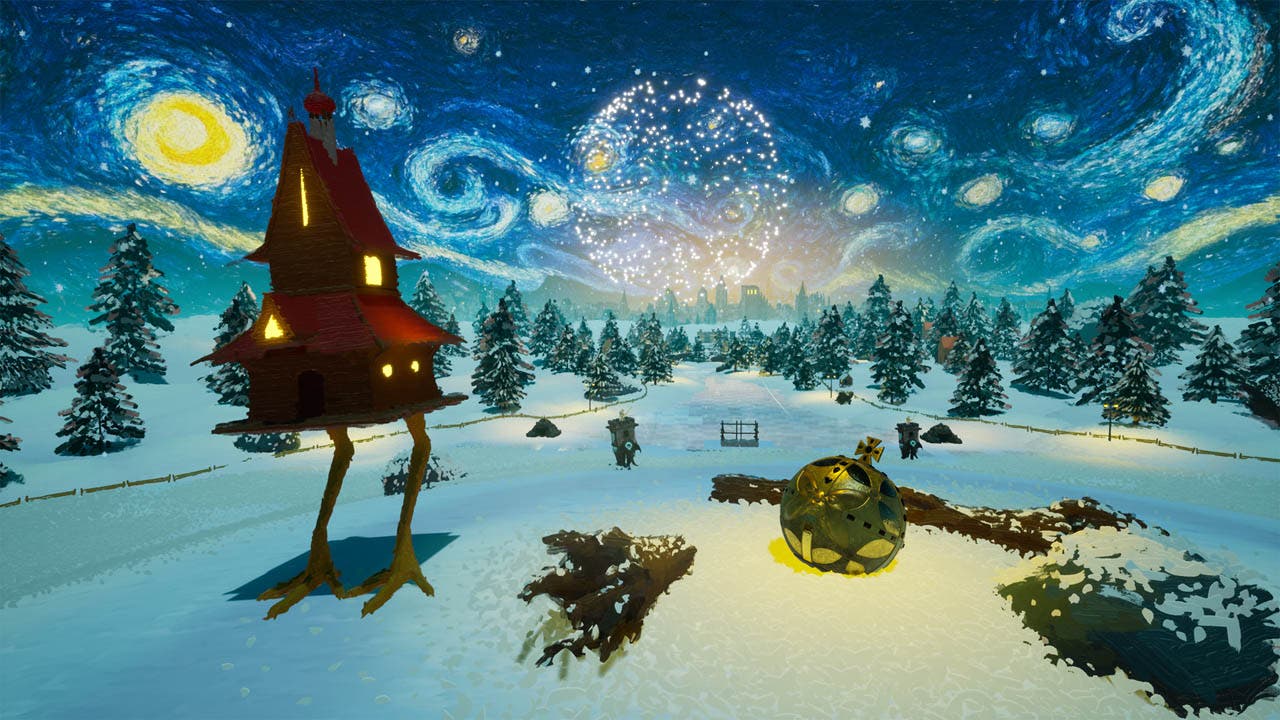 You’ll unlock more naturally as you progress and roll about the overworld map, and you’ll also unlock more slots over time so you can take more items into battle with you. Plus, each enemy you defeat unlocks their particular boulder for you to fight with, and as such you quickly find yourself with a selection of different boulders with unique designs and slightly different attributes (e.g. trading strength for speed). I have yet to find one that feels worth switching away from your starting boulder for, but you really can’t go wrong with any of them, especially if you just want something that looks cooler or more fun.

I’ve never been much good at strategy in games, and learning how to make best use of the tools at my disposal for a given map while under time pressure is often an uphill battle. What’s nice, though, is that the game has often given me good examples of how to be better by way of observing the tactics used by the AI, and in most cases that has been enough for me to turn the tide back in my favor. That the game gives you pointers in real time as to how to answer its own onslaught against you is a nice touch, because it keeps difficult encounters from being wholly frustrating, and you can take those ideas with you to future battles.

It is worth mentioning that the 3D visuals take a noticeable hit on Switch, and as such it is probably the muddiest-looking version of the game, however this is more or less to be expected when cramming a large-ish environment with lots of detail and some amount of simulation onto a small screen and a mobile-oriented CPU/GPU. The framerate is at least stable, and the game is absolutely playable, so you’re trading fidelity for portability on the platform, but it’s nothing game-breaking.

Overall, Rock of Ages 2 is a solid strategy game wrapped in a lighthearted package with a well-tuned sense of humor and some very well thought-out ideas. Whether you played the first game and are hungry for more, or are just getting into the series for the first time, Rock of Ages 2 will keep both your brain and your funny bone tickled.