Blazing Beaks is a fun roguelite dungeon crawler by Applava. You’ll get to choose one of 8 armed avians to adventure with, and explore randomly generated levels with random loot drops. It’s your standard fare when it comes to Rougelites but does it do enough to keep things fun? You don’t get many options in Blazing Beaks. There’s a Story Mode (which is playable in local co-op) and a Tournament mode. The Tournament is a more party style system, functioning similar to titles such as Towerfall. Blazing Beaks gives you five battle modes to choose from, which are different enough to keep things interesting. Unlocks for this mode are tied to your story progression, so if you want more, you have to play more.

The gameplay for Story Mode, as I’ve mentioned, is pretty standard. When I say Story, there’s no real narrative; it’s just the mode where you play floors in progression. You’ll collect coins, keys, items, and weapons while progressing to new floors. You’ll encounter secret rooms, shops, and boss battles along the way. You’re given a choice, randomly, at some levels where you have multiple exits. You could choose a boss door or maybe head towards the shop for a new weapon. You might find a regular door to progress to the next level to hopefully find a new item to help you in your boss battle. It’s all random, and it’s all decided by your luck. But to progress through the game, you have to defeat the bosses. The artifact system is interesting, some items do not benefit you to pick up. They’ll debuff you making things more complicated, they can reduce your damage, reload speed, remove abilities, or reduce the number of coins dropped till you get to a shop. Once you speak with the shopkeeper though, he’ll exchange these harmful items for potentially strong ones! It’s an interesting risk/reward system that gives the game a nice challenge.

Each avian is different, and they each have individual strengths, weaknesses, and starting weapons. So if you’re playing cooperative, it allows everyone to find a bird that is right for them. Choose a Chicken, and you’ll find that you can shoot far while picking the Duck gives you more HP. There are some trade-offs here and there with your characters that you can potentially make up within the items and weapons you find. 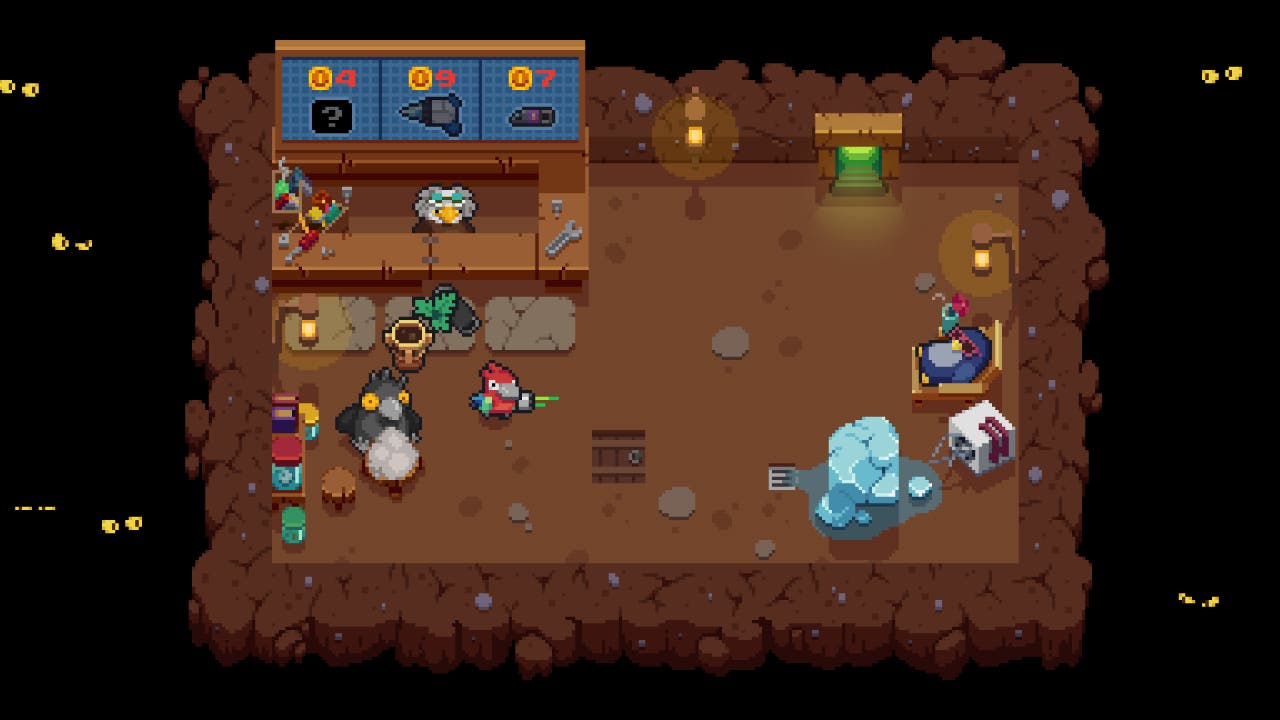 So how does the game play? All your birds have relatively weak guns until you get further in the game to get better weapons. It feels like a significant hindrance at first, but once you get used to your character and the patterns bosses create, you’ll find that it’s not too terrible. The things I did find terrible was the lack of any character progression. You don’t keep anything when you die, so you start things over, and that repetitiveness is what makes the Story mode a bit of a chore to get through. If the game let me keep one item or weapon or something into my next progression, it would give me a little more strategy to play with and less frustration overall. So should you spend your own hard earned coin on Blazing Beaks? Yeah, I do think it’s worth a home on your Switch. It’s a simple game to hop into for quick play sessions and if you got friends in the same room, why not give the co-op some loving. The game is polished, it’s entertaining, it’s got a quirky soundtrack, and controls well so why not let this bird out of its cage and into your Switch’s heart, or something bird pun related.