In 2011, Koji Igarashi and a small team launched a Kickstarter campaign to create a contemporary successor to the golden age of Castlevania games; a true successor to Symphony of the Night. The campaign was a resounding success, and after a long development cycle with multiple delays, a lukewarm beta period for backers and a complete overhaul of the game’s art, at last Bloodstained: Ritual of the Night is released and available to the masses, and it is spectacular.

I will make little effort to hide my love of the Castlevania series, particularly from the PS1 era onward. The gameplay and the thematic elements are a really perfect blend, and the cheese of the story and voice acting (which continued to improve as the series marched forward) were an essential part of the Castlevania charm in my mind. Now we’re many years removed from a proper side scrolling entry, and I have been left wanting more. There have been no shortage of good Metroidvania games in the past several years; if anything we’ve been spoiled by the likes of Hollow Knight, Ori and the Blind Forest, Axiom Verge, and to a lesser extent, Dead Cells. Yet, none of these has quite managed to scratch exactly the same itch.

Bloodstained delivers on its promise of providing a modern take of the formula that made Castlevania so good, and it is a fresh, highly polished take that goes way beyond what I could have hoped for. Make no mistake, though; Bloodstained is challenging, and it pulls no punches in the early hours while you’re still leveling up and collecting gear. This is the kind of challenge you seldom see outside of this genre, and it’s not merely gratuitous challenge for the sake of being hard. The game forces you to hone your skills and mastery of the controls in order to survive and move forward, so that when you do start to tip the scales in your favor, your success is earned rather than simply handed to you. Your progress is therefore natural and rewarding, and as you feel your skills improve along with finding more abilities and better gear, you can sense the power growing within you. 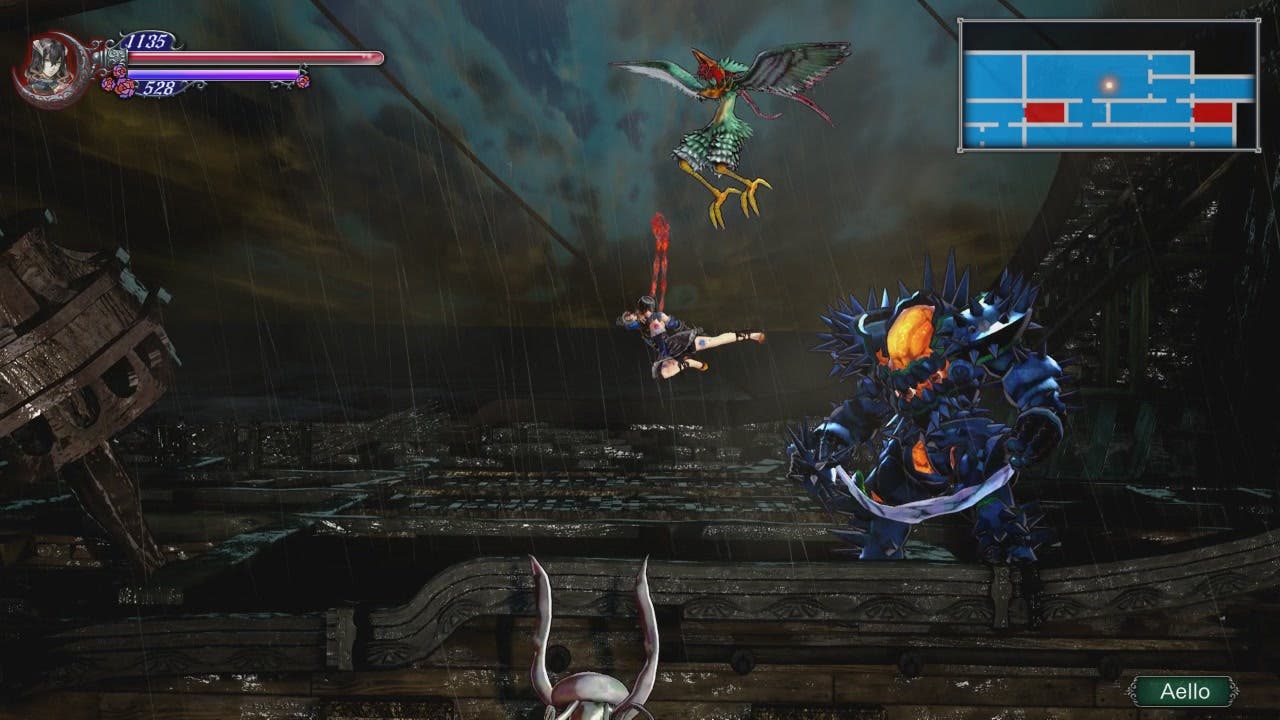 There are some new and interesting systems at play, foremost of which is the Shard system for your magical abilities. The game’s lore and mechanics are tightly integrated, resulting in a sensible (albeit extremely supernatural) integration of Miriam’s back story, the enemies in the world, and the abilities that you gain and strengthen as you play. You are randomly awarded shards from killing enemies, and each new shard grants you a new spell. Shards are coded into five different colors, which represent different types of spells (active, passive, skill-based, familiars, etc). The more shards of the same type you collect, the more that ability grows in strength. You can also augment shards by taking items dropped from the same enemies which grant the shards themselves to one of the game’s vendors, essentially infusing the shards with the essence of the creature that they came from.

There’s also a recipe system for cooking foods and performing “alchemy”. New foods provide permanent stat boosts the first time you eat them, with subsequent meals granting you temporary increases. You can brew potions, use ingredients to create other ingredients, and even forge weapons, provided you have discovered the recipes for them. Suddenly all of the random items you collect as you make your way through the game have a greater, more useful purpose. Some characters even ask for specific items as side quests, which may grant you access to special gear or a useful ability. All of this results in a gameplay experience that feels like more than just running through a spooky, gothic, demon-infested castle hacking away at baddies and stacking up cash and hearts. The world feels alive and dense, with ample space to explore and people to meet. There are side quests to take on, recipes to uncover, dubious individuals to develop tenuous pacts with; it is, to say the least, a rich world that you can very quickly feel like a part of.

The game is also full of small touches that hearken back to the Castlevania series; Miriam’s heavy combat grunts, the over-the-top death rattles of various enemies, flourishes in the UI when picking up special items or leveling up, the menu design in general, the freaking map, enemy and world designs… the list goes on. The music is really something special, managing to somehow evoke themes and moods from Symphony of the Night despite being brand new compositions for Bloodstained. This is of course due largely to the return of long-time Castlevania composer Michiru Yamanae, lending her signature melodies to help further cement Bloodstained as a new classic. Sound design in general is excellent in Bloodstained; every effect sounds great, from enemy growls to the clang of weapons breaking torches, and the quality is clear and strong. Every character is fully voice-acted, and there is a lot of scripted dialog, bringing a new level of depth and intrigue to the story, as well as an ability to connect more with the characters (or at the very least, to learn much more about them). The quality of the voice acting is pretty good on the whole, and overall line delivery sounds natural, thanks in large part to the writing also being pretty good. Of course, this means there aren’t any accidental gems like the now infamous “What is a man?”, but I think having better writing and acting is worth the trade-off.

It of course is simply not possible to talk about Bloodstained without discussing the visuals and the art style. Generally, the art in the game seems to be fairly polarizing; players either really like or really can’t stand the way this game looks. Personally I find the game to be pretty solid from a visual standpoint. The lighting and effects in the environments are really well considered, and overall the art and character designs are solid. It’s an interesting mix of highly detailed and fairly realistic background art, with characters and enemies represented in more of a high-quality animated look. This creates an interesting contrast between the action and the environment, but it also helps make the action stand out and be easier to track in what would otherwise be a visually noisy game. It’s also heavily saturated with color and full of small details, but every decision about where and how to utilize them is made with care. The result is a visually rich experience that constantly gives your eyes something to feast upon, without becoming overwhelming. 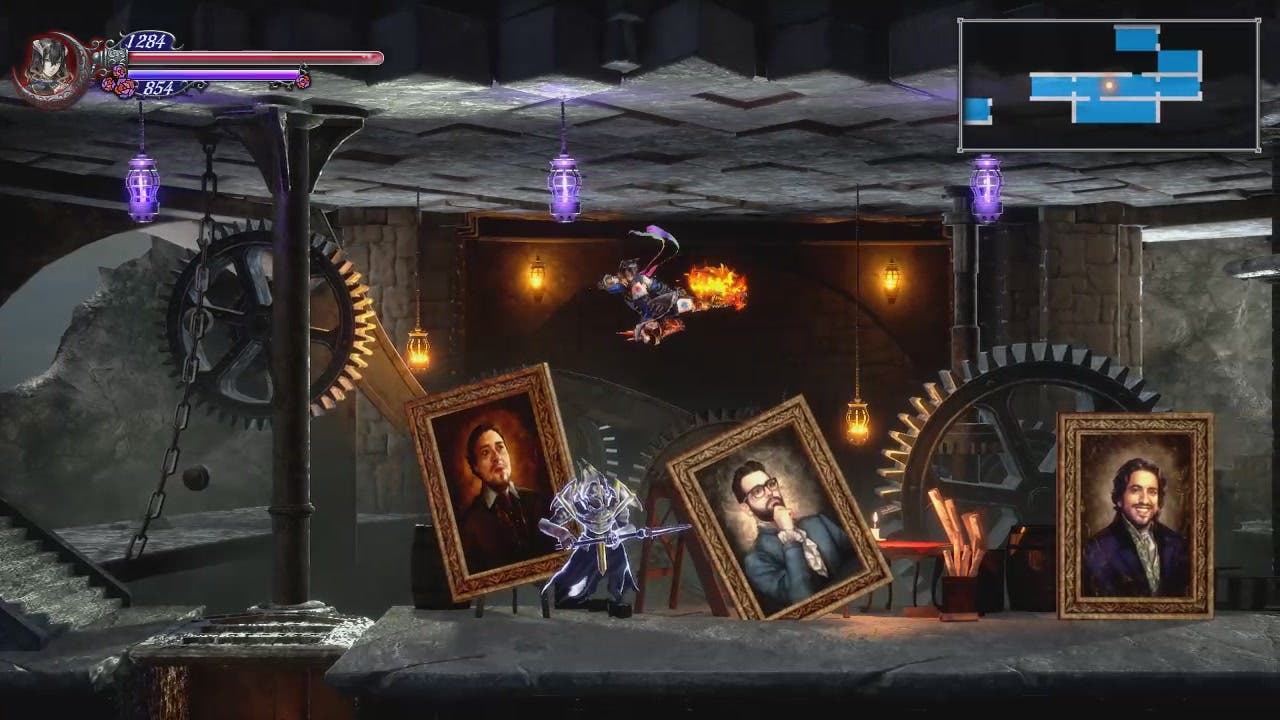 Then we come to the tricky part: the game’s performance on Switch. I spent my first several hours with Bloodstained playing in docked mode on my TV, where I’m generally used to playing things in 4K from other systems or my PC. I was not at all surprised to see the game capped at 30FPS, nor was I particularly surprised by the quality of the visuals; any game that manages to get Unreal Engine 4 to cooperate on the Switch with decently consistent performance gets automatic bonus points, and when playing 3D releases on Switch you come to expect a certain level of visual downgrade. Textures aren’t muddy so much as lower fidelity (an issue which is significantly less bothersome in handheld mode due largely to the smaller screen size), and character rendering can be a little rough around the edges (quite literally). The dialog scenes aren’t too bad, though, thanks to some technical tricks to allow the Switch’s GPU to focus on rendering the characters at large scale.

Overall, playing with the 1.01 patch, I have found performance to be mostly stable. The game runs fine, frames don’t drop too often (with the exception of some boss fights or other seemingly taxing scenes, though what makes them more taxing than others is not clear). However, during my first hour with the game I felt disappointed by how sluggish the movement and combat felt. I didn’t understand how this particular part could have gone so wrong, considering running, jumping and attacking are the three main things you do in Metroidvania games. Then it hit me, this wasn’t sluggishness, it was severe input lag. For whatever reason, the input lag on Switch is very real and extremely noticeable, and some quick searching online confirmed that what I was experiencing wasn’t in my head. Once you know this, it’s not hard to make the adjustment in your brain, but this is the kind of performance problem we don’t often see in modern games. Also, this issue does not exist with any other platform. It’s unclear what about the Switch hardware introduces this problem, but it’s a serious one that needs fixing (along with a host of other polish issues). The developers have stated they are focusing on improving Switch performance above all other work at the moment, but there has been little else said since then.

For the sake of comparison, I purchased a copy of Bloodstained on PC, and I was utterly blown away by how much different the experience is there. On more powerful hardware, the game runs incredibly well with framerates well over 144FPS, and the visual fidelity is light years ahead. The generational gap is hugely noticeable, both in terms of quality and performance. This usually isn’t all that surprising when it comes to multi-platform 3D releases on Switch, but for a game that feels like it ought to be simpler to render than something like DOOM or Wolfenstein, it is still a bit of a shock just how stark the jump backward is. To me this says there are lots of optimization issues in the game. I’m sure many of them are specific to the Switch hardware, but I also wonder how many of these issues are intrinsic to the game itself and are simply not apparent due to the more powerful hardware available on other systems.

The bottom line is that the final product on Switch is still a playable game, but it has some issues that may or may not be resolved and make it difficult to recommend over other platforms if you have the luxury of choice. The primary advantage the Switch release of Bloodstained has is the usual one: mobility. If the idea of being able to play Bloodstained on the go is something that appeals to you, the Switch version of the game is where it’s at, and it’s a good enough version of the game that you’ll still get plenty of enjoyment out of it; it just isn’t the smoothest way to play. If the input lag problem and some of the minor performance issues can get smoothed over, this would fall more into the “impressive port” category.

Bloodstained: Ritual of the Night is an excellent game in so many ways. It delivers on its promises and sets the stage for what I hope is more content to come in this new incarnation of Igarashi’s masterpiece formula. There has been a lot of outcry about the Switch version of the game, and it definitely isn’t perfect, but it’s playable for the most part. Would I recommend it over other platforms? Probably not, unless being able to play on the go is a priority for you. If Switch is your only system, then you should still absolutely play Bloodstained, but set your expectations accordingly. If anything, Bloodstained is a strong enough game that it is still worthwhile despite the technical issues it has on Switch, which is a testament to the highs it can achieve.