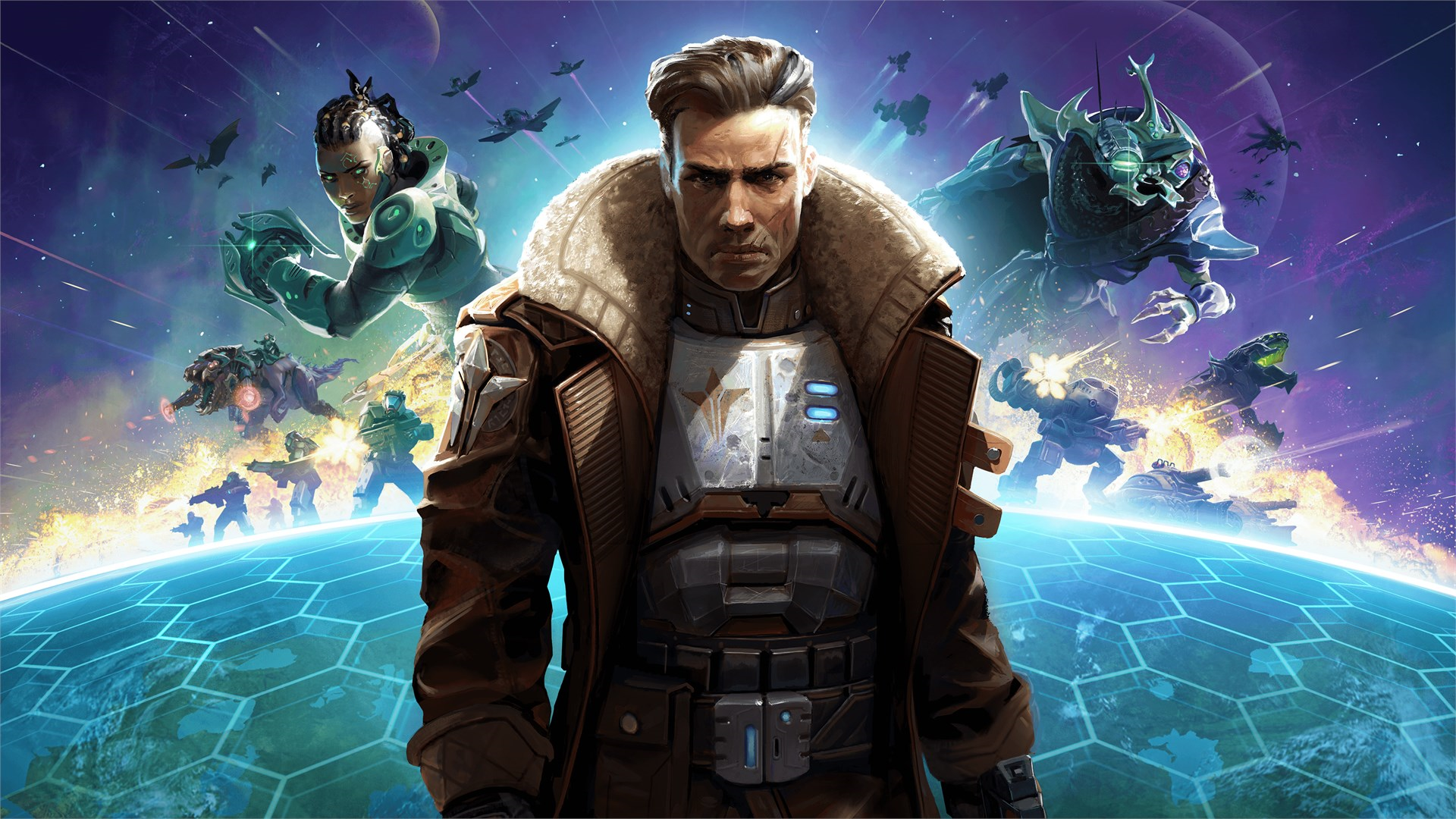 Triumph Studios’ Age of Wonders: Planetfall is right at home under the Paradox banner. This is the first time the series goes sci-fi, but it does so in spectacular fashion. This is a game that blends two genres seamlessly, a complex and detailed 4X game for amassing an empire for the ages, and a tactical turn-based combat system for close encounters. Planetfall has a fantastic story that gets you engaged for every action you make for your civilization, as well as caring for every unit when in tactical combat. Triumph Studios has made Age of Wonders: Planetfall feel superb with every turn. Get ready for planetfall.

For the early story, you’ll play as Jack Gelder, who serves as the Commander. The galaxy has gone under a cosmic dark age, where hyperspace travel has ceased. In an attempt to ride out the storm, Jack Gelder commands his crew to go into cryosleep for 200 years, in hopes that this will pass. They are knocked out of cryosleep after 197 years to discover the storm has lifted, and things in a much different place than when they left it. There are fallen civilizations where those who were left behind were forced to continue on, but have been ravaged by war and famine. As a result, everyone has to deal with the consequences of those actions, to include hostile and destabilized planets. There are eight worlds and campaign stories to take a part of, and each is unique with its own dialogue, events, and things to discover. This is a new age of wonders, if you will.

There are three game modes, a Campaign, Scenarios, and Multiplayer. The scenarios are designed for 2-12 players with the AI taking the 11 other slots. These aren’t as focused as the story missions, but still provide structure for skirmish-based gameplay. The multiplayer is not anything I was able to get into prior to release, but one of the coolest things was being able to enable asynchronous notifications for the game. So Steam will let you know when it’s your turn, and you’re not even playing. With scenarios and multiplayer, you can decide on the worldsize, landmass type, water percentage, and land percentage. In any game mode, there are three paths that will lead you towards victory conditions: unity, military, and development. It’s easier to follow one track over another to actually complete the game. The story missions are the most engaging, and in some case timed, which I wasn’t a big fan of. I like doing things at my own pace, but it taught me to be more mindful of my decisions.

As I mentioned, this is a 4X (explore, exploit, expand, and exterminate) game on the top layer, and turn-based combat game on the next layer. Taking place on huge pieces of land, split up into hex grids. You’ll find yourself pretty familiar territory, but that’s where the comparisons to a game like Civilization VI stops. There’s color-coded movement that shows available moves remaining depending on how far you go. There’s action points, and move points. With only three action points, you need to plan what moves you’re going to make before you execute them.

There’s still an overarching element of diplomacy at play, you can entertain rivals, threaten them, or wage all-out war. Engaging with NPC factions will happen on the regular, where you’ll negotiate trades, pronounce them with positive or negative remarks, or simply declare war. These are relationships you’ll have to maintain to avoid war. The easier path is to fight, but if you’re ill-equipped to handle the onslaught, then it’s game over. Age of Wonders: Planetfall has some of the most interesting factions of any 4X game, so it’s always a treat to at least hear them out, no matter how narcissistic and self-preserved they appear to be.

There will be areas of hex grids, they are called sectors. They contain resources to exploit, or otherwise produce when you’re in control of them. Sometimes these pieces of land or water will contain landmarks, which improves sector dominance. Sometimes enemies have claimed them, but not settled there. You can take these by force, and oust any squatting forces, though this can have consequences. Visit Sites give players a boost upon arrival. Sectors are crucial to players gaining their foothold towards control of the planet.

Along the way you’ll discover heroes, and they’ll ask to join you. You can dismiss them, or take them in. There’s a wide variety of discover heroes, and they’ll join you in your crusade for dominating the planet and taking back what’s yours, shared with others or not. Peace is an equally welcome path for any commander to take. In order to get there, you’ll have to enact doctrines and perform research, both military and societal that will shape your course of actions for future turns. Planning ahead here is paramount. 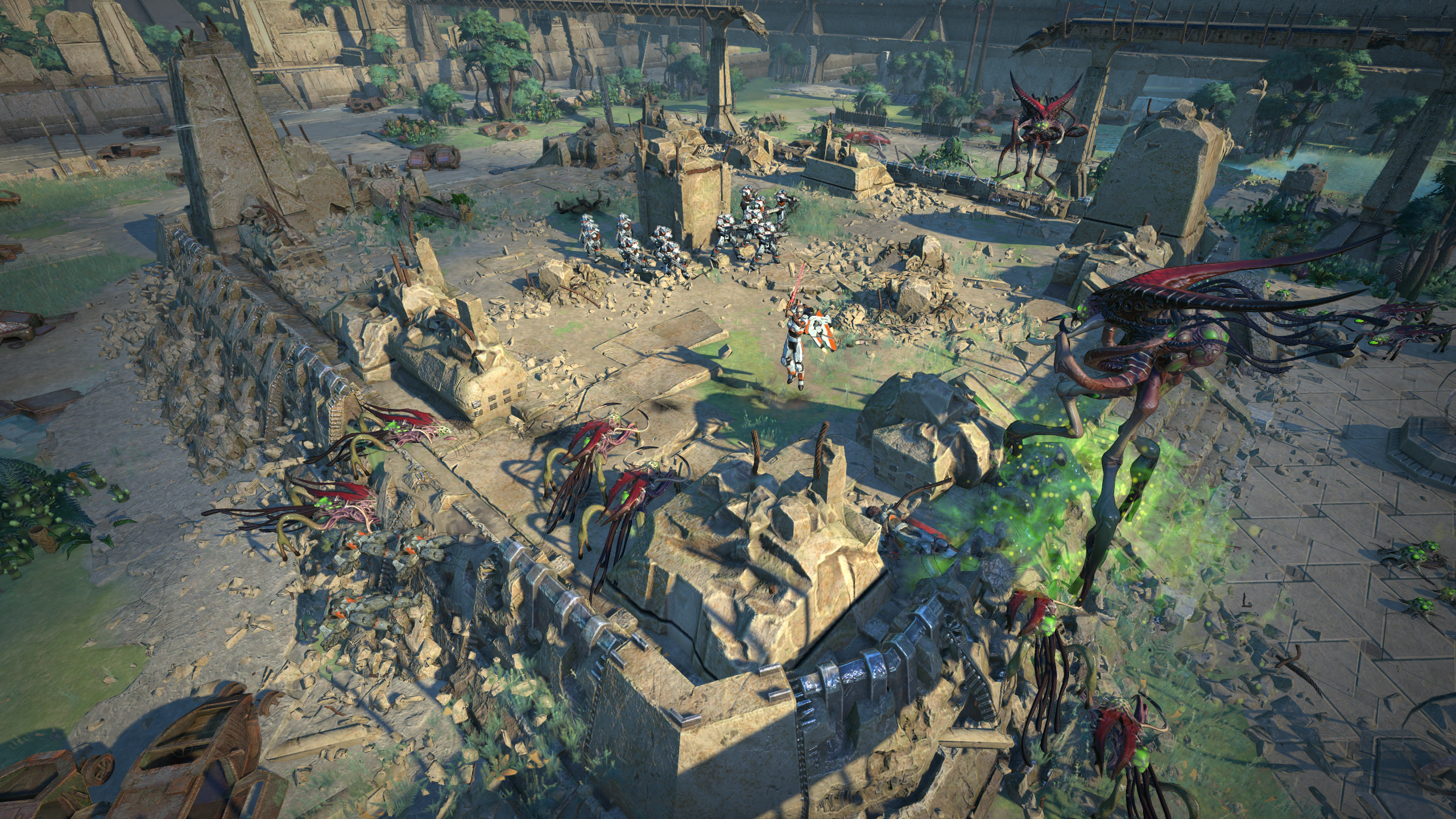 The game features turn-based combat when conflicts arise. There’s the Age of Wonders standard of manual combat, or you can choose the new auto-combat feature, which has two paths. Battles will present your army versus theirs, and the odds of winning the outcome. You can fight it out manually, or auto-resolve the battle and hope for the best. If you choose manual, there will still be an option to watch the auto-combat play out for the selected encounter. It can even be turned off if you wish to assume manual control for the end of it, or course-correct. Neither option is bad, and they’re both excellent ways of experiencing the excellent combat Planetfall has to offer.

An army will be mentioned often. Sometimes you can’t capture a sector without one. They can consist of up to six units, usually something you want to combine with a hero unit. They can consist of any configuration: mechs, regular units, all heroes, whatever you think works best. If you’re familiar with the Age of Wonders series, or even something like XCOM, you’ll know how to fight in this game. Position your units against cover, and only take shots when the chances to hit are high, or risk blowing an opportunity to do damage. All units have abilities that are unique to them, but are general enough that you’ll quickly learn how to use them efficiently. I’m constantly in awe how natural the combat in Age of Wonders: Planetfall feels.

As your heroes engage in fights, they’ll gain combat experience. They level up, and are able to take on new skills and perks. There’s even upgraded versions of certain skills. Each hero also has equipment that can be modified, so long as you have other gear in your armory that you can swap out with. As you research new weapons, you’ll be able to equip them here. There’s even hero mods that pull from a pool for you to equip that will buff your heroes. There’s so much depth here, I’m still learning the more I play.

Tactics and strategy is all part of the combat here, with flanking being the quickest, easiest, and catastrophic tactic of them all. A good flank will open up for them to take sizable damage from you. In and out of combat, you can charge up “Operations”, which is a list of things you’ve researched which can simply buff friendly players, or issue devastating laser strikes at a crucial point in a battle. Planetfall‘s combat is deep and rewarding.

I’ve made reference to the “commander” several times, one of the hero units you’ll play as. You’ll find the commander similar to the chosen leader in a Civilization game. But here you’re able to customize commanders, and save them for use later. The options for customizations covers their avatar, pose, facial features, accessories, clothing, and background. Sure, it’s pretty standard fare in any other game, but Age of Wonders: Planetfall sets a high bar.

There are six main factions in the game: Assembly, Vanguard, Syndicate, Amazon, Kir’Ko, and Dvar. They are each unique, humorous, and absolutely self-centered. The many years that have passed where civilizations have fought for survival has left them with a sense of self-preservation that can’t be matched. Age of Wonders: Planetfall doesn’t take itself too seriously, I mean, there’s one that equips dinosaurs with lasers. So there’s that.