Boreal Blade is a melee fighting versus game that launched yesterday on Nintendo Switch together with a free demo, and a Steam Beta. It has a ton of in-depth combat mechanics that are hard to spot from just the trailers.

n a new blog series named the Battlemaster Lessons, the concept of ‘natural blocking’ is explained in detail in the first post. In Boreal Blade weapons are physical objects and therefore block attacks even when you are not actively using them. There are many ways to use natural blocking to your advantage, and those are explained in the first Battlemaster Lesson found here.

Below are a few examples:

Here you can see a warrior preparing to attack. While searching the right weapon angle for his swing, the enemy attacks. Natural blocking guarantees that the hit gets blocked even though our warrior is not actively doing any blocking by himself.

Look closely! Our warrior is not actually doing anything else than simply moving around to block incoming attacks. Since enemy warriors can’t force him to constantly block with continuous attacks, deadlocks occur rarely, and the flow of the battle is smoother and more exhilarating. He has fair chances to attack himself.

Both the Boreal Blade demo and full game are available on Nintendo eShop, with details of the differences below: 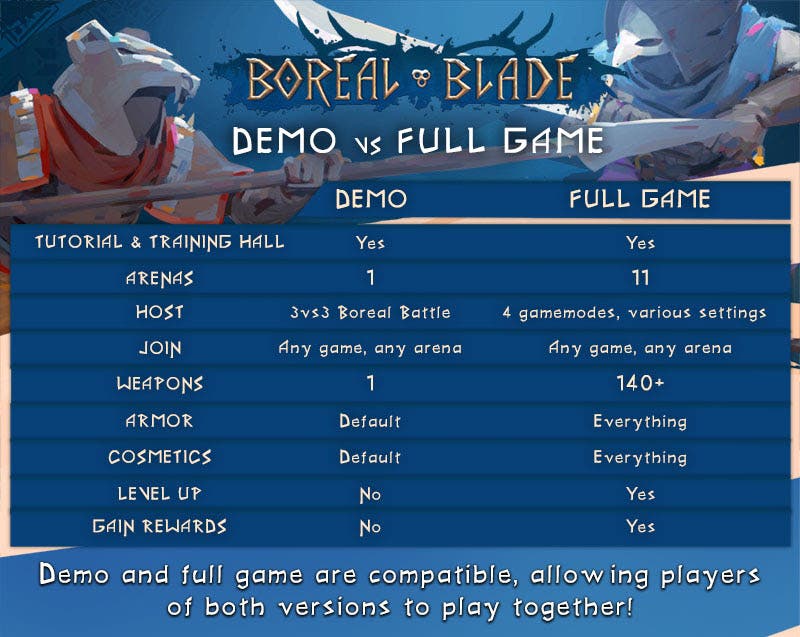