There are plenty of games out there about making friends, exploring islands, and having adventures. There are games that explore themes of childhood, themes of tragedy and loss, and coming of age stories. There are even games that prominently feature geese. And then, there is Knights and Bikes, a game which combines all of these elements, but in a way that is unique, special, and meaningful. It encourages you to connect with the characters and the story, and it uses elements of imaginary play, fantasy, and a little bit of magical realism to bridge the gap and draw you in. For a game that looks like a cutesy romp on its surface, Knights and Bikes delivers a solid story and memorable characters that will stick with you well after you set down your controller.

The game opens on a rainy shipping yard on Penfurzy Island, where main character Demelza waits with her father for a boat to bring supplies to last them for the winter season. It’s a grey, dingy day, and the piers are piled with all manner of junk, boxes, and containers. It’s the sort of situation an adult would be happy to wrap up business with and move on from as quickly as possible, but you get to see right away the potential for fun and discovery as you’re handed control of not one, but two children. By exploring the docks with Nessa and Demelza, the former having just arrived as a stowaway on the supply ship, and the latter just trying to find something fun to do to pass the time, the game gives you a quick glimpse at one of the primary storytelling tools in its arsenal that it will deploy in different ways throughout the adventure; making the mundane seem magical by showing you the world through the lens of a child’s view.

In some ways, Knights and Bikes is a guided experience, presenting you with ordinary places, but giving you ways to interact with locales, objects, and situations that would be first nature to a kid. Paired with some extremely well-written dialog between the two girls and Demelza’s running commentary as she shows Nessa everything there is to know about her home, you see Penfurzy through her eyes as her giant, personal playground. The hand-drawn art style also lends a lot to the experience, adding a layer of instant whimsy and playfulness to everything you see as you explore. The effect is further augmented by some lovely animation and extra effects courtesy of Demelza’s active imagination that blend seamlessly with the real objects in the world, so that the line that separates reality from imaginative flourish disappears, and you experience the world as Demelza does. Playing the game solo, Nessa wound up being an effective surrogate for me as a player; new to Penfurzy, hesitant to open up and participate at first, but able to unlock her own potential for imagination and adventure thanks to some unrelenting coaxing from Demelza.

I’ve played plenty of games in the past that evoke a childlike sense of wonder, imploring you to relive my younger days and see the world as I did before I became burdened with the notions of responsibility and realism. I don’t think I’ve ever played a game that has so effectively immersed me in that childlike mindset, though. Knights and Bikes doesn’t just ask you to see the world like a kid, it straight up shows you their perspective first hand as they see it, all the good and the bad, and you begin to feel Nessa and Demelza’s highs and lows as your own. You experience their joys, you hear about their problems; some are trivial (though not inconsequential) and others are crushingly weighty. Watching Demelza show Nessa the issues she’s grappling with, and the ways in which she copes with (or resists) them are both charming and heartbreaking, and you quickly realize that Demelza’s active imagination is the best defense she has against her entire world crashing down around her.

Over six days, you’ll get to explore Penfurzy while you embark on a quest to find the island’s fabled lost treasure, which Demelza hopes will reinvigorate the declining tourism that her family relies on for their livelihood. You’ll explore goose cages, miniature golf courses, town squares, amusement parks, forests, and other exotic locales on Penfurzy, raising a ruckus and tearing up the dirt roads on your rad bicycles. It is a quintessential tale of kids being kids and finding their own fun in a place meant mostly for adults, and does an incredible job of bringing you back to your own childhood. The girls make silly noises while they run around town, imitate motorcycles with their voices as they speed their bikes from place to place and have impromptu races, and even mundane activities like moving from one location on the island to another becomes its own miniature adventure, creating excitement along the way not just out of necessity, but simply by nature. It takes me back to my own childhood, riding my bike around the neighborhood with my friends having made-up adventures, exploring the woods nearby on summer afternoons and looking for forts or tree houses or undiscovered treasure. I could swear we once ventured deep enough to find the ruins of an old stone hut and marveled at how such a thing could still exist, seemingly unknown to anybody else, but it could just as easily have been something we collectively imagined. Those are the kinds of things this game makes you remember, the memories it helps you reconnect with. 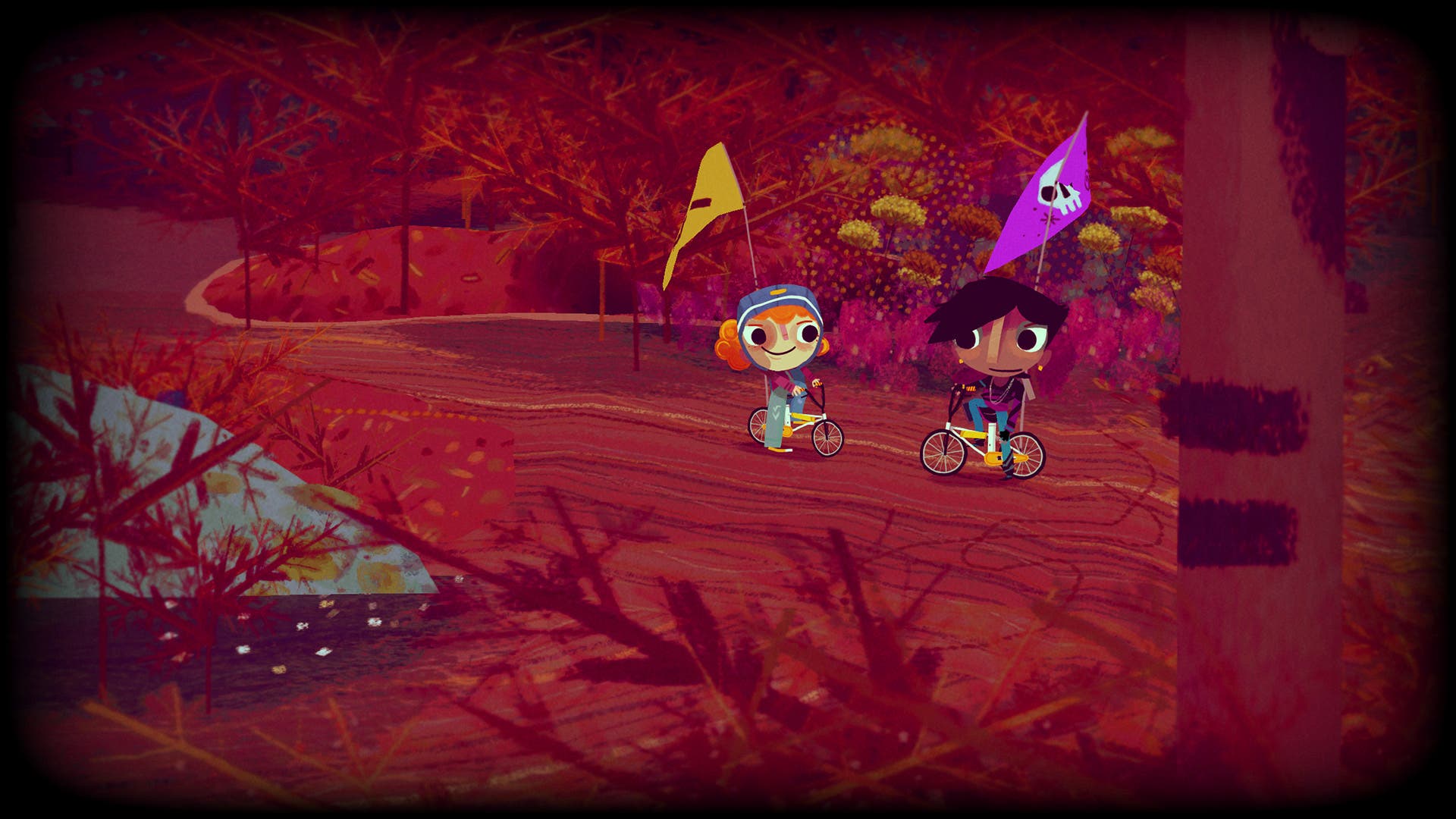 The actual game play of Knights and Bikes is very tightly integrated into the storytelling. You run around and interact with things like in any other game, but throughout the game there are extra things you can do and ways you can interact contextually that are specific to whatever is going on in the moment, that movement and interaction aren’t just systems in the software, but essential parts of the experience. Again, it’s that trick of making ordinary, mundane things seem fun and special in ways you don’t normally expect simply by adding flavor and diversions in appropriate measure. You can read signs, talk to people, feed geese (did I mention there are geese?), stomp around in the mud, zoom around on your bike, and chuck a frisbee at literally everything, just to name some options. Oh, and you have a goose named Mr. Honkers who follows you around, and frankly I am duly impressed by anybody who can wrangle those feathered physical manifestations of mayhem. You can even customize your bike, with loads of options for paint jobs, wheels, handlebars, flags, and bells, and the game is pretty generous about letting you more or less put whatever you want on that thing, exchanging the random trinkets and baubles you find in junk piles for parts.

It’s clear that there was a strong, central vision for what Knights and Bikes should be, as it shines through in the writing, the artwork, and all of the extra little touches. This is a game about the pleasures and predicaments of childhood; it’s about family, friends, and connection; it’s about navigating a world as a person with goals, thoughts, and feelings that aren’t always taken seriously by the people around you. There’s a lot to discover about Knights and Bikes as you play, and the experience is one worth having firsthand. It’s a whimsical, joyful, sweet adventure that deals with some very heavy subject matter but manages to stay positive in the face of difficulty in the way that only a child really can.