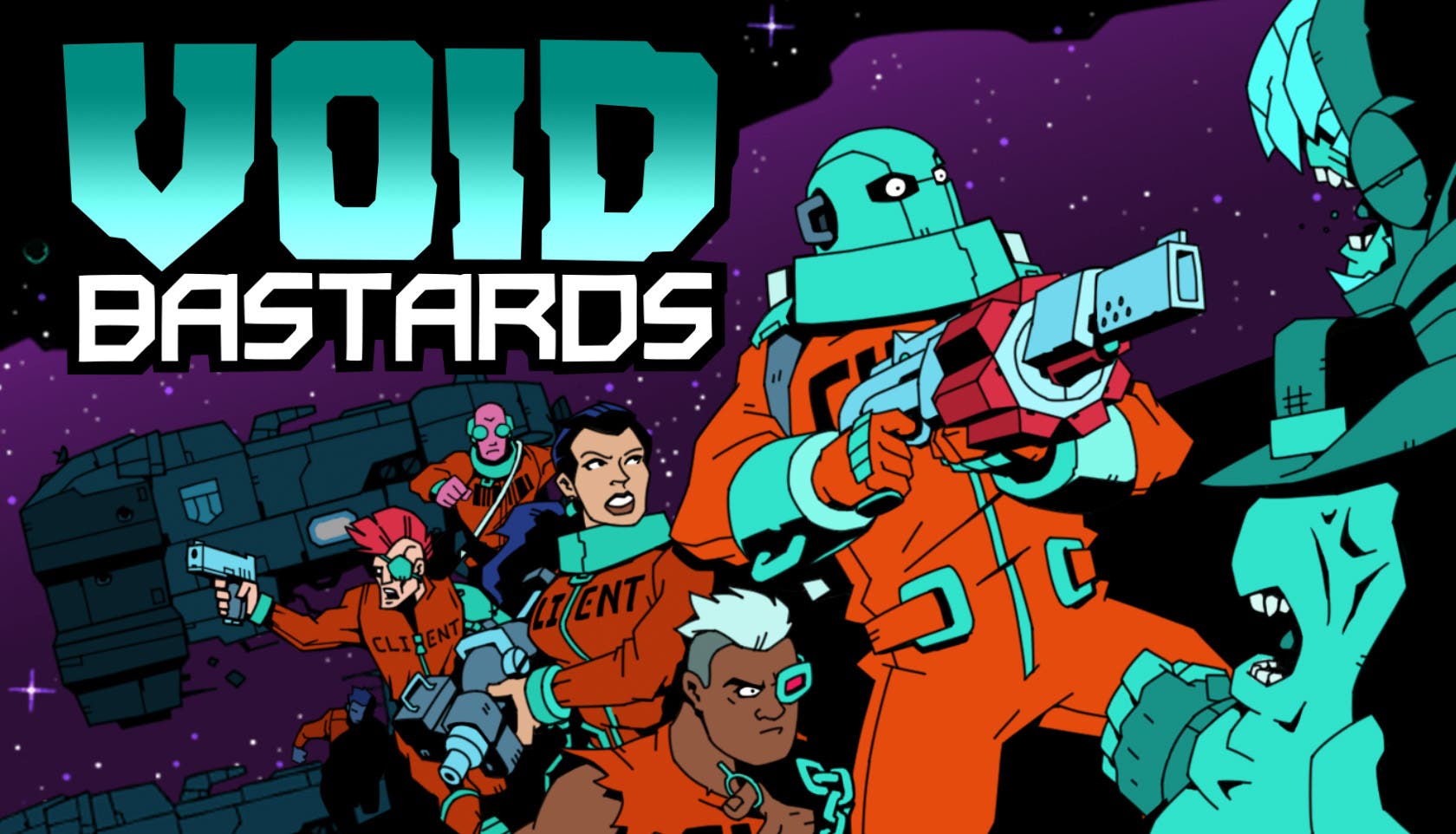 Void Bastards makes its way to the Nintendo Switch, and as an already impressive game it has a lot going for it out the gate. Despite some minor technical issues and some poorly scaled in-game text, overall it's a successful port that preserves most of the intended experience, and is a great place to play for the first or fiftieth time.

Void Bastards is an exciting spin on the rogue like formula, blending elements of FTL, System Shock, and run-based game play, dressed up in a fantastically realized art style inspired by graphic novels. The world is detailed, saturated in creepy desolate sci-fi atmosphere sprinkled with healthy amounts of dark humor, and sports loads of smart design choices that give the game a unique feel in a crowded genre. Scott loved Void Bastards when it debuted last year, and I’m personally very excited to see it make its way onto the Switch, as its game play feels extremely well-suited for shorter sessions on the go. I also shared in that enthusiasm for the game at launch, and have been curious to see how it would fare when brought to a portable platform. After all, this is a game where immersion is essential to the experience and any compromise to its critical components will break that experience, and undermine a lot of what makes Void Bastards such a fun game to play. If you’re not familiar with Void Bastards, here’s what you need to know. You play the game as a series of prisoners conscripted out of cold storage on a massive prison barge called the Void Ark, which is currently stranded in the Sargasso Nebula. In order to get unstuck, and for lack of any other sentient life on board, the ship’s cordial and vaguely sadistic AI sends prisoners out on reconnaissance and gathering missions to other ships encountered in the system. You play as those prisoners, and your goal is to gather materials, fuel, and plans needed to repair and propel the Void Ark so it can make its way to its intended destination to deliver its massive haul of galactic miscreants. Hypothetically there’s incentive for prisoners (cheekily referred to by the AI as “Clients”) to cooperate as success helps reduce their sentences, but the more likely scenario for them is an untimely death at the hands of a hostile environment.

When you inevitably get your prisoner vaporized, the ship’s AI gleefully, uh, re-hydrates a new prisoner to take their place and send out on the next mission. There’s an overall level of persistence in terms of what you’ve brought back to the Void Ark over time and improvements made to the ship, but any items or progression on your prisoner is lost upon death. That means if you had scored some precious fuel or rare parts before expiring, those items are lost, and you’ll have to go out on a new mission with a new prisoner to try and make up some lost ground. To make things even more interesting, each new prisoner has at least one randomized trait that can either help or hurt your progress, or just provide a slight twist on things. I’ve had prisoners with chronic coughing conditions that make stealthy game play significantly more difficult, I’ve had prisoners with slight perks to health or aim accuracy, I’ve had prisoners who can carry extra weapons and prisoners who will periodically drop items because they have butterfingers. I’ve even had a prisoner with a penchant for screaming “YAHOO!” every time he looted a container, which was hilarious and had serious implications for how I’d approach some situations. There’s a real depth of creativity available within the trait pool and I’d rather not spoil the best ones, but suffice to say that there’s some excellent built-in potential for each character to feel more unique than others.

The game unfolds on a star map reminiscent of FTL’s, and you burn fuel units to move between nodes to find ships or stations to dock with and begin raiding. Some situations are rated more difficult than others, but their yields will be greater. Sometimes all you really want is to get some fuel and food and keep moving, so a smaller, easier ship can be enough. Sometimes you need rare parts and have to raid a pirate frigate and pray you get a good roll on the randomized map and the enemy list waiting for you inside. There are some easily dispatch-able baddies in Void Bastards, and in many cases you’ll find you’re better off avoiding combat and sneaking around instead, or even turning a ship’s security systems against its crew. There are also some enemies that are truly formidable and who will pursue you aggressively, who you’ll be forced to take out, outrun, or come up with creative solutions to keep them at bay. You can have runs go incredibly well and avoid most detection; you can also have runs go extremely, comically sideways, like finding yourself dealing with failing power generators, malfunctioning security systems hostile toward anything that moves, and a slew of nasty baddies nipping at your heels all at once. Get reconstituted from mysterious goo, they said! Work to reduce your sentence, they said! It’ll be a great time, they said!

When things go well, though, completing missions feels so very good. Sneaking your way through a ship, outwitting its inhabitants, hacking your way through secured areas, making off with precious loot (and maybe some new weapons for yourself!), and getting back to the S.T.E.V. (your extraction pod, obviously) really gets your endorphins going. You’ll feel like you pulled one over on the ship you just ransacked, that you’re one step closer to somehow getting a leg up on the Void Ark’s custodian, and that you’re just generally a top-tier player. Because of course you are, look at how well you just did. What a pro. That next band of grimy space pirates has no idea what’s coming for them! Especially now that you’ve graduated from the game’s basic pistol to a Riveter and can mow down some Juves in a hail of rivets. Listen, Void Bastards is really fun. It feels great to play, each ship you raid feels like a fun new puzzle to solve, and you’re constantly balancing your available resources against your own ambition and ability to eke out the best possible outcome. When you win, you feel smart AND skilled. When you die, it stings a bit but you’re right back in the saddle. All of this is elevated by the game’s wonderful visual presentation, in which the enemies and environments look like the pages of a beautifully illustrated graphic novel come to life. The story beats themselves are presented as panels in a graphic novel with motion in each frame, and word bubbles to present spoken dialog. The entire thing is designed to give you the feel of taking part in the story inside of a book, from the bold color palettes and heavy strokes to the little text-based barks echoing in-game sound effects. The game’s title screen is styled to look like the cover of a graphic novel series and frankly it’s delightful. It’s a really special, fun treatment, and the overall effect while playing is spectacular.

All of this would fit in just fine as a review of the game by itself. But how does this experience translate from more powerful platforms to the Switch? Is Void Bastards the latest success story in Nintendo’s ever-expanding portfolio of Switch games? I would say the answer is mostly.

Make no mistake, Void Bastards is still the same game, with no obvious compromises made, which overall is a great thing. For the most part, the art style lends itself well to the game scaling down to the Switch’s hardware constraints. In many situations, the differences between the Switch version of Void Bastards and its other console brethren are minimal. However, there are cases where the system struggles a bit, and there are elements of the port which seem like they could have used a bit more attention. One of the earliest moments of the game, which has you walking into a giant domed room full of papers whisking about in multiple directions (highly reminiscent of the filing room in Futurama’s Central Bureaucracy), shows noticeable drops in frame rates compared to the relatively smooth performance in most of the rest of the opening mission. It’s truthfully not a common occurrence, but it does remind you of where you’re playing the game, and sets a precedent from the beginning to adjust your expectations for when there’s a lot happening on the screen.

More noticeable and admittedly more disappointing, though, is the utterly minuscule size of the game’s text when in handheld mode. Things show up mostly fine when your system is docked, but if you’re playing on the built-in screen (which, for Switch Lite players, is the only way), you are going to have some difficulty reading some text in the game, and there’s really no way around it from what I can tell. It’s not completely illegible, but even with strong vision, I found myself having to get pretty close in to read some of the smaller labels in the UI and in cut scenes. I assume that a solution for text scaling might have been hard to implement given the game’s presentation, but this is a detail that will definitely cause headaches for some players (literally and figuratively), especially those on the Switch Lite’s even smaller screen.

Other than these two issues, though, the game is a great fit for the Switch. As I mentioned before, the ability to tackle a single mission at a time or multiple in one session makes it well suited for any length of play session (especially given that the Switch lets you easily sleep and resume in the middle of a mission if you have to), and generally speaking, playing and interacting with the game feels easy and natural. Movement is fluid, aiming feels well tuned, and at no point did I feel as though the controls were getting in the way of my ability to progress or do what I wanted. Playing on a handheld system is maybe not the best way to experience what it has to offer, so if you have the option I’d recommend popping your Switch into a dock and playing on TV, but it’s not the end of the world if you can’t; just do yourself a favor and grab some headphones.

I’ve been a fan of Void Bastards since its initial release, and overall I feel the Switch port is largely successful, more so even if you’re playing in docked mode. There are some minor issues with the handheld presentation, but they’re mostly workable, and in the majority of cases shouldn’t prove too distracting from the overall experience. That said, you may find you have more trouble if you struggle with reading smaller text for any reason. Aside from that, it’s the same great game, with all the style, flair, and personality intact. It’s an excellent addition to the Switch’s growing catalog, and you’d do well to have it in your own library. I for one am happy to have a renewed excuse to start exploring the Sargasso Nebula all over again, and help a whole new crop of space prisoners work their way toward early release in some form or another.