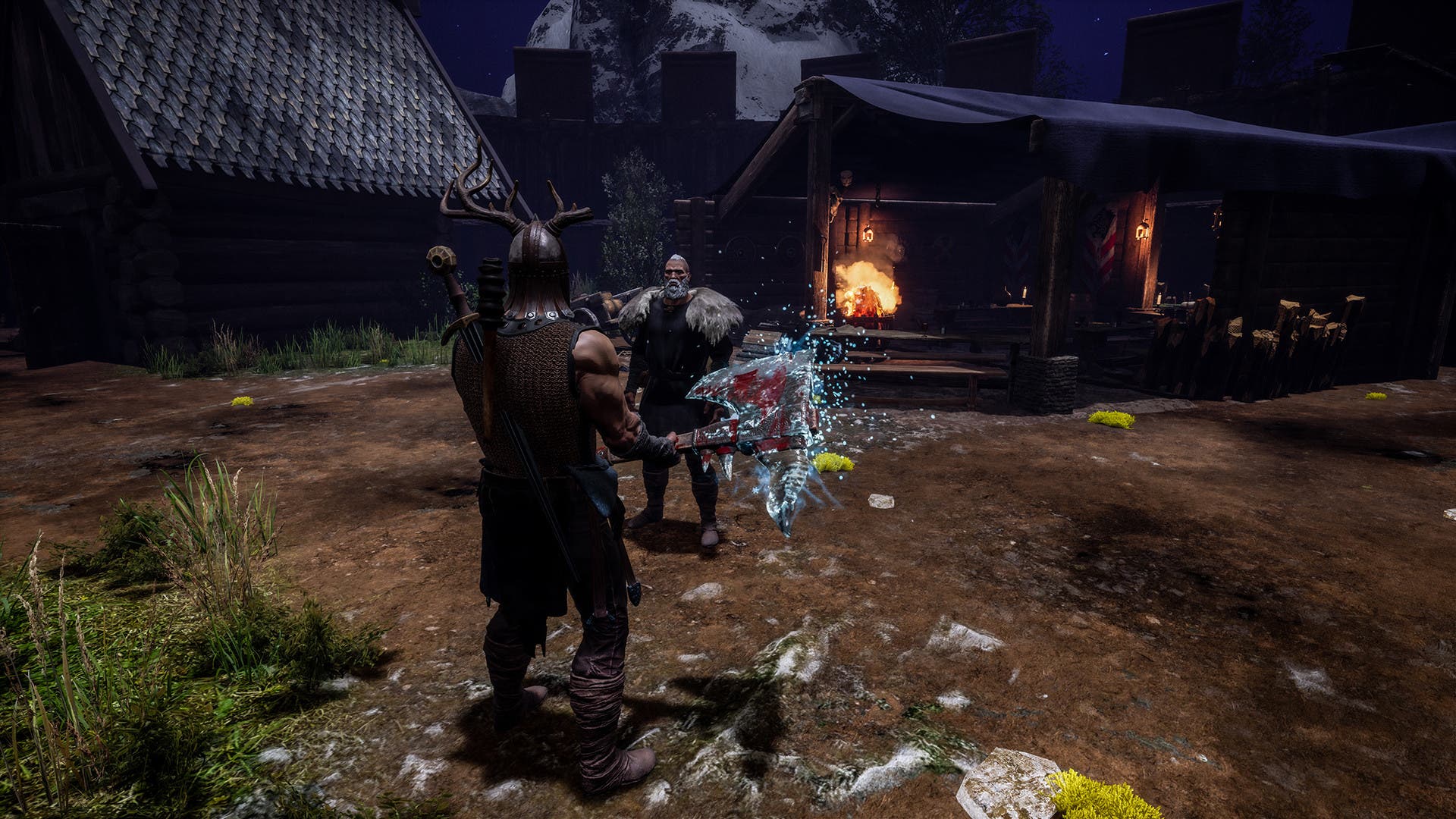 Stop me if you’ve heard this one before: you are a chosen warrior that’s been tasked with the overwhelming duty to stop an apocalypse from occurring. Not just any apocalypse mind you, but Ragnarök, unleashed by the trickster Loki. Steeped in Norse mythology, you are guided by other Gods to reverse Loki’s damage to Midgard before it’s too late. The game then lets you loose to play the game as you see fit. You can follow the main thread, or find the side quests to help those in need. It’ll take you around 50 hours to see the main quests through. Stopping Loki is no easy feat, as you work through the different Ages in undoing Ragnarök, it’s an epic adventure not seen before.

There are a lot of quests in this game. The side quests are rather straightforward, and open-ended in how you complete them. But they mostly involve going to a location to kill someone or collect something, then going back to talk to the quest giver. I’m not upset with that, because all of the quests are voiced, and the NPCs all have something interesting to say. The developers say that some of the quests were inspired by the community during the rescue efforts of Studio 369. With nearly 100 hours of gameplay, there’s no shortage of things to do here. 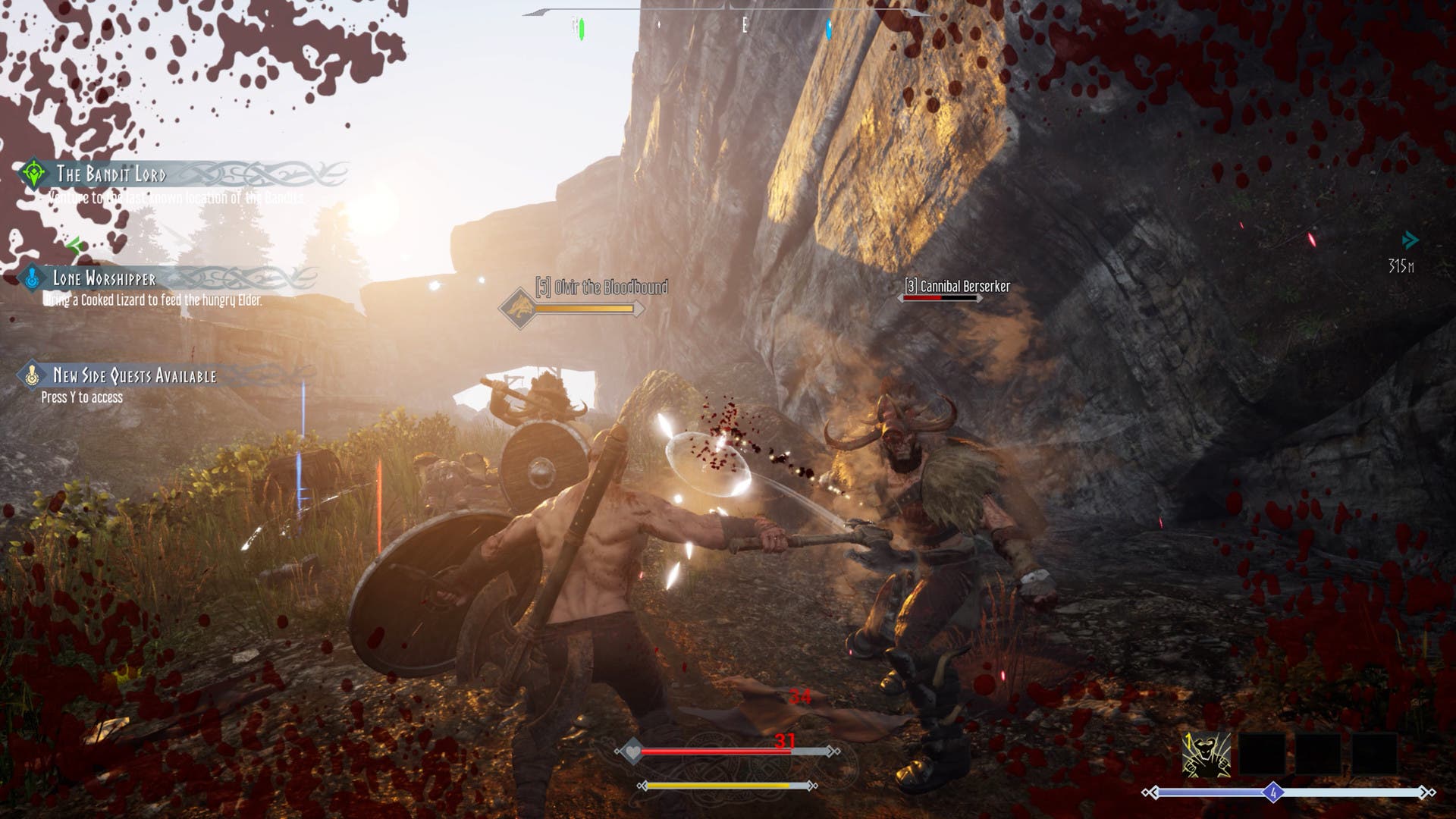 In terms of gameplay, this is an RPG mixed with some light survival elements. You’ll need to gather resources like wood, stone, iron, and more to not only craft weapons and armor, but help build up settlements that have been ravaged by bandits, trolls, and other Norse creatures. Food is important, dropped by animals and enemies, can be cooked to slowly replenish health and keep stamina up. Since this is an RPG, combat and quests begets experience that feeds into levels. With each new level, you’ll be given skill and attribute points to be spent any way you like. At a certain point, you’ll be asked to align with a God: Thor, Hel, or Odin. You can actually decline to align with anyone, and forge your own path. But the rewards for aligning are great, and should definitely be considered. As you invest in skill points, you’ll never be committed in a way you can’t come back from, as the game allows you to respec anytime you want. This is an RPG that doesn’t get in the way of letting you play the way you want.

There’s nuance to the combat, but it’s a rather basic system. There’s light and heavy attacks, a block, or parry. You have high mobility, so you can dodge or roll out of the way from most attacks you’re not able to defend against. You’ll use weapons like swords, axes, spears, and even draugr arms. Every area of the game has a level range, and is a good indicator of difficulty in comparison to your own. You can configure your skill bar to include active and passive skills based on what you invest into. This also extends to the radial menu where you can configure it however you like, I found a nice balance of weapons and healing items to have at the ready. 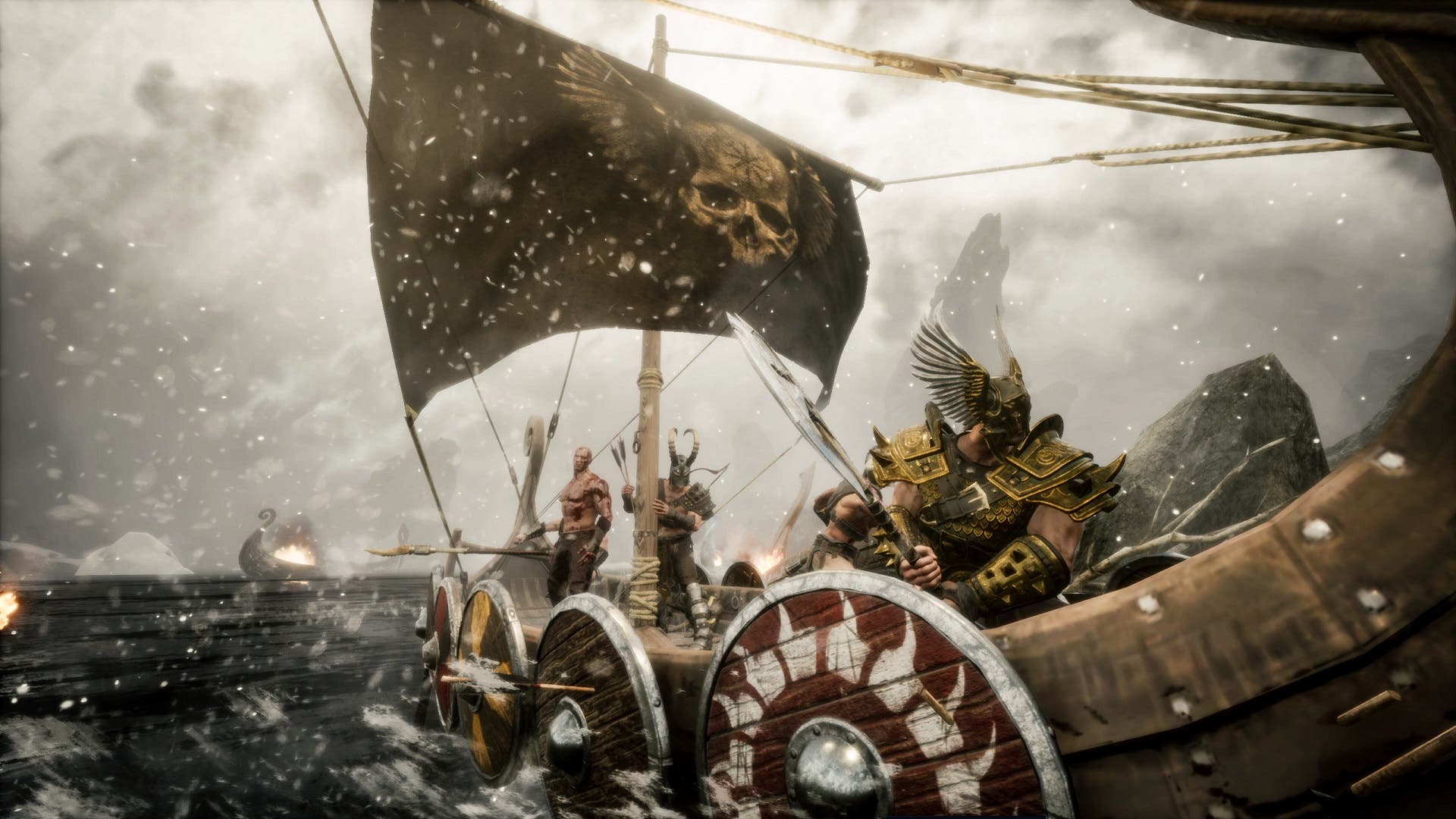 RUNE II‘s map is huge. You can walk or swim across all of it, and you get the feeling that’s what the designers want you to do. Truthfully, there’s nothing to see or do except fight or come across a treasure. Aside from being on-foot, you can craft rafts (slow) or Viking boats (fast) to get around to the secluded islands or far away places. The game does offer fast travel by Bifrost, which uses travel runes to specific points on the map. The modes of traversal certainly ease any friction there would be about getting around.

Death seems somewhat inconsequential. I first found this out when I cut down a tree, and it proceeded to fall onto me and kill me. Upon my resurrection, I was far away from where I last was. Once I got back to there, I found my body, but all of the items I had on me were already there. I’m playing on the Normal difficulty, which is the second of four difficulties. You can attune to a Bifrost gate to respawn near where you want, making it a temporary respawn beacon until you choose another. This further cements the fact that dying has no real consequences, at this difficulty. So as a result, there’s no fear in combat, which could have a negative impact to one’s enjoyment. The fact that nothing of value is lost upon death, makes it easier to progress and keep moving through the story. 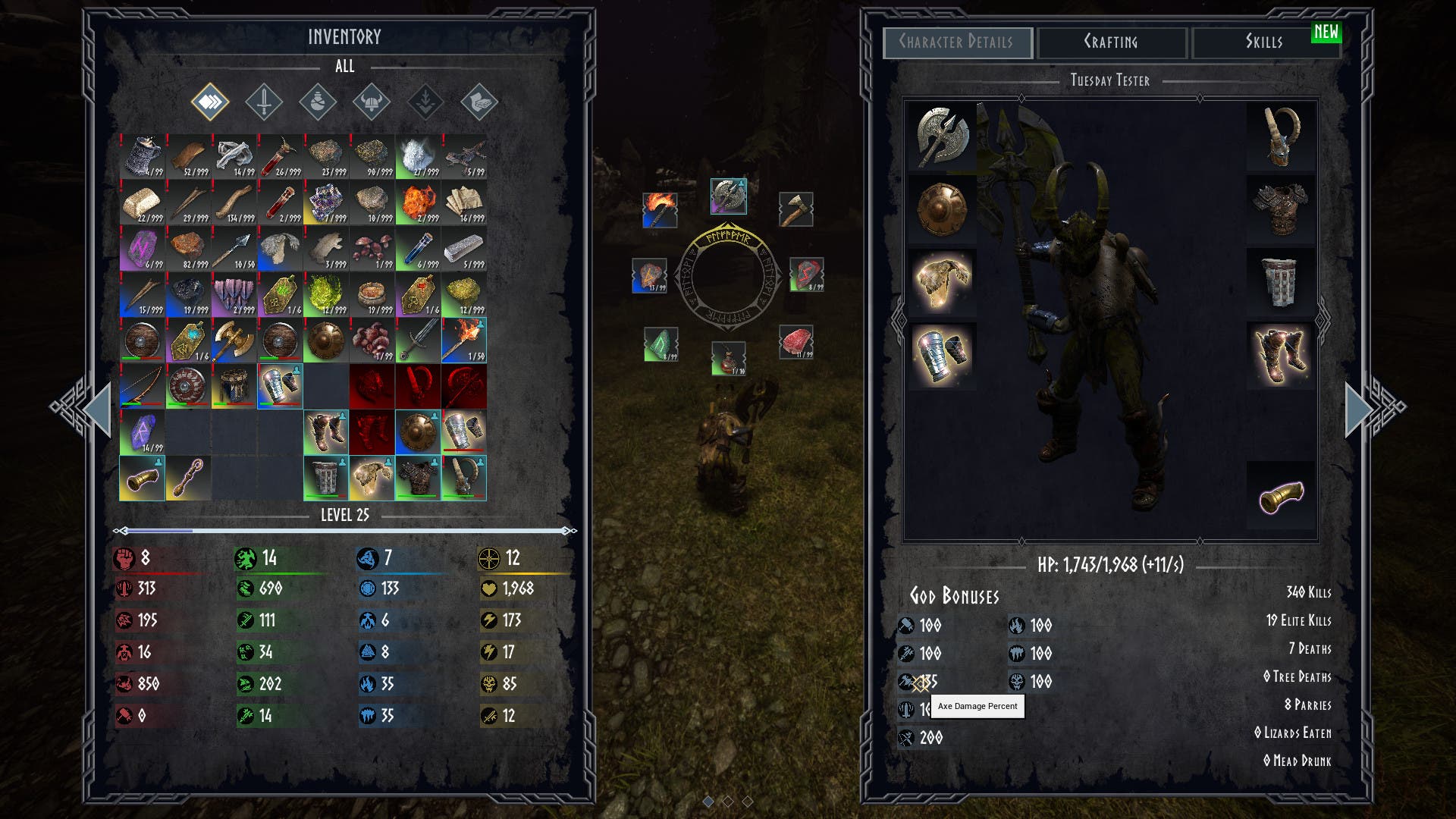 The inventory space in RUNE II is expansive, and I rarely ever ran out of room. It’s a standard RPG grid-based inventory where a singular item takes up a slot, and items stack if there’s many of them, up to 999 in most cases. This is one of the most user-friendly and uninhibited inventories I’ve seen in a while, and it’s very welcome. It’s a simple thing that’s not complicated by other systems. The game has a simple save system. It’s tied to a single save slot, and you’re only able to access whatever the most recent save is. You can save manually, but the game will save automatically at certain intervals. You can save and exit, but know that reloading the game, it’ll place you back at the last Bifrost gate you attuned to. That said, RUNE II will save your player data, but not your location. It works well, but there’s no backups, should anything happen to your save.

RUNE II can be played solo, or cooperatively. And it’s a game that’s definitely more fun with friends, and in some cases, easier. I played this a majority solo, and only got hung up a few times. There’s also a PVP mode in Beta that will let you square off against other chosen warriors to fight to the death using your wits, skills, and weapons at your disposal. The game is crossplay with both the Steam and Epic Games Store version, ensuring that no matter where you have the game, you’ll be able to play with someone on PC. 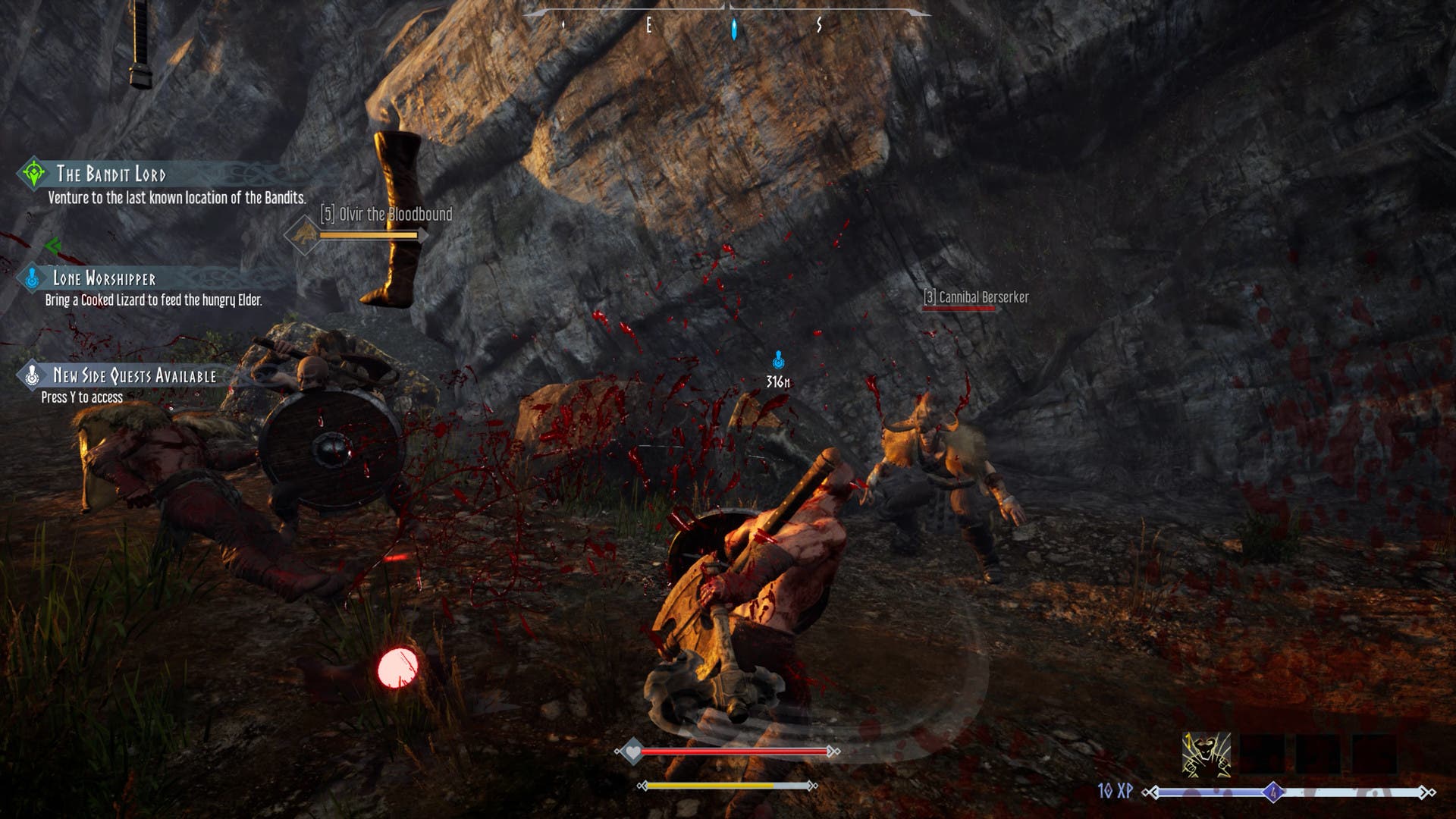 Unreal Engine 4 is a powerful engine, but the visuals aren’t there with RUNE II: Decapitation Edition. The performance was rather consistent, ranging from the 70-90fps mark with everything set to “Epic”. This is a big open-world RPG, and it handles things rather smoothly. The game’s art direction is grim. Though the game doesn’t look its best, with it often being very drab and plain. Compare this to the near twenty year-old RUNE Classic, and it lacks color and the mystical, mythical nature to it. RUNE II just looks dated, and that’s hard to overlook. 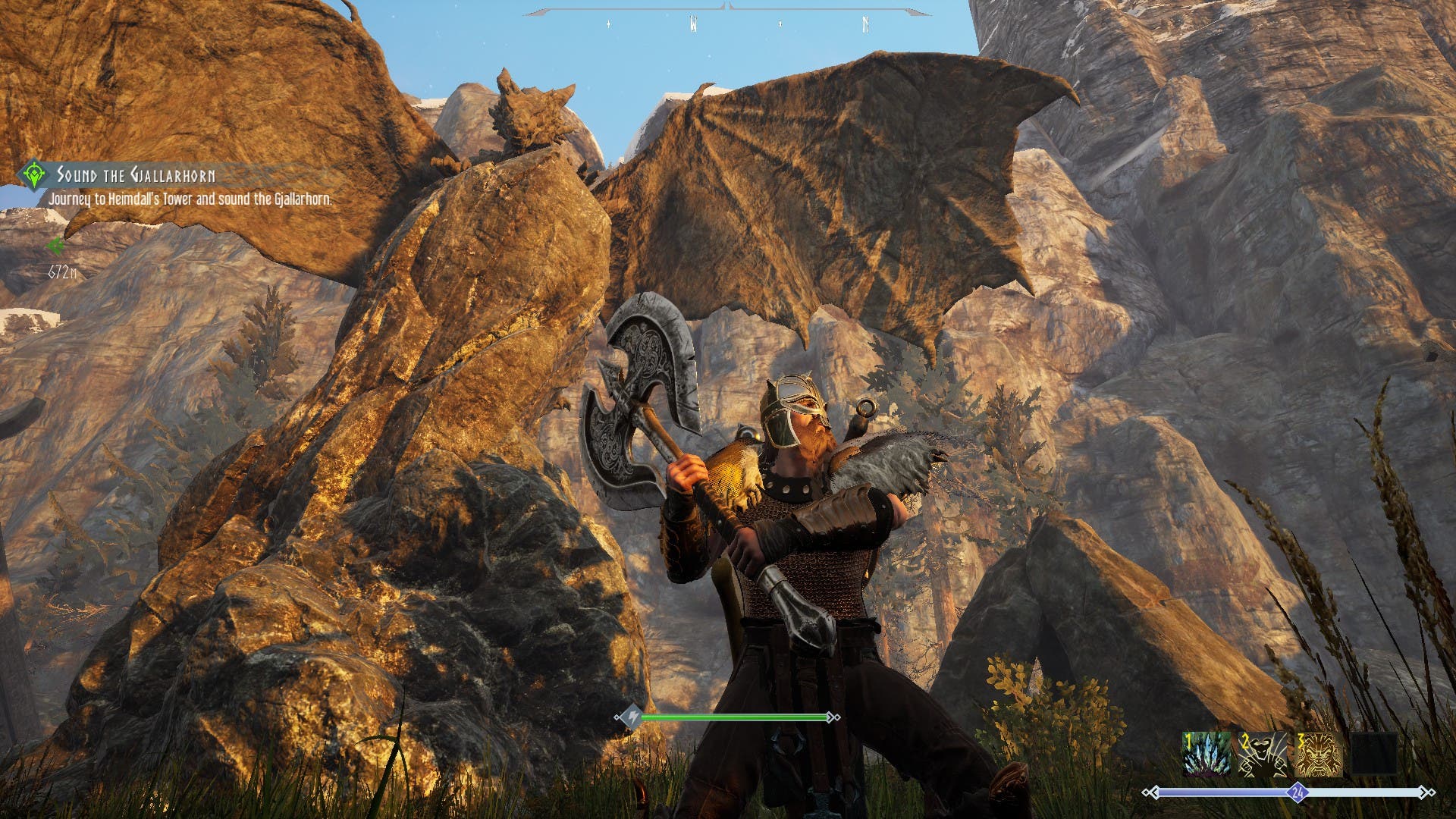 Without having played the original RUNE II at launch last year, I lack the understanding of the state that game was in. RUNE II: Decapitation Edition appears to be an improvement in just about every aspect. This game suffers from standard open-world problems like repetitive quest design, uneven visuals, and stiff dialogue; some of these things I suspect can’t be helped or fixed. For what issues remain, they don’t detract from the fact that I’m constantly booting up RUNE II: Decapitation Edition to begin the next quest. It can be a bit mindless, but it’s not aimless. I think it’s safe to say that RUNE II: Decapitation Edition has been saved from its own destruction by some passionate developers, and it delivers an enjoyable open-world RPG that has some rough edges, and should be given another chance at life.