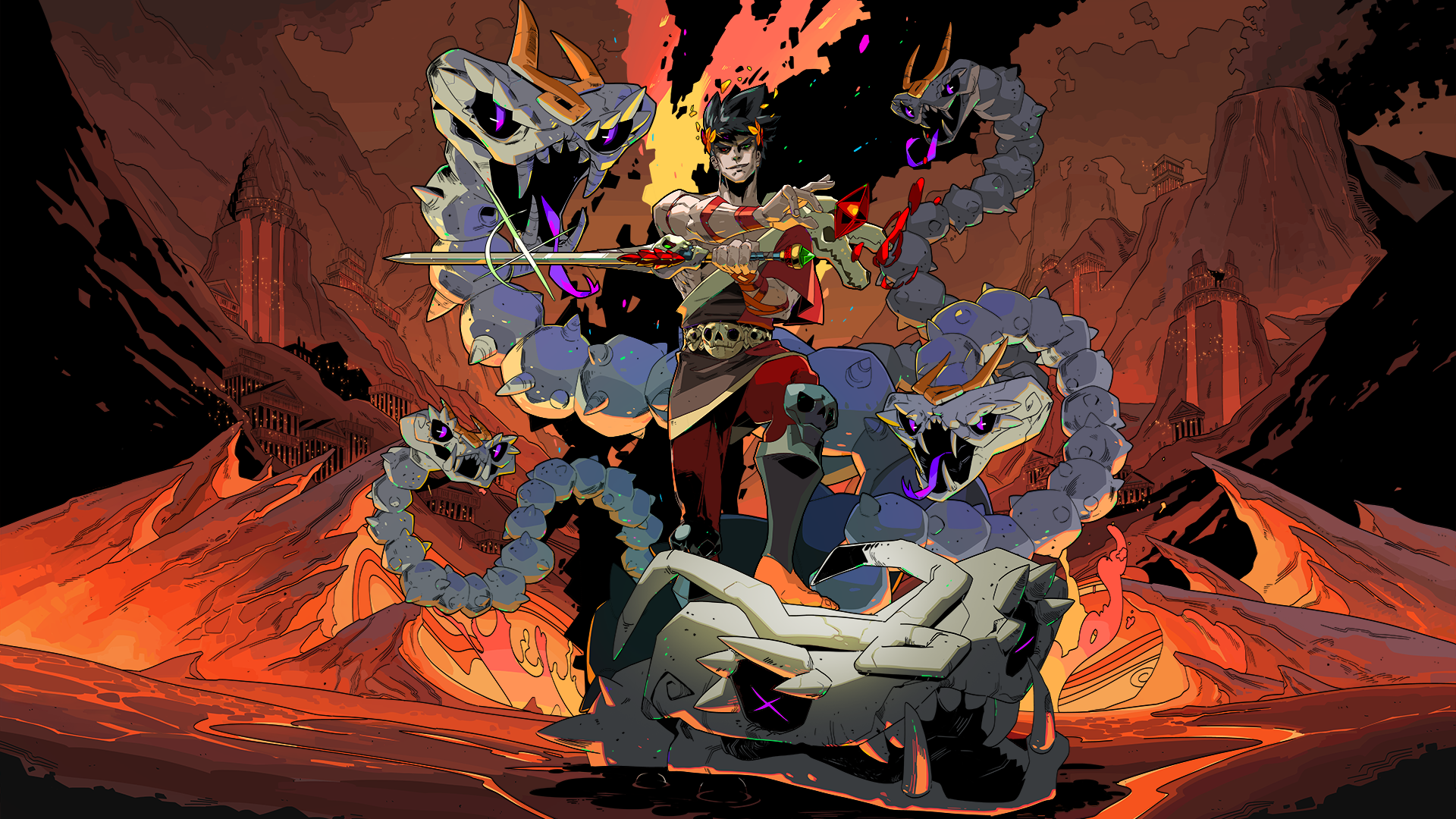 Rare is the occasion when a game comes along that doesn’t just raise a standard, but redefines it in a way that everything else which comes after it will be forced to reckon with. Hades is that game in so many ways, a particularly impressive feat in the constantly overcrowded and somewhat stagnant roguelike genre. Where some games are content to experiment with the standard formula in small ways that don’t always land, Hades boils the roguelike down to its essential elements and uses them to construct the quintessential manifestation of the genre, tightly interwoven with a compelling narrative experience that celebrates its core mechanics as much as it complements them. That new sound you’ve been looking for? Well, listen to this.

Every aspect of Hades‘ design and experience is purposeful, even integral. There is no element present that is not tightly coupled with each one adjacent to it; it is possibly the most harmonious concert of ideas in a video game I have witnessed in years. In Hades, as with all of Supergiant’s games, the story is the core pillar around which everything else is built, and while they historically have executed on this pretty well in the past, Hades feels like the pinnacle of their design ethos; the full, unfettered realization of the desire to build games that are incredible to play, and with stories and characters worth investing time and effort into. The very nature of Zagreus’ quest to escape the underworld serves as the basis for why the game is set up as a roguelike, and staple mechanics like procedurally generated/randomized room layouts across runs, Zagreus’s increase in skills and strength over time, and the reason he comes back and must persist over and over, are deftly explained through the game’s mythology, to the point where you are left only to think “well of course that’s why.”

There is literally no part of Hades‘ gameplay that does not have a sensible tie to the story and mythos, and thus everything makes perfect sense within the game’s logic. Zagreus grows stronger because the mirror of fate grants him power through the Darkness he accumulates; he returns to life because he is immortal and necessarily must reawaken in the Pool of Styx after each death; he has access to a diverse set of weapons because his father, Hades, has accumulated an impressive store of them over time from other deities and figures of note; he can buy assistance from Charon, the ferryman of the damned because who else is going to take all of those coins; rooms shift each time Zagreus leaves because the underworld is designed to prevent escape in exactly this fashion, and so too is the reason for the hostile shades which stand in your way; and of course, he is able to use unique abilities during his escape attempts because the Gods of Olympus seek to help him in their own way, even if their motivations for doing so are murky at best. 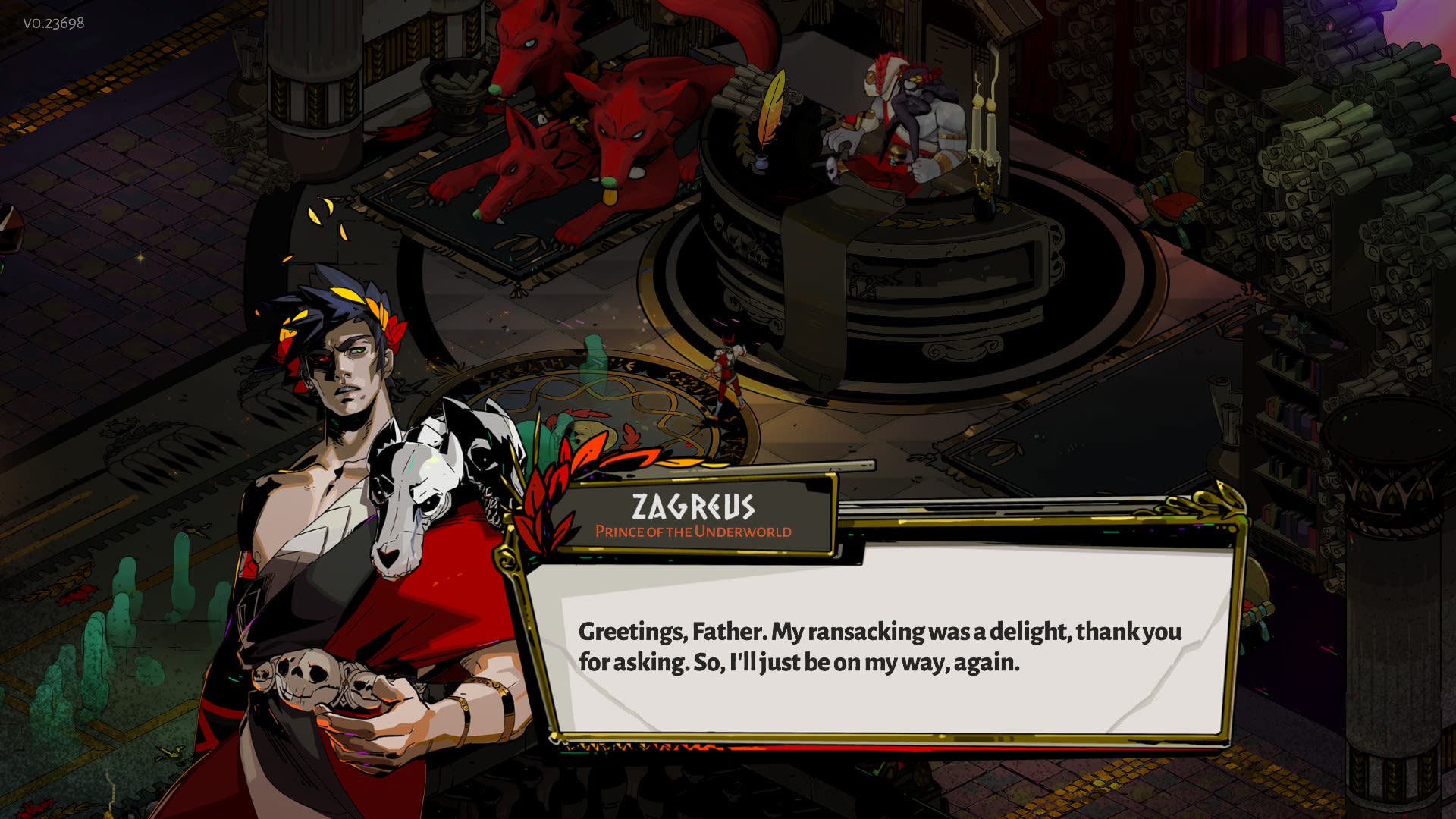 Everything is perfectly justified in this way, and all of it serves to help Hades get its hooks into you. As I spent time attempting more escapes and experiencing more of the story, deepening my relationships with the characters, and ultimately coming to take on Zagreus’ unrelenting pursuit of freedom from the underworld as my own, I felt the essence of Hades seeping in through my pores as it engulfed me completely. I have spent time lying awake in bed thinking about builds to try, idle moments during the day staring out the window contemplating the implications of a new revelatory narrative beat, stray thoughts about strategies for tough boss fights sneaking away time from my work day. It’s pervasive, and it has consumed me, and I am here for it.

It helps a great deal that the act of playing Hades is joyfully responsive and rewarding, one of those games where pushing the control sticks around and thumbing buttons and triggers in a dance that is equally structured and frenzied puts you into a flow-like state bordering on the sublime. Controlling Zagreus is precise and immediate, and he has all of the right abilities and movement options out the gate and no fluff taking up extra space in your head. Combat is like a twin-stick brawler (or shooter, depending on your weapon), playing out in rooms you peer at through an isometric view, and every hit lands with a satisfying combination of tactile, visual, and sonic feedback. As you collect boons from the various Gods themed with their particular set of powers or background, your basic abilities are augmented with active and passive effects such that everything you acquire is automatic and requires little extra effort from you save in altering your approach slightly to better suit the set of boons currently at your disposal. Boons increase in strength and combine in surprising and effective ways, so every escape attempt feels unique and you will undoubtedly discover surprising ways to use your favorites. It is a thoroughly enjoyable and exciting playground in which you can experiment with minimal risk (especially as you reach the “endgame”), and Hades can and will continue to surprise you even after you’ve put twenty or thirty hours into it. 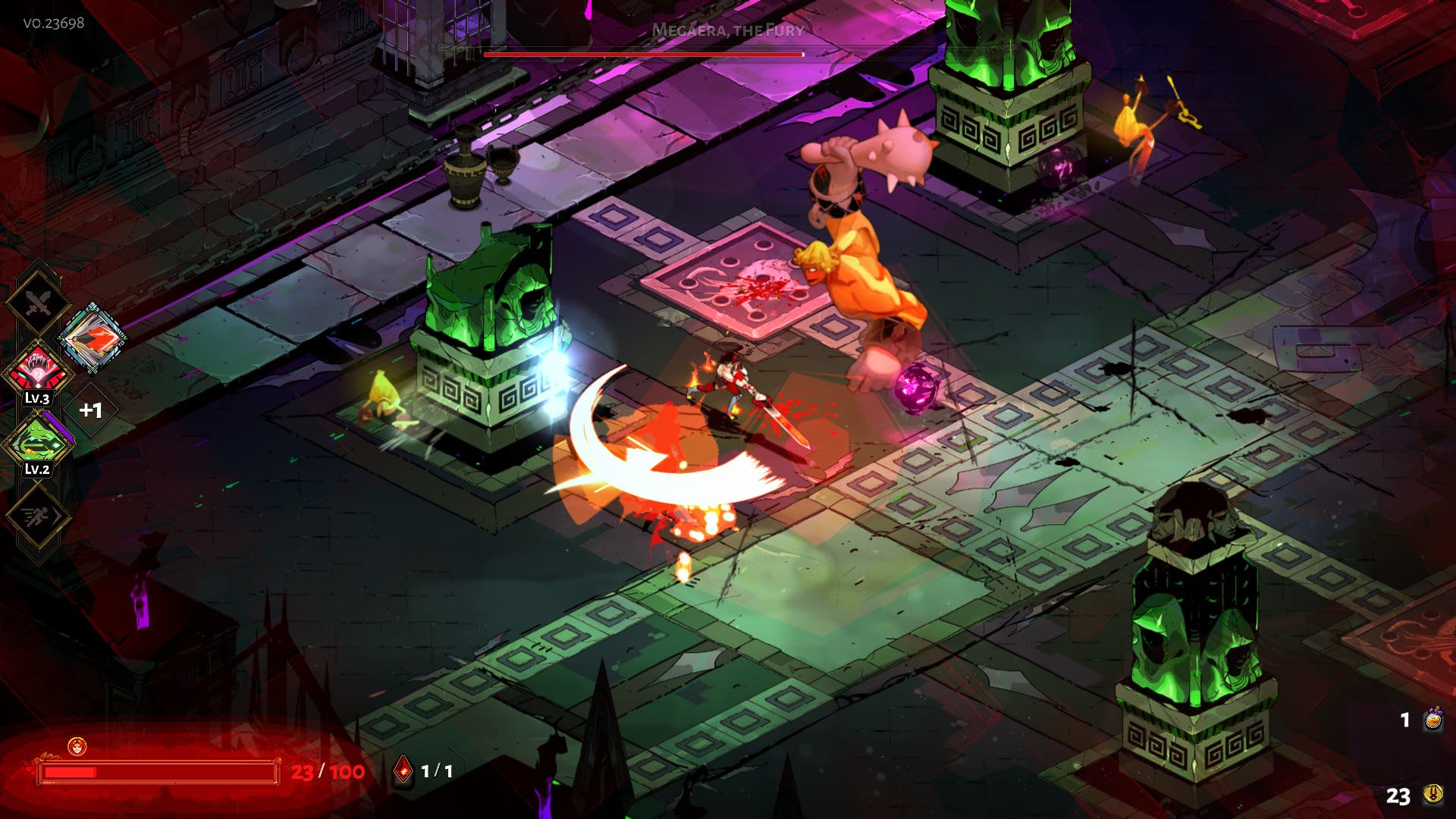 For me, the real beauty of Hades is in how you progress in your own skill and expertise in it separately from unlocking abilities, weapons, and trinkets. One of the things I was particularly hoping to address in this review was the announced cross-save feature between PC and Switch, which has been delayed due to some technical complexities with implementation. For folks who can play on both platforms, being able to transfer progress would be a huge boon, as the game looks incredible on the PC, but also plays extremely well on Switch and I’d personally love to have some flexibility between playing at my desk or my couch. Faced with a deep desire to not put the game down while spending a weekend away from home, I decided to just start a new file on my Switch and rapidly discovered that the seven or so hours of progress I was “losing” wasn’t really lost at all. Sure, I had to unlock some abilities and work through early parts of the story again, but I was delighted to realize that by my third or fourth run I was consistently making my way back to Elysium, the game’s third area, and running up against the region’s boss fight regularly. While it’s true of most games that skill growth persists across sessions, Hades proves out that it rewards skill as much as it does progression, and it’s incredibly empowering as a player to sit down with a fresh file and be nearly as effective as you are with a full arsenal of unlocked bonuses at your disposal.

If the story is the foundation upon which the House of Hades is built and the mechanics are its supports and guts, then the visual art, character design, voice acting, sound design, and music are an incredible complement of finishes and decoration that bring glorious form to the expertly honed function of the structure. Every room, every character portrait, every single bit of minutiae you lay eyes on is rich with detail and full of life, portrayed in an incredibly rich hand-drawn style that looks amazing both as static scenes and in motion. I love all of the small nuances there are to discover in every area. I love the way each character’s portrait conveys so much about their personality and their intricate dress is so tightly woven with their identity. I love the way that Hades’ beard is used as an icon bordering on a brand throughout the game, appearing on everything from Charon’s coins to the sigils that appear to summon new shades. 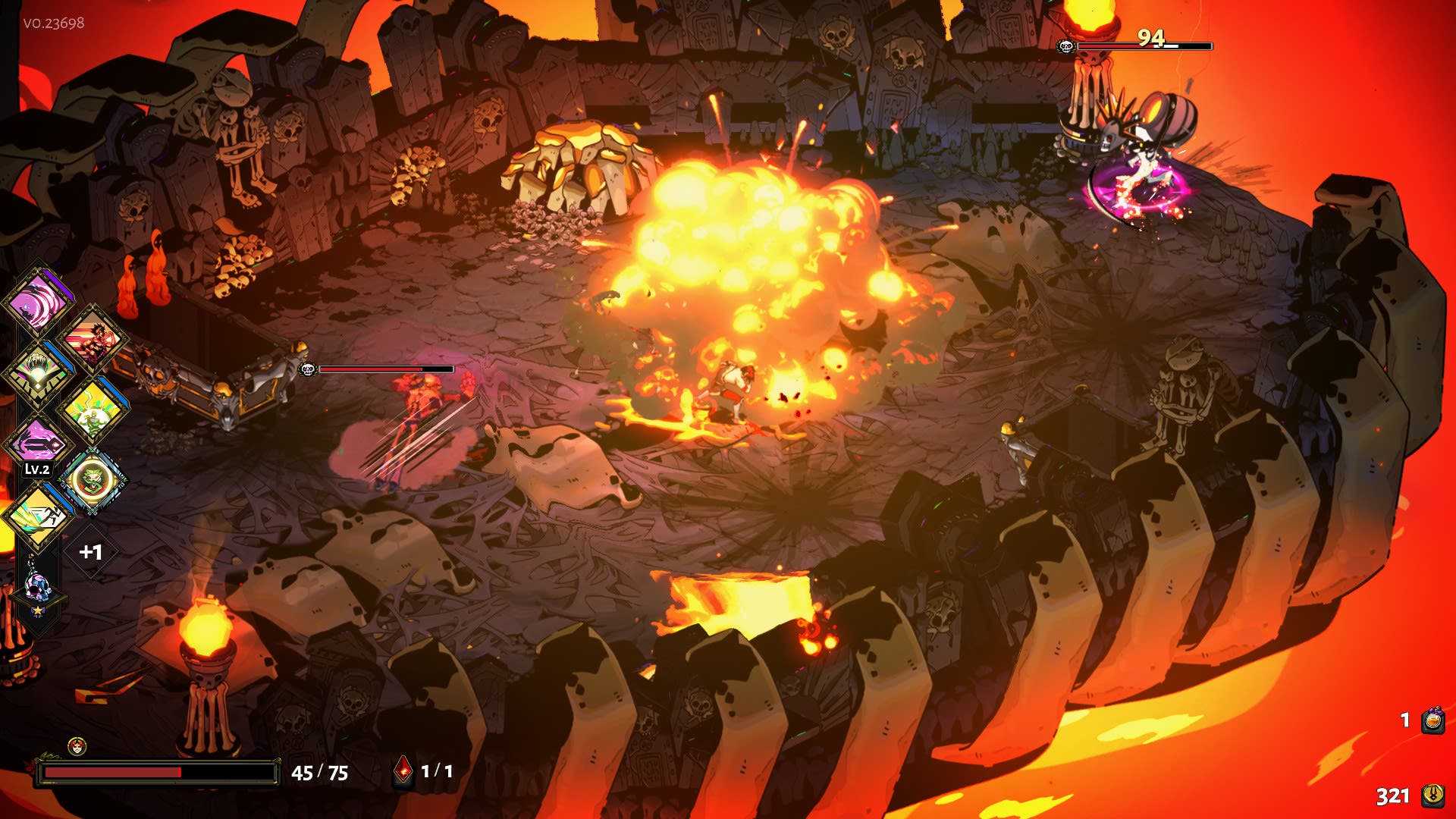 I love the satisfying “chonk” of opening doors and the sound of hammer against metal you hear when selecting a boon, or that indescribably satisfying tone that plays when you summon a deity. There are so many recorded voice lines that you can and will play for ages before ever hearing something repeat, and you will establish deep relationships with each of the characters as a result. I look forward to every character interaction solely to hear them speak, as I have grown so fond of each of their voices, and the way in which so many of them are soft-spoken and weary in the way only immortals who have been alive for too long and seen too much can be.

And holy shit, the music in Hades is beyond comparison. I am a sucker for a good score, but Darren Korb’s compositions for Hades are truly phenomenal, immersing you in the world and standing on their own as phenomenal musical works. Instruments common to ancient Greek music are heavily featured, lending a grounding authenticity that transports you into the underworld while the expertly integrated contemporary sensibilities of percussion and rhythm get your heart thumping and your adrenaline coursing. It’s also expertly written so that the pieces which play during your forays into the underworld evolve in complexity and intensity as you push forward through each room, and while the themes are punctuated by brief breaks between bouts, the pressure slowly mounts until you enter a boss chamber and you get the theme of that area in its final, most confrontational form, and it is a divine progression. 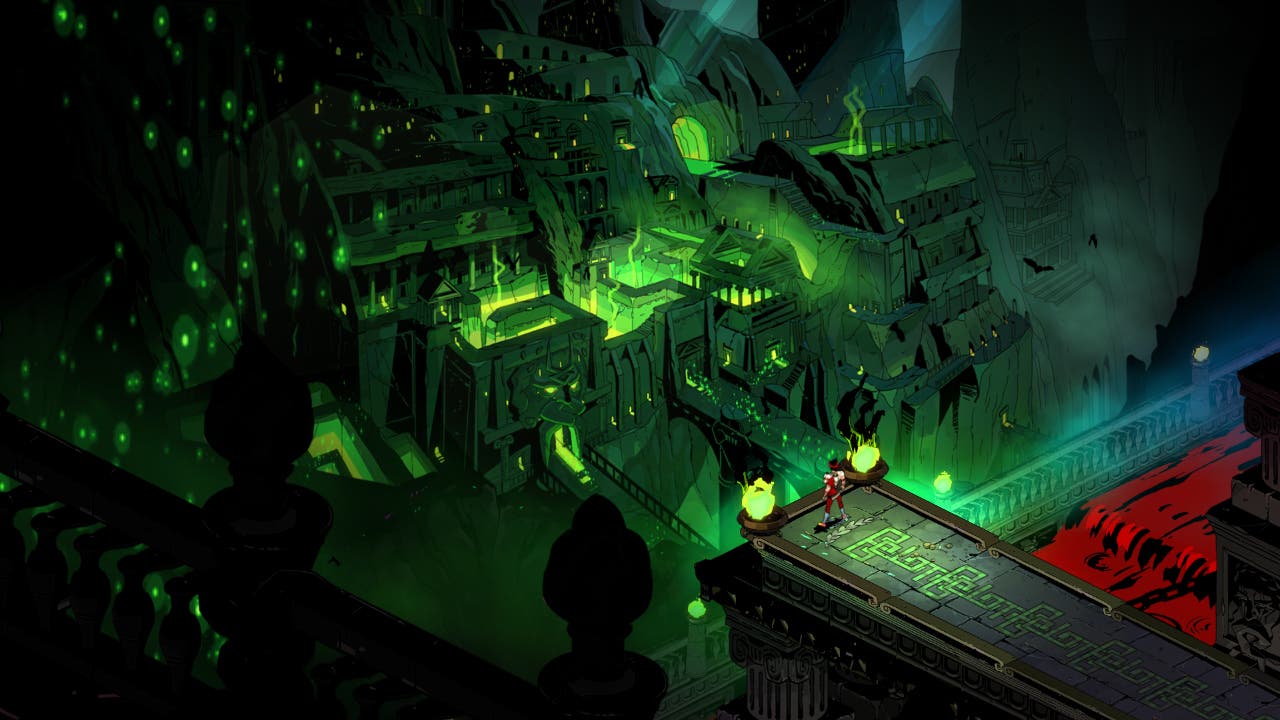 I honestly could go on about all of the reasons why Hades is so incredibly good for another 1500 words. There is so much to unpack and explore here, but at a certain point you’re better served by just playing the damn thing yourself. Hades is Supergiant at it’s pinnacle. It is the culmination of a decade’s worth of buildup to an unparalleled experience that leverages all of their expertise, and it exemplifies the possibilities of what early access cycles can be with a supportive community and a responsive, talented team of creators. It feels as though everything Supergiant has made prior has been rehearsal for this triumphant performance, but better still, it shows the heights they’re capable of and leaves you with the strong impression that this is just the beginning of what they have in store. Don’t wait for a sale, don’t wait on Hades for any reason; if you are even remotely interested, you absolutely have to play it right away, and I promise you will not regret it.