Horror video games have taken many shapes over the years, ranging from more action-focused titles like Resident Evil to psychological thrillers like Amnesia, with the common thread between them being predation upon the player’s sense of vulnerability. Jump scares and cheap thrills are the favorite tools in the pursuit of spooking players, but few manage to instill a sense of creeping dread so well as The Medium does. It creates tension that begins as a faint hum, and as you learn more about the places and people you’re investigating, it slowly builds into a steady buzz that keeps the knots tied in your stomach even during the game’s downbeats. Combined with a highly cinematic presentation, some truly excellent environment art, and unique game mechanics that integrate well with the storytelling, The Medium is a horror game that can be deeply unsettling but is compelling enough that it’s worth pushing through the discomfort.

I’m only the most minor fan of horror, and I like it only in small doses spaced far apart. I don’t seek out scary games and I’m not big on major spooks, so I need a strong narrative to entice me to engage with the things that go bump in the dark. This is something that stands out immediately about The Medium; from the very first moments exploring the apartment of the protagonist Marianne’s deceased surrogate father, it is invested in telling a story worth listening to. Marianne’s melancholy, curious voice over serves as a grounding point for the player as they come to know about the world they find themselves in, Marianne’s abilities, and her place in that world. The very first scene exploring Jack’s now-abandoned apartment while preparing for his funeral sets the stage for the way the game uses strong environmental art to show you what’s happening in addition to what the dialog tells you. It’s a moody, often dark experience that uses light as punctuation to the isolating and pensive sensations of being left to explore forgotten places.

Marianne is gifted with the ability to see and communicate the Spirit Realm, an alternate version of our own reality where both the dead and echoes of the past linger. For most of her life, Marianne has merely glimpsed into the other side to help troubled souls pass on, but through the events of the game she embarks on a journey that unlocks more of her abilities, and requires her to use her intuition and intelligence to overcome obstacles and solve problems in both the Material and Spirit worlds alike. The Spirit World is a bizarre counterpart to the Material World; locations are the same, but varying degrees of organic-looking growth overtake familiar surroundings, so that a desk will often appear covered in (or made of) unknown fungal spores, or entire walls will be made of pulsing tree roots, with everything bathed in a single hue that acts as an emotional grounding for the scene. In the beginning of the game, the Spirit World is dominated by warm orange and brown tones, but in further locations things shift to murky browns, melancholy blues and sickly greens. 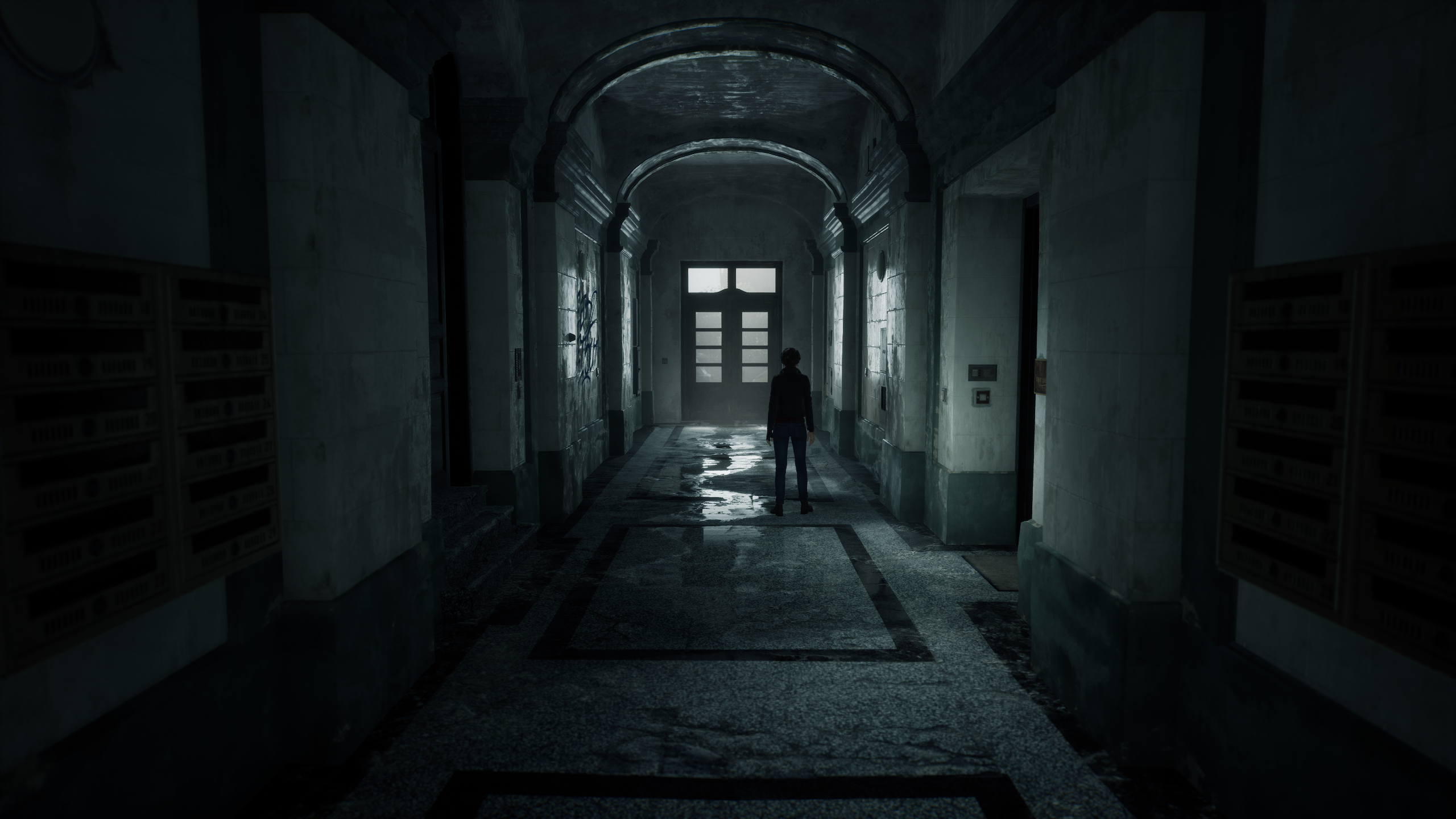 You’ll primarily interact with the Spirit World via The Medium‘s “Dual Reality System,” a mechanic which shows you both worlds alongside each other at once to see how the Material World and the Spirit World interact. Marianne exists within both simultaneously, and a split-screen view allows you to control her through both worlds and interact with different points in each of them. It’s a clever trick that pulls back the veil between the two realities, and has some cool on-screen implications for times when Marianne is interacting with spirits or objects not present in the Material world. The spirit version of Marianne sports shock-white hair and ethereal fungal discs on her arm that glow to show her available spirit energy she uses to perform certain actions, giving her a distinct appearance that feels right at home alongside the porcelain-masked faces of the spirits she meets.

You’ll spend the bulk of your time with The Medium exploring and looking for clues, because at its core, this is an adventure game, and a damn well produced one at that. It takes the contemporary approach to adventuring, where solutions generally require you simply to take in the environments long enough to find what you need to progress, and for the most part the way the puzzles are designed make sense for the conceit of the game itself. It even does a fine job of hinting at solutions for things which might not otherwise be obvious, weaving them into the story and mechanics in logical ways. Your critical path in one reality might be blocked by an obstacle in the other, and you’ll have to find ways to open the way forward or work around whatever’s in your way. Sometimes this might just be finding a key for a locked door, or the more grotesque equivalent of slicing open a thick skin-curtain with a spirit razor. You know, normal spirit world stuff, definitely not the kind of thing you find in the dilapidated ruins of a possibly sinister government-run workers’ resort haunted by a malevolent devourer of spirits.

As you dig deeper and explore Niwa, the aforementioned abandoned resort-turned nightmare playground, Marianne encounters challenges she’s never before seen, having to piece back together the mangled souls of victims of The Maw, Niwa’s resident spiritual terrorist and primary bogeyman. As a way to explain some of the more horrific entities you’ll be tasked with dispatching, The Medium explores themes of child abuse, sexual abuse, sexual assault, and psychological or emotional trauma as means to provide these twisted nightmares with a plausible raison d’etre. While the game takes care to strongly imply these incidents rather than explicitly depict any of them (with the exception of one case of audio cues for an instance of physical assault), there is no question about the nature of the atrocities some of the characters have suffered.

I appreciate the choice not to depict most of this explicitly, and I think The Medium does well to incorporate these very real themes with care and uses the grotesque as an allegory for trauma in ways that mostly work, and it largely avoids the pitfall of being edgy purely for the sake of it. I can’t help but wonder if it would have been possible to explore the impact of trauma with less challenging subject matter, but it’s worth noting the sheer frequency of these kinds of trauma in people’s lives, and the importance of normalizing discussion of them. In this case, The Medium is using abuse and assault as catalysts for psychological pain in service of illustrating the devastating impact of those acts on victims’ lives. 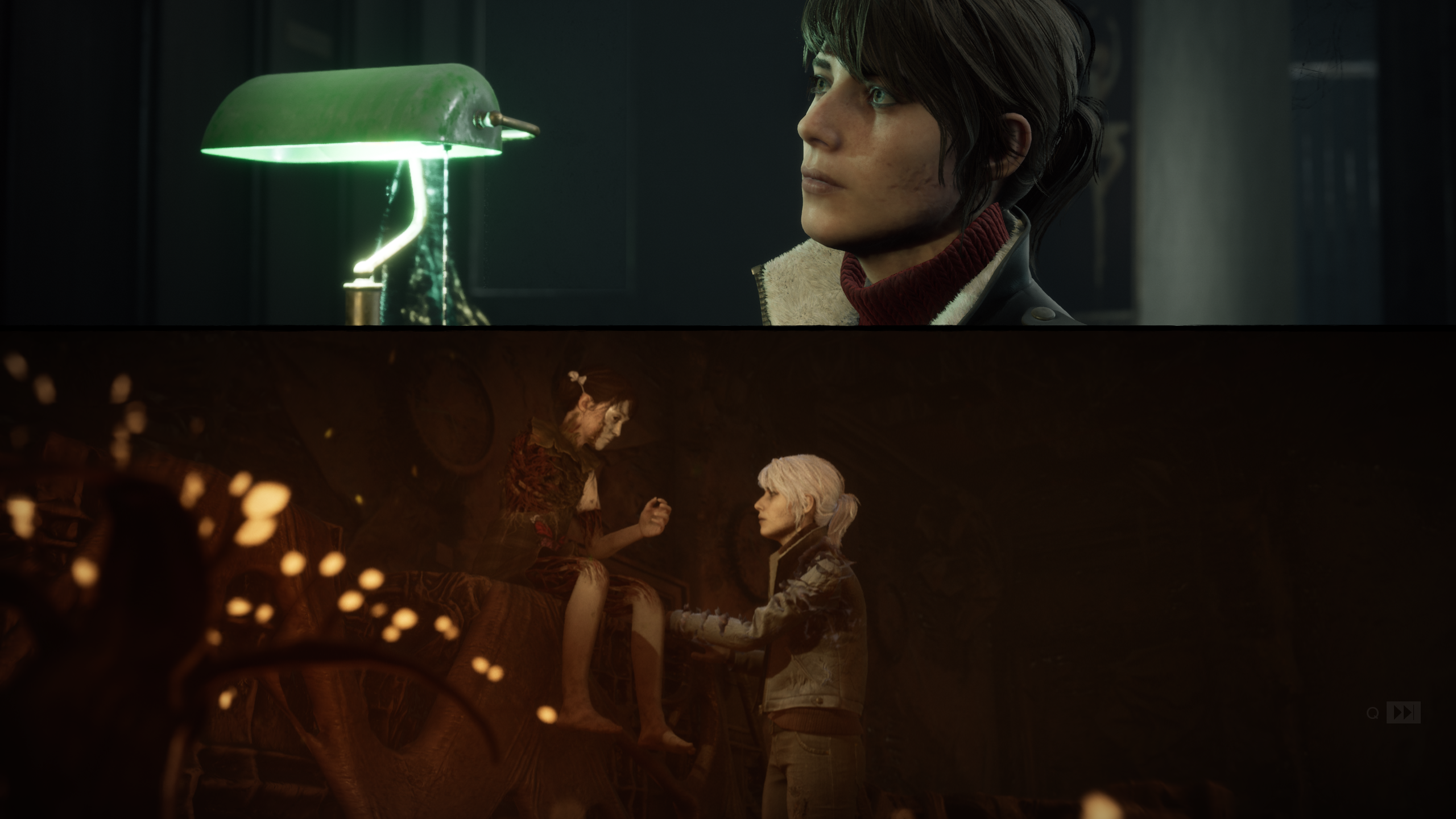 The more perplexing issue of The Medium for me is that of its performance, which is mostly good but also fairly inconsistent. On the surface, the game doesn’t appear to be particularly graphically demanding most of the time, and yet even on an 8-core i7 CPU and an RTX 3080, I experienced several drops in frame rates at times which didn’t necessarily make sense for what was being rendered on screen. While there are some expected decreases in frame rate during Dual Reality sequences, when the game is rendering two sets of geometry, models, and textures side by side, most of the time these moments aren’t the major culprit. Playing at 1440p, with Ray Tracing features enabled and DLSS set to “Quality,” the game typically maintains a respectable 100+ frames per second. However, it can inexplicably drop well below this mark, and in some scenes fall into the 40s or 50s for reasons I can’t possibly explain.

Ray tracing isn’t even really the “problem” here, as I have experienced the same issues with it turned off, and seemingly the only way I can guarantee the game will maintain a steady 60+ FPS target is to have ray tracing disabled but DLSS still turned on. This points to some probable optimization issues with the game’s engine which may be smoothed out over time, but I have to imagine the impact of this is felt much more strongly by the majority of players who will be using graphics cards from one or two generations back. 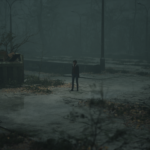 The Medium Screenshot rtx off 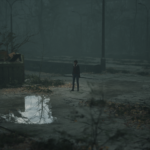 The Medium Screenshot rtx on 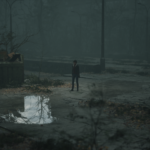 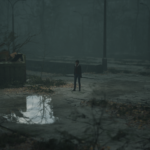 Regarding the ray tracing implementation, it’s actually quite good and makes a significant impact on scenes where reflections are present, and it really amps up those atmospheric moments with eerie lighting. If you have hardware capable of utilizing it, I strongly recommend keeping it turned on, as it really does add a lot to the visuals and overall sense of immersion.

The Medium also supports integration with Corsair’s iCUE ecosystem, adding lots of ambient effects to systems outfitted with Corsair’s array of RGB-lit products. While often I have found these integrations to be more gimmicky than anything, I was pleased to see Bloober Team utilize the SDK in a way that feels more akin to extending the ambience on screen to your peripherals. The effects are all well and good on a keyboard and mouse, but they really shine within your computer case, where care has clearly been taken to coordinate animations for maximum effect. I’ve got fans, a CPU cooler, and RAM all from Corsair, and was treated to some great ambience as a result. Lights on your components will default to whatever the prevailing lighting color in the current scene is, mostly operating in the background, but will come to life when unleashing blasts of spirit energy, taking energy from spirit wells, or using your spirit shield to protect from the forces in the darkness. You can check out the embedded video to get a feel for how it works. It would be great to see how Corsair’s LT100 lighting towers would work with this but given the fullness of the experience I’ve seen, I’m fairly comfortable saying this is among the best implementations of iCue integration I’ve seen.

It’s hard to make a clear cut recommendation for The Medium, because horror games automatically aren’t for everybody. As somebody who only enjoys them occasionally, I can say that this is a strong entry in the genre and is something I can say that anybody who is interested in it will probably like. It has a strong narrative, the setting is interesting (and reminiscent of Pripyat and the general specter of the Cold War in Eastern Europe), and I think it does a great job of pulling you into its world and making you care about what’s going on. That’s not something most horror properties can typically do for me, and there’s some real talent in both the writing and voice acting teams that worked on The Medium.

While rough around the edges in a few areas, overall The Medium is an excellent adventure that’s not lacking in scares, and is thoughtful in how it approaches its subject matter. I felt the tension, the dread, the sadness, and the fear in those moments where they presented themselves, and I felt a connection to Marianne and her story that I don’t often feel in many games, regardless of genre. It’s a beautiful game to look at and the art direction is excellent throughout. The Medium has a lot of heart and it wants to tell you important things, if you’ll listen. I’m not generally one to say that I enjoyed my time with any horror game, but this is a case where that is absolutely true for me, and that alone is reason enough for me to say this is a world worth experiencing.