Stepping inside the dome for the first time, you enter a place that feels both real and imagined; affixed in reality, and made of memories. This dreamlike sense of grounded surrealism sets the stage for your journey through Maquette’s story, in which you unravel the narrative by solving environmental puzzles entwined with the exaggerated locales and features of Maquette’s chapters. It’s a tale of love and loss interwoven with the game’s artwork and environments, in ways that are sometimes novel and others less so. While the primary draw of the game from the outside is its art and its puzzle design, it it is clear from moment one that the game’s true emphasis is on it’s love story, and it bets everything on the successful marriage of these elements. 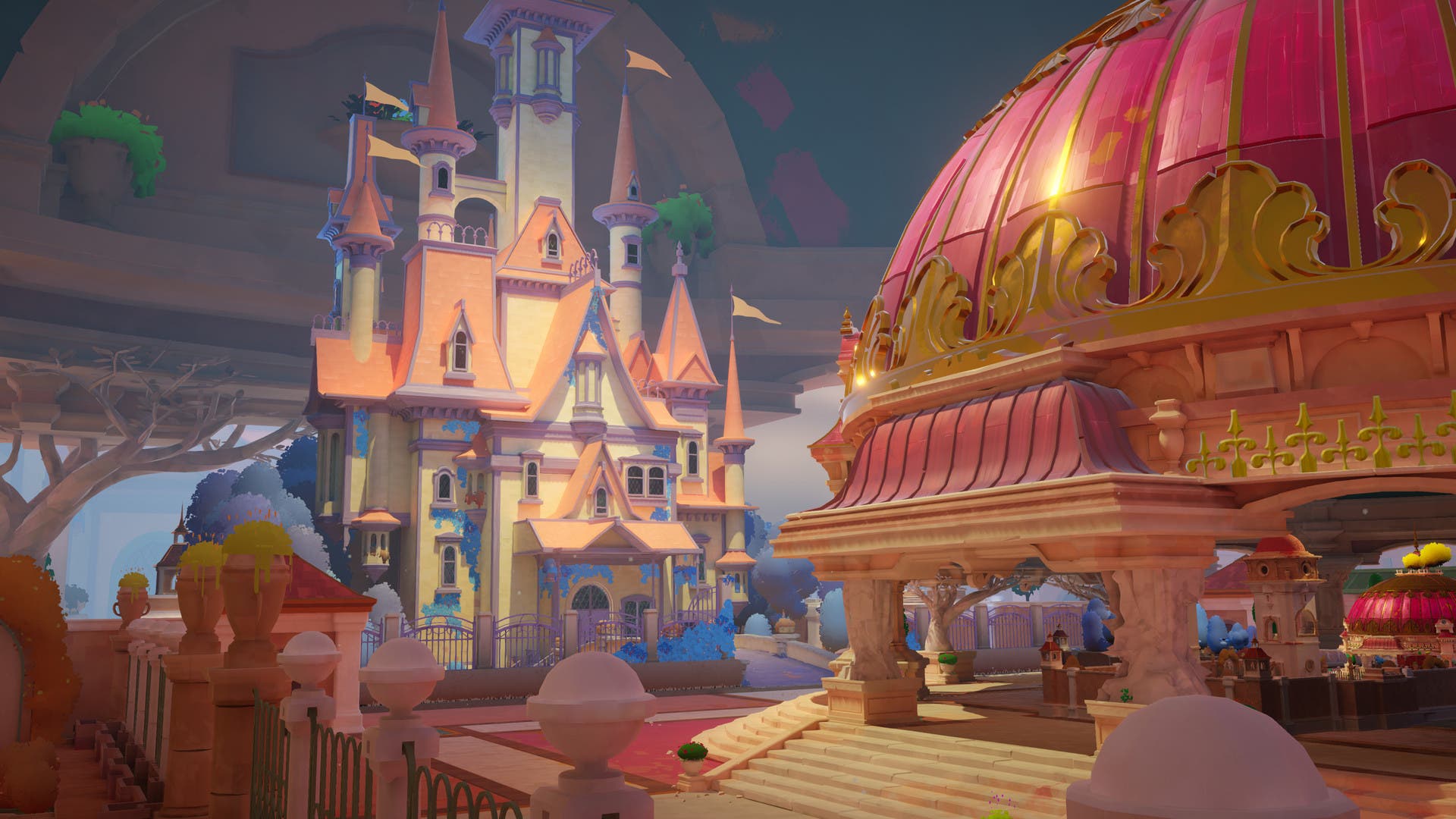 After the initial introduction that has you walking through a dreamy pastel garden at twilight set to a track that takes direct inspiration from the Summer of Love, you are given a brief tutorial of how to interact with your environment and then you’re transported to the main event. Each chapter is composed with a set of four vignette locations arranged in cardinal around a central dome, under which lies a miniature maquette of the whole area, complete with each location and all of its features, and yet another smaller dome. Underneath the smaller dome, you can just make out the edges of another, tinier replica. You may also quickly realize that even objects are replicated in the smaller versions, and when you first pick one up and move it is when the first major reveal happens, as you hear a gigantic thud echo behind you and you realize the massive cube that was in your way has just fallen exactly where you dropped it in the smaller replica.

The game’s primary puzzle mechanic centers on moving items around the larger environment, either directly or by manipulating their miniature equivalent. Not long after you crack this, you’ll discover you can also use the connection between the different scales of the environment to “change” the size of any item by moving larger or smaller versions of them through the various stages of the maquette itself. So now, in addition to moving seemingly immovable things or to otherwise unreachable places, you can also grow or shrink objects to suit the needs of a given puzzle. 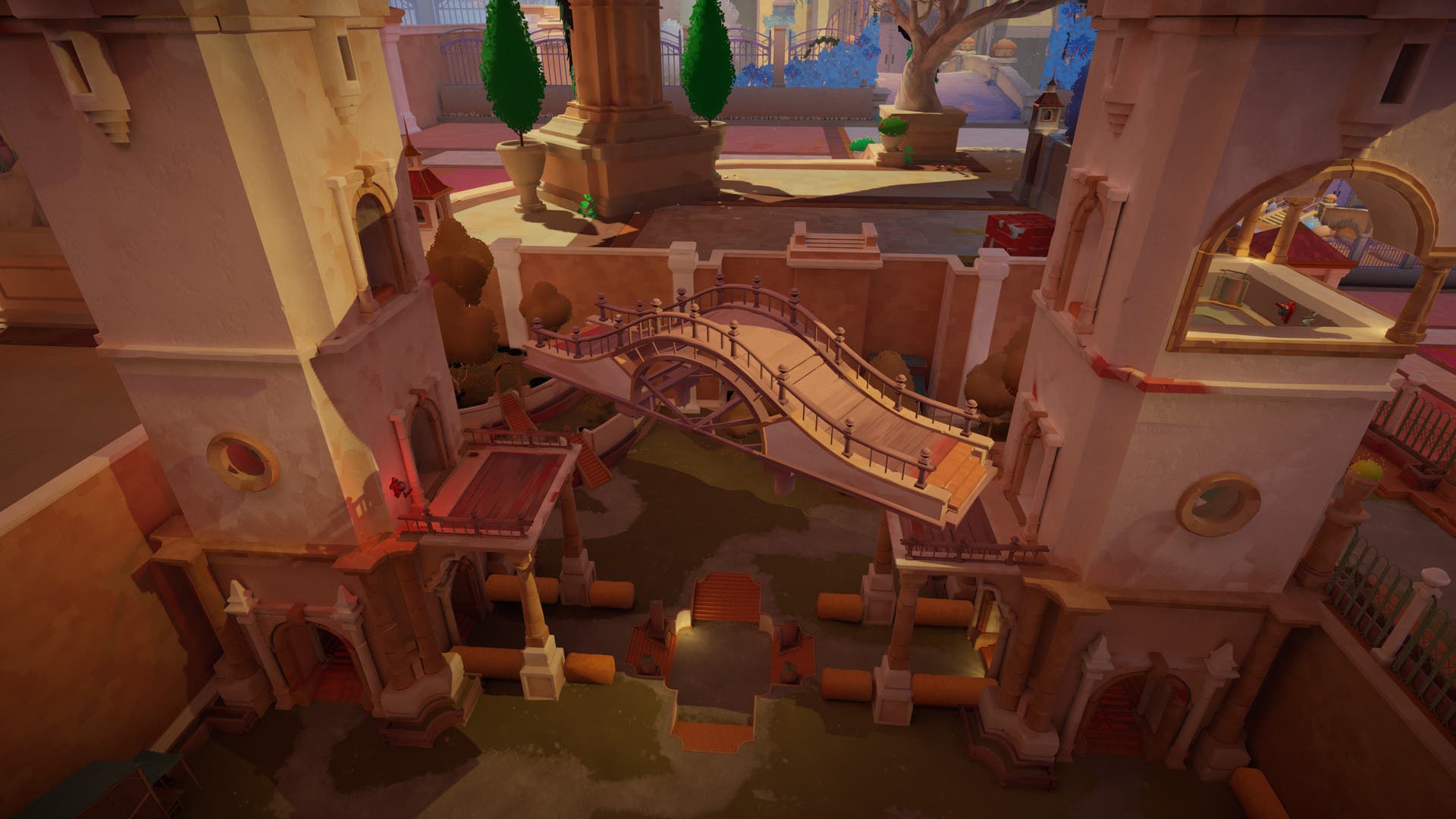 The result is, especially early on, some fairly novel ideas for puzzle design that are delightful to tinker with, and on its face it seems like there’s major potential for this mechanic to scale along with the game as you progress. The reality though is that there’s a limit to how far this idea can be stretched within the confines of the environment and story constraints, and the moving objects around takes a backseat to exploring the environments before the game’s halfway point. To compensate, Maquette mixes in some other unrelated puzzle designs that rely on things like color-matching glowing stones to magical barriers that dissipate in their presence, or pushing objects through holes to make them accessible in new areas. Some of this works, but often these other mechanics feel disjointed from the overall theme, or married in a way that is functional but not necessarily harmonious. This ends up being an ironic parallel for the story arc the characters experience, which hopefully isn’t intentional as the implication of putting player enjoyment in the backseat in service of illustrating conflict through mechanical friction would be less than savory.

The main reason this rubs me wrong is that I was expecting this build and layering on the central mechanic, similar to what occurred in The Witness, and I was excited to see the possibilities explored. And while Maquette certainly does experiment and try to iterate on its interaction concepts, it is naturally limited in nature and it is intentionally a significantly smaller scoped game (clocking in right around 3 hours of play time), so this expectation may have been mine alone, but I was still a little let down at where things landed. 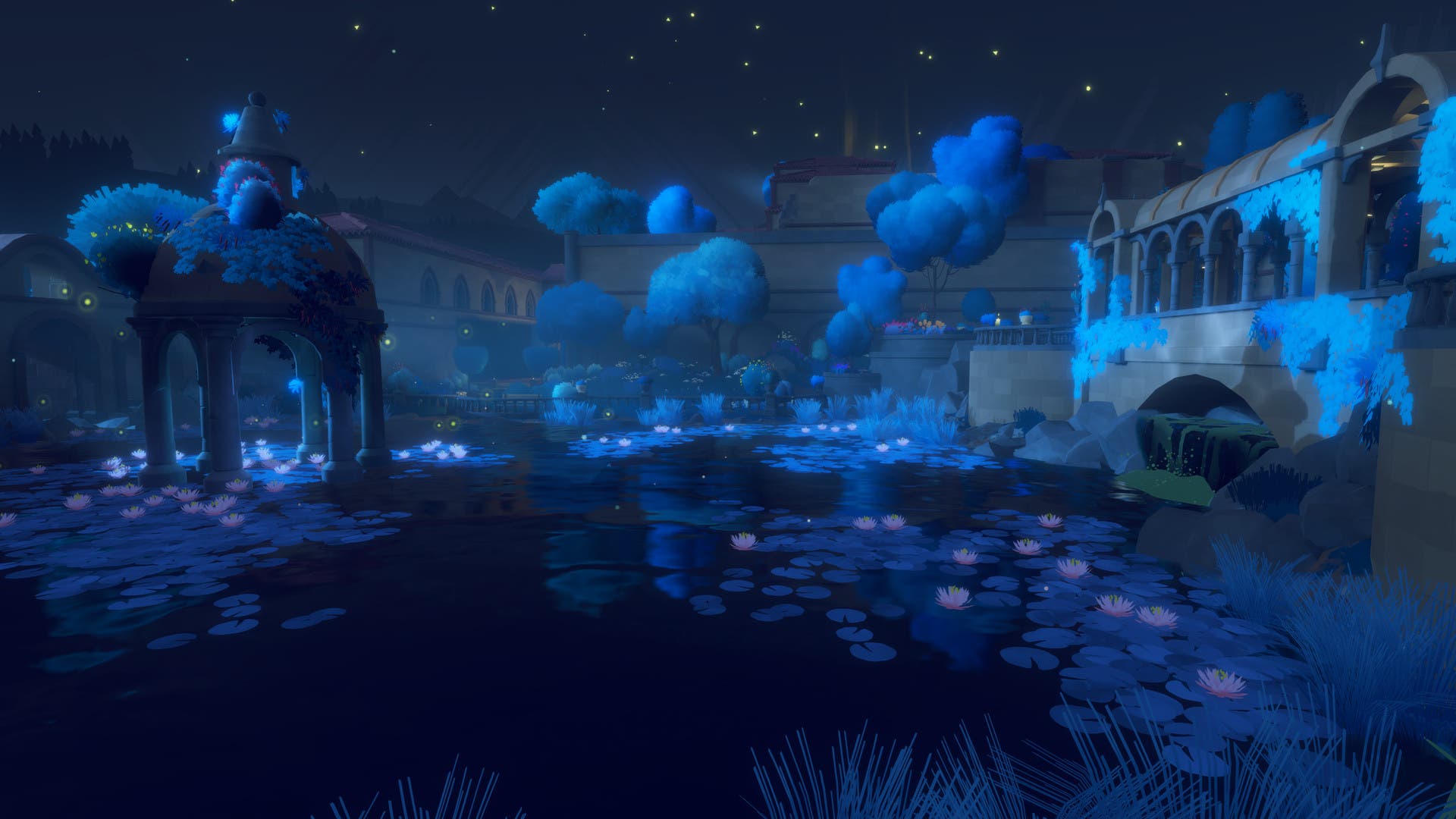 Progressing through puzzles reveals more of the story of Kenzie and Michael’s relationship, either through text seemingly from Kenzie’s journal, or little snippets of conversation played out over animated sequences. The chapters themselves parallel the relationship’s path, starting off in the very beginning when they have a chance meeting over shared interests, and following their journey through a typical adult relationship of bonding, tightly coupling, experiencing friction and differentiation, drifting apart, eventually separating, and the final chapters following Kenzie on her path of recovery from heartbreak and self actualization. It’s a charming enough tale, and it feels very familiar and accessible to anybody who’s experienced navigating any kind of romantic relationship as an adult. The voice acting here is solid, as would be expected from the amazingly talented Bryce Dallas Howard and also talented Seth Gabel, and it goes a long way toward helping sell the story and create a connection with the characters.

There is a distinct and obvious intent here for the story, the environments, and the puzzles to be tightly interconnected, dependent upon and in service of each other. In theory, it’s a nice idea, and there are moments when this does work, but for me there are equally as many where it doesn’t, either from just falling short of the mark or some connections feeling too forced or requiring too much of a leap. There are clear moments in the puzzles and environmental design which are connected directly to the characters’ emotional states, and there are moments of symbolism which FEEL like they should be representative of something but I literally could not figure out what it was supposed to be, to the point that I became convinced I was over-analyzing. 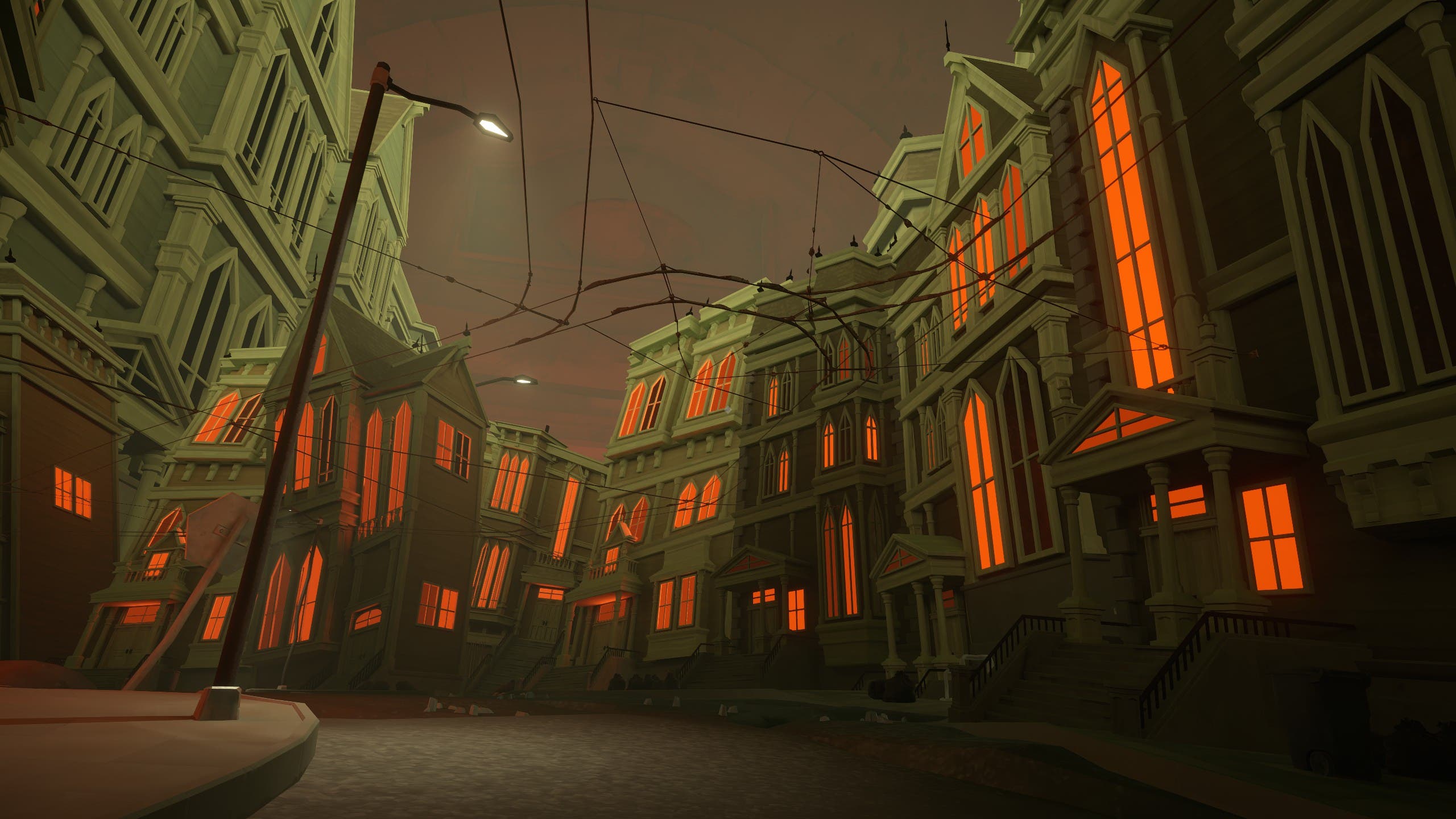 I’ve mentioned that the game’s art and design are really lovely, and the environments are extremely pleasing to walk around and explore, with one curious exception. At the time I played Maquette for review (just prior to and immediately following its release), the game had some unexpected performance issues that I also found fairly jarring. Technically, the game runs on the PC at 60+ frames per second, and it’s evident this is the case when standing still and watching things move in the environment, or when a canned animation and camera movements are playing out on screen (for example, when inserting a key into a lock). However, the moment you start moving in the world, there is a bizarre frame pacing issue that makes the game feel as though it’s running at 30 FPS or less, even while objects in the space continue to animate at a higher frame rate. It seems to be an issue with the game’s camera and player movement that I frankly haven’t seen before, and it took me a good ten minutes to get used to it for both of the two play sessions I used to complete it. It’s possible that this has been addressed post launch, but with the launch-day patch at my disposal, it was still an issue, and one that I noticed readily.

Otherwise, Maquette is beautiful to behold and the environmental and lighting effects, combined with the art direction, create a calming albeit curious space that is the perfect backdrop for exploration. The visuals actively create a space for your mind to think abstractly about spatial relationships and perception, and the fact that the game encourages your brain to engage in that mode is really impressive, and even commendable. If and when the development team can address the smooth camera movement issues, this game will be an unequivocal visual feast, and possibly the closest thing to walking through a dreamscape created by your subconscious that you’ll be able to play any time soon. I don’t often say this, but in many ways Maquette seems like a prime candidate for a VR release, as being able to explore it in a highly immersive setting would be a real treat. 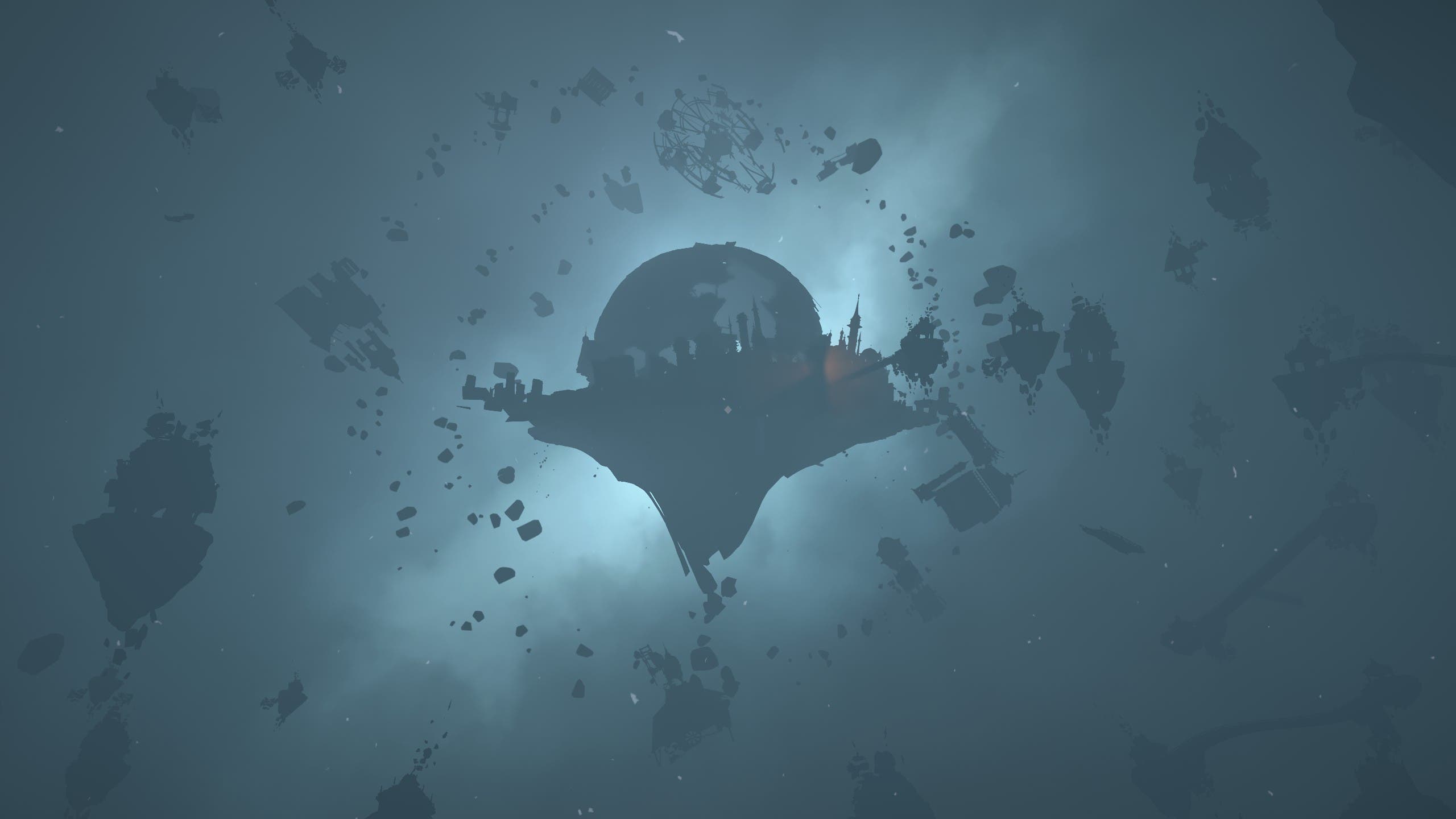 I want to love Maquette. It’s is a solid puzzle game whose moments of brilliance are regularly interrupted by stumbles and rough spots. It soars much more often than it dips, but there are enough times where things don’t land that the experience can feel disruptive. While some extra time to polish some of the rough edges would have been majorly beneficial, it’s still a wholly unique piece that merits your time and attention. Just know going in that it’s imperfect, as all of us are, and try not to let those little details get under your skin.