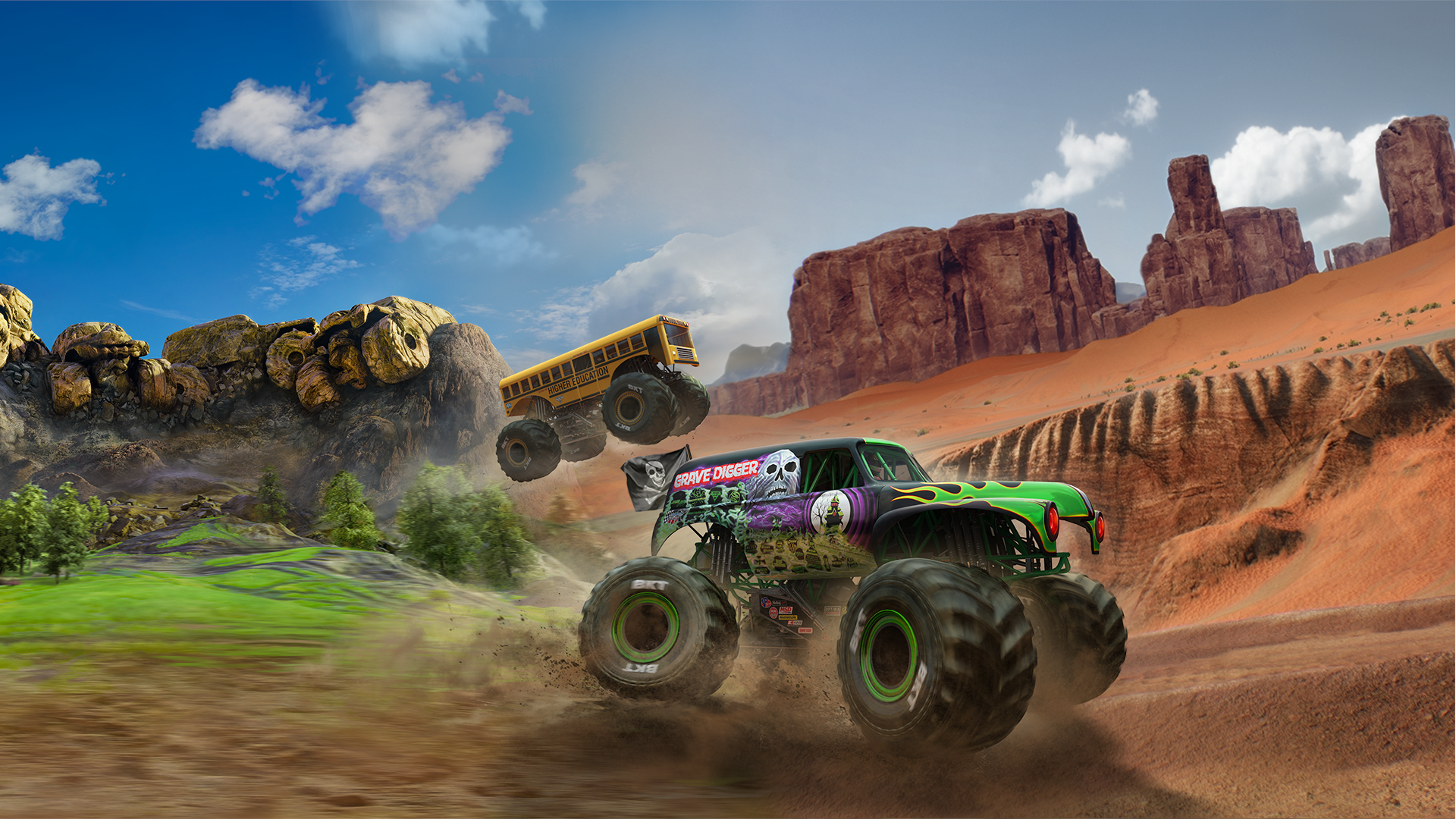 In 2019, I reviewed Monster Jam Steel Titans and felt it was middle of the road. I’m here now with the sequel, Steel Titans 2, and though I think: it’s an upgrade, and there are things the game does that make my time with it less than enjoyable. The initial presentation of colorful open worlds feels deceitful when you find out there mostly isn’t much to do within them. Overall, you find out quickly how much of a slog things are.

The game is broken up into multiple open worlds to explore with your choice of Monster Truck. Once dropped into the first world, I was initially impressed. Stepping on the gas, I could feel the driving physics had improved. They now give you rear-wheel steering control with the right analog stick, and this made for some more precise maneuvering. The trucks genuinely felt alright to drive. Add to the fact that I was in this sunny campground-like area, and I started to get Monster Truck Madness vibes, and I loved Monster Truck Madness. Microsoft, bring back Monster Truck Madness. Until then, Steel Titans 2 is probably as close as we’re ever going to get.

You’re given two separate career paths to wade through, although it’s quite confusing how to navigate them. One career path is a championship held within arena events, while the other is a world career based on the current open-world you’re visiting. To compete in the arena events, you have to pause the game and select from a menu. But to do the world events, you navigate to a specific icon on the map. It’s strange; why not make this more intuitive? Hiding one career behind the pause menu, with no indication that “hey, you should do this next,” left me feeling lost and aimless. I would have preferred that I could access both careers in-world with some form of progression bar or an “up next” indicator on the screen. Something to let me know what I should or could be doing next. 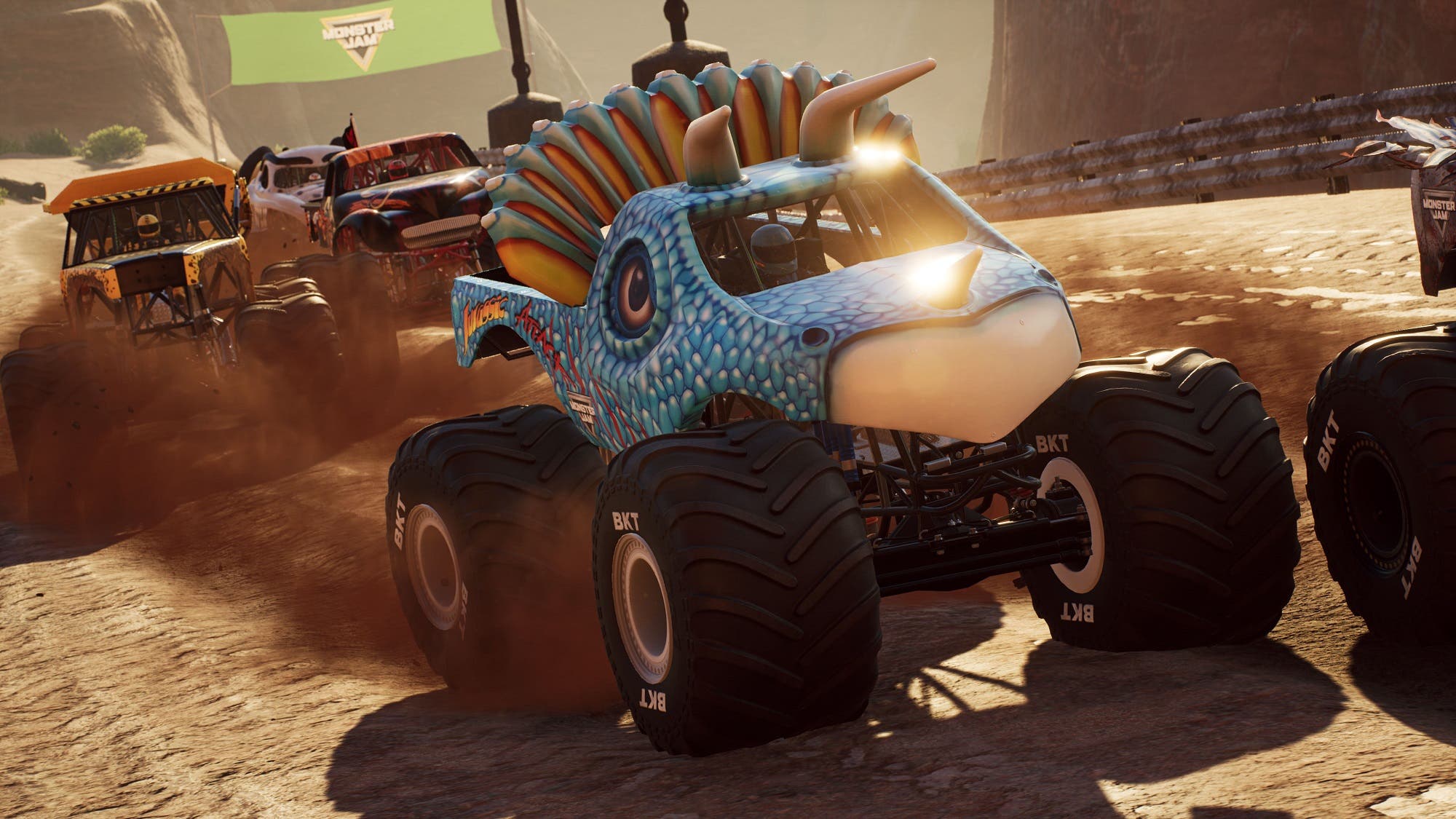 On top of this, both career paths are riddled with issues. The stadium path sounds great on paper and, again, gives you a great first impression. They throw you into a tiered; bracketed racing event set up with a main, semi-final, and final event. It is here I felt the physics of the truck shined through. With that rear steering, I felt as if I was rocking and rolling through this tight indoor course. It is this feeling for what I come to Monster Trucks for, tight jumps, quick turns, white knuckle battles. But you finish this event, and you’re popped into the next one. No break in between, no going back into the open world, do this next event, “champ.” Ok, sure, but then things fall apart because you’re now doing trick events again.

If you read my review of the first title, you know I did not like the freestyle or two-wheel competitions. They both disappointingly return and now include a destruction event. The goal here is, as it sounds, to destroy things. You’re asked to destroy as many objects in succession before time runs out. Boring. Even with the improved physics and rear-wheel steering, these events are still not fun. I found that just messing around in freestyle, not giving a care, still led to high scores. Judge-based events rarely work for me, and that doesn’t change here. Once you complete the championship, you’ll unlock a new truck, which is great, but even if you finish top spot, there’s no pomp and circumstance. It’s back to the open world with you. 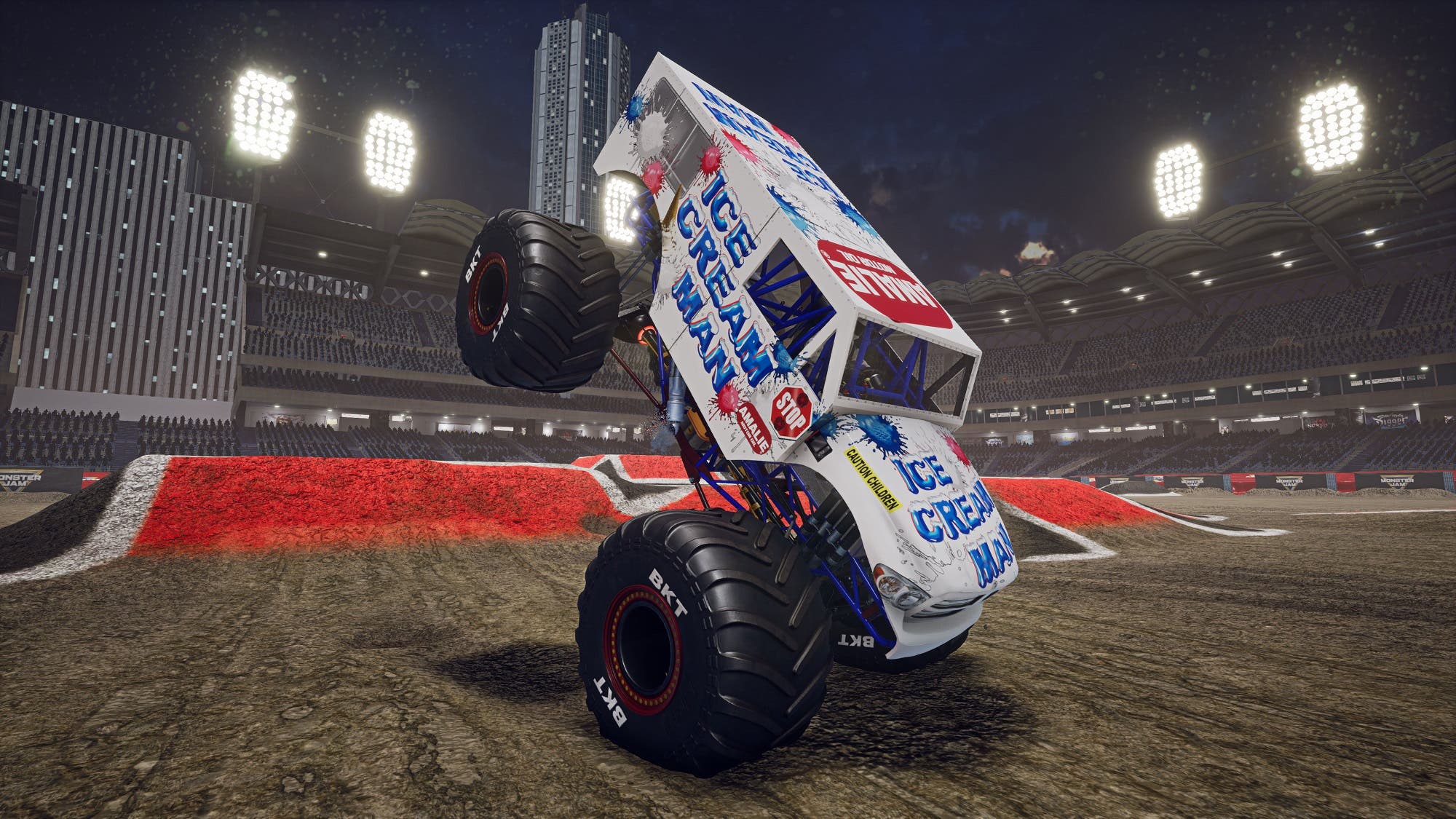 So now that we’re back in the open world, let’s talk about the world career. Unlike most of the game so far, this one played out as advertised, mostly; it didn’t give me a false first impression, at least. There is a lack of variety to the events, though. There’s a standard circuit checkpoint race, there’s a slightly different checkpoint race that isn’t a circuit, and there’s a destruction race that requires you to destroy as many objects as possible as you make your way to the finish line. The two checkpoint races brought out the Monster Truck Madness nostalgia I’ve been ever-so seeking and were quite fun! Granted, the physics can get the best of you out here, especially if you aren’t fluent with using the rear steering. But I had fun nonetheless.

The open worlds are pretty neat and enjoyable to see. They are tailored to a subset of trucks, like a spooky map for your horror-esque trucks, and the aforementioned campground has a giant dog park for the Monster Mutt-like trucks. There are also things to find within the open worlds, but going out and finding them hasn’t been quite so rewarding. When you find a secret area, you can’t use any old truck to “complete” it. You’ll have to enter that area in the truck it was designed to be interacted with. For example, one of the early ones I found was an electrical tower that, when driven up to with Blue Thunder, causes a short lightning storm; that’s it. There’s another on the same map that you drive The Ice Cream Man up to, and ice cream rains from the sky for a bit. 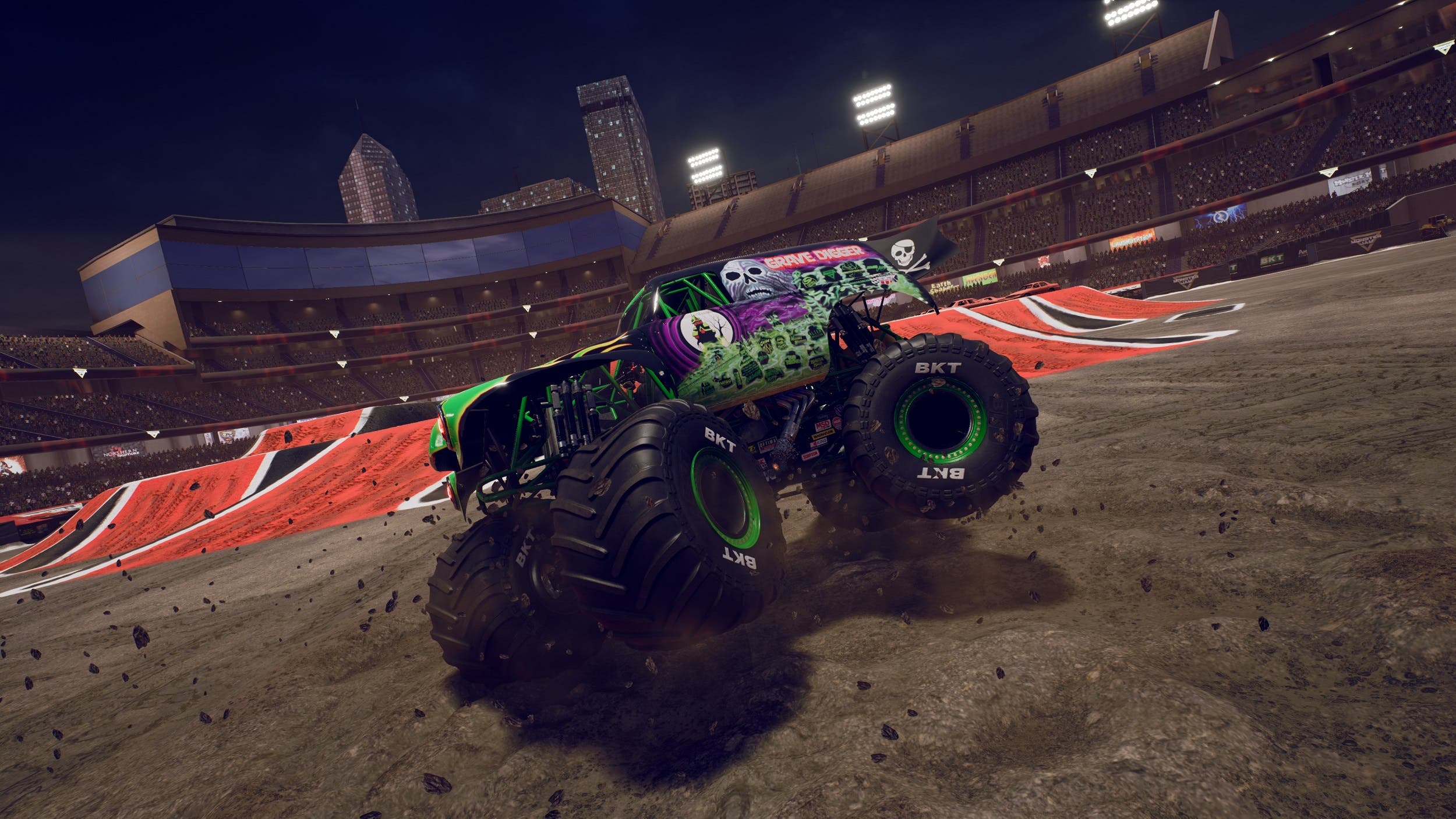 All those I’ve encountered so far have either done this trick or unlocked a ramp to jump. The reward is one of the collectible triangles you can found throughout the map. Speaking of, you collect these triangles to unlock more trucks which puts you on this grind of having to complete the careers to unlock specific trucks. You then use those trucks to unlock access to areas where you can obtain collectibles that will unlock additional trucks to use on other worlds. Oh, and I should say that if you are looking for the big name trucks like Grave Digger, you’ll be playing for a while because they gate them further on in the careers.

You may be asking what customizing can you do, and the answer is little to none. The best you can get is changing your driver from male to female. You can’t do any customizing to trucks either. In the previous game, you were able to assign stats to the trucks for upgrades. In Steel Titans 2, once you complete an event, it automatically upgrades a skill for your truck. These are also done individually, so if you have a high-ranking Blue Thunder, then unlock, say Grave Digger, your Blue Thunder will be easier to win races with because it’s already upgraded. Your upgrades do not carry over to new trucks. 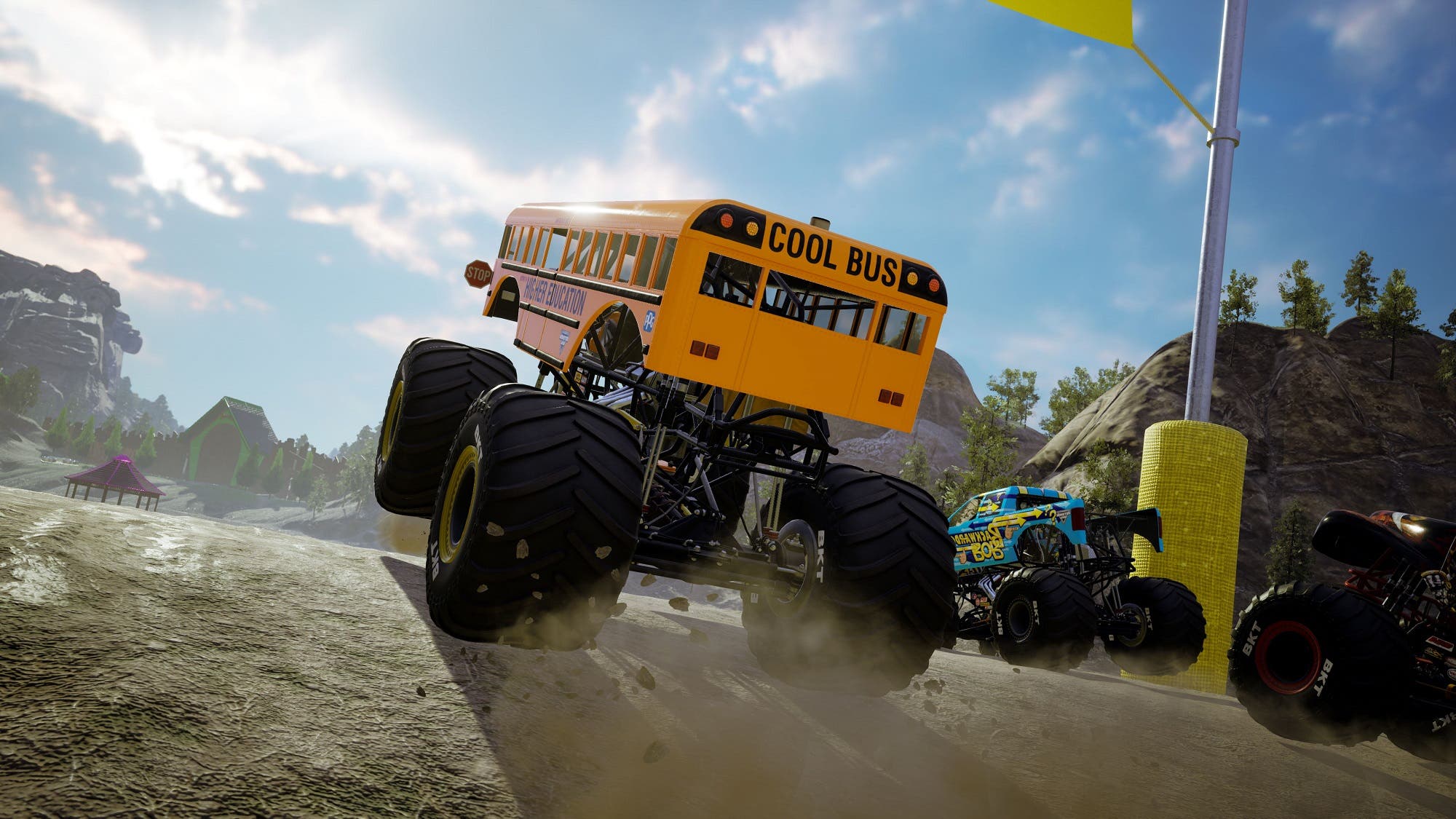 Rainbow Studios has been known for some high-profile off-road titles in the past, Motocross Madness and ATV Off-Road Fury, to name drop a few, so you’d think who else would you leave an off-roading property too. Underneath the issues I had with this game, something is promising here, and it’s something I’d have confidence in Rainbow fleshing out. As I mentioned before, I enjoy the physics; the trucks feel good to drive. The worlds are cool to look at, but there’s not much of a reward for exploring. The career has good bits but is ultimately bland and is a giant slog, leaving a poor aftertaste. Maybe it’s the licensed nature of the beast here, but I’m confident Rainbow Studios can knock it out of the park. They just didn’t do it this time.

Maybe I’m looking for more Monster Truck Madness vs. Monster Jam Action. Give me the crazy-themed open worlds with some fun events and make the championships focus on arena races, drop the freestyle stuff altogether. That would be where I’d start.