JoyMasher takes great care in creating new experiences out of retro game design, and does so wonderfully. Vengeful Guardian: Moonrider is the next 16-bit mash-up from this small studio, and delivers big. This is a challenging game full of memorable bosses, hazardous levels, and a customizable character that matches your play style. JoyMasher cuts to the core of what makes these games so great, and Vengeful Guardian: Moonrider is one to remember. 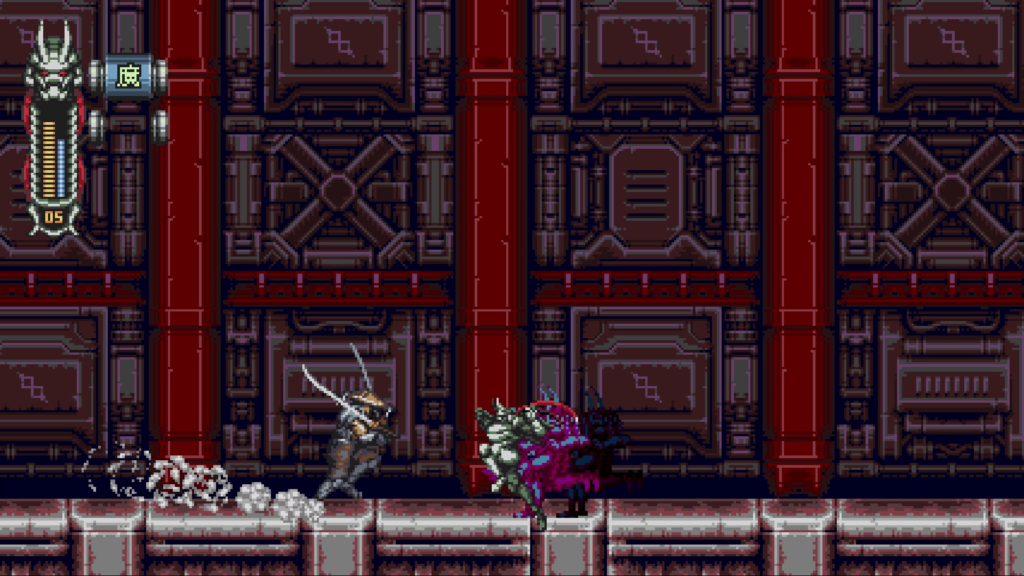 After a short introductory cutscene displaying the oppressive authority that exists, the game begins what is one of the most satisfying tales of revenge. The first mission is locked only to the Bio-Weapon Lab, where we see Moonrider absolutely cleaving his former compatriots in twain before being given control. It’s here he establishes that he rejects this totalitarianism full-stop. Now that you’re in place, you proceed through the level, fighting fodder and tough enemies alike. At the end of it all is a boss battle. I was able to complete this on my first try. This is giving me a false sense of power like Blazing Chrome did. After defeating the boss, you’re given that enemy’s power. It’s here that you realize this game is echoing Mega Man this time around, and it’s so fantastic. From here you’re free to go to any of the remaining stages in any order. There’s likely a specific order you should go in, but I didn’t run into any roadblocks as a result. The last level is locked away with the pre-requisite that you finish all other levels, which makes all the sense.

There are eight stages in total, and there’s great moments throughout. On Desalination Facility, you learn that Moonrider doesn’t need an apparatus to breathe or even bother with swimming. He just runs and jumps with some light friction, activating underwater switches to raise and lower the water levels based on navigational needs. Then on another level you’ve got a psychotic flame-powered robot chasing you throughout a forest while snipers take shots at you. And on Iwondonilo City, you get an awesome vertical vehicle combat level using a motorcycle that feels more like a reward than anything else. It’s this inventiveness and creativity that powers these stage designs to work so well. 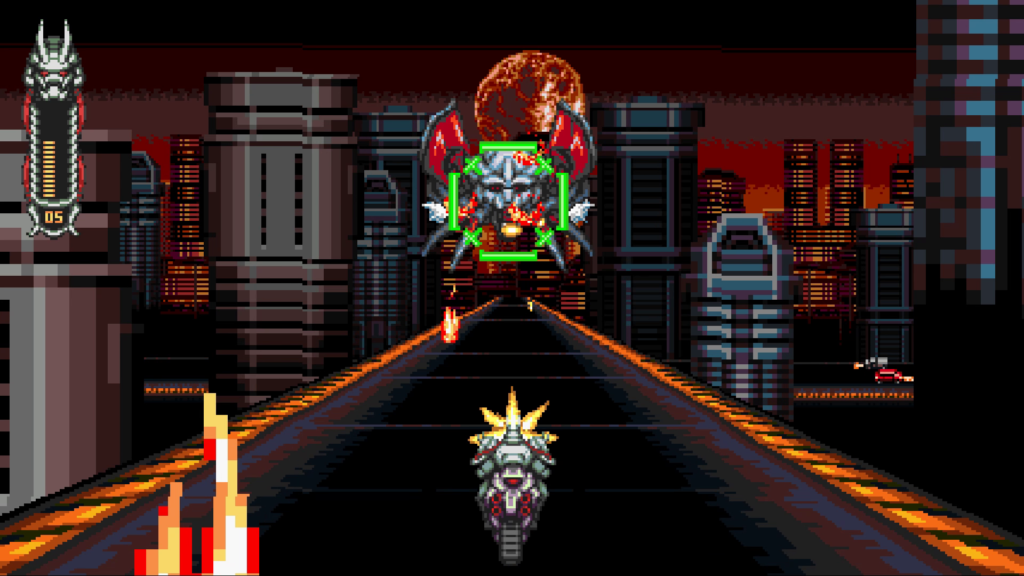 As you traverse levels, you can choose to engage in combat or just ignore it completely. Though if you do, you’ve got basic attack that can chain into combos. If you get a running start, you can initiate a charged attack that will kill most enemies in a single hit. There’s also a special attack that consumes energy, and can be one of seven weapons, collected from the corpses of your enemies that you can use on other enemies and bosses, just like you would in Mega Man. They are all based on elements, and have certain effectiveness against certain bosses. If you take damage, there are containers throughout levels to replenish your health and even energy you’ve expended. There are gentle transitions between stages (e.g. 2-1 and 2-2) where your health will be topped off. Traversal plays a big part in the game, from running and jumping to hanging and wall-jumping that has some slight stickiness to it. All of the controls feel great, and any mistakes made feel like they are of your own making.

Amid the platforming and combat, levels hold secrets to be discovered. Along the way you’ll find power chips that are essentially modifiers that can be enabled onto Moonrider. An early chip lets me take less damage, but I the highest stage rating I can get is a ‘B’. That’s certainly one trade off I can deal with. Other ones can be aesthetic, giving Moonrider a different color palette. One of my favorites is where killing enemies restore some of your health points. There’s even one that’ll help you find secret areas, giving incentive to revisit and explore. The caveat to all of this, is that you can only equip two at a time, which leads to some tough decisions that have to be made. 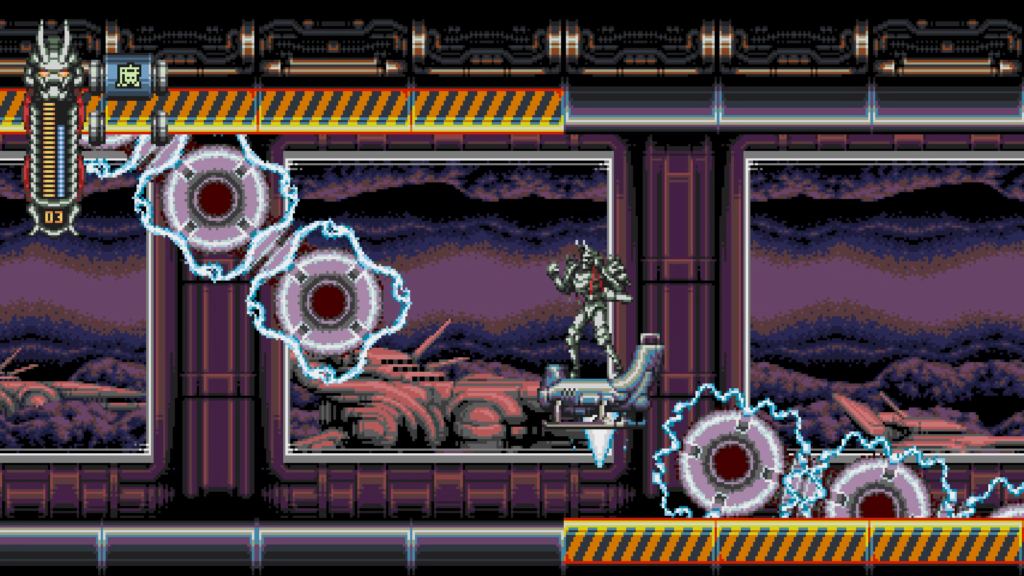 Interestingly, there’s no difficulty selection in this game. The game is tough but fair, and balanced as all things should be. Challenge awaits you though, as you learn the characters, try different levels to see if they can be beaten. There’s even a generous continue system in place, allowing you to play from the last checkpoint, provided you have enough lives. If you lose all your lives, you are sent back to the stage selection screen to start it over. The game does save your progress as you beat levels, so only the level progression is lost.

The game takes around two hours to see the ending, and this is right for the type of game it is. My time playing is around three or four hours when you include all the other failed attempts at beating a certain boss. This is one of those games where the time spent in the game it will vary on each individual. 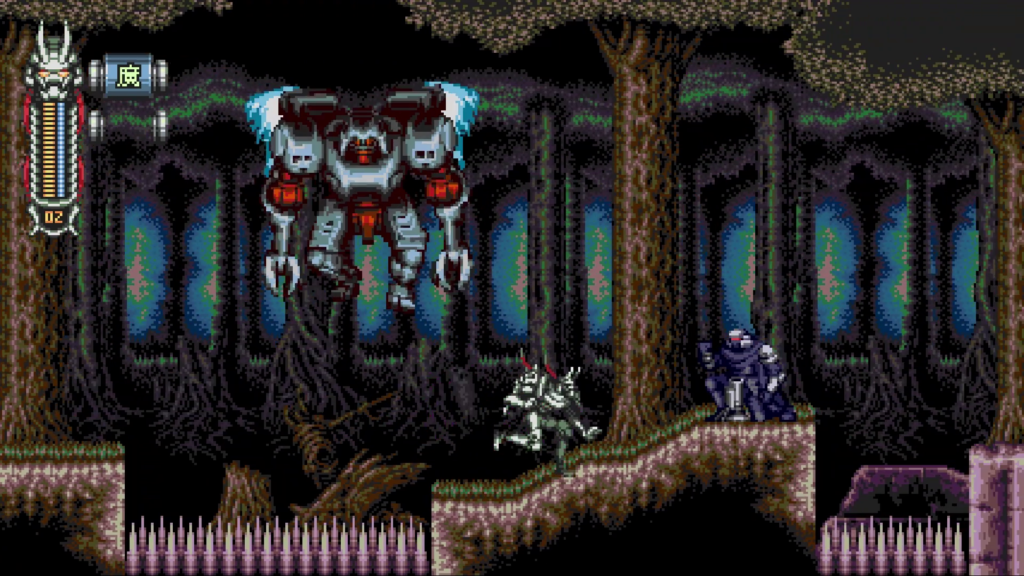 While there isn’t a lot in the way of graphics options, one in particular is a great inclusion. If I’m going to trust anyone with a CRT filter, it’s JoyMasher. Here the colors pop with this on, and while it does make the image of the game less clear, it does evoke the era in all the ways you’d want. The 16-bit graphics are just stunning, the animations are smooth, and the everything just comes together with all the various locales you’ll visit.

Vengeful Guardian: Moonrider abbreviates to “VGM”, and it also has great video game music to complete the era. This is one of those soundtracks you listen to outside of the game just because it’s so good. 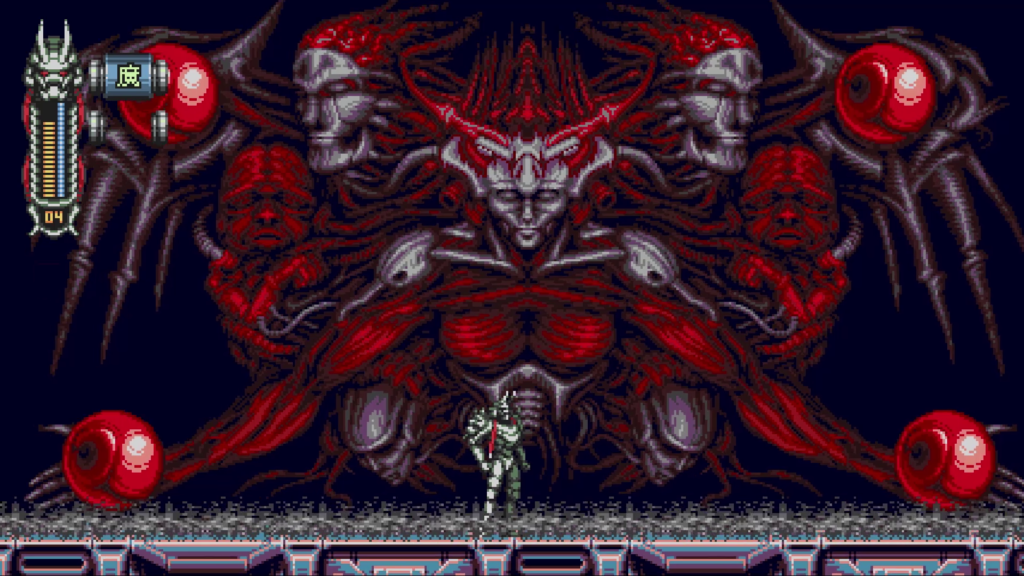 Vengeful Guardian: Moonrider is a short, replayable, and satisfying 16-bit side-scrolling platformer. JoyMasher and The Arcade Crew nail it yet again, this time with a Mega Man meets space Shinobi that really excels at feeling like a game that released 30 years ago and was lost to time. From the look, the sound, to the controls, Vengeful Guardian: Moonrider is a slice of heaven.