To mark the news, Codemasters has released a new gameplay trailer recreating key moments from the blistering opening to the 2012 FIA FORMULA ONE WORLD CHAMPIONSHIP which saw an unprecedented seven winners in the first seven races.

In the demo, players will sample two of the game’s new features, Young Driver Test and Season Challenge. In the Young Driver Test, which takes inspiration from the real-life event held at Abu Dhabi, players will learn how to handle and get the most out of motorsport’s most exciting and responsive racing cars with a series of tests and videos.

Gamers will then sample Season Challenge, a new game mode where players will compete across just ten races to become the number one driver on the grid. In the demo, gamers will pick a rival and aim to beat them in a five lap race at Monza, the iconic 3.6 mile track where cars can reach a top speed of 218m.p.h.

F1 2012 is set to deliver the most accessible and immersive FORMULA ONE™ game for fans of all abilities. Players will feel the unparalleled thrill of becoming a FORMULA ONE driver with a host of new features, wide-ranging technical and gameplay advancements and extensive competitive and co-operative multiplayer components. F1 2012 will feature all of the official teams, drivers and circuits from the 2012 FIA FORMULA ONE WORLD CHAMPIONSHIP, including the debut of the 2012 FORMULA 1 UNITED STATES GRAND PRIX at Austin, Texas and the return of Germany’s famous Hockenheim circuit to the calendar. 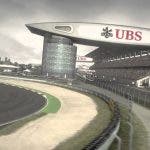 F1 2012 is in development at Codemasters Birmingham for Xbox 360, PLAYSTATION 3 and Windows PC and is available for pre-order ahead of its September worldwide release. To get all the news straight from the studio, race over to www.facebook.com/formula1game or follow the team on twitter at www.twitter.com/formula1game.