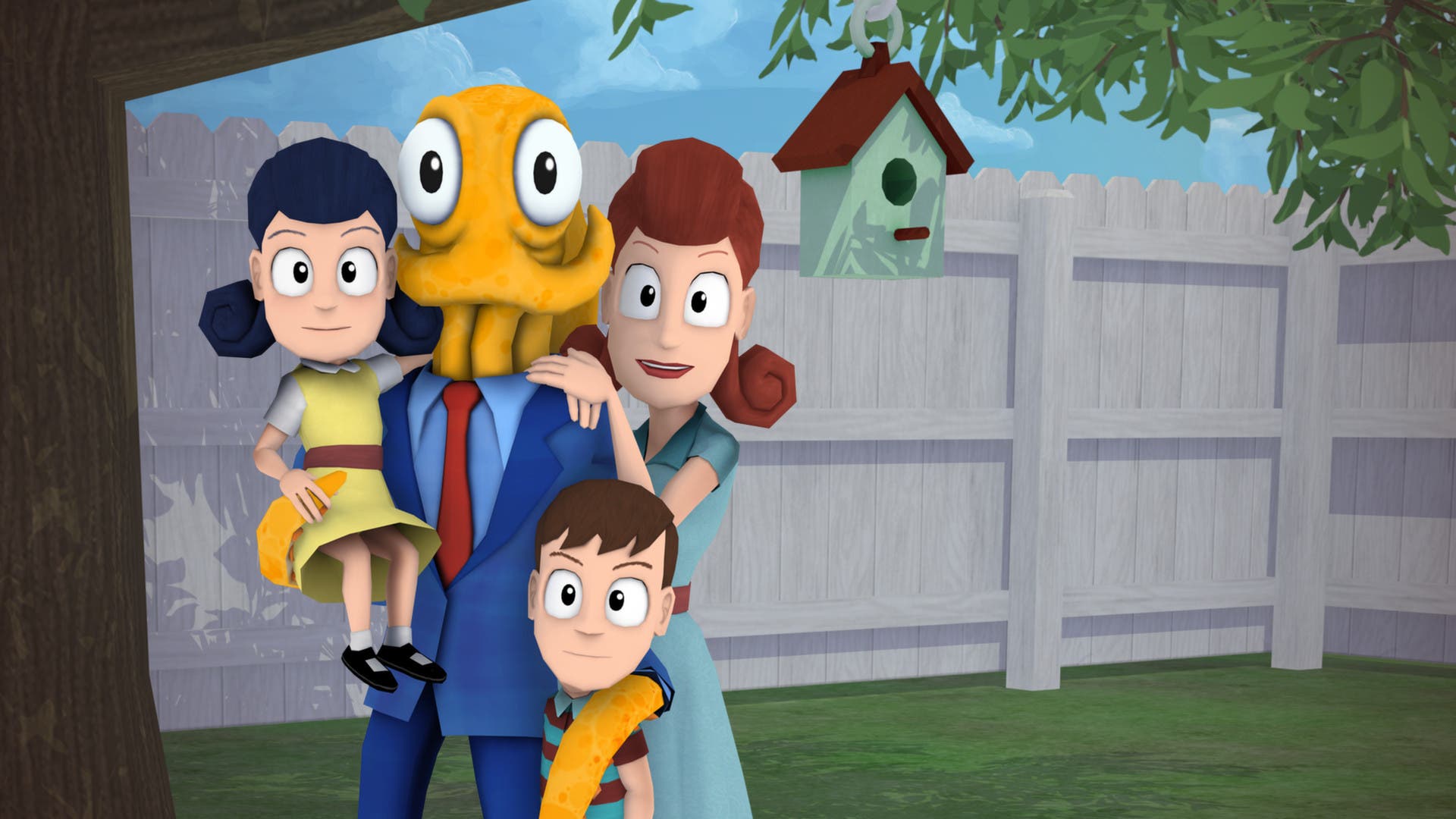 University student project, Octodad, back in 2010. It garnered a lot of attention and was a freeware success. In 2011, a Kickstarter for Octodad 2 was formed to help fund a proper sequel, which was successful on its own terms (and not like Double Fine numbers). And here we are, Octodad: Dadliest Catch is the renamed, completed project of Octodad 2. Is it truly a catch, or should you throw it back? Everything starts off timidly enough, at least for what a human male in a marriage would find to be incredibly easy and mundane: Waking up, stumbling out of bed, turning off the alarm, getting greeted by his wife and kids, and starting the day completing a “Honey Do” list. In all actuality, your objectives are a list of tasks that gets checked off as you complete each one. You play Octodad, an octopus who is under the guise of being a family man, and must prevent anyone from discovering who you really are. A meter fills as you do things that are suspicious. Fill it completely, and you are discovered and sent back to the last checkpoint.

Moving Octodad is an interesting affair, as you’ll control the left leg, right leg, and his right arm. You can do so with a keyboard & mouse, and a gamepad like the Xbox 360 Controller or even the recent DualShock 4, with no special trickery for it to work natively. It makes sense given that the game is due to release on PlayStation 4. The gamepad feels the most natural and controlled, whereas the keyboard & mouse felt too loose and imprecise. But that said, Octodad’s movements can feel wild and varied to the point where you barely feel in control of your actions. That is where some of the hilarity comes from, aside from the dialogue, seeing Octodad move in mysterious ways. It feels like a bit of a tease with the early levels of Octodad being so warm, soft, and welcoming, giving an expectation for what the game will be like. Upon arriving at the aquarium, you are tasked with ever-increasing dexterity tests that isn’t the fault of the player or even the design, but more simply the physics not responding well, acting wonky and becoming problematic.

Despite being an octopus, Octodad has no offense, such as using black ink when threatened, as what would happen in real life. Octodad is very passive and is quite often, required to use his defenses to hide, or run from the game’s antagonist. Stealth isn’t the game’s forte, but it matches up with an octopus’ marine biological nature and creates some fun tension as you have to do this while behind the wheel of an almost out-of-control character. The story only spans three to four hours of play, depending on how difficult it is for you to traverse. So the replayability comes in the form of a Free Play mode to where you can revisit any previously completed level for a better time, and finding collectible ties that can be worn.

There’s also a Co-Op mode in which up to four players can control different parts of the body. It’s not really a viable way to play, but is a riot with friends and family. Or it may actually turn into a riot as fighting ensues over how nothing is being accomplished.

The integration of the Steam Workshop allows you to download new levels that test you on an American Gladiators-style obstacle course, Zero G environments of current levels, and mini-games. Over a short time, there will be a ton of content that will usurp the upcoming PlayStation 4 release of the game. Octodad: Dadliest Catch gets off to a hilarious start, but after a couple of hours, collapses under the weight of its own physics. The increase in demand of player skill is enough to be off-putting for many, as the game’s physics and mild bugs get in the way. It’s at that point, the game stops being funny. While it doesn’t quite reach frustration, it becomes enough to where you put the controller down for a bit. But then you’ll be back, seeing what kind of silly situation Octodad gets himself into next.

A Steam code for the game was provided by the developer, Young Horses for review purposes