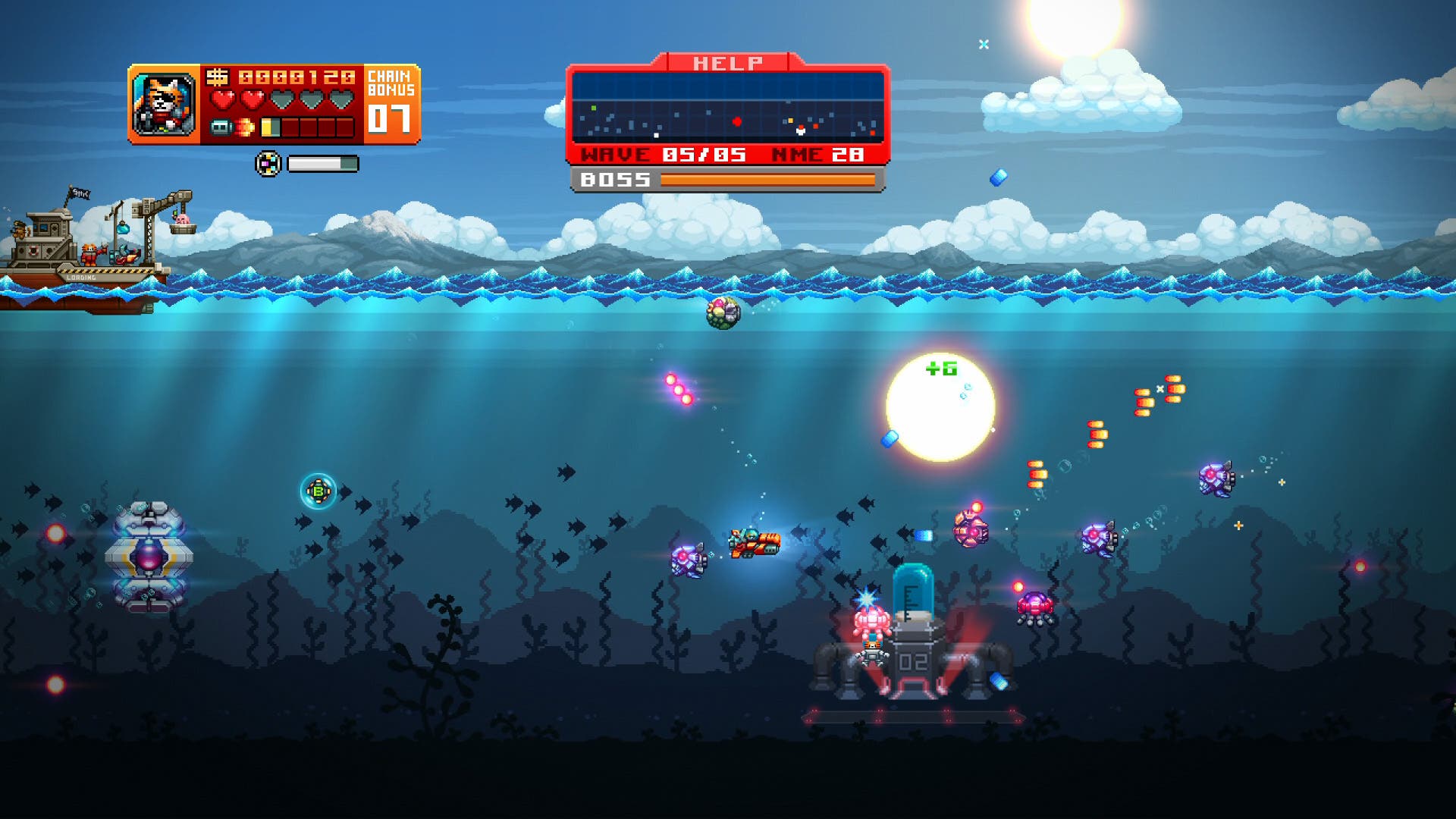 Aqua Kitty - Milk Mine Defender DX is not much different than the Steam release, sans the "DX" in the title. But it does include features from that version and more for the PlayStation systems. This Defender clone is in a league all its own, 30,000 leagues even.

Aqua Kitty – Milk Mine Defender DX is not much different than the Steam release, sans the “DX” in the title. But it does include features from that version and more for the PlayStation systems, where the PS4 version benefits the most, but the PSVita is great as well. This Defender clone is in a league all its own, 30,000 leagues even. 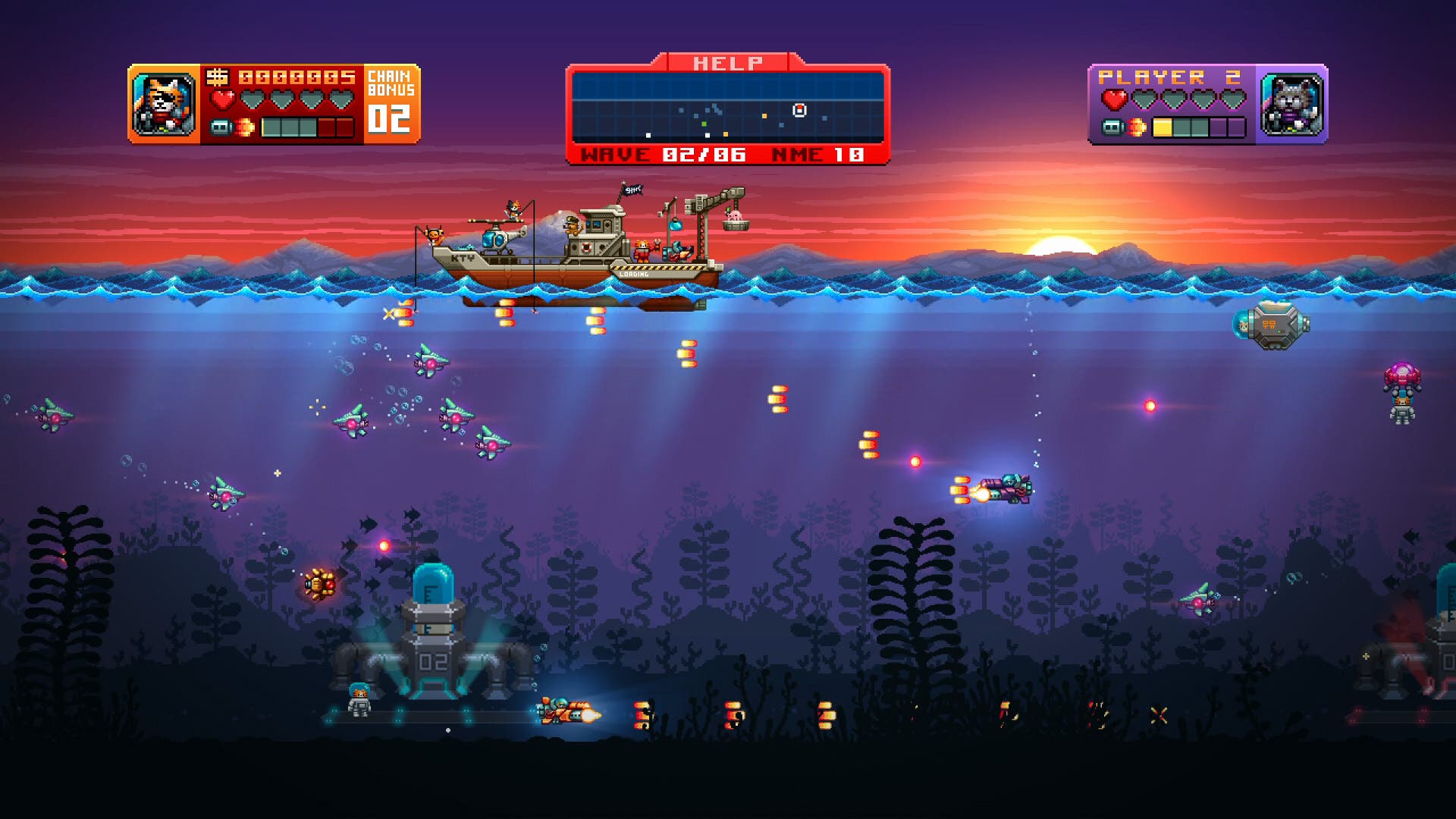 The story to Aqua Kitty is light, but very humorous. The world’s milk supply has gotten critically low. So cats have banded together, put on diving suits, and built incredible milk mining machines that dig into the planet to retrieve the precious milk. But not all is peaceful in the ocean, mechanical sea creatures are vying to stop you.

In that, the gameplay is very much the classic arcade game, Defender. But with its own twists and a completely unique art style. You’ll have at least one mining station to start with, and the radar is really helpful. It’ll mark enemies, but the ones that can steal your kittens, are in red. 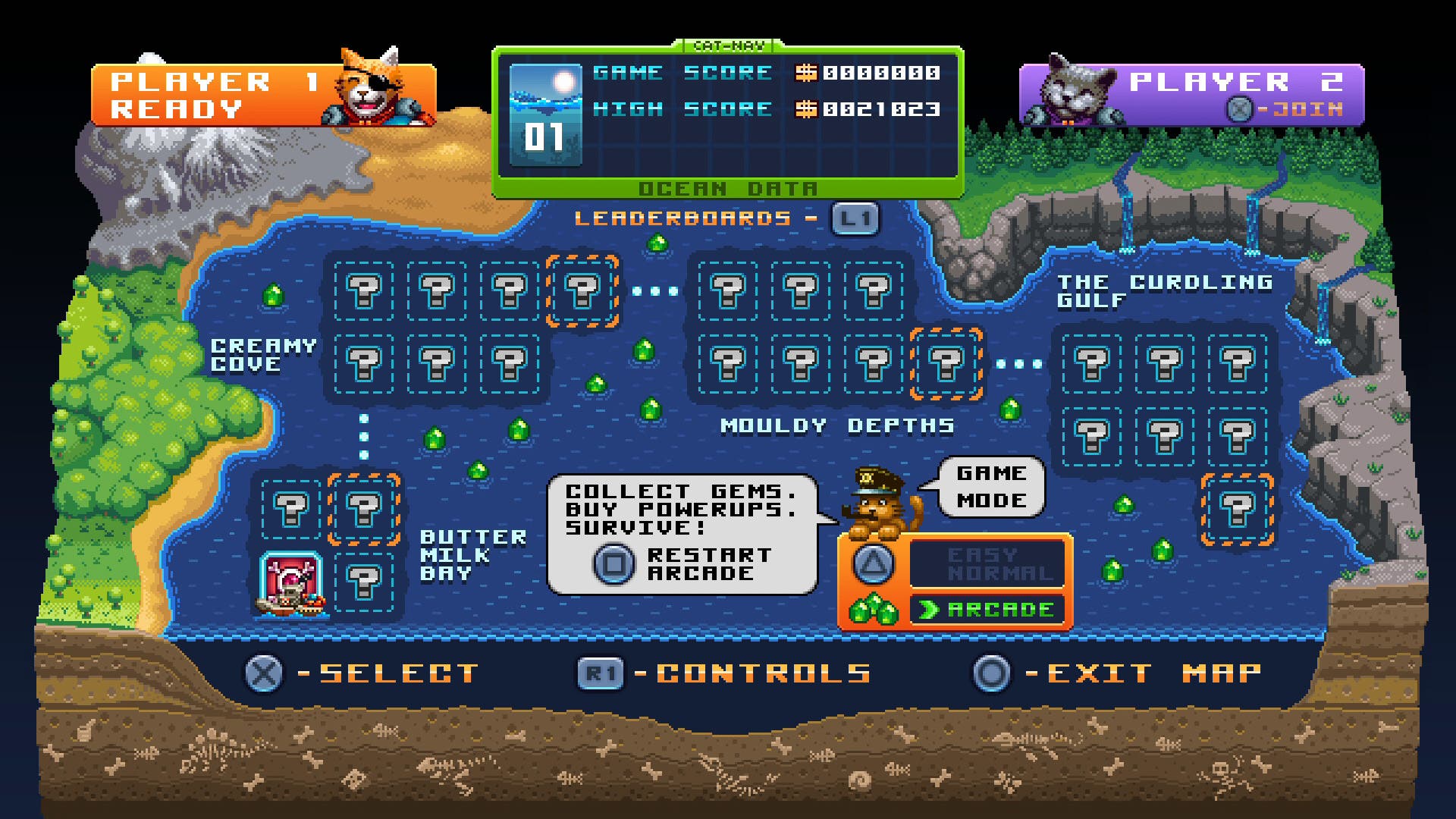 Difficulty is manageable. Easy mode is new to the PS4 and PSVita in this DX update. It remains challenging, but the enemies are just easier to take down. You may breeze through the early levels, but the third and fourth sections really step up and require you to be skillful. Normal is really the best way to play the game, but ultimately is more difficult and more challenging. But also feels more rewarding.

Arcade mode, mixes the Defender formula, with an upgrade system of Gradius. It’s a different experience that plays similarly, but feels unique. If that’s not your cup of coffee, there’s also Infinite Espresso mode. This mode doesn’t task you with saving kittens, but throws tons of enemies at you in an endless mode to reach as far as you can to get the highest score. 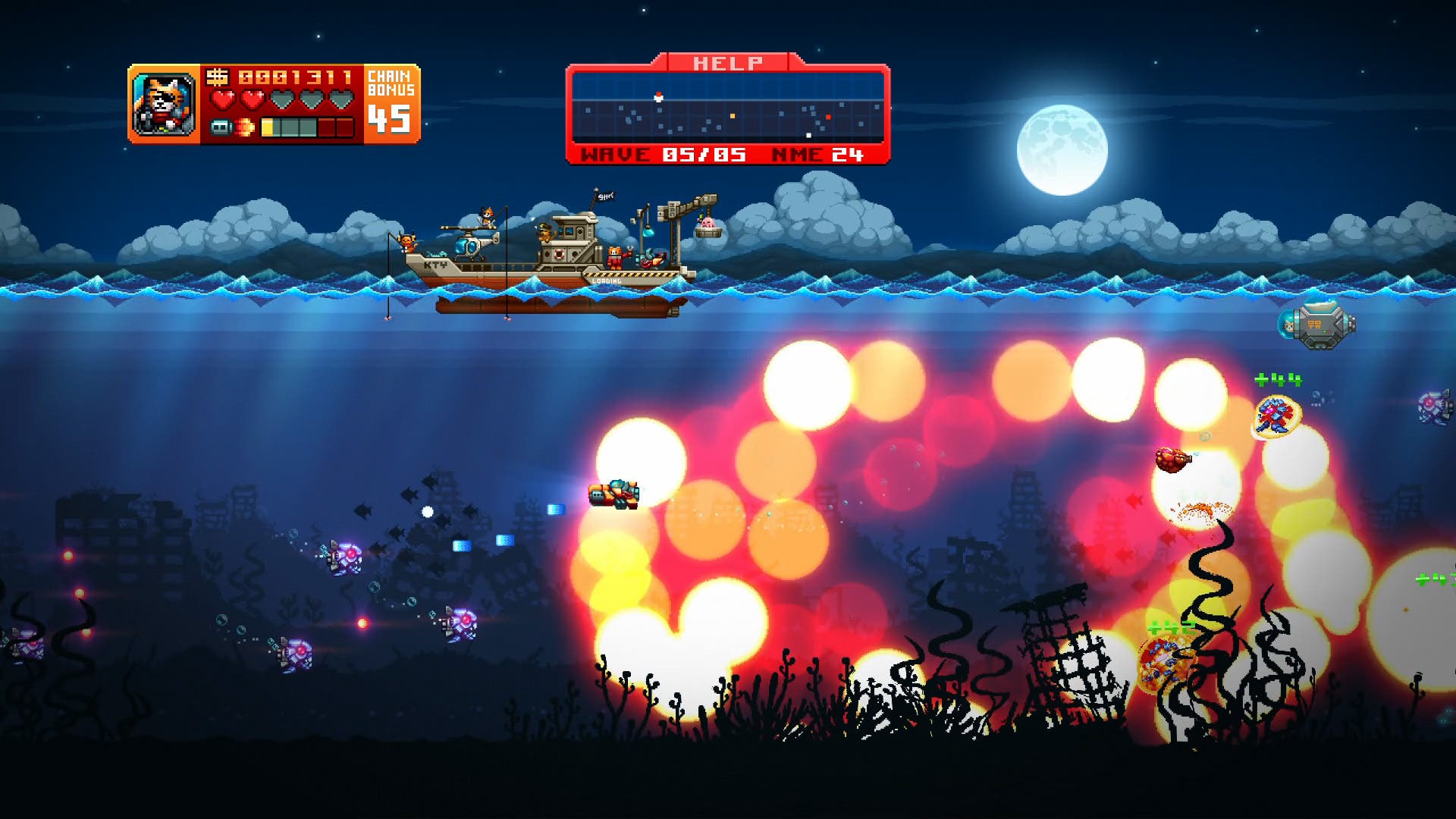 The DX version now has new large enemy bosses, which for me I’ve had to change my tactics for defeating, to that of the Steam version. I’ve noticed some extra levels, too. Which forcing me to change the way I played the game I’ve already played, really freshens everything up.

On the PS4 specifically, there is 2-player coop which works just as you’d expect and you’re able to differentiate the players on-screen from the enemies. The controller also makes use of the lightbar, and the sound effects through the speaker are wonderful. When cats are abducted and rescued, a sound effect is played. This got lost in the regular sound mix on PC for me, so it being separate made it easier for me to keep track and almost never lose a kitten to its sea abductors. The game also plays in full 1080p, at 60fps. The developer has even stated the game is actually rendered at 4k on the GPU. So performance is top-notch. 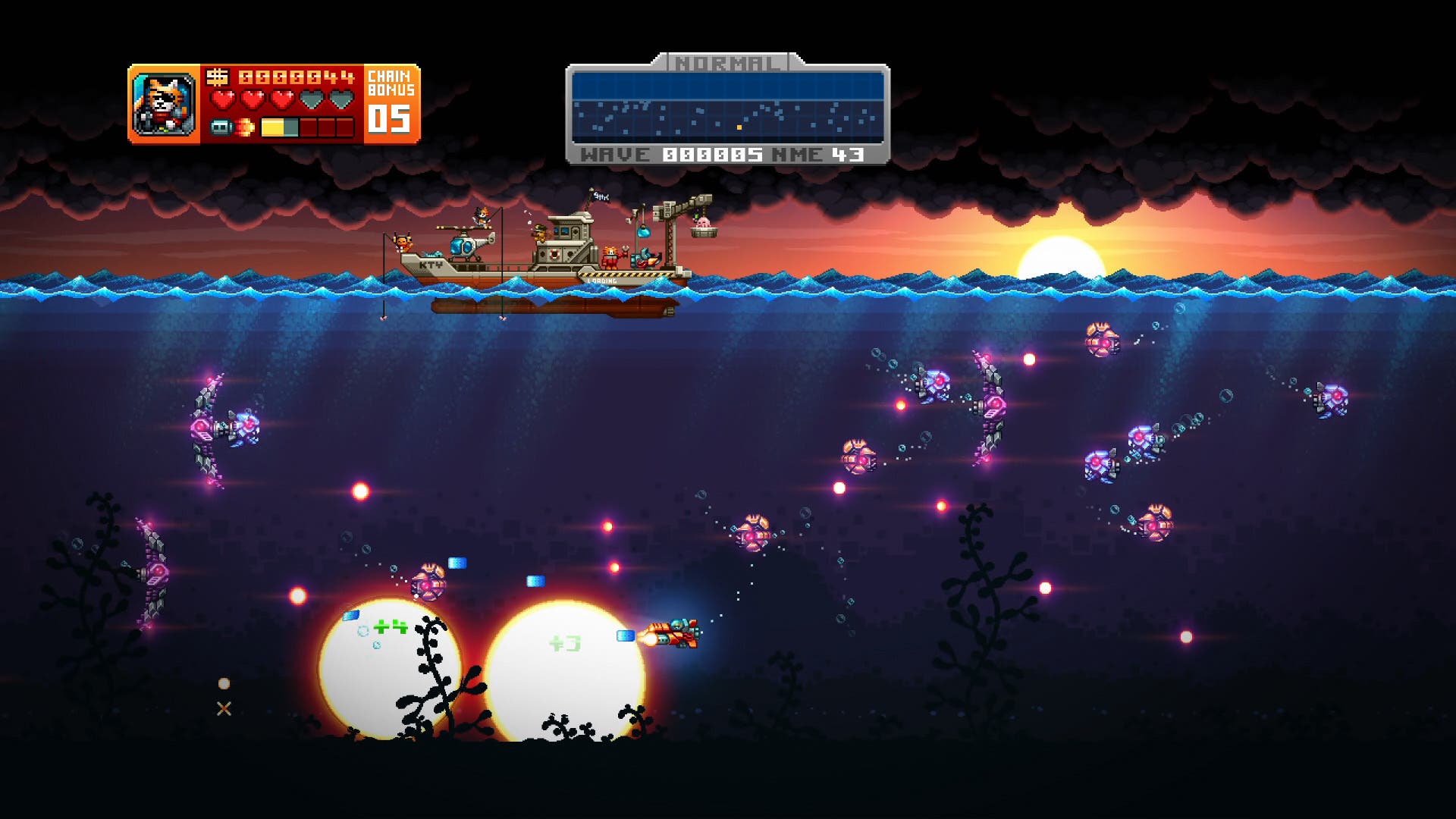 Aqua Kitty – Milk Mine Defender DX is cheap, entertaining, and endlessly replayable – not only to get better places on the leaderboards, but for the incredibly fun Infinite Espresso mode. Whether you have a few minutes, or a whole afternoon, is worth playing in every capacity. But Tikipod Ltd understands the retro gameplay, and does it beautifully with colorful, explosive display.