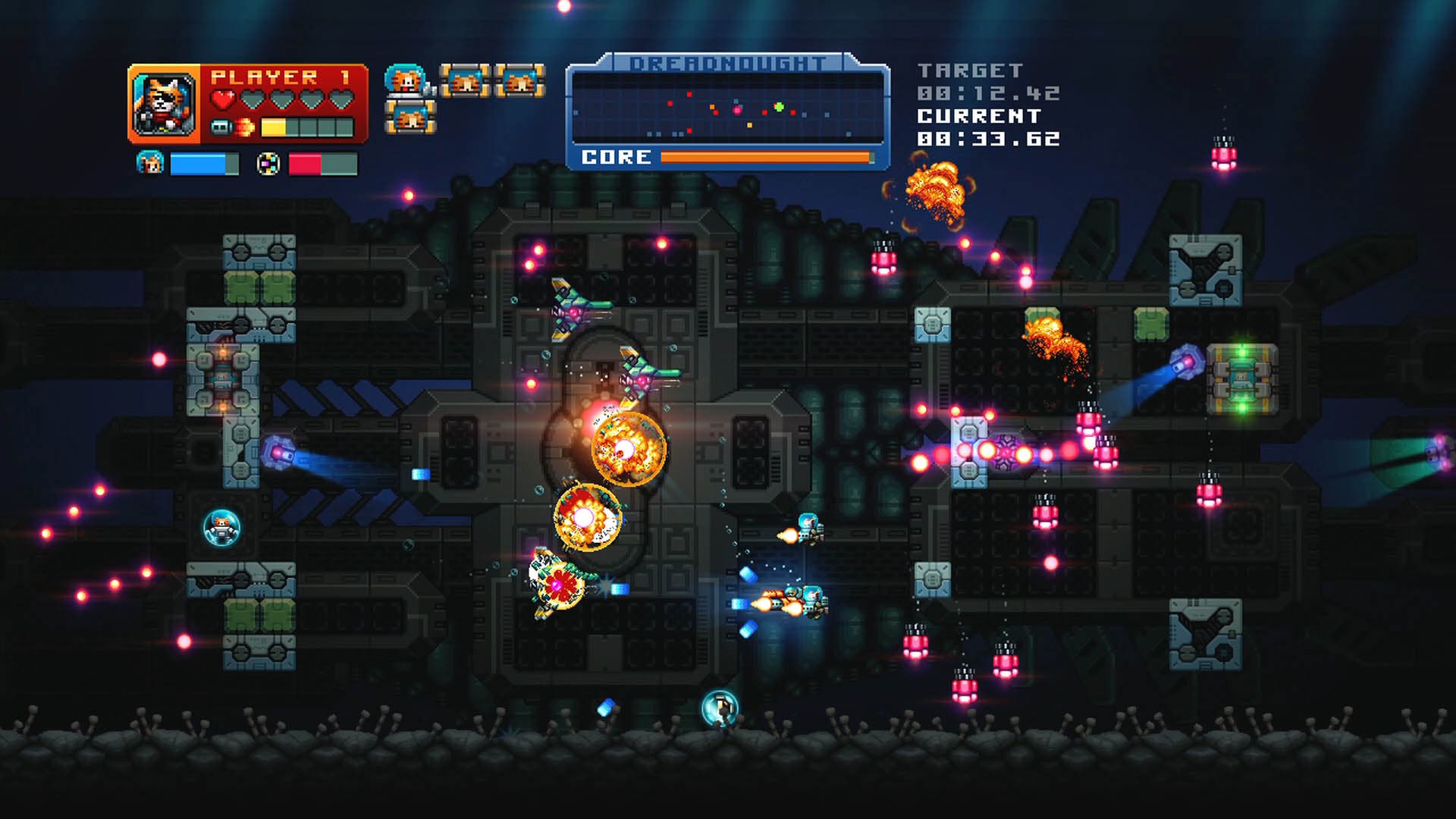 AQUA KITTY UDX: Xbox One Ultra Edition has challenging but simple gameplay, no shortage of modes or ways to play, and is incredibly entertaining no matter how much time you invest in it. This reviews makes for my third of what essentially is the same game, but the Xbox One version is easily the best version of the game to-date. The duo over at Tikipod Ltd. have crafted yet another fine version of the game with a new mode: Dreadnought, that freshens it up enough to warrant another purchase. For new players, the reasons have always been there, but now there are more reasons to purchase the best Aqua Kitty.

The premise of Aqua Kitty is that the world’s milk is in short supply, and they must mine it from the ocean depths. In this pursuit, these cats are constantly being taken from their mining platforms to prevent this from happening. This is a light-hearted take, and not to be taken too seriously. Now, moving onto the gameplay of Aqua Kitty, it is most reminiscent of Defender accompanied by high-resolution 2D pixel drawn artwork. It evokes that 16-bit gaming era, but with more detail in visuals and audio. The whole package is arcadey and light, allowing you to have fun in long or short bursts.

New to the Xbox One version of the game, is the new Dreadnought mode I previously touched on. In playing this, I can’t imagine playing the game without it. And now, I’ve also played this game numerous times through, on numerous platforms. But this new take on the game requires you to play differently. You must attack an underwater dreadnought, located in the Meowiana Trench. And there hull must be dismantled by destroying elements of it so that you have access to the core and final turret. Once it is destroyed, you are victorious. What makes this mode especially challenging is the target times for these levels, calling for efficiency over quality time. There’s 13 of these levels, and all of them feel unique and challenging on their own. The developer calls this a blend of Uridium and Defender.

While falling on the smaller end of the spectrum for updates in this Xbox One release is the fact that the music has been remastered, to include new music and sound effects for the mode. I noticed that the HUD art is more defined and prominent than before, allowing me to separate it from the game itself. The game has truly evolved from its beginnings as just Aqua Kitty – Milk Mine Defender (PC) to Aqua Kitty – Milk Mine Defender DX (PS4) and now AQUA KITTY UDX as the Ultra DX finite, possibly final version.

The core game of Aqua Kitty still is present, and is no way anything you should miss. Classic Mode is the way to play the game for the first time, and there are Normal and Easy difficulties associated with it. I recommend playing through on Easy until you get the hang of it, and each difficulty has its own progression. Arcade Mode mixes things up and lets you upgrade your arsenal as you progress through the levels, but is certainly more challenging, and is great fuse of Defender and Gradius. There is a way to play the game in co-op, but it too does not rest on its laurels. You can play on easy or normal, but if one of you dies, you both die. One restriction I wish could have been addressed, was that if one of you strays to the edge, the screen locks you both on it and doesn’t do something to allow you two to move freely – though I think that sticks to that hardcore arcade methodology and nostalgia. The reliance of enjoying a game like Defender is paramount for your enjoyment of AQUA KITTY UDX: Xbox One Ultra Edition, and if you don’t it would be hard to convince you otherwise. There’s certainly a lot more things going on than it just being a clone. It is something all its own and works hard to distinguish itself. Now, I preferred the sound mix of the PlayStation 4 version of the game, specific to the DualShock 4 where it output certain sound effects that sometimes got lost in the original mix. So in terms of audio, Aqua Kitty – Milk Mine Defender DX is preferred, but it doesn’t have Dreadnought Mode. So overall, if you have a choice between the PC, PS4, and Xbox One versions of the game, AQUA KITTY UDX: Xbox One Ultra Edition version is most definitely the one to own. It has all the updates, all the modes, all the remastering, and all of the cats.