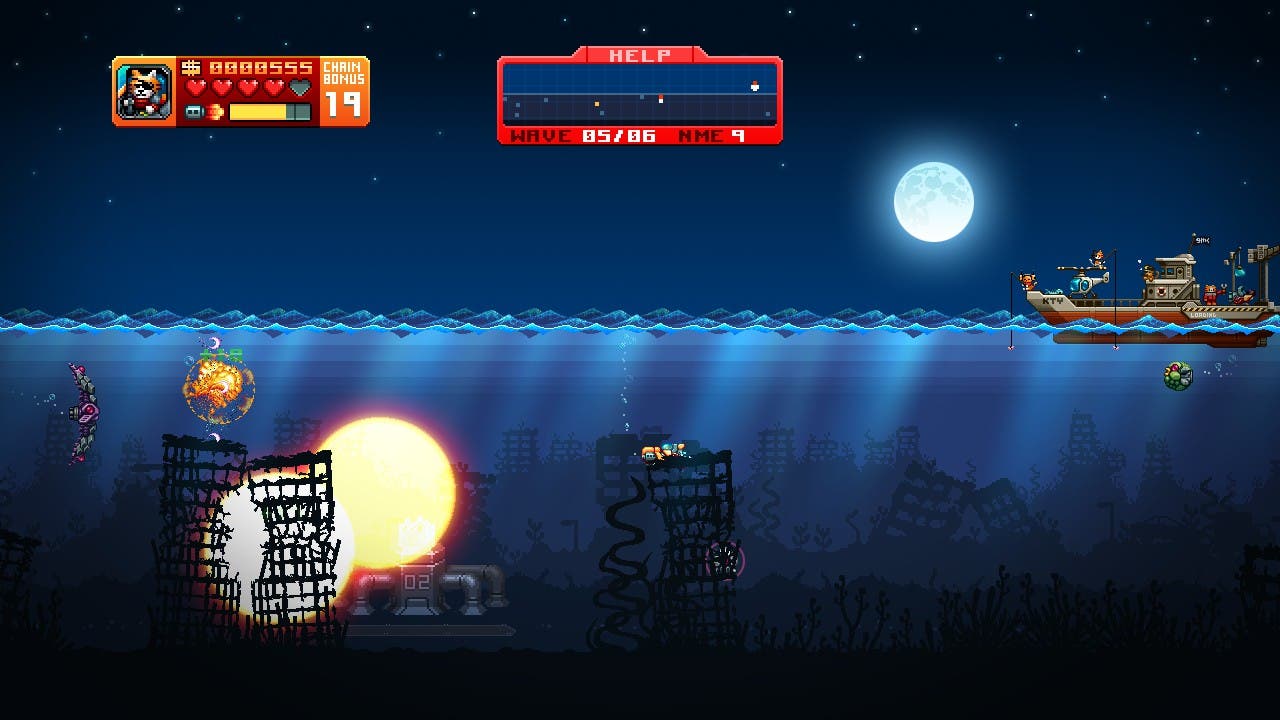 You know that it’s gotten bad when cats have to mine for milk in the depths of the ocean, despite their natural aversion to water. In the world of Aqua Kitty – Milk Mine Defender, things are just this grim. But given this sad circumstance, this is a game that permeates joy all around. With a minimal story told by a static screen, you’re then placed on a world map we’ve seen countless times before. Completing your first mission shows you the option of choosing your mission. Rather than play linearly, you are given a branching path to play whatever you want. I found playing the levels in order kept the difficulty in a slow upward trend. The latitude that is given to the player is most welcome, and can allow you to progress without ever feeling stuck retrying the same level over and over. However, after the first section, you can play Infinite Espresso, which fills the ocean with enemies without needing to save any kittens, it’s not relaxing, but the added stressors are removed to see what high scores can be achieved.

It’s right there in the title, but yes, this is a Defender clone. Aqua Kitty is layered so well that it isn’t derivative, You’ll move and shoot with ease, and can turn your ship left and right for quick manuevers. The world wraps, so leaving the right side has you entering on the left side. And later levels give the game a feel of bullet hell you experience when playing sh’mups. The default setting puts you into Normal, which by the third and fourth area, can be quite difficult and demands a lot from you. The new Easy mode is easier, but doesn’t make you invincible. The challenge on Easy, surfaces to remind you that you aren’t given a free pass and must work for it. There’s also an Arcade mode where you must survive and purchase special power-ups from cash earned.

The game can be played with keyboard or gamepad. Both work incredibly well. Co-Op is great fun as you’d expect, and is local co-op. With timing and precision needed for this game, having it online would be more of a hindrance. The artwork is so stunning that it has caused me a few deaths as I ended up staring at it in awe. It’s so vibrant and crisp. Sprites and the world are finely detailed, all with parallax scrolling for a familiar nostalgic feel. It’s really beautiful to see it all in motion. Each new location just gets prettier and prettier. Running at 60fps, and it never slows down with however many enemies are on-screen at one time.

That, coupled with the sound effects and the upbeat soundtrack by Electric Cafe makes for auditory enjoyment on your ears, especially with a good headset to wrap them in. With catchy music, gorgeous art, and near-infinite replayability with enjoyable and swift combat, Aqua Kitty is absolutely delightful all around. The Steam release makes this the most robust, and feature-rich version to own, and has a price that gives no reason not to own it.

A Steam code for the game was provided by the publisher, Tikipod Ltd. for review purposes