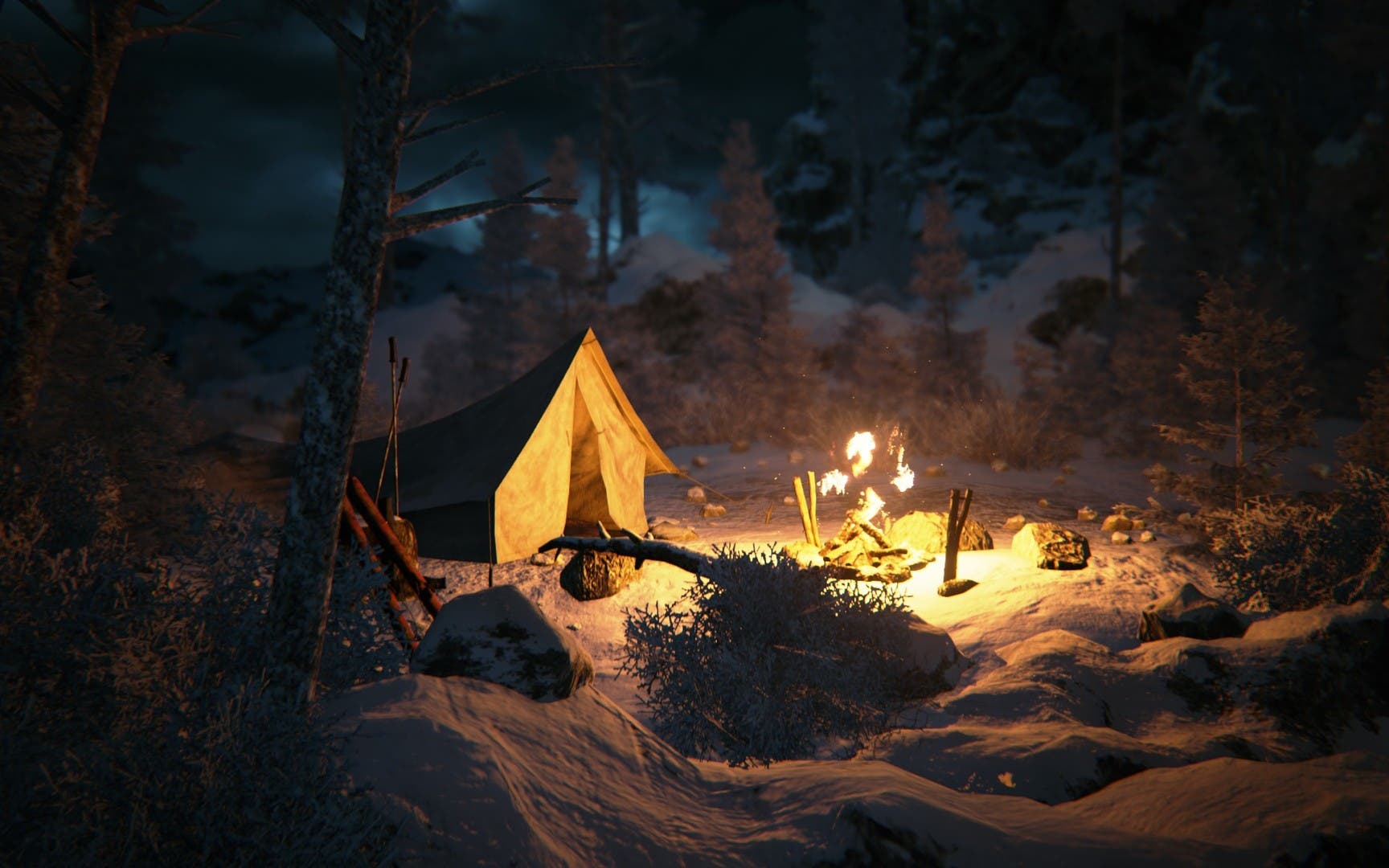 The Dyatlov Pass incident is one of the world’s most unexplained occurrences in our known history. In February of 1959, nine experienced hikers found themselves accidentally off-course on the Kholat Syakhl mountain, and all mysteriously died. Soviet authorities have said that it was caused by an “unknown compelling force”. To this day, there is no actual explanation as to what happened in the Ural Mountains, only speculation and assumptions. It is often said that some things are better off unexplained, and in the case of Kholat, it proves to be true. The narration by British actor Sean Bean gives Kholat some weight, but I was too distracted by the fact that the spoken word was different than the written word on-screen, with the subtitles often having a better word choice. You arrive at the train station where the nine hikers had begun their journey years ago, which is where Act I begins. It is a short introductory sequence that has you wandering aimlessly to follow in their footsteps, with no actual footsteps to follow. Eventually, after several dead ends and invisible walls, you’ll be lead to a tent containing a compass and a map that truly begins your journey into the unknown.

Kholat is played from the first-person perspective, and has a strong focus on discovery and exploration. One of the early moments is something of a supernatural event, and when you return to looking at your map, it has been updated with a marker, and on the list of coordinates, one of them is now scratched off. The map takes some getting used to, as your position is never revealed on the map, and you must use latitude and longitude coordinates to navigate the mountains. The nine coordinates are what I assume to be associated with the nine hikers, but the locations are not their actual positions when they were found after months of searching. It’s a historical inaccuracy that works in the game’s favor, but one I couldn’t help but notice. Running in Unreal Engine 4, Kholat is gorgeous, if not a bit monochromatic early on, with the snow blowing all around you. Later locations, with roaring campfires, recently burned forests, icy waterfalls, and highly detailed caves showcase the game’s engine with excellent lighting. Though, graphics does not a game make.

Kholat‘s story is weak. It’s never completely understood as to the how’s and why’s you are there, and what you hope to achieve. You find bits and pieces of story through notes nailed to posts and trees, or lying on a tree stump somehow unaffected by the harsh winters and devastatingly high winds. It’s again this disbelief that can never be suspended long enough to get immersed into the game. When you discover a diary entry, a voiceover reads it aloud to you. Over the course of the game, it is clear the character writing these is losing their mind, but the voice acting that delivers these words does so as if it were a Shakespearean play, overacting and becoming obnoxious in telling the story. As you traverse the freely explorable snowy tundra, with the sound of the wind howling gives you the sensation of being cold. It’s a believable environment and atmosphere to walk around in. In time, you’ll encounter humanoid creatures with glowing orange skin. They are translucent to the eye, and will often appear right in front of you with no chance to react. There are similarities of Kholat to Slender, as eye contact will draw them to you. They can be outran, but in many scenarios these creatures are too close when they appear and will instantly grab you and kill you, it is then you receive the game over screen, and are sent back to the previous checkpoint. Aside from the orange creatures, you’ll see other glowing people of a yellowish-gold color, they are helpful, though they don’t speak. And in any scenario where you see them running, you should be as well. If you don’t run, an orange mist will consume everything and kill you. This is a lesson learned early on, but is a valuable one.

The game also kills you through its environment, with sinkholes in the snow/ice that you can fall through which will also require a load of your last save. Checkpoints are sparse, and can only be triggered by reaching campfires, which are not marked on the map. It wasn’t until very late into the game when I realized that the campfires can be used as fast travel points. It is never explained to you, and would have cut down on a lot of needless walking.

The framing of you being an unarmed protagonist, unable to defend yourself is not unique. In one instance I had found a tall cabin, and after retrieving a note that progressed the story, the cabin began to shake and as I rushed outside to get away, a monster was outside the door, and killed me. Thankfully the checkpoint was right there, but it made no sense why that creature was there to begin with. That natural inclination to leave was the right one, but yet an enemy was placed there. Upon a reload of the checkpoint, the monster was not there this time. The elements of enemy placement and death only seem to give the game unnecessary padding, as Kholat can be completed in roughly 5 hours.

Kholat is technically impressive, and largely bug-free. I did encounter an issue with my save game, where it was crashing after loading my game from within Act I, and only after restarting the game and making significantly more progress into Act II, did this issue disappear altogether. I have an NVIDIA GTX 780, and depending on the area of the game it fluctuated from 30 to 60fps. I did have everything set to the max, but there were times where it struggled. It was difficult to tell if it was my videocard struggling, or optimization issues – if it is the latter, seems like something that can be fixed relatively easily. Kholat also features settings for those who get motion sickness, so turning up the FOV, lowering the headbob, and turning on the crosshair eliminated any potential issues for me.

Kholat is a creepy game, no doubt, but it isn’t the trudging through the snow with a limited capacity for sprinting long distances, it’s the fact that when you complete the game, there’s no payoff for having done everything. It’s an abrupt ending that leaves you with just as many questions as you started with. A game about the the Dyatlov Pass incident should be something like The Vanishing of Ethan Carter, and not a Dear Esther or Slender-type game. Kholat just left me cold, much like the nine hikers that were killed back in 1959.