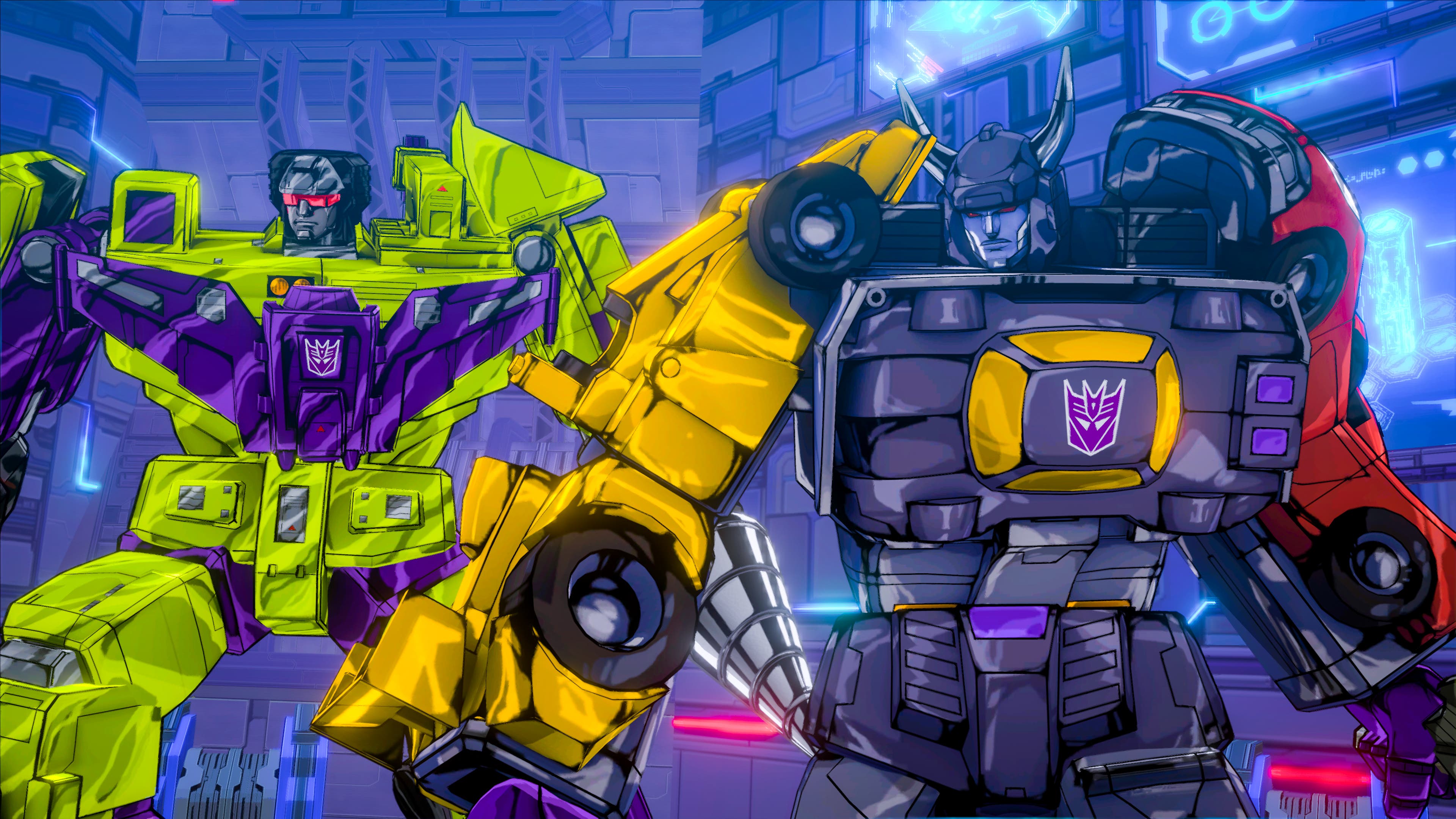 They did it, they finally did it. After years and years of screaming how much we wanted a good Transformers game, let alone a Generation One game, Hasbro and Activision finally threw us a bone. They gave Platinum Games the duties of design and what was crafted is something truly amazing With Platinum at the helm, many would quickly begin to draw comparisons to their other action titles like Bayonetta and Metal Gear Rising. These folks would not be wrong, it is exactly what we’re looking at here. Platinum Games was a perfect choice because they did what Platinum does well: create ridiculous over the top combat in a fun to play environment. Metal Gear Rising was one of my favorite titles to come out of the last generation of consoles and to mix that with my favorite cartoon of all time, my anticipation was through the roof. Transformers Devastation’s controls are tight and combos are dished out everywhere  There’s two attack buttons: heavy and light, and a couple special attacks to use. Combos can be chained together by transforming into vehicle mode for an attack and man, does it look cool. If you reverse an attack at the right time you’ll also enter into a form of bullet time which will let you open up more hits and more combos. It’s extremely fun to play and feels like a lighter version of Metal Gear Rising or Bayonetta.

One thing that surprised me was how Platinum included a weapon crafting system where you can feed melee or ranged weapons into one another. Basically feed the weaker stuff to the stronger stuff to make them even better and to give them buffs like ice or fire. You’ll find chests and enemies that’ll drop weapons throughout the game so I guess you can consider this part loot game as well? Oh who cares, it’s fun as heck to make each Transformer’s signature weapon stronger or to give them something new. You can also unlock the ability to have Wheeljack create new bonus attributes for your characters. Each one gets three slots and you have to play a timing based game to have a chance at a higher level item. It’s one of those games where you have a single bar with good and bad colors on it, then you have to stop an arrow at the right time to get it to land on the good one; simple yet effective. The game isn’t just fun to play, there are plenty of eye-pleasing visuals. In fact, the overall look to the game is simply stunning. The whole game is done in cel-shaded style and every character looks as if he was ripped straight out of the cartoon. The screens you’ll see in this review come straight from the game and it’s something you have to see for yourself. It’s hard to look at the pictures and thinking that they’re actually moving. It’s damn near jaw-dropping.

The plot doesn’t re-tell the origin stories but just picks up in a random spot in the timeline. This could just be another episode of the cartoon or comic book. The plot follows five of the Autobots: Optimus Prime, Wheeljack, Bumblebee, Grimlock, and Sideswipe as they face off against Megatron and his merry band of Deceptions like Soundwave and Starscream. Oh and you fight that teensy-weensy robot they call Devastator, no biggie right? Optimus and his Autobots are trying to figure out where this cybertronian technology that is destroying an unnamed city on Earth is coming from and why Megatron is going after the answer as well. This game hits every mark of Generation One. The characters all transform into their near accurate vehicle modes but not going so far as to getting actual licensing. So sorry no VW Beetle Bumblebee, just a small yellow hatchback. Speaking of small, a small detail that I very much appreciated was character sizes and proportions. All the characters seemed show accurate in how big they were compared to one another. Optimus stands tall over Bumblebee, Grimlock is slightly bigger than Optimus/Megatron, and Devastator towers over everyone. In fact, the individual comstructicons are about Optimus size which makes sense when you remember they have to form a bigger robot. Also, it’s a question most fans will ask, but Megatron does not turn into a gun, he turns into a tank. In fact, I love the design direction Platinum went with him because this isn’t the Generation Two Megatron Tank but Generation One robot mode with his alt as a silver tank. It just fits so well.

Along with the looks, the sounds are perfect. The transformation sound is spot on and things sound heavy. From the hits you give to the footsteps when you walk, everything sounds large. Most of the classic voice cast is back with the two most well known Peter Cullen (Optimus) and Frank Welker (Megatron) leading the way. Just about all the Characters are voiced by their original actors or people who’ve played them in other incarnations. Though not all are there like Starscream and Whelljack’s voice actor Chris Latta who passed away in the early 90’s. The men who took on those roles for this game, Scott Whyte and Christopher Swindle respectively, sound great giving their take on the characters. If you are 30+ year old fan like myself then just go buy this game right now. Stop reading this review and go spend your disposable cash this week on this game. You owe it to yourself. Have kids who like transformers? The bright colors and easy to play action is fun for all ages. My Nephew kept wanting to play more even after beating the game. Go buy this for them and have a family bonding moment over Generation One Transformers. If you’re a casual fan though, you may want to think about it. With all the good there are a few things I would have liked to have seen improved, albeit small. I’d love more Autobots to choose from., hell, give me a Dynasty Warriors style character list of over 50+ characters if we’re dreaming here. I’d also want a longer game. This one can be finished in just a few hours, yes you can try harder difficulties with your upgraded weapons and go out and find collectibles but I wanted to encounter fresh stuff longer. I wanted more. The only thing for me holding this game back is its length and replayability. Give me more characters, give me more story, and this would have been absolutely perfect. Otherwise it’s near perfect, but hey that’s still amazing for a series that’s had some terrible games in the past and all the terrible Michael Bay movies. As I mentioned early, if you’re a fan or have children who like Transformers there no reason not to spend the money, it’s not even a full price release! So Autobots, grab your wallets, que up your music player for “The Touch”, and roll out.