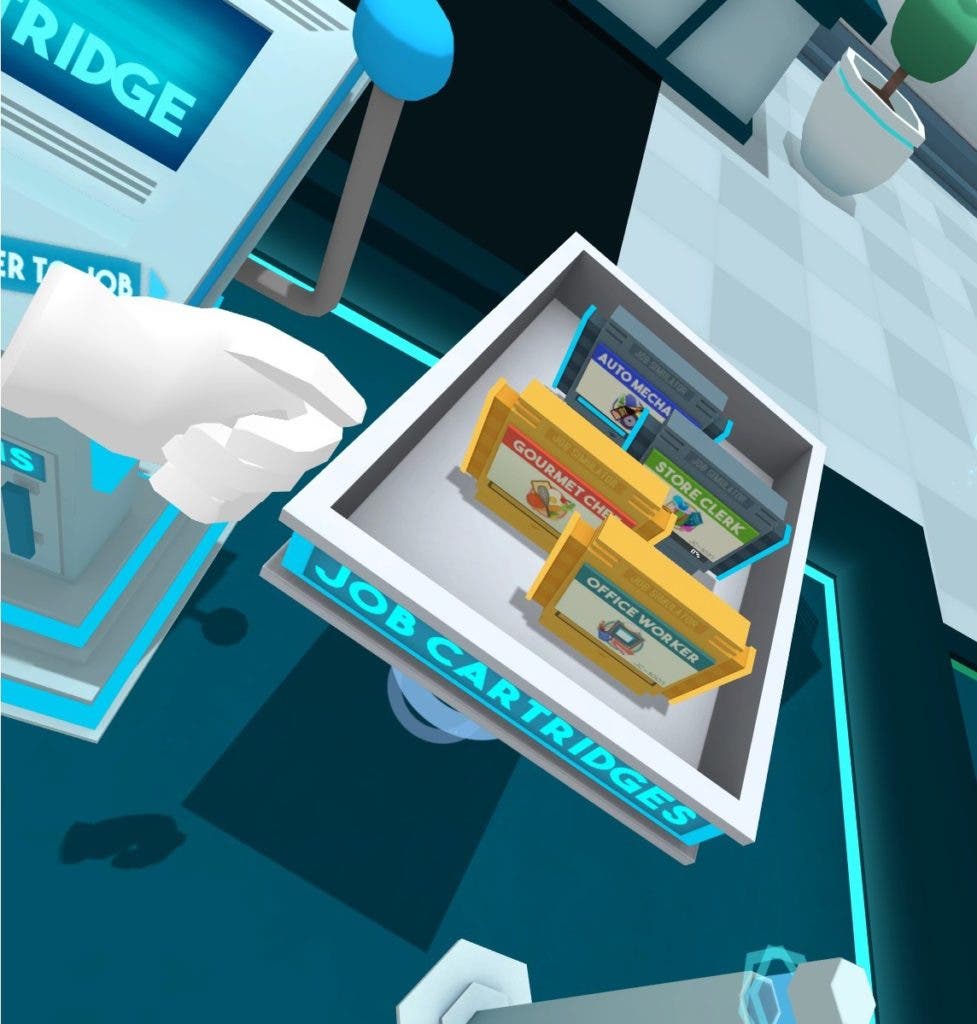 In Vacation Simulator, you make liberal use of the teleporting method of travel. In Job Simulator, you’ll more simply find yourself in a single location—a cubicle office, a small kitchen, in front of a car, or a point-of-sale station. You’ll take on the roles of an office worker, diner chef, auto mechanic, and grocery clerk. You’re tasked with increasingly complex chores to complete, with no real declaration of your progress.

There’s a lot of nuance to this game that probably goes unappreciated without digging around. One of my favorite of these little hidden nooks of the experience was as the auto mechanic. The garage you work in has an old boom box that has a radio tuner on it. One of the available stations is a talk radio station, and it features a duo that is very much in satire of the beloved “Click & Clack”’s Car Talk if it were hosted by two people who had only ever thumbed through a Motor Trend in a doctor’s office. 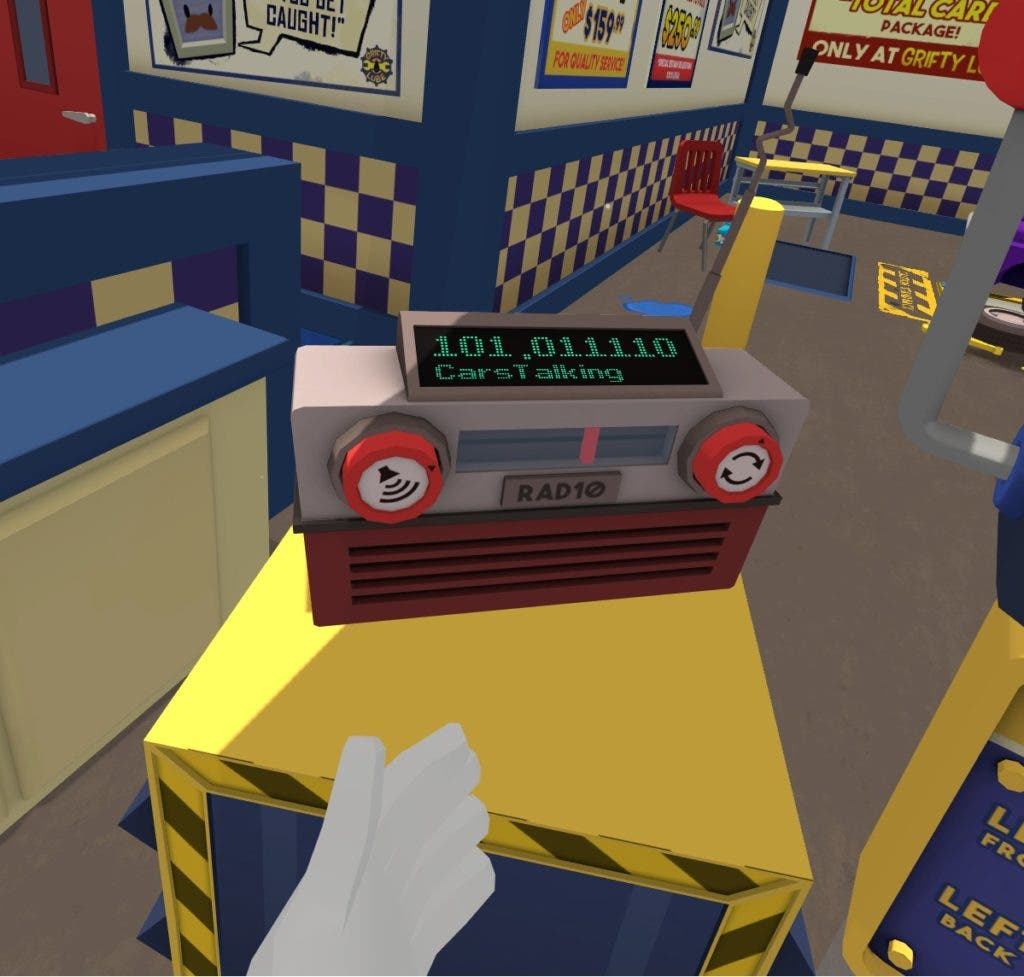 I do have one major exception to Job Simulator’s otherwise excellent work on this game. While playing the role of chef, I was instructed to make a pizza. With a microwave. Microwave pizza. Not even robots deserve that sort of treatment. Eventually, you’ll be told your shift is over or you’ve gotten promoted or some other ending that is accurately dissatisfying in the end. That’s not to say that Job Simulator is dissatisfying; I’m saying that it accurately depicts how dissatisfying milestone moments in life can be.

So, if you’re looking for a paradoxical jaunt of depression and humor, Job Simulator, like Vacation Simulator is the game for you. Genuinely, I enjoyed the game. While Job Simulator always has been the gold standard of VR experiences, its successor greatly improved upon it. Having played Vacation Simulator first, there were quite a few things that I found lacking. This is indicative of the hard work Owlchemy Labs put in to improve upon, rather than just regurgitate. 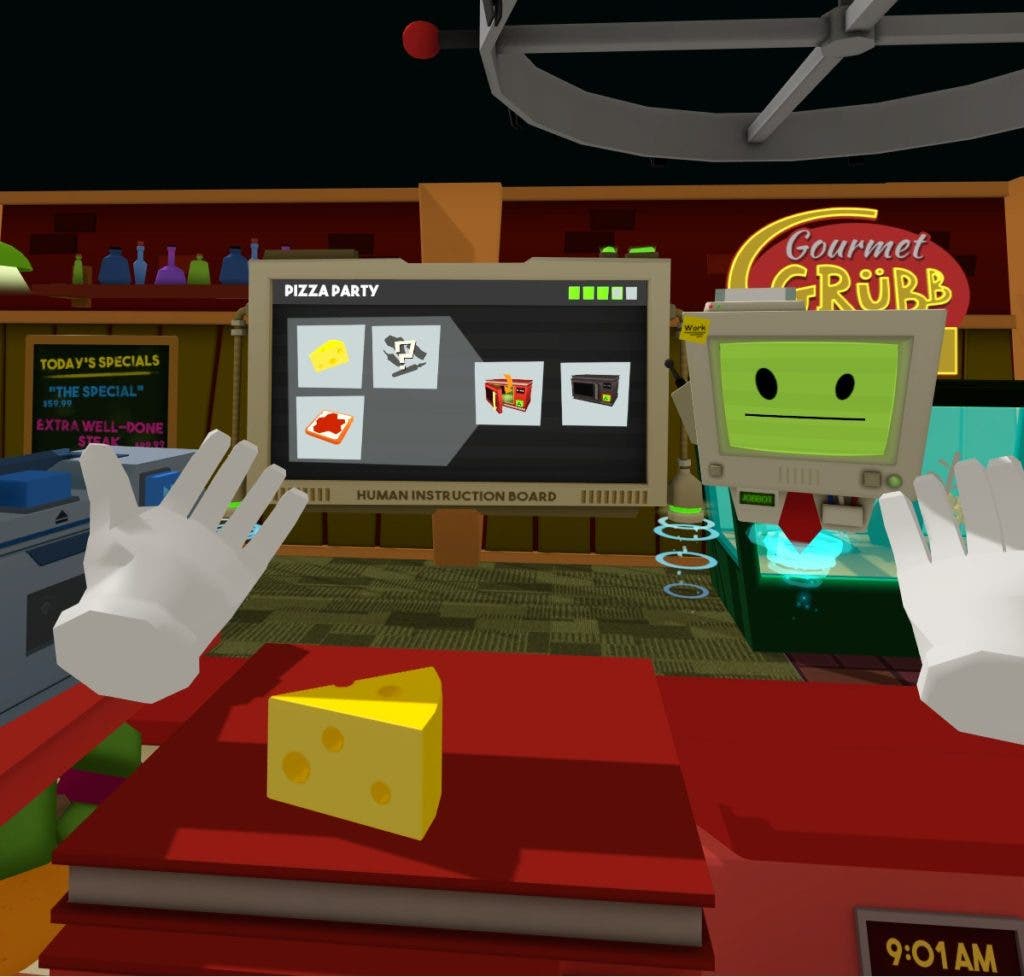 As a result, this game is missing a “small human mode” that I greatly appreciated. My kids loved playing Vacation Simulator and were not thrilled about not being able to also play around in this one. I’m quite glad Owlchemy sorted out the “dropped item” issue. It’s easy, in Job Simulator, to drop an object and have it roll just outside your guardian-safe space. Reaching down all the way to your floor to pick up something you dropped is no pleasant task, if you’re someone with a recent back injury, like me. Thankfully, they’ve implemented a fallen-object -hover mechanic in its successor. Ultimately, it was fun to experience this series backwards as it showed me where good VR game development began—and where it is headed.