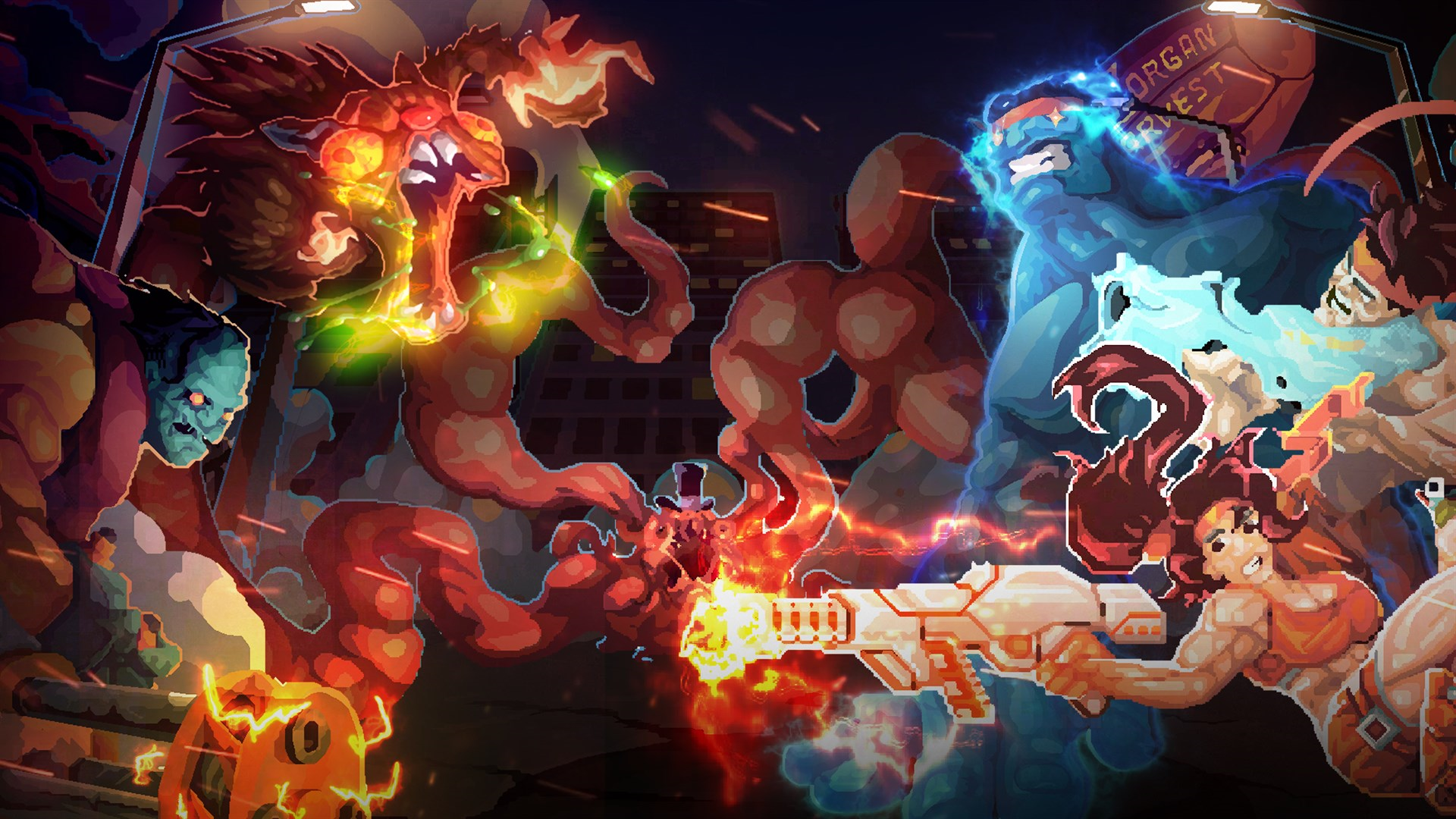 French writer Francois de la Rochefoucauld said, “To eat is a necessity, but to eat intelligently is an art.” Bite the Bullet is this personified. It’s a wholly unique game in which you can eat your enemies, and doing so must be done with thoughtful consideration by weighing the pros and cons of what you’re eating. Eat the competition, or die trying. Bite the Bullet is like nothing else, though it’s a bit of a slog, weighed down not by its characters, but rather too many systems and ideas in-play at any one time. 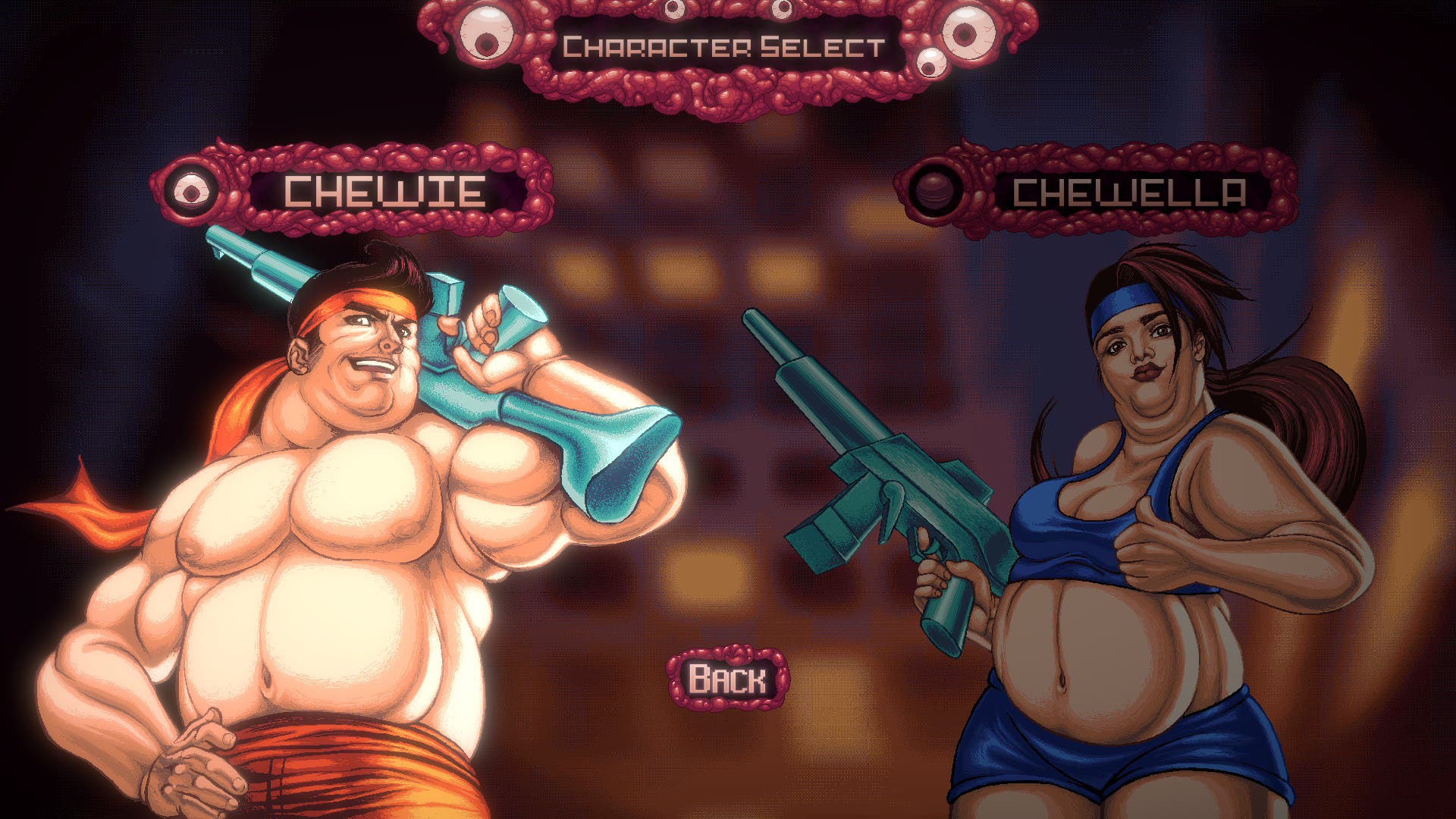 Bite the Bullet features two playable characters, separated only by gender. Whether you’re the aptly named Chewy or Chewella, you’re off on a quest to use your competitive eating talents to help DarwinCorp take over like the conglomerate it wants to be. From there you’re off to take on multi-stage levels like Metal Slug or Contra with vertical and lateral exploration until you find the level’s end. The game touts itself as being the first “Run ‘n’ Gun ‘n’ Eat” which is absolutely true, and the core to the game’s experience.

Aside from gunning down every enemy you see, before the final hit kills them, they’ll fall into a dazed state. This is your opportunity to chow down and consume them. Every enemy, wall, bullet, and boss is edible. Doing so will return health points back to you, but you have to eat wisely as each item has nutritional value. If you don’t run around the level, you can get fat. If you don’t eat enough (as if you avoid eating an enemy altogether in some sort of pacifist take), your attacks become weaker as a result. Everything comes with their pros and cons. You have to consider the enemy’s calories, fat, and protein offering before your first bite. Know the possibility of eating too much fat, or too much protein. You’ll then become a physical reflection of “you are what you eat”. 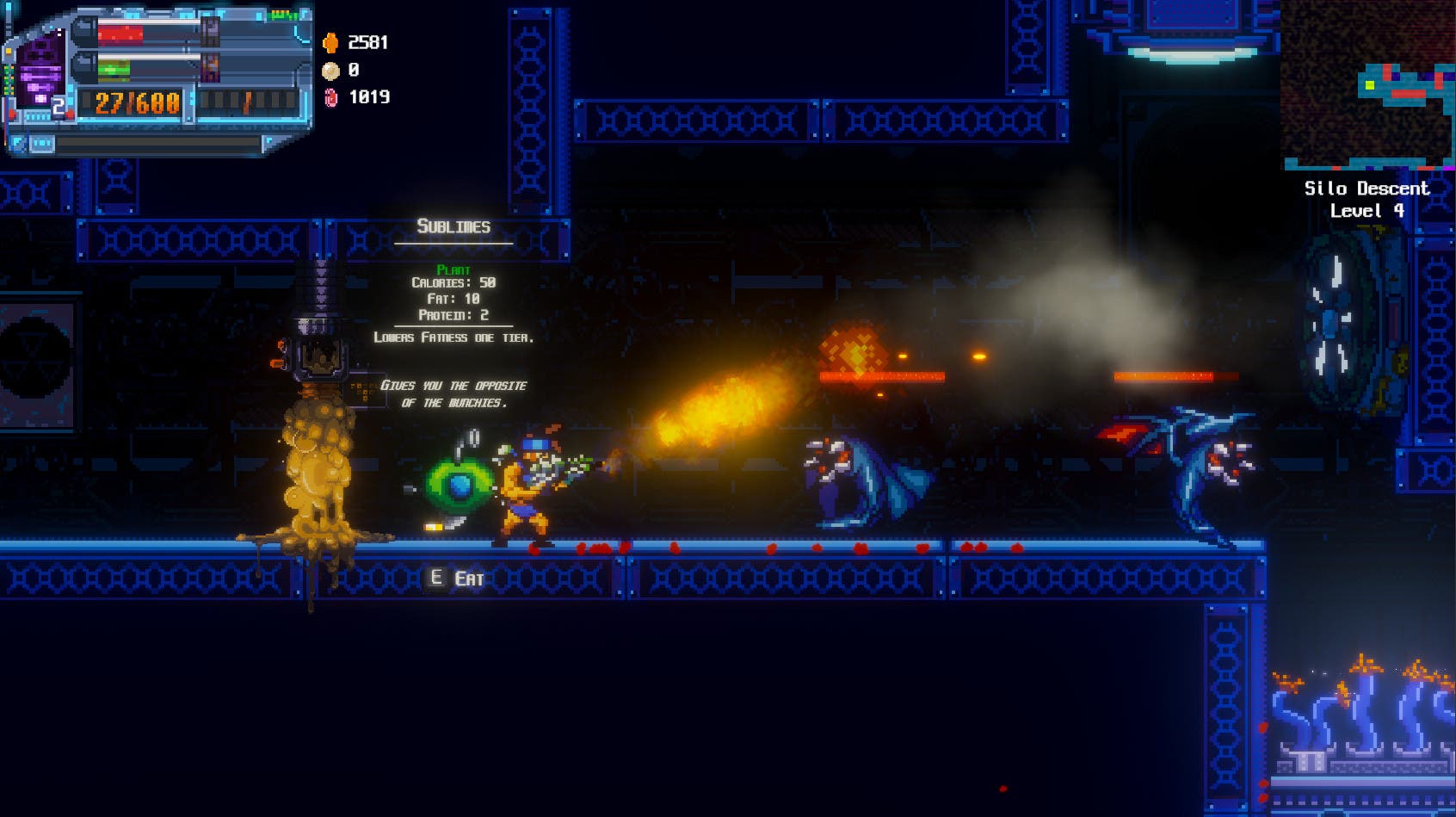 Bite the Bullet lets you craft your own weapons, but only when you consume special characters and enemies. If you have an existing weapon, you’ll likely craft and upgraded version of it to replace what’s there. It’ll remain with you until you replace it again. Special weapon pickups are available that carry modifiers to existing weapons, similar to what you can craft, but unique to the level in its entirety. You can even wear shields of doves to protect you from incoming attacks. While the weapons follow similar archetypes of rifle, shotgun, and rocket launcher – they’re anything but normal. When you build up enough energy to do so, you can transform into the cringe-worthy name of Zombro. The Zombro is big and buff, and entirely melee. Should you get swarmed, you pop this and wreck house.

There’s a lot of levels in this game, and that’s both a good and bad thing. With eight locations, and completing a stage in its entirety takes too long to get through. This is compounded by having to fight a three-phase boss to be truly done. Checkpoints are the sole means of revival, as well as three lives. If you die, you can retry from the last checkpoint you crossed. But know that checkpoints only good while playing. If you exit to the headquarters, to the main menu, or the game entirely, then you have to start a stage from the very beginning. This can be quite the gauntlet to get through. Bite the Bullet also relies heavily on teleporters, and are necessary to use. When you reach the end of a level, you know because of the scale you must throw up onto. Here you get to spend upgrade points, and then move on to the next. 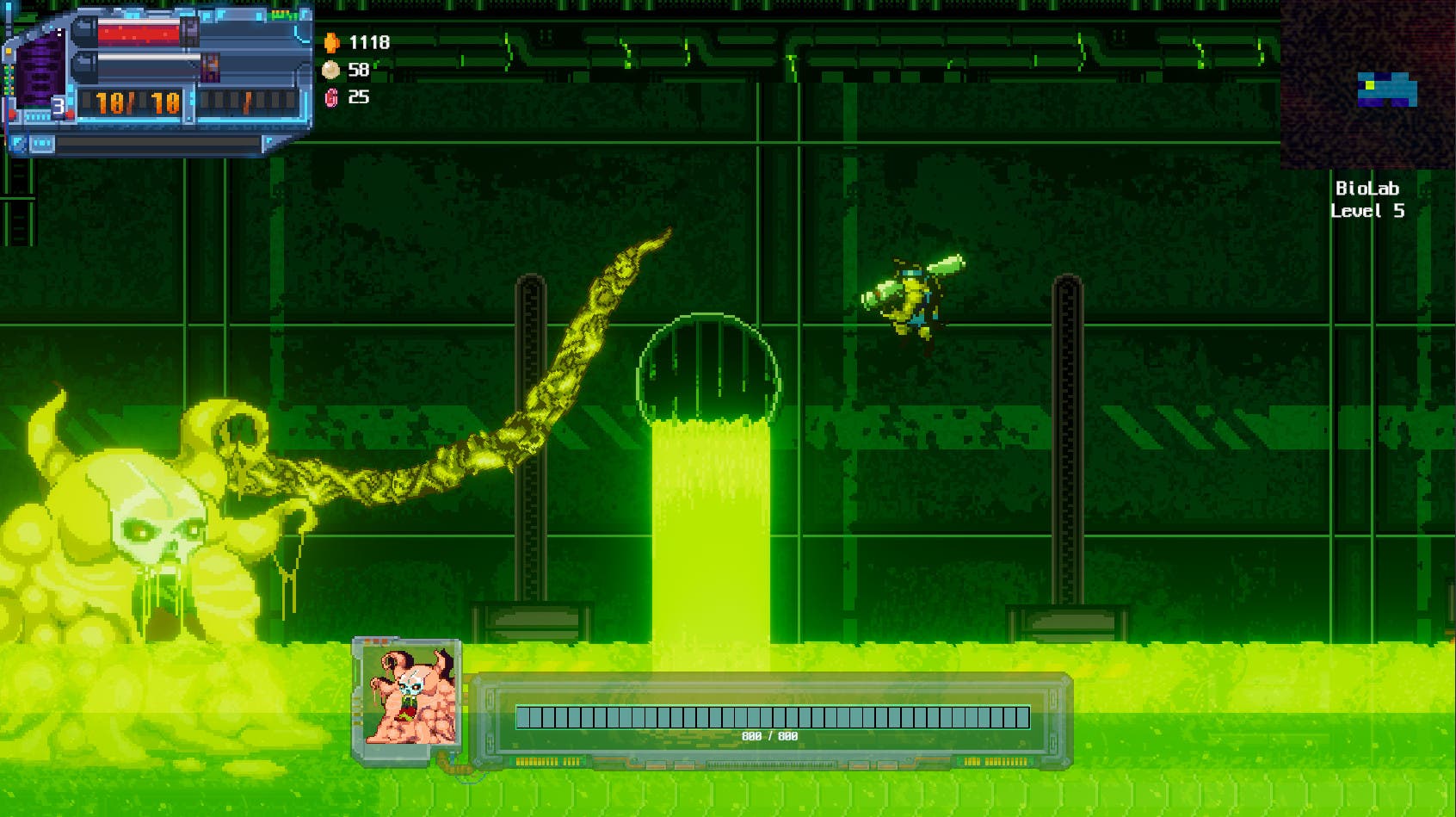 Next to Path of Exile, I’ve not seen such a lengthy, and branching skill tree to invest your points into. You can spec yourself into four classes: Carnivore, Herbivore, Omnivore, and Robovore. Yeah, that last one means that you eat robots. As I said, nothing is off limits. Once you begin down a path, you can end up cutting yourself off by not being able to eat any of the other food types. So if you spec yourself as a vegan, then you can’t ever eat meat to replenish yourself. There’s certainly some risk/reward to going down this path, but I was never able to go that route. But the perks and abilities you gain but cutting others off can be extremely powerful. In order to be able to upgrade, you must eat spoiled food. Lastly, there are bandanas you can collect by completing stages that give double ammo from pickups, enemy health drop increase, or knockback immunity. Bite the Bullet is all about buffs and speccing out your character in ridiculous ways.

Bite the Bullet offers lots to do in every level. There’s timed challenges, special stages such as a hamster rampage, tactics challenges, edible targets, and things to collect. There’s no shortage of things to chase or attempt while you’re in a level, which helps pass the time where I found things feeling like they were taking too long to get through. 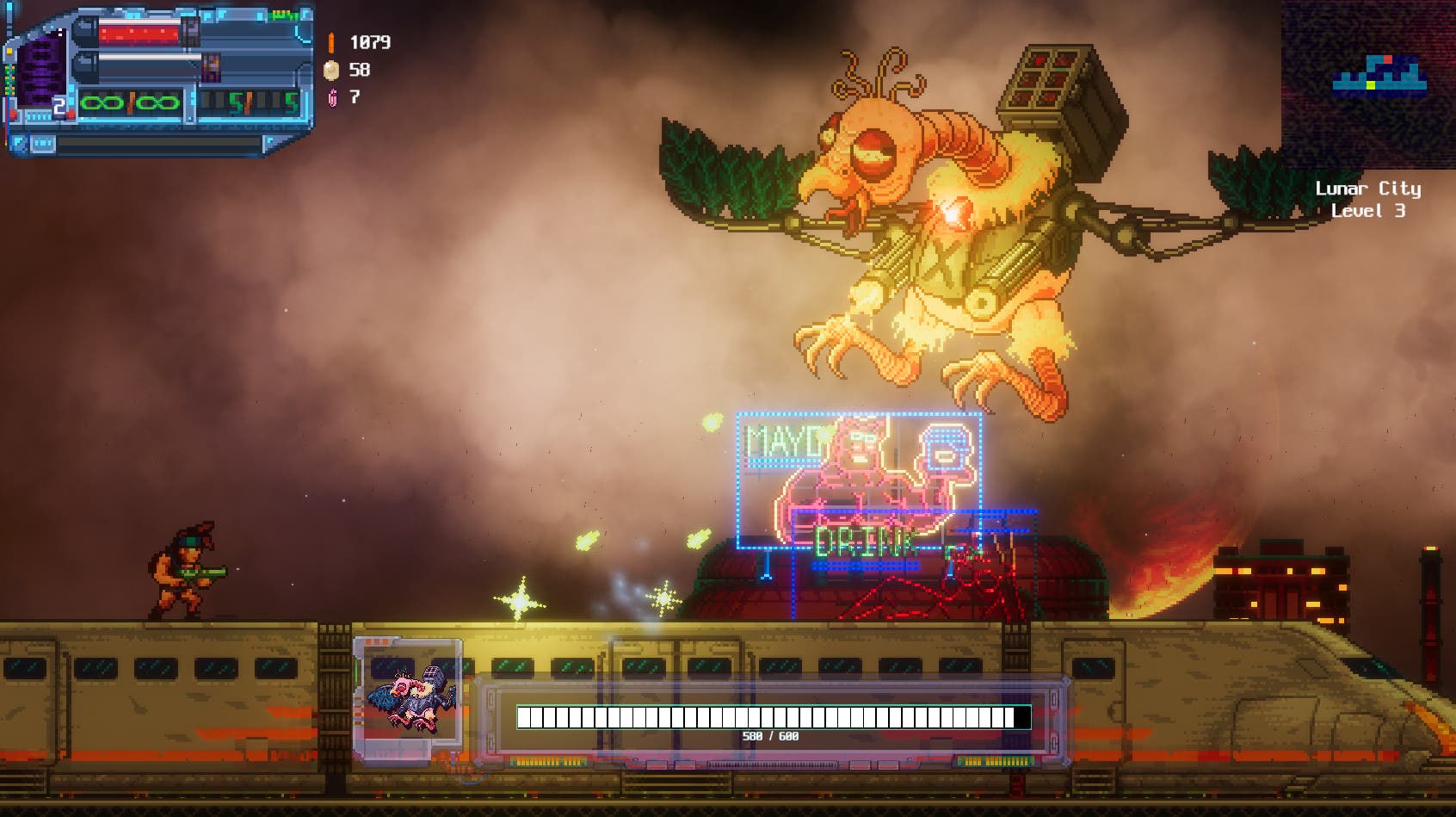 Keyboard and mouse works okay, but it doesn’t seem to be the intended controls. So I ended up switching to gamepad and actually had a better time. Seems like a weird recommendation, but it does feel the best. The main problem to the keyboard and mouse is the fact that the characters have momentum or drift when moving. So even if you let go of a key, it will continue to move for a few more steps. For a game that features a lot of jumping, platforming, and precise movements, this gets to be problematic.

Bite the Bullet is gorgeous, the 16-bit era is given new life thanks to the artwork on display. The game is very much retro, but the modern effects like bloom are used wonderfully. Mega Cat Studios knows retro, as the blending of old and new has never been done better. 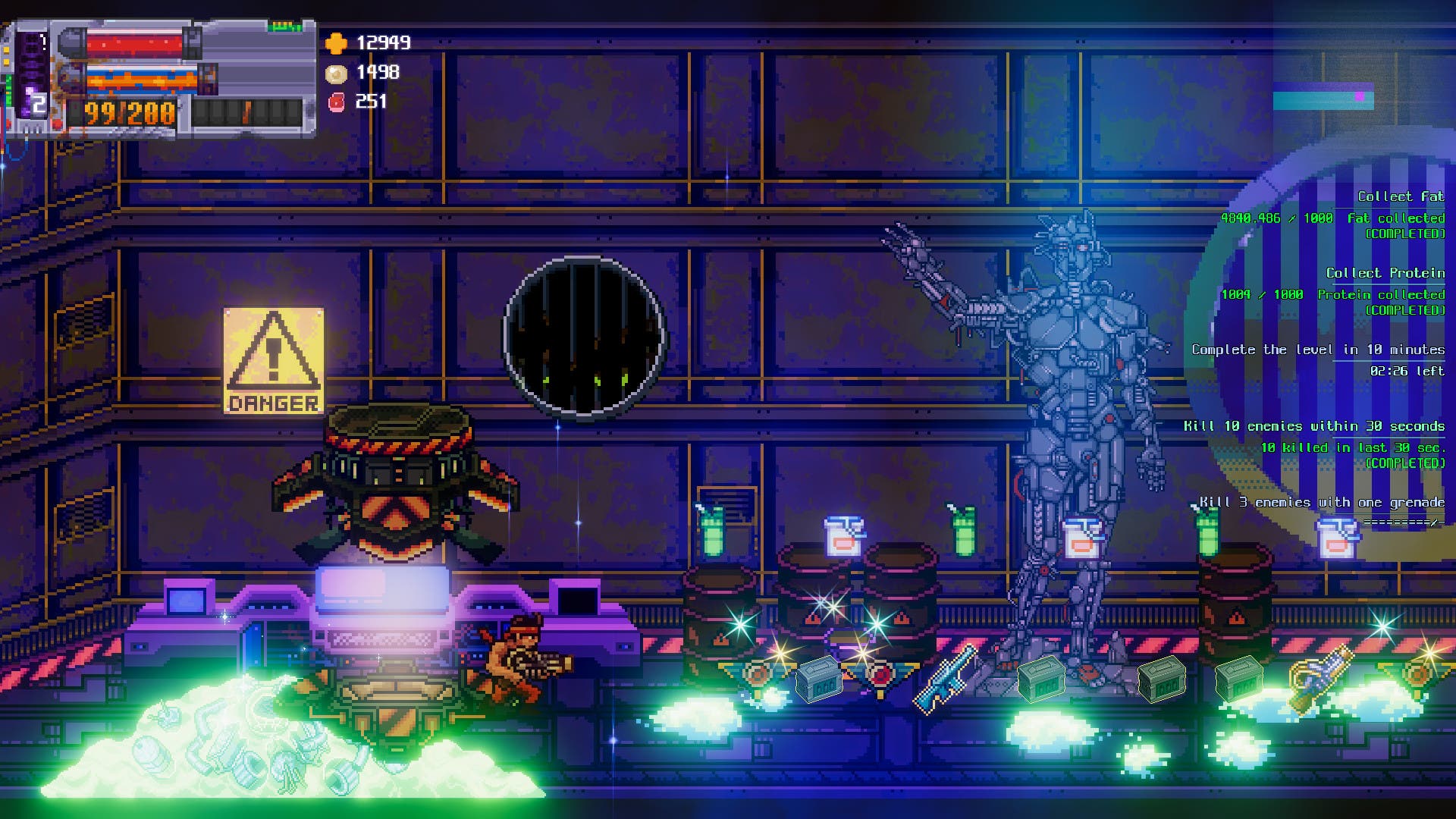 Bite the Bullet is mostly worth what they’re asking for it. It’s an unfocused gem, relying on a lot of mechanics, systems, and subsystems that gets in its own way. The traditional run and gun gameplay is amplified by being able to eat almost everything in sight, and the artful precision one must employ keeps you always thinking when other games wouldn’t. Bite the Bullet is a clever, but flawed game drenched in nostalgia that never existed, while also reminding you to be careful what you eat.