I wanted to take the time to highlight a fantastic game collection app for iPhone called “Game Vault”. It allows you to create a portable game collection to track and show off to friends. I recently caught up with the creator, Kevin Gudgeirsson for an interview on the app a few other things.

I really enjoy your app and have been filling out my game collection. I think it’s too often that someone goes “What games do you have?” and you rattle off a few game names, but always forget something. You go home and realize you had a similar game or something they wanted to borrow. Now you can pull out your iDevice and give a complete answer. Is that close to your vision of what Game Vault would be for?

Definitely. Ever since I got my hands on an iPhone this is something I have wanted. There are other apps that I have had tried out in the past, but none of them had quite enough content to allow me to add my entire collection: more obscure titles, downloadable games, etc. I really wanted people to use Game Vault not only to create and maintain their collection, but to share their game library with each other. So many times in the past I have forgot who borrowed a certain game and one of my favorite things about Game Vault is the ability to track who I have let borrow them.

Do you think you could have done it without the Whiskey Media API, or was that in your mind from the get-go?

Using the Whiskey Media API for Game Vault was on my mind from the very beginning. Giant Bomb (being a wiki based website) has unlimited possibilities for its game content which is really what is missing from other game collection apps. The Whiskey Media API gives users the ability to not only browse by title, but also by other game categories such as genres, developer, platform, etc.

How did you get started in app design?

To be honest, it was a lot of trial and error in the beginning. It started with a very bare bones structure which led to a more user friendly and content driven app. Game Vault sticks very close to the standard iOS protocol to give the user immediate familiarity with the app. I wanted people to download the app and immediately know how to use it.

Is Game Vault your first project or do you have other apps out there?

Game Vault is my first iPhone app. I am currently focused on extending features for Game Vault, but have a few other ideas for apps in the future.

I got a ton of great feedback after the initial release of Game Vault. The vast majority of people wanted a way to add a game to their collection even if a specific release does not exist in the Giant Bomb database. I can now happily say that this is available in Game Vault 1.1.0. This allows the user to create a custom release, edit the image (select a photo from the photo library or take a photo), title, region, release date and game rating. Other features added include viewing games from the same franchise, show/hide region flags, and multiple performance enhancements.

I’m sure you get asked constantly what you have planned for future versions. Does it work on iPad? Will there be an Android version?

I am currently working on a bunch of new stuff. Some of the other ideas I am working toward include barcode scanning, import/export system, and an iPad compatible version, just to name a few. It’s tough to commit to new versions and expansions since Game Vault is a solo project, but I would love to extend the app to other devices sometime in the future.

I have been overwhelmed by the amount of positive feedback I have received from the gaming community. The app currently has over 3000 downloads and counting, which far surpasses any of my initial expectations. So yeah, Game Vault is doing well.

I noticed that in description that the app price of FREE is not going to last long, what price are you looking at going to and how much time is left until it’s no longer FREE?

As of February 22nd, Game Vault is now 99 cents in the app store. I made sure to give people a good amount of time to download the app so I could get as much feedback as possible before charging for it. 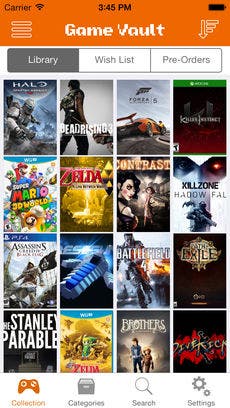 Get the Game Vault app from iTunes here: http://itunes.apple.com/us/app/game-vault/id413568394