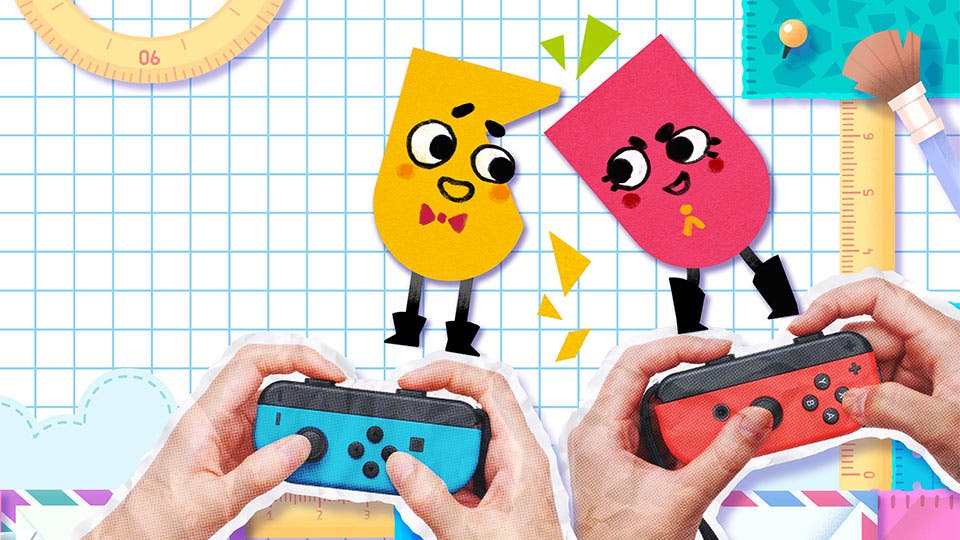 Snipperclips – Cut it out, together! Review

Snipperclips – Cut it out, together! from SFB Games is an unparalleled delight in both frustration and fun. The frustration element is at a minimum and only comes from the game requiring communication and coordination that can lead to it. The fun is finally getting everything aligned to move on to the next level. The music is a joy to listen to, and Snipperclips will be a great party game to introduce your friends and family to the Switch, even though it doesn’t use all of the features of it very well. Snipperclips‘ subtitle is “Cut it out, together!” meaning you should play with at least one other person, and it is certainly the ideal way to play the game. Snipperclips does have a way to play solo, and is rewarding as such, but not as tricky as trying to communicate what the other player or players need to do. This is where the frustration comes in, one person will know how to complete the level, and have to communicate that. Thankfully, there’s no timers or anything that inhibit taking your time and working carefully together to avoid such frustrations. All you need to do is fill a meter either matching the shape of the dotted outline, or reaching the goal with the object they gave you to move on – but that’s the easy part, the hard part is working with someone to get there.

In a typical scenario of playing with two players, the game uses both joycons of the Switch, rotated horizontally to play. The tutorial does a great job at teaching you how to use its mechanics. At first you’ll be cutting each other to pieces, just because you can and partly learning the controls. Eventually you’ll compose yourself and be rotating, jumping on top of each other to reach new heights, overlapping to cut specific shapes, and reforming to undo major cuts that hinder progress. Snipperclips uses puzzle elements and physics for its levels that can create hilarious moments when things don’t go your way. Aside from the main mode, there’s a Party Mode that allows up to 4 players across the same levels. Blitz Mode is a two-player game that goes outside of the main levels to be competitive and let you play basketball, hockey, and a deathmatch of sorts in which you must cut one player into scrap to win. The 2-player and 4-player modes are a great way to show off the game to people.

Snipperclips – Cut it out, together! has three themed worlds to play in, each world progressing in difficulty, even if the levels are repeating methods. The first of which is paper from a sketchpad, the second is videogame themed, and the third is science-themed. Each world has a variation on the main theme, but the soundtrack as a whole just sounds like a Nintendo game, complete with catchy tunes that remain in your head and never overstay their welcome when playing. Snipperclips – Cut it out, together! is a great tug of war between frustration and fun, but in all the right ways. The replay value of people you’ve played with hurts because you already know the solutions, or will recall them quickly. That aside, Snipperclips is undoubtedly a great party game that’s dying for new levels and themes, but will satisfy the crowds gathering at your house to play it for long enough.

A Nintendo Switch code was provided by the publisher for review purposes.