If you’ve been remotely tapped into the arcade scene over the past few years, it’s likely you’ve brushed shoulders with Killer Queen. Its massive, dual-cabinet presence is domineering, impossible to miss, offering ten players the chance to duke it out in groups of five for supremacy and bragging rights. Matches tend to draw crowds of onlookers as the competitors shout orders, talk loads of trash, and usually erupt in cheers and laughter. It’s a unique, exciting experience, the only shortcoming of which has been that you have to be in an arcade with cabinets to play it. 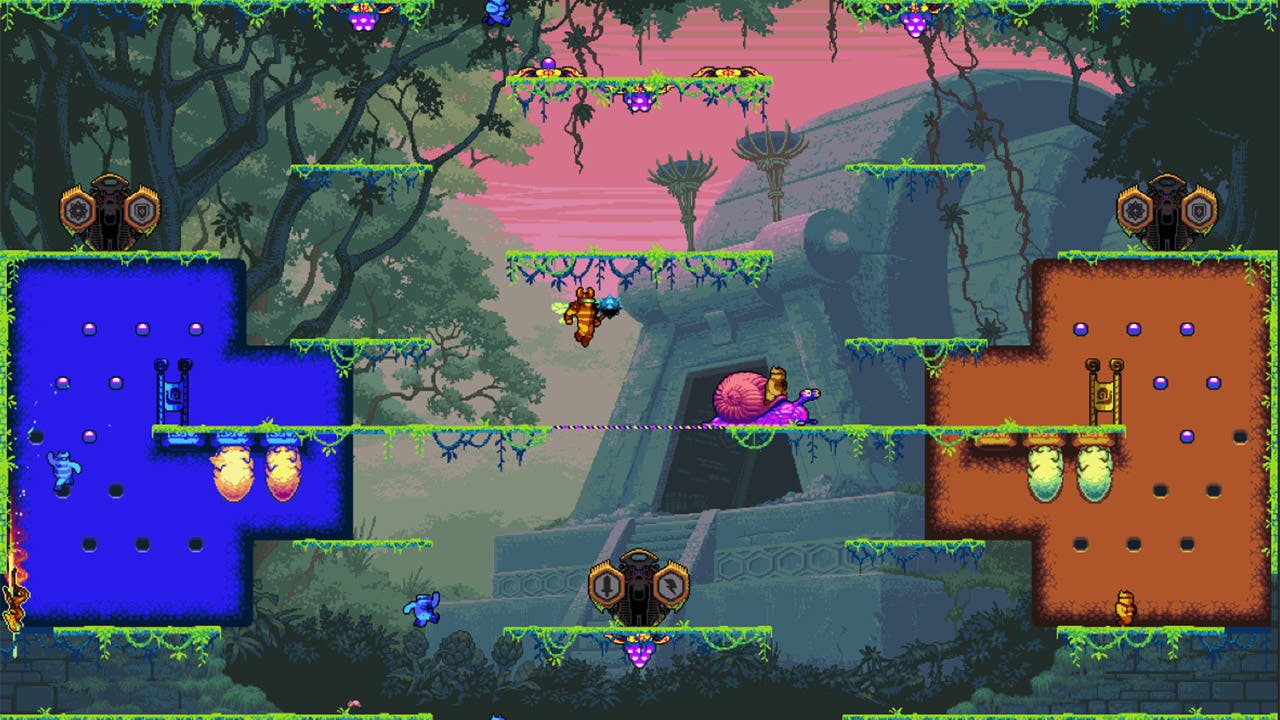 Now that gap is finally being bridged with Killer Queen Black, the reworked release for consoles and PC tailored specifically for the home and online experience. It’s an ambitious undertaking; playing Killer Queen in the arcade setting is one of the more special things I’ve had the opportunity to take part in, and a big part of the experience is being right there in the thick of it with your friends and enemies. Does the experience translate? Is anything lost by making the move to in-home systems?

The Rules of Engagement

Before going further, let’s circle back for a quick summary if you’re not familiar with the core game. Killer Queen Black pits you and three of your friends as a Queen and three Workers against another team on a symmetrical, two-dimensional arena. Your goal is to work together to defeat your opponents, but the twist is there are not one, but three ways to achieve victory, and the true challenge lies in balancing each of these against each other as your team tries to pursue at least one (or ideally more) of these paths while thwarting your opponent’s attempts to do the same. Needless to say, things get complicated fast.

You can win with a Military victory, by killing the other team’s Queen three times; with an Economic victory, by filling your hive up with berries; or with a Snail victory, which involves literally riding a snail to the “goal” on your team’s side of the battlefield.

Only Queens can attack, unless your worker has upgraded to a Soldier. Workers can upgrade by grabbing berries and entering gates to select a power-up, assuming the gate hasn’t been locked to one team or another by their Queen. Soldiers can attack with sword, morning star or laser rifle. Queens and Soldiers can’t pick up berries, but Workers can carry them back to the hive and deposit them.

Queens often spend their time running around the field locking down gates, swatting away enemy soldiers, and generally trying to create havoc for the opposing team while also exchanging harassment with the enemy Queen. Workers and Soldiers have to decide how best to serve their team from round to round between offense, defense and support. All roles are faced with decisions about how to juggle these responsibilities, and running interference becomes as important a part of the equation as trying to secure wins directly.

Winning requires a delicate balance of several things at once, but also a healthy amount of adaptability. It doesn’t take much for a tight game to suddenly go sideways and turn drastically in one team’s favor. A skilled Queen player can do a lot for their team, but usually isn’t enough to win alone, though a novice Queen can easily spell defeat if they can’t keep themselves out of harm’s way. 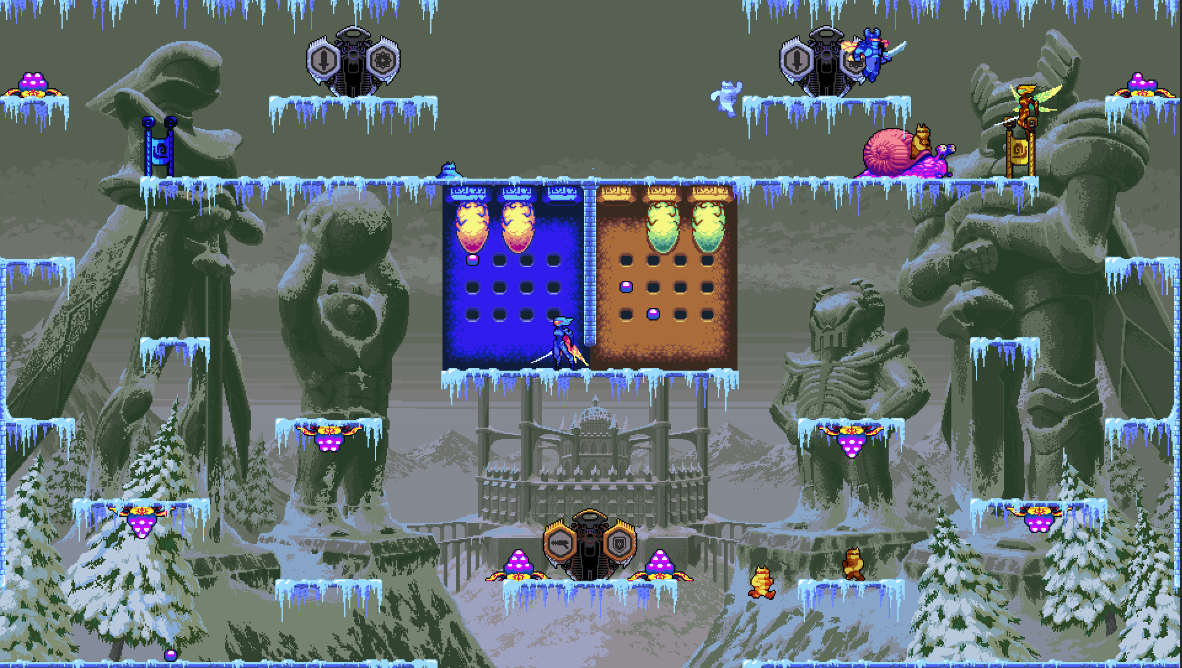 Generally speaking, little has changed in Killer Queen Black. The core mechanics are all the same, with the one major difference being that teams are made up of four players instead of five to adapt more cleanly to the traditional four-player experience on consoles. There are six battlefields included, some familiar from the arcade version and others brand new. The battlefields are clearly tuned ever so slightly to accommodate eight players instead of ten, but overall, little else about the gameplay experience has changed.

All of the trappings around the core game are brand new, though. The original UI and attract modes from the arcade version don’t really work in the context of playing at home, and sure enough Killer Queen Black sports a brand new UI that features a proper menu system and a pretty solid lobby. Selecting maps is now a clearly defined (and blessedly easy) process, and picking roles is a little trickier since both teams have to be accounted for, but the interface solution works well enough.

Matches can be set up through a variety of ways. There’s pure local co-op for up to four players plus bots, local network play for eight players spread across two systems, and online play where you (and your friends) can face off against other teams from around the world. Online play is available via “Quick Match,” “Ranked,” or “Custom Match” modes, and the game even supports cross-platform multiplayer on Switch, PC and Xbox, which is a huge and welcome bonus for owners of the game, not to mention a nearly essential decision to ensuring a rich player pool.

Oh, and one more thing; in addition to the typical Gold and Blue teams, there is now also a very special Black team, a mantle held by the current leader in Ranked Online Play. So long as that team remains undefeated, claim to the highly coveted Black team regalia stays with them. Once defeated, it passes to the new champion, and every swarm of bees looking to make a name for themselves will soon come calling. The stakes for this designation will become truly great when the game launches support for the Black Team Streaming feature, in which every single game involving the Black Team will be automatically streamed for everybody in the world to watch. This is a stroke of brilliance for the competitive scene and I’m really excited to see it in action when the feature rolls out.

The Thick of It

So, back to the burning question; does Killer Queen Black successfully make the leap out of arcades? Does it work on home systems?

Overall, I’d say absolutely yes. The fact of the matter is that Killer Queen Black is a damn good game regardless of the environment its played in, and the high-intensity, super sweaty in-person competitions exist primarily because the game is so strong, not the other way around.

The closest thing you can get to the arcade experience is of course getting eight people together spread across two Switches (and hopefully two TVs) to duke it out head-to-head, and while I haven’t had the pleasure of putting that situation together quite yet, the fact that its now an option is amazing and something I plan to capitalize on.

Short of that, local co-op with four players (ideally one Queen and one Worker with optional bots) locally is also a pretty decent way to go; it’s enough to get close to the “full fat” experience without the inconvenience of trying to wrangle a bunch of people’s schedules.

As for online play, I think this will be the true test of the game’s ability to survive (and thrive). The draw of Killer Queen Black is unique enough that I have little doubt that it will find a strong audience. What remains to be seen is how well the system works at scale after launch, and how smooth matches can play out with eight players connected. More specifically, how will the game correct for one or two players with poor connections, and what kind of impact would that have on overall match quality? 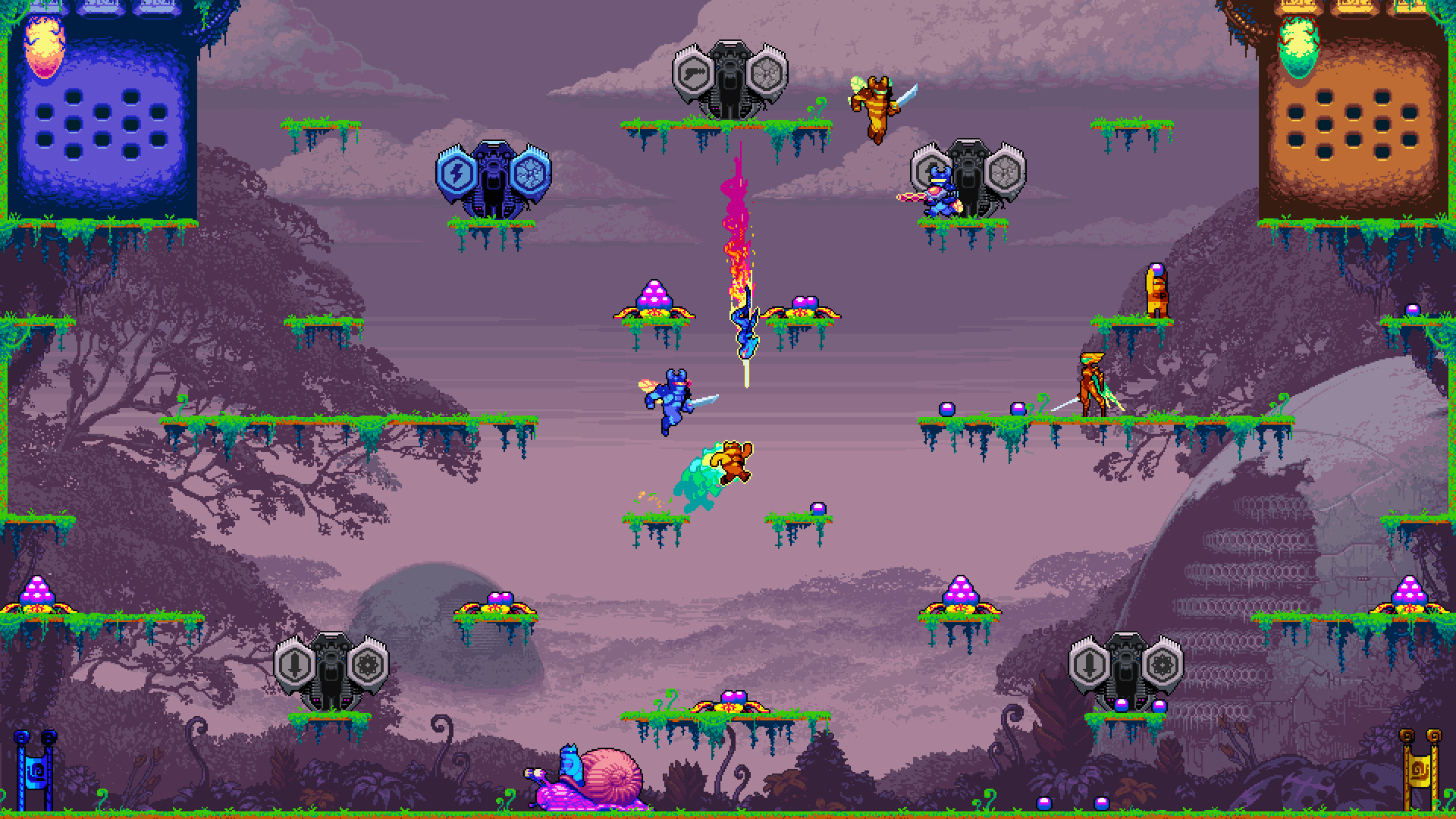 In my experience, matches felt extremely smooth, and I didn’t have any issues with connections or lag during my time play testing. The experience of hopping into a Quick Match session solo was really good; you pick your preferred role type, (Worker, Queen, or Either), and then you get tossed into the matchmaking system to get connected with other players. While the game is best enjoyed as a full team, being able to get into games on your own whenever you want is a compelling feature and one that I’m excited to use to practice.

Ultimately though, winning isn’t just about skill. It’s about communication, and how effectively a team can work together to react and capitalize on openings. Killer Queen Black supports voice chat which is going to be an essential component to success, but it also includes a nice shorthand quick-communication system if you prefer to keep quiet, though in practice the options available to you are not going to be nearly as useful as being able to directly state intentions. For what it’s worth, voice chat audio quality was excellent, and people were making good use of it to coordinate with one another.

Also useful is the ability to quickly highlight your character on screen with the press of a button, which is essential in frantic moments where your portion of the battlefield crowds with multiple players and you suddenly lose track of your Worker in the chaos.

Killer Queen Black is more or less everything you’d hope it to be. It’s a faithful adaptation of the original arcade release, properly scaled for home play and with all of the tools necessary to play it and find your match ups however you want. Killer Queen‘s big success in arcades came from the competitive scene, and I’m really curious to see how the competitive scene develops here. I think there’s incredible potential for it to really take off and for Killer Queen Black to reach new heights, and all of the necessary elements are present.

There was never any question in my mind as to whether Killer Queen Black would be fun; this was more or less a given, and sure enough it is every bit the same game. All of the button mashing, the quick thinking, sweaty-palmed moments of glory and despair are here. The intricate layers of strategy are well in place, and the addition of the new Soldier types will add an even more varied dynamic to matches. Most importantly, the Snail is still a major threat and is not to be trifled with.

The only major drawback to Killer Queen Black is the inherent level of approach-ability that comes with the game. Killer Queen is not a casual experience; it’s very much for competitive players who are seeking to get really good and dominate their competition, and if you’re looking for a laid back online experience, this ain’t it. You will get crushed if you go up against a proper team that knows what they’re doing. You will often lose games if your team is not coordinated, or if you don’t have a strong player or two to carry you.

Chances are though, if you’re looking at whether to play Killer Queen Black, you already know what you’re getting yourself into. The only important question is whether it delivers on the experience you’re looking for, and that answer is yes. Playing online by yourself isn’t quite the same thing as stepping up to one of two paired arcade cabinets to duke it out in person, but make no mistake that this is the real deal.