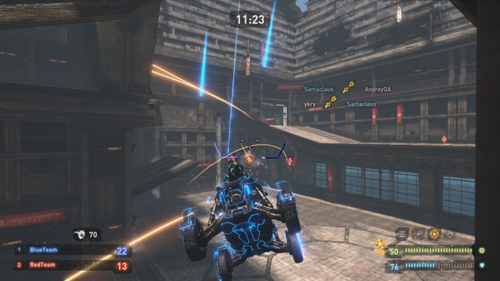 The guys over at Gelid Games have created the PSN (or SEN or whatever they are calling themselves these days) title Wheels of Destruction. The name alone sounds like a fun time; gnarly explosions, near misses, and lots of action instantly race into my mind.

Easily the best way to describe this game is Team Fortress with vehicles. It’s a class based team shooter with three modes of play; Deathmatch (DM), Team Deathmatch (TDM), and Capture the Flag (CTF). I don’t think I need to go over what these are but in case your new; DM is a killing free for all while TDM is exactly how it sounds, death match with teams. CTF is no different than any other CTF game, drive to flag, take it back to your base. Team with the most flag captures wins.  You can play these online or in a single player offline mode with bots. The lack of a true singleplayer story is disappointing, but I’m not even sure how you’d do that. If you die, don’t worry about the respawn time – it’s only a couple of seconds and I felt like I was right back in the action.  By pressing R3 in a match you can pre-load the next car class after your next respawn to change things up mid-game.

The classes are standard fare for a team based shooter. There is the Heavy, a slow and strong FBI looking tank; the off road buggy Engineer that excels at using powers like the shield and boost. Your standard class is called the Soldier, a 2-door car with plated armor and comfortly in the middle of the road stat wise. The sleek Assassin is a 2 door hatchback that is very fast and packs a nasty punch, but is easily taken down. Finally there is the Scout which is reminiscent of a Lamborghini Countach and is lightning quick. In all honesty, this would be a pretty competent team based shooter, if you can get past the awful controls.

The controls are some of the worst I’ve ever used for a driving/combat game. The vehicles drive like the Halo Warthog where the car will drive to wherever the camera is pointing. This is mistake number one as it makes the car very cumbersome to drive when trying to navigate around some of the tight spots and corridors. You can easily get stuck on walls or fall off a cliff, mistake number two. They alleviate some of the issues by adding a drift button causing your car to slide but that will not help you with mistake number two. The aiming and the steering are mapped to the same analog stick.  After playing a few matches, I knew what was causing me so much grief with mistake number one. Trying to shoot and drive becomes impossible.

I hope that in a future update, that Gelid Games gives the player the ability to assign the right analog stick to aiming and the left to steering; you know the standard tank controls. This would have been the best way to have handled this situation but instead they choose to map them both to the left stick and leave nothing assigned to the right. I’m sure careful thought and hard work went into this does, but they really should have tested the controls more. You might be thinking “why is it so bad?”  Just imagine trying to walk straight but look to your left, by having both the steering and aiming assigned to one joystick, you would not be able to accomplish this.  Essentially, if you’re trying to drive around an opponent and fire, you can’t because when you aim the weapon at your target, you end up driving towards them.

Graphically, it’s ok; it’s nothing spectacular but it is using the Unreal Engine and as a result is nice to look at. You will notice the textures on the maps are slightly muddy if you stop and take a look, but you should always be moving anyway so it’s not something that will end up distracting you. The environments are varied from dark warehouses to ocean side cityscapes. The guns firing and lasers shooting look like, well, guns firing and lasers shooting while picking up shields for your vehicles give you a snazzy looking glow reminiscent of Tron.

As I said earlier though, if it wasn’t for the frustrating controls, I’m confident that this would be a decent car combat game. Being that it’s a downloadable title and not $60, this would have been something enjoyable to play against friends in between other games. But honestly, unless the controls get tweaked, save your 10 bucks towards Twisted Metal if you want car combat on the Playstation 3.