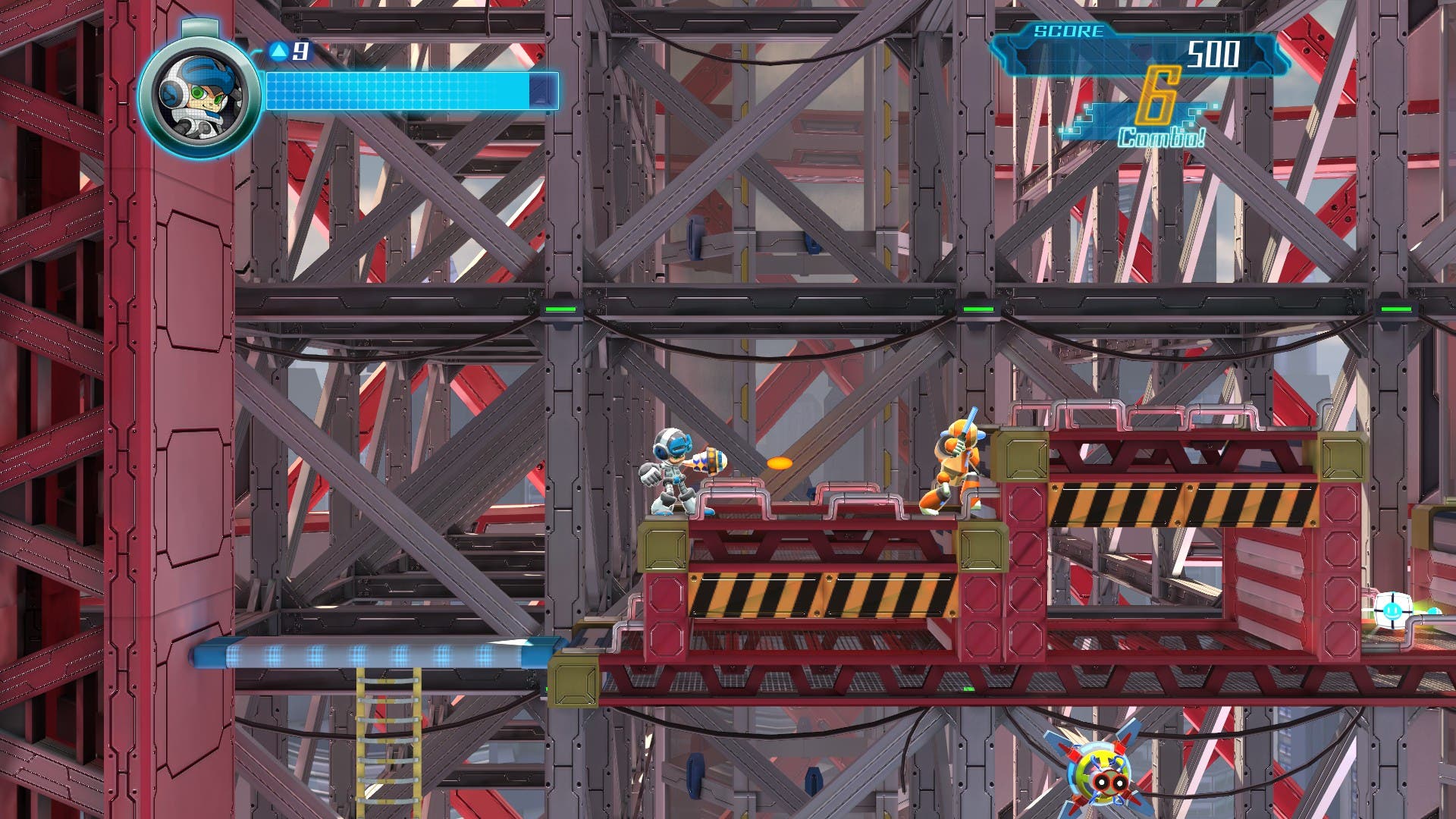 By Justin Celani (@Rad_Dad_Redempt)
Lights Off

It’s been an extremely long time coming for Mighty No. 9, and that in itself has been a battle all on its own. When a creator of Megaman comes out with a Kickstarter to create his own version of a “Mega Man” like experience, people were all on board and who could blame them? Finally Mighty No. 9 is going to come out to the public and backers will finally get to see a game they helped fund release. Is it truly as mighty as the name might imply though? Mighty No. 9 is a game that hearkens back to an older era of games, ones that were on the SNES, Genesis, and other consoles that would be called retro today. A simpler time, where games required more finesse with platforming, shooting, and at times were extremely frustrating. The game itself does a great job of feeling like those older titles. There is no way anyone playing this, having grown up on those consoles won’t see the similarities.  Though in an odd way, the way the game is presented is almost clashing with the genre and game style it’s trying so hard to recreate. Where as most games in this genre tend to stick to very limited story exposition, Mighty No. 9 throws it in your face…hard.  The opening moments are filled with so much dialog and exposition, I grew immediately frustrated.  I’m not an inpatient person but again there is expectations at play here for the genre they are trying to recreate and it truly soured the opening moments for me. Even the first level or two, seem ever so basic to the point that I was literally starting to worry just how my fun this game could be.

Thankfully I’m here to say, after a truly oddly paced opening and few misfires of levels, the rest of the game shapes up to be much better. Players control Beck as he goes from level to level fighting the robots that have turned on the world. Each level features a different robot boss to fight and mechanics in the levels. One level has Beck climbing a tower with some interesting wind moments, another has him going deep into a mine, avoiding and out running machinery. Another favorite is the one that takes place on a highway as he hopes from car to car as the menacing robot for that level takes some cars out. Beck shoots out of his first very much like that other robot that is blue and once he finishes a boss off, has new powers at his disposal. Where things get a bit different is the dash move. After Beck shoots the enemies a bit, they get in a stunned state and when dashing nearby or into them can be absorbed. Depending on the enemy this can lead to status buffs for Beck like better firepower, or more energy for his other weapons. Combo’s can be chained this way, leading way to higher scores for each level. Not that this is necessary but folks that enjoy speed runs or score attacks will appreciate this.

The levels have some interesting moments, especially the later locations players can choose from. Any level can be played in any order, but I’d actually recommend them in the order they are presented after seeing them all.  There is one late in the game that has an interesting premises, but because there is no checkpoint whatsoever in the entire level aside from once getting to the boss, it caused some mighty fine frustration. This sort of leads me to the problems with the game. Frustration can occur with lack of good checkpoints, some frustrating platforming involving the dashing moments. Not to mention the final boss once again proves that a lack of checkpoints between two decently lengthen battles, is just frustrating until the point where players can learn the patterns efficiently. Once the game is completed there is also a ton of challenges to perform and even an online leaderboard race type gameplay element that I wasn’t able to truly test before embargo, though the question I ask is, is it really what players wanted to have to begin with? It’s a nice bonus either way. Mighty No. 9 was a long time in the making and with lots of discussion and chatter before release. I think there is a solid foundation for a shooting/platforming type game here and it clearly has some great elements to it. It doesn’t quite invoke any originality though neither from a gameplay perspective or even a visual one as, but as a whole and for the price of $19.99, I think it’s suitable. I wanted to come off having beaten Mighty No. 9 feeling hugely satisfied and having a blast the entire time. Sadly the sum of my experience is that what is there is good, but this isn’t called Good No. 9, it’s Mighty and sadly I don’t think that describes my experience with the game at all.