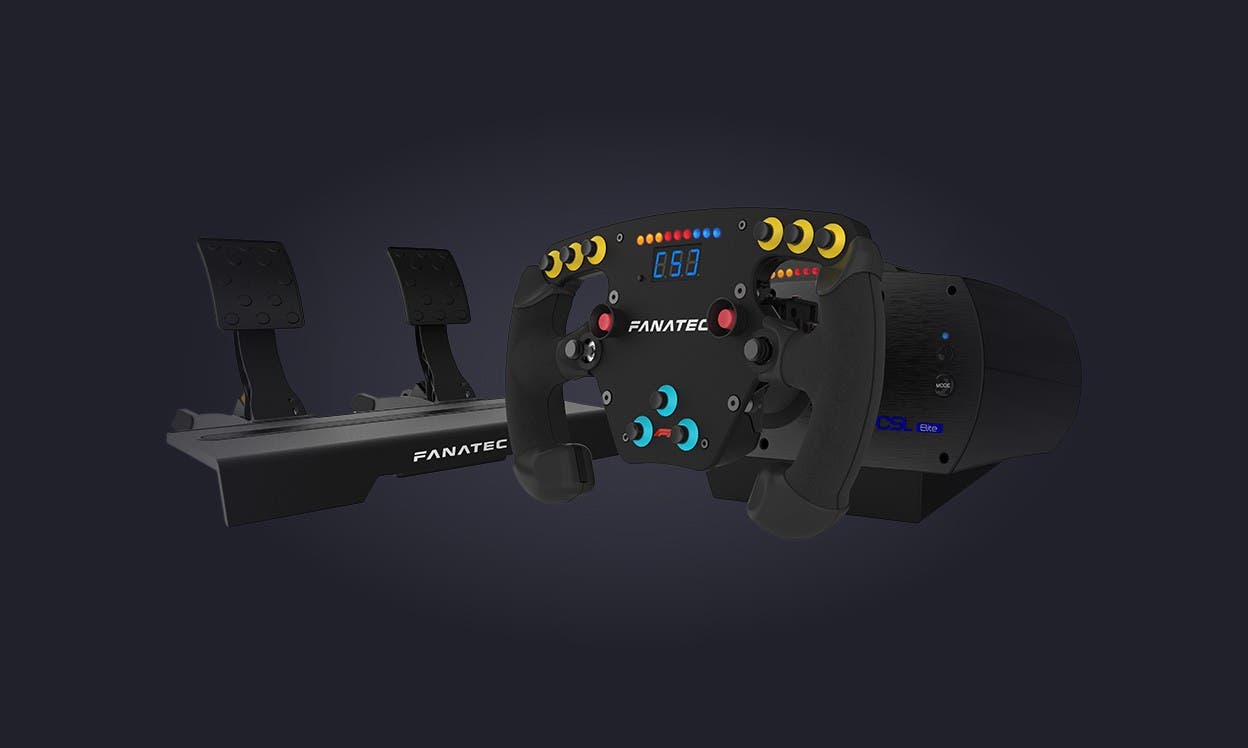 Fanatec has been at the apex of simulation racing hardware for years now. They make hardware that everyone who takes racing seriously, wants. Fanatec solves and creates a problem with the ClubSport Light (CSL) Elite set, something I wholeheartedly embrace. The CSL Elite set works out the desire to have multiple wheels for various purposes to facilitate the immersion of the sport you’re racing in. It also creates a mess of things because of the same reason; you’ll be wanting more than one wheel for all your virtual racing desires. Fanatec’s CSL Elite F1 Set provides lifelike force feedback and responsiveness that actually makes you a better driver. The Fanatec CSL Elite F1 Set is an excellent starting point for anyone serious about F1 or GT class style cars, where the steering wheel is an essential part of the experience. 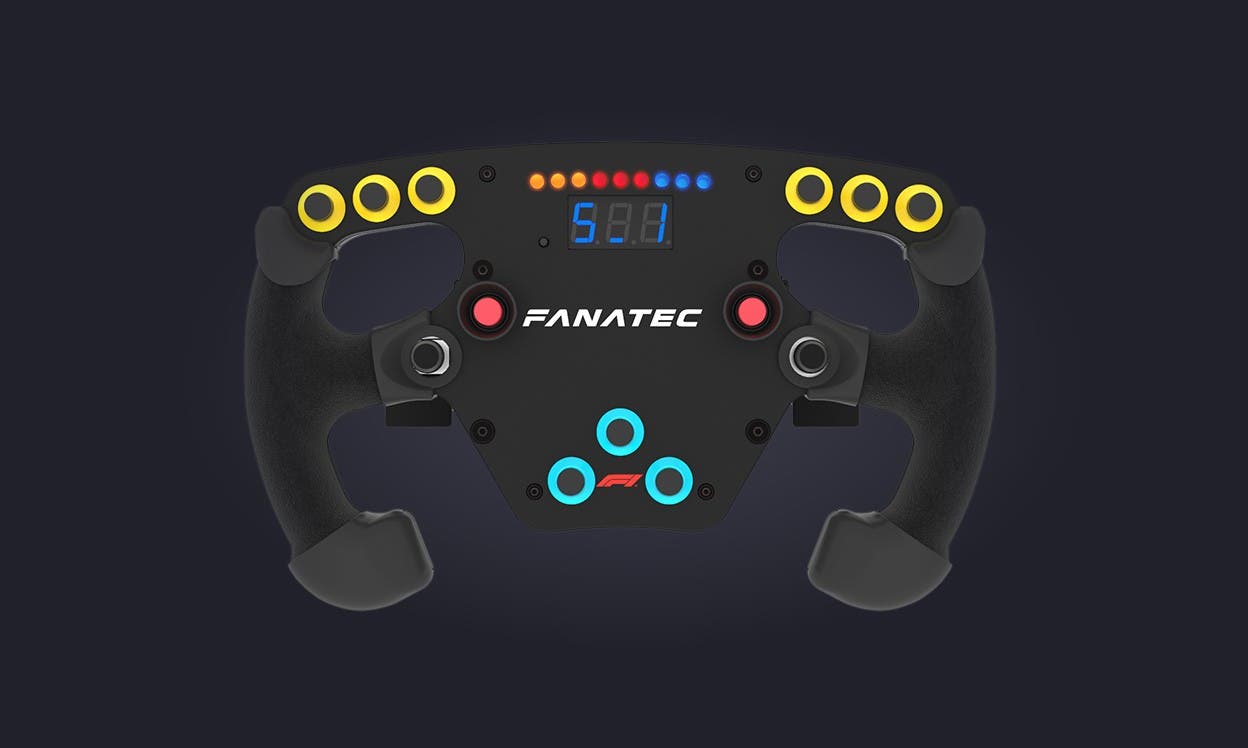 The CSL Elite F1 Set gets you everything you need to get started. It includes the CSL Elite Wheel Base +, the CSL Elite Pedals, and the ClubSport Steering Wheel Formula 1 Esports wheel. It’s apparent in naming and packaging of the box that this is an officially licensed product by Formula 1 and for PlayStation 4, but know it is not exclusive to it. The wheel base is also “Xbox One Ready”, but all that means is that it’ll be compatible with an Xbox One – only when an Xbox licensed steering wheel is attached, which the ClubSport Steering Wheel F1 is not.

I have used the CSL Elite F1 Set exclusively on PC, and its compatibility is fantastic. In almost every case, this set was detected. Only in some games that are considered “arcade” racers, I’ve found to be spotty. And that’s little to do with Fanatec, and more on the games themselves – more on that later. The actual use of the set is nothing short of remarkable. The wheel base has a hefty fan system to keep things cool as the servo motor with the single belt drive delivers incredible force feedback. This feels so professional and sturdy, that you’re gonna be more worried about it breaking you. 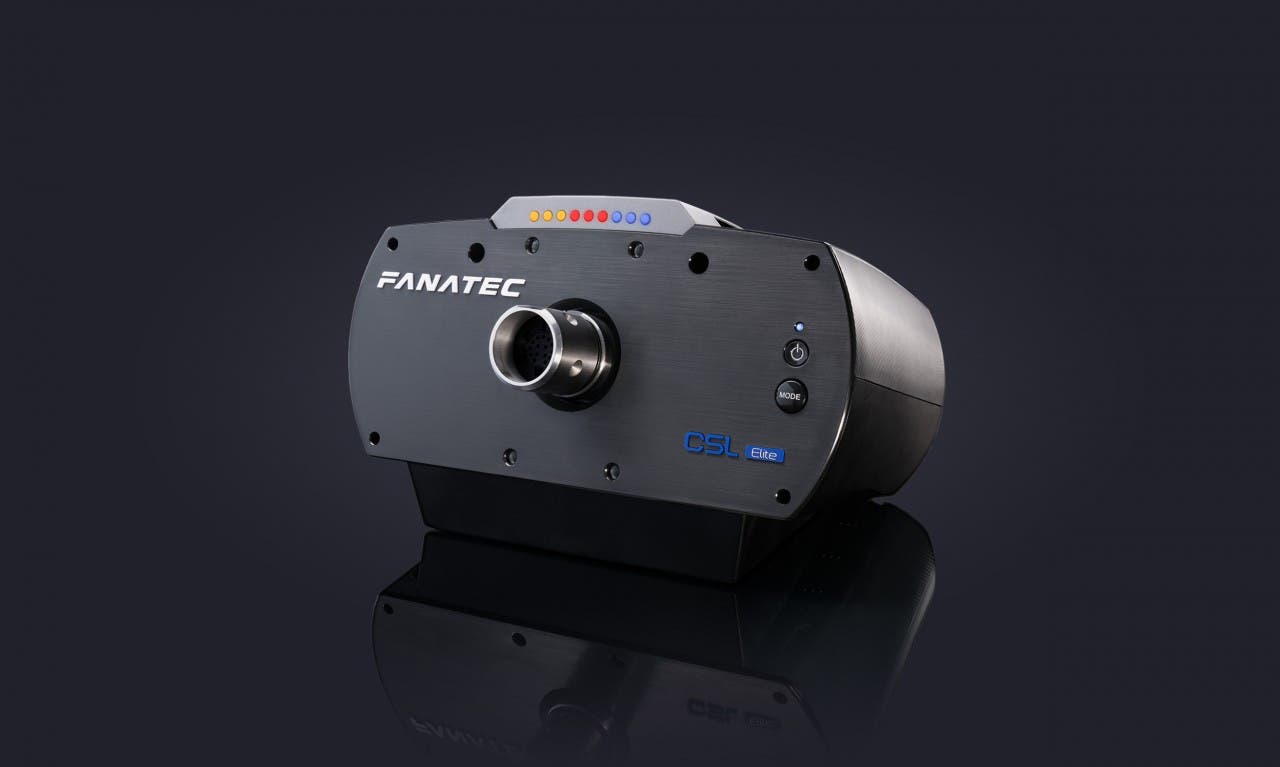 Putting together the whole set felt like an experience I’ve not had before. I’m not going to equate it to putting together a car or even a model car, but it was great assembling this. First you’ll attach the clamp to the wheel base, and then I moved onto the pedals. You are given notches in even spacing to place the accelerator and brake pedal as you see fit. When you have all three pedals, there’s perfect spacing for all of them. The pedal base is big, but not bulky. It’s heavy, but in some cases, not heavy enough. There were times during use that pushing on (mostly) the accelerator, would start to pivot the pedals off-center. There are RJ-45 connectors that plug the individual pedals to the hub, and then the hub connects to the wheel base. The F1 wheel uses a spring-lock to attach it. Attaching this wheel to the wheel base makes you feel like a real driver. There’s large metal pins on the wheels that connect to the wheelbase innards, and so there’s a docking procedure you must do. On the F1 wheel, it’s a spring-based locking mechanism, and on the WRC wheel, it’s a rotating ring that tightens. None of it is complicated, and it feels great to swap out wheels like you’re a real driver prepping or wrapping up an intense session. 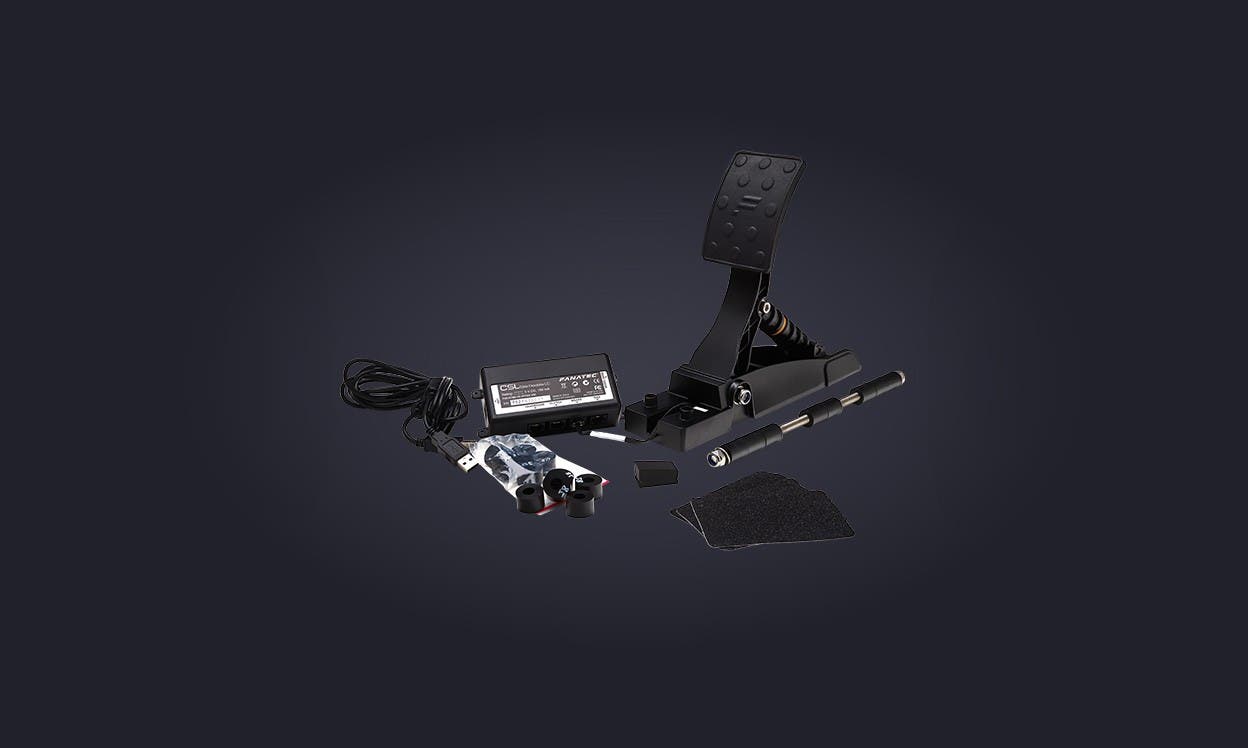 It’s worth talking about this add-on accessory that Fanatec sent this to me, since it also became a part of the assembly process. At an additional $139.95, this is an absolute must, I honestly can’t think of . It takes the existing CSL Elite Pedals and transforms them. What once was the brake now becomes a clutch pedal, and you insert the LoadCell Pedal in the brake’s former place. It also includes a new box with more ports to supports its inclusion for a three pedal setup, as well as a handbrake.

It’s just another pedal, right? No, it’s really not. This pedal has plastic rings on it to adjust the stiffness, but by default is it dialed in for F1 travel, in which it’s nearly nonexistent. For Formula One, brakes have almost no travel. So the pressure you apply gets a direct result. I don’t find the adjustments to be too time consuming, but it’s just best to find a mode of travel for the brake and stick to it, you can find a happy medium between games, or leave it at its default. It also comes with skid pads of three different variants to allow you to have something smooth or more textured. I was surprised I was even given the option, as so many other manufacturers just deal you what you’re given. And like a real car, not all pedals are textured. You might want the brake to be smooth so you can tell the difference between it and the accelerator, just by feel. 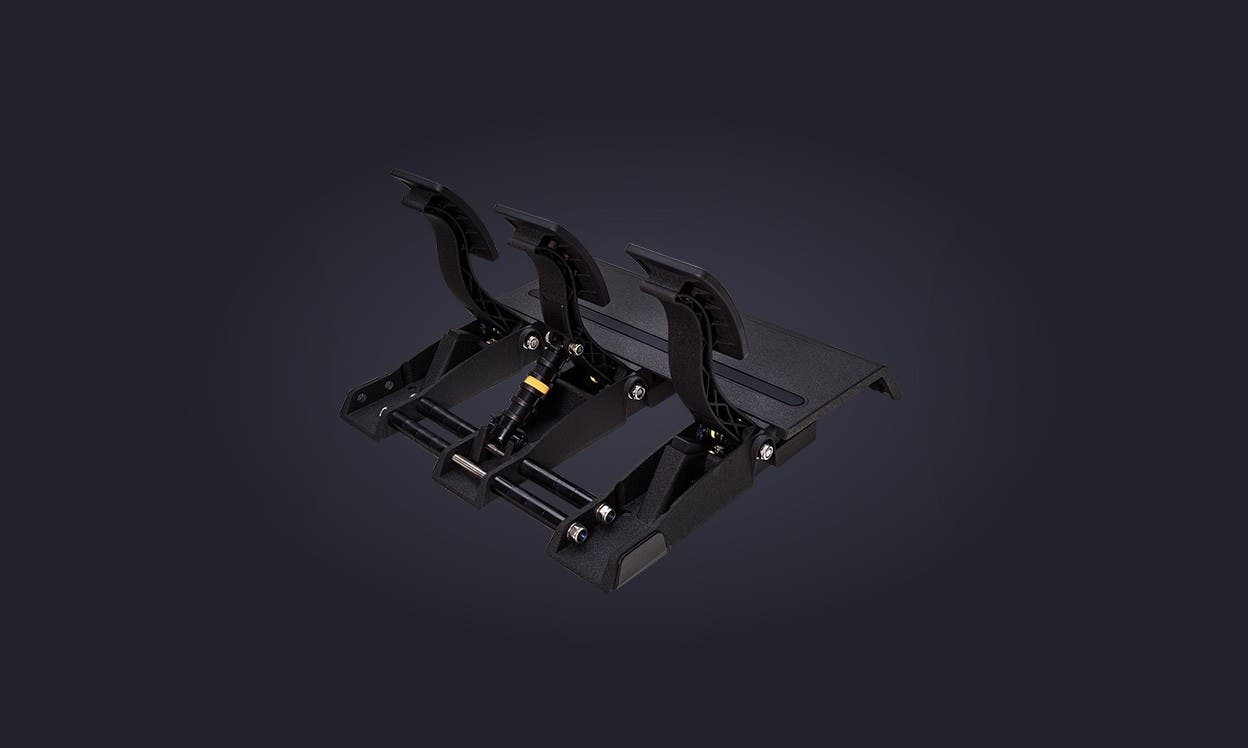 After you have everything connected, but before you give it power via USB and AC, you need to install the drivers. It’s then important to immediately visit the settings within Windows to ensure everything is working properly. While I didn’t run into any issues, I had immediately jumped into games and found that I was getting less than half of the applied pressure of the brake. So I was instantly going off-track and crashing into a wall. With the Loadcell brake pedal installed, it required tweaking. Once I adjusted the brake from the default 60% to 20% pressure, it recognized the brake when fully depressed. And then in games, I was able to brake fully without incident or needing to alter in-game settings to get it right. 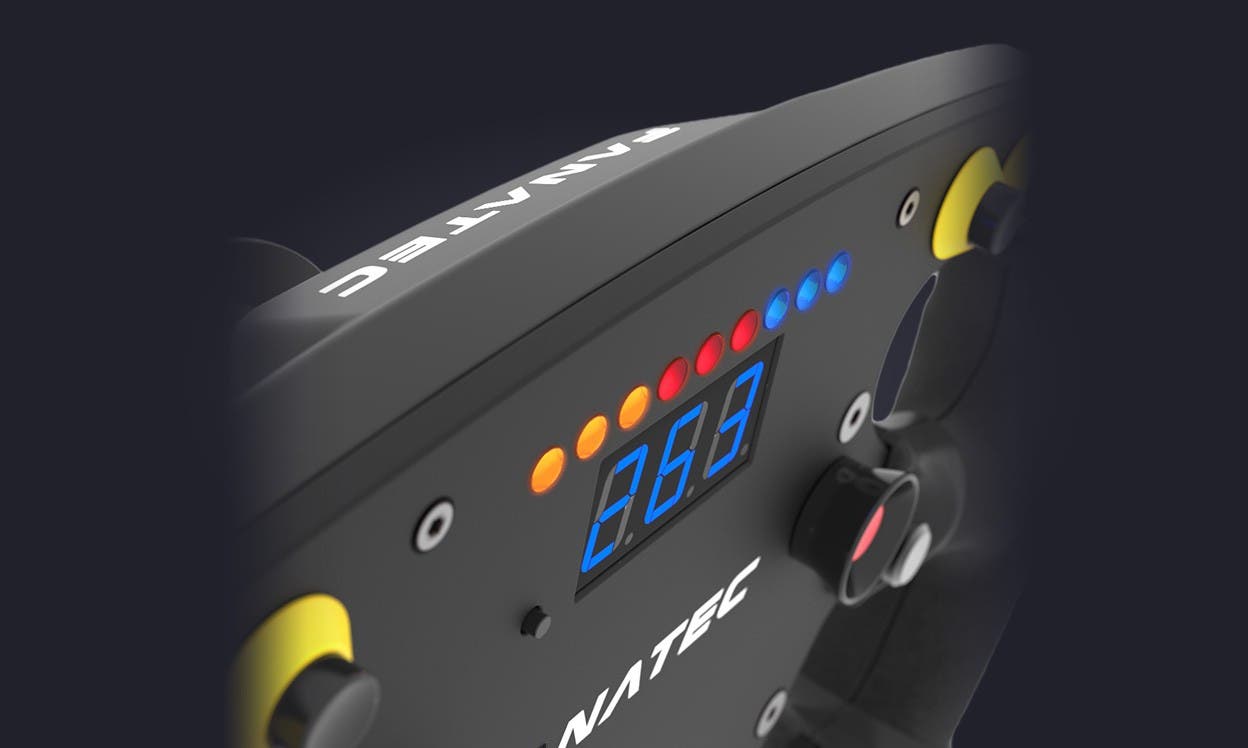 The jet black rectacular and angular design is immediately recognizable as a Formula One wheel. And that’s not just by the “F1” logo on the bottom center of it. There’s striking yellows, reds, and blues that surround a lot of the buttons. Every button has a cap on it, that can be replaced from a provided set. It does not include Xbox variants, but you can set buttons for specific actions that you know from F1 2020 or similar games instead. Or even remove them entirely for the aesthetics, or for to get rid of the shiny keys. There’s two joysticks, the left one moves like a traditional joystick with and L3-style button on top. The right joystick acts more like a d-pad with only four directions, with it having an R3-style button to click. Each of the top row buttons are within thumb’s reach, and its innermost button being at my thumb’s maximum reach. It’s a perfect fit, and have no complaints about reaching them.

The ClubSport Steering Wheel Formula 1 allows you to see the wiring between its front and backplate, and I think that has a really cool look to it. The LEDs compliment the wheel, with the rev limiter and speedometer displays. The speedometer displays alphanumerically with a brilliant blue. It’s true-to-life of the wheel it emulates. The lights on both sets of LEDs are bright and vivid. There’s no way to misunderstand what these lights are showing you at any given time. The wheel base also has its own rev lights, in the case that the wheel doesn’t support it. They’ll both operate in-game, but it’s never an issue, or being “too much”. 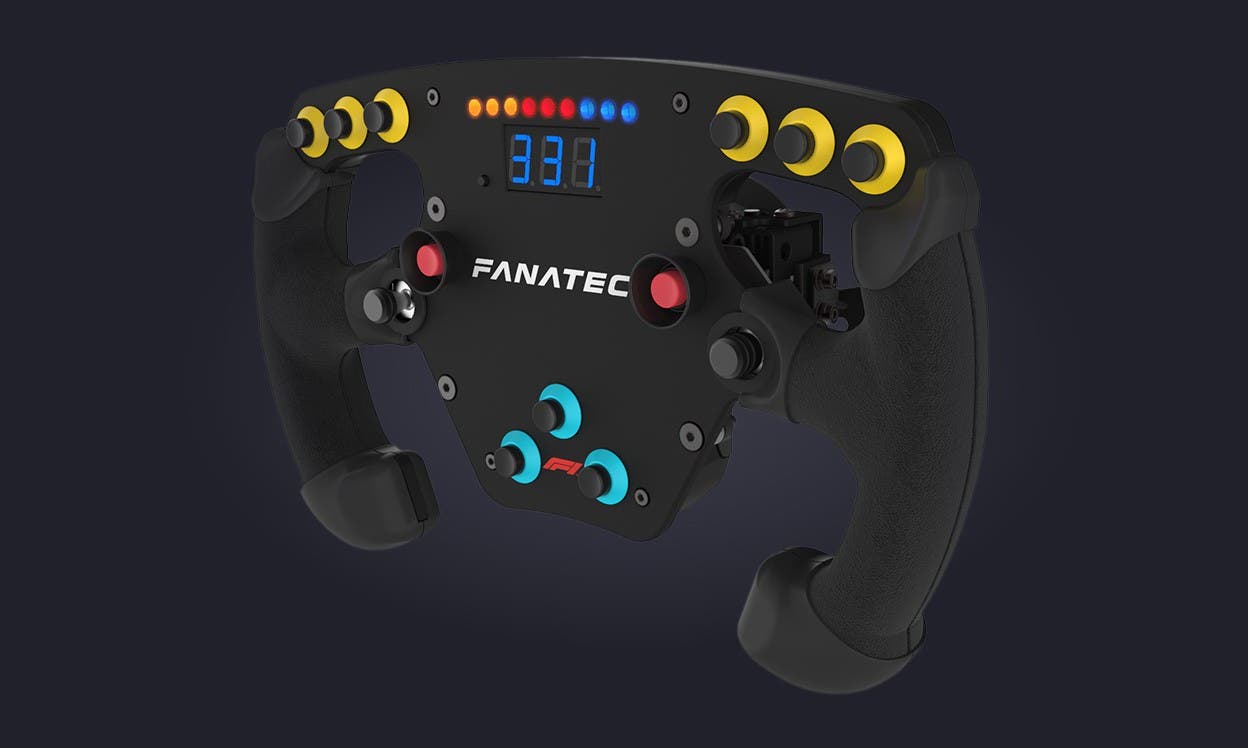 The handles where you’ll be holding the wheel are wrapped in suede, and it feels incredibly luxurious. I’m not even joking, it’s a soft, warming feel that I didn’t think would be better than leather. Now, it works because of the type of wheel this is and is a good fit for F1 and GT-style racing. In use over time, the suede never rubs off or leaves any kind of black fuzz or residue in its use. The wheel is complete with soft, mechanical paddles. They’re audible but not loud, tactile but not imperceptible. They’re small in size, but feel right and are accurate to the motorsport that they are a replica of.

The Force is strong with this one

In action, the Force Feedback feels like nothing I’ve ever felt before. Coming off my Logitech G27, this is like a night and day difference. In most games I had to reduce the force feedback down to about 80%, but I still found that to be intense and reflect the type of road surface I was on, or conditions I was facing. It also becomes so realistic in giving you feedback, that you begin to understand where and when you’re losing grip, to then begin compensating for it without before it becomes a problem of traction loss or overcorrecting. It’s incredible how much I was missing out on, and how much new information I gained. 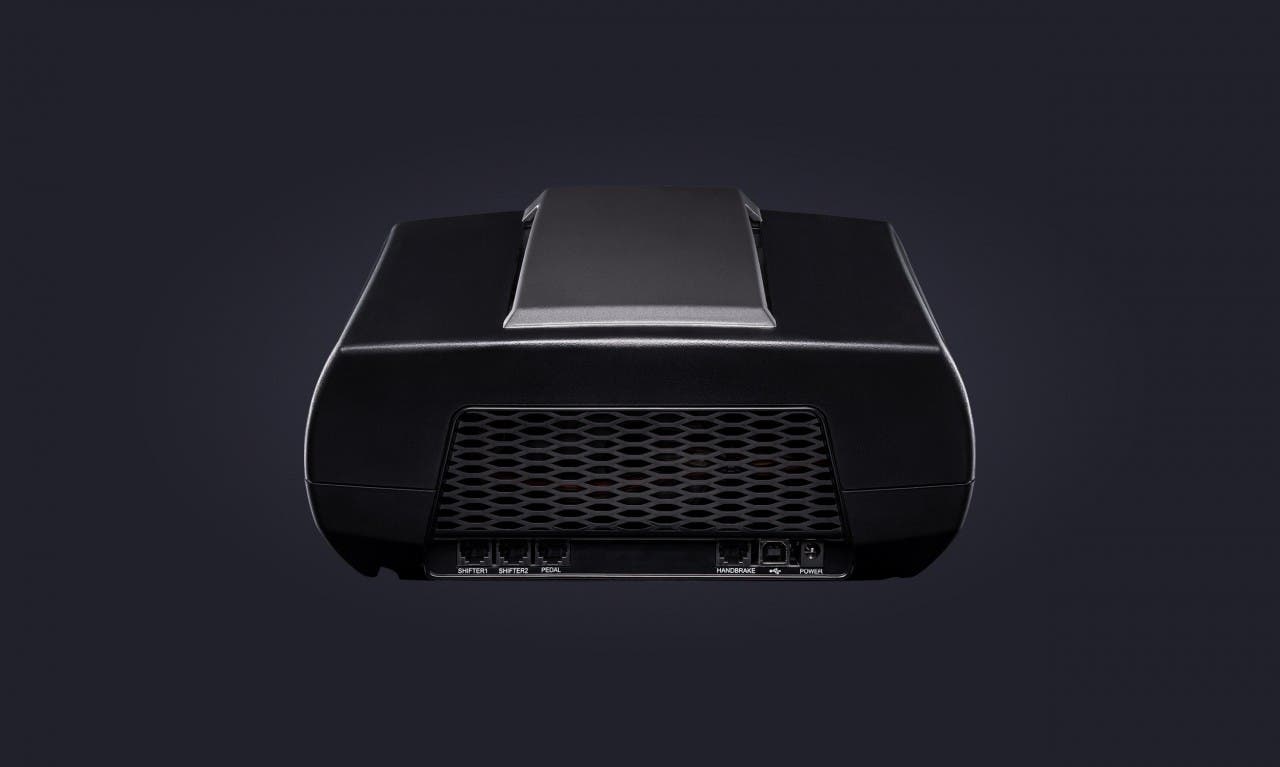 On the simulation side of the house, there are a lot of games that support this wheel base, wheel, and pedals with little to no effort. The same can’t be said for arcade-style games. Compatibility falls on each component: wheel base, pedals, and wheel that’s attached. This can change as certain components are available or not. The wheel base has different modes for how it is connected: red is for PC, blue is for PlayStation, and green is for Xbox. The modes will only switch to what the wheel can support.

For simulation racing, I found that F1 2020 is the best supported game, with everything working with absolutely no effort. It’s the best example of this set by far, which isn’t a surprise given the licensing on it. Forza Motorsport 7 thrives in its GT-series while using this wheel, as the handling is incredibly smooth and natural. Next up, both Assetto Corsa & Assetto Corsa Competizione required zero setup to get racing, and it’s a smooth transition, and a natural extension of the wheel. Unconventional, but DiRT Rally 2.0 and WRC 9 are playable with this wheel, though more intricate maneuvers are unattainable due to not having a fully circular wheel to work with. The same goes for something like DRIFT21. Newer releases like Automobilista 2 and older releases like Project CARS 2 also have native support, and work great out of the box. Now when you get to games like American Truck Simulator and Euro Truck Simulator 2, you start to need configuring the games for each individual action.

For non-simulation (or arcade) racers, the results become rather disappointing. While the wheelbase and pedals are supported, the wheel becomes a challenging exercise in frustration. Project CARS 3 shows the set as listed in the settings, but configuring it was a nightmare, and I’m going to classify it as unsupported, because even defining things manually would just not work. Forza Horizon 4 was a bit more forgiving, but it required to manually configure in order for it to work.

Support for this wheel is pretty widely accepted. In testing, arcade games have the most trouble with detection / usability. For simulation games, you’re going to have little to no trouble getting setup and out on the track. The less friction the better, and Fanatec has done just that.

At this stage, I can’t ever use anything but Fanatec racing hardware going forward, they’ve made it impossible for me to go back to anything else. All other wheels and setups are dull and lifeless by comparison. There’s something really special and satisfying about affixing the wheel to the base each time you go to start racing. The force feedback, pedals, and F1 wheel provide some much needed realism, which is what you’ve always wanted from a driving setup. While it’s true that your investment into this ecosystem is costly, it doesn’t disappoint. The CSL Elite F1 Set is an exceptional way to play racing games, it’s so close to the real thing — Fanatec has made me a believer.