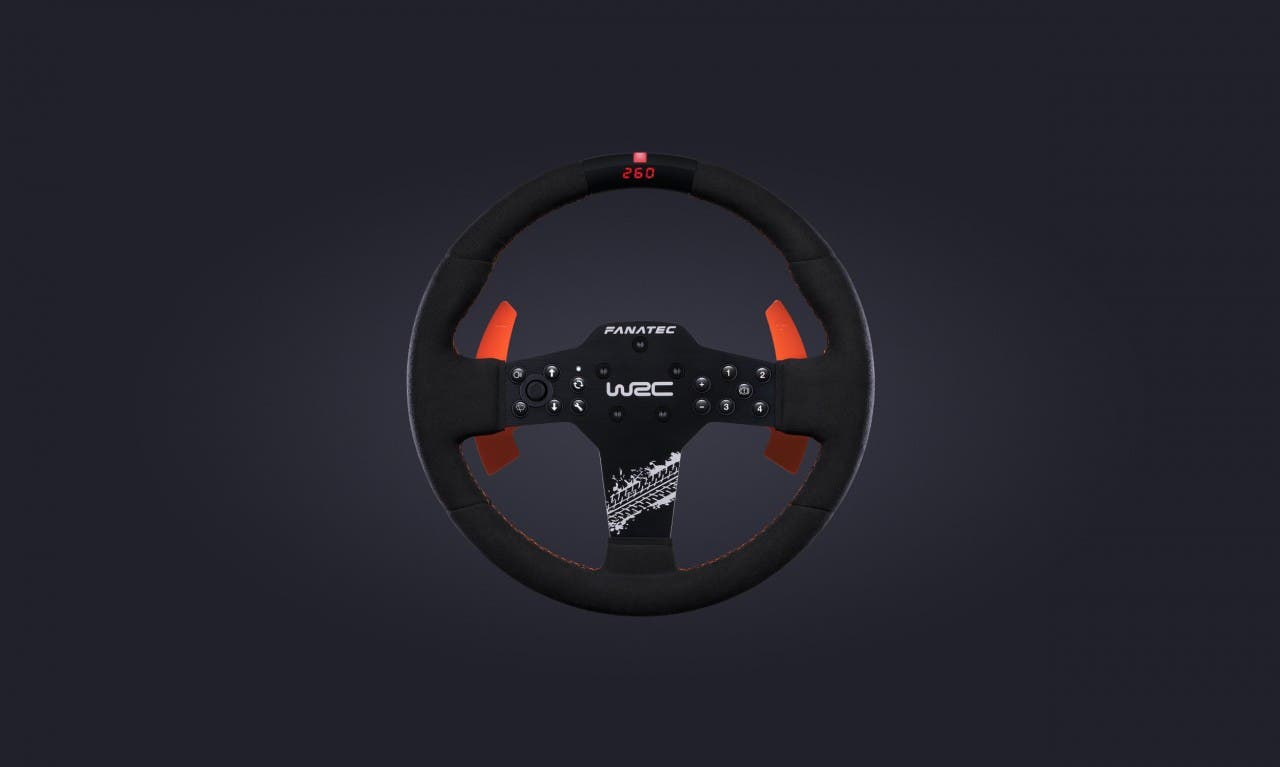 Building off of the extraordinary Fanatec CSL Elite F1 Set, is the ClubSport Lite (CSL) Elite Steering Wheel WRC. You can purchase this wheel by itself as a new interchangeable part for the CSL Elite Wheel Base +, or as a complete system like the F1 set. It’s got direct compatibility for Xbox One (including Xbox Series X), PC, and even PlayStation 4. This is perfect for anyone just getting into simulation racing, or if you’re already invested in the Fanatec CSL Elite ecosystem. Fanatec offers a stylish, rally-inspired wheel that has multifaceted capabilities across all types of racing and driving. 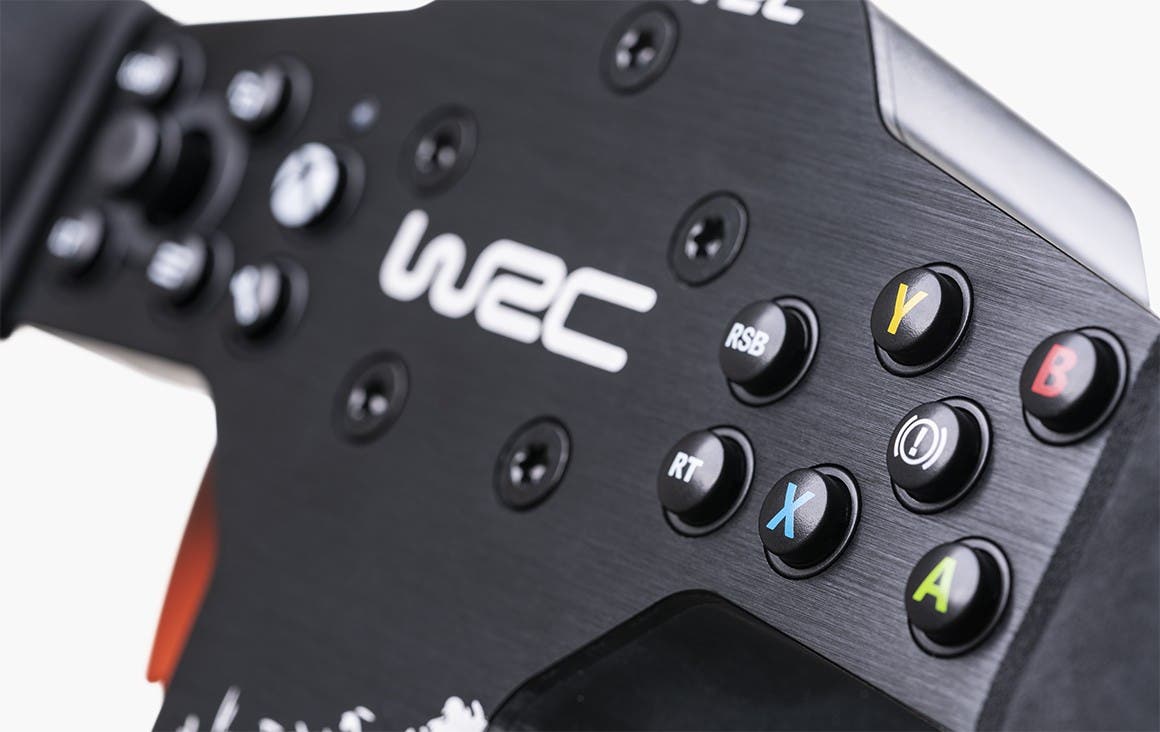 Fanatec’s offering here is licensed in conjunction with WRC 9, which it works splendidly with. Whether you buy this in a bundle or standalone if you already own the wheel base, it’s a great wheel to have. The CSL Elite Steering Wheel WRC works on the CSL Elite multi-platform Wheel Base +, covering all major platforms. The box that comes in may be all Xbox green, but it’s also “PS4 ready”. All that means, is it’ll work with a PS4 compatible wheel base, which the CSL Elite Wheel Base + is compatible. This is the kind of thing that just works, right out-of-the-box, and you’re able to start playing games with little to no setup – it doesn’t get much better or simpler than that.

Now, let’s say you’re someone who bought the CSL Elite F1 Set, why would you want more than one wheel? Well, there’s a few reasons. The F1 wheel you get in that set is really specific to F1 and GT-style racing, and the rectangular design of the wheel is limited for what it can do in terms of accuracy. The WRC wheel here is a tactile and worthwhile difference. I mean, the biggest difference is that this is a completely round wheel, so it can work across all types of racing and driving games universally. Sure, this gets expensive pretty quickly, but for those who are looking to get deeply immersed, swapping wheels to match what you’re doing is all part of the culture/community. 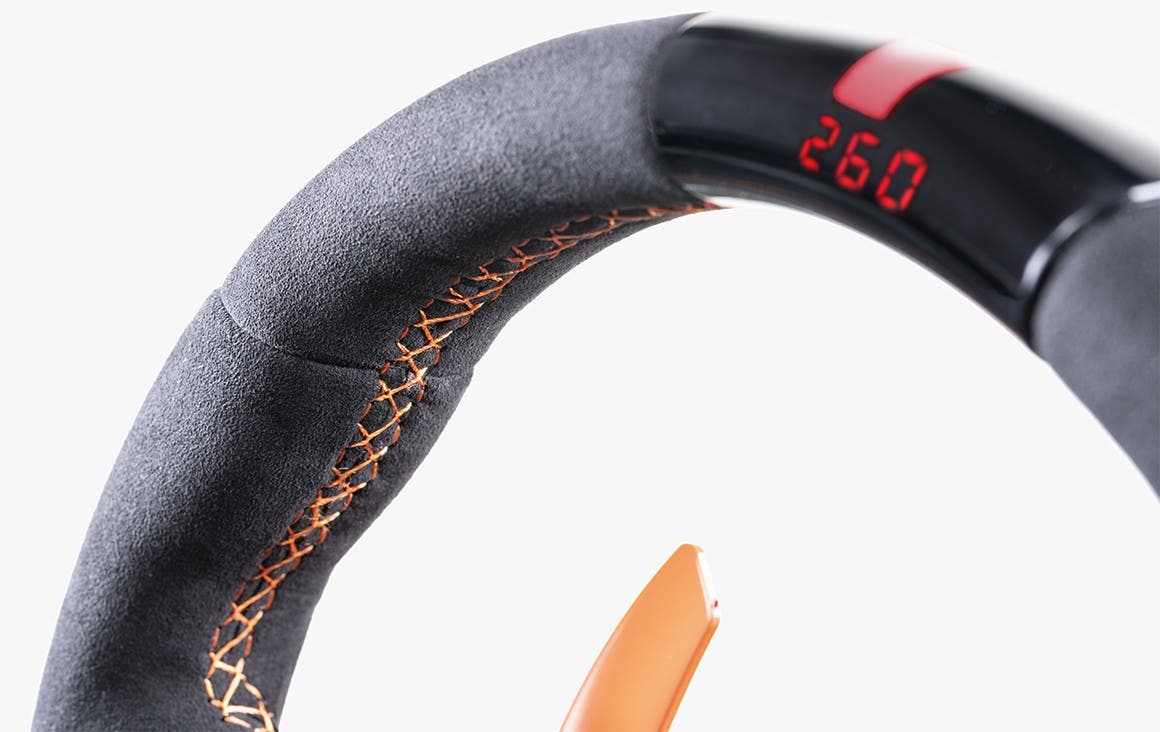 Since I’m reviewing the wheel itself, there’s no assembly to this. You just ensure that the quick release connector is in the unlocked position, align it correctly, and dock it into the CSL Elite Wheel Base +, and then tighten to lock it into place. You’re also given a guiding line to let you know whether it is fully tightened or not. It’s a fool-proof system that doesn’t require any tools to connect. 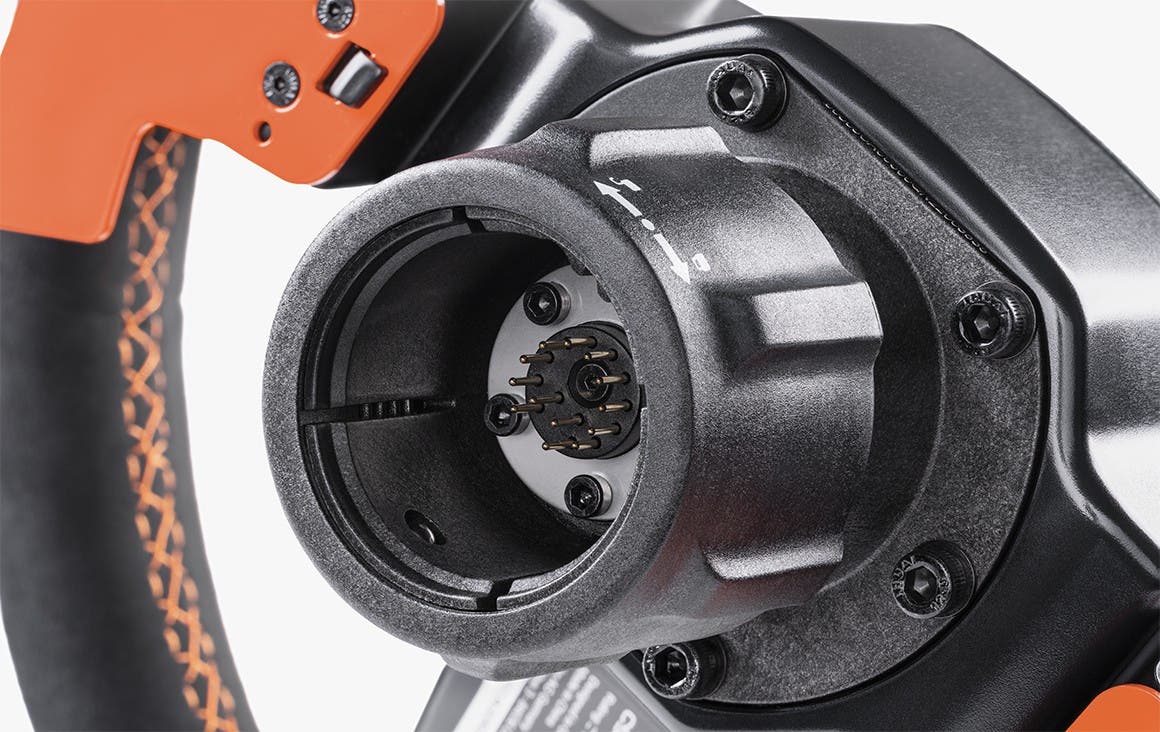 The black, white, and orange color scheme is a contemporary look that fits in with the rally theme and WRC licensing. The paddles are orange, as are the stitching that holds the black suede into place. The brushed aluminum of the face has a great look to it. There’s a slightly gaudy, but unique tire print in mud along the bottom that’s a take it or leave it kind of thing. On the top center where you’d normally find a colored mark to demark the proper “center” position for the wheel is a reflective plastic piece with an LED strip. It lights up when in use to indicate the rev limiter. There’s also a three-digit LED strip below it that will display units during play. This wheel only has one joystick, and I wish it had two similar to the F1 wheel. If you don’t have affinity for rally or the WRC in particular, the branding might not be to your tastes. Overall, it’s got a great look, and an all-purpose wheel.

The CSL Elite Steering Wheel WRC measures 300mm in diameter, or 11.811 inches. My previous wheel, the Logitech G27 wheel measured at 11 inches even. It certainly feels bigger than the G27 for obvious reasons, but it being closer to 12 inches in diameter is a noticeable difference. I drive a newer Ford Fusion, which measures 14.75 inches in diameter, so it is not a facsimile for your daily driver. However, rally steering wheels measure around 12.99 inches these days, so it is this fact that makes the CSL Elite Steering Wheel WRC almost a replica, off by one inch which is a real close over any other wheels on the market. 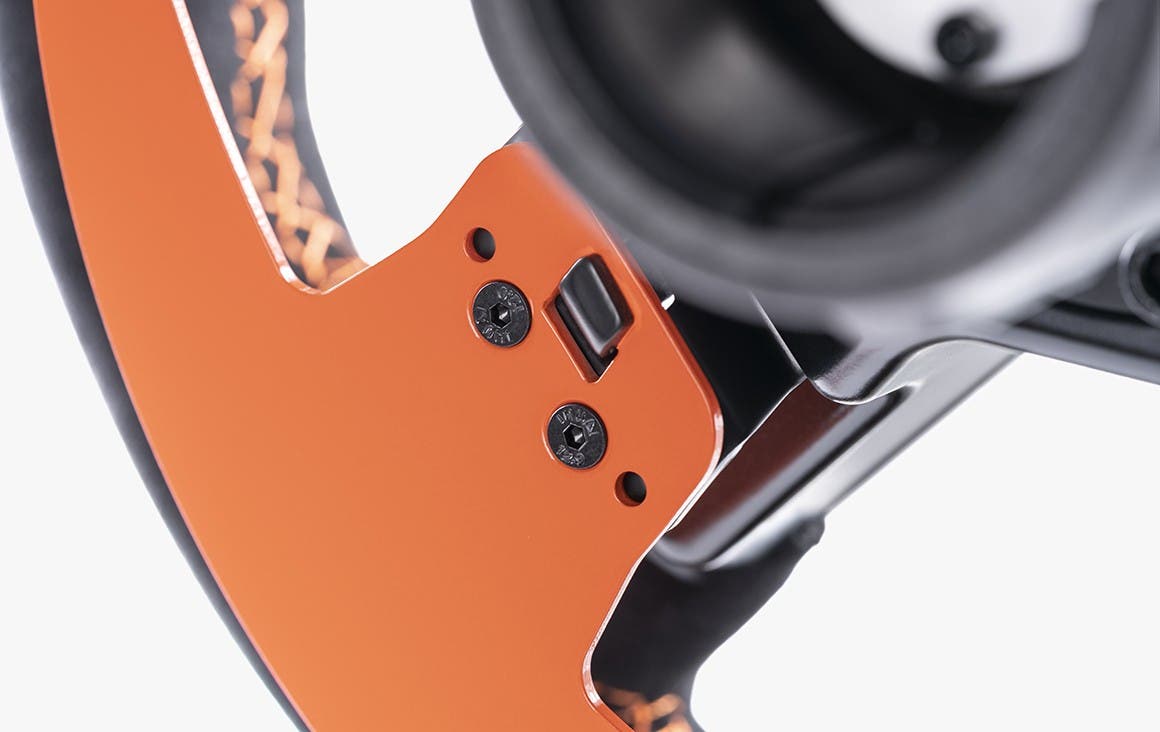 The suede is very soft, and it doesn’t burn when you let the wheel slide through your hands. There’s never been any residue or fuzz from using the wheel over extended periods of time. The stitching feels like it’s made of quality material. This is a wheel that feels really great to hold, and you never lose control when in-use.

They’re not easy to miss, but this WRC wheel comes with large paddle shifters. These metal paddles are big, with stiff but quiet clicks. These much quieter than the F1 wheel I reviewed. Their size ensures that at no point will you miss a shift, or lose their position in the heat of the moment. The paddles can actually be removed if you happen to have paddle shifters that are attached the wheel base already. Fanatec thinks of everything.

Each button has caps that can be swapped for more generic ones instead. So you can place caps that give you rally specific needs (wipers, handbrake, horn, lights). It’s not a requirement, but I think those going for the true realism will want to remove the “gaming” parts of this as much as possible.

If you have the loadcell pedal, this is a worthwhile add-on because then you’ll have a full three-pedal system for clutch, brake, and gas. If you don’t, it’ll be an extra $139.95. With its default position, the loadcell pedal has a short travel, ideal for Formula One racing. If you’re not playing F1 2020, or even Gran Touring-style racers, then you might want to alter the travel for something that goes a bit farther to emulate the racing discipline you play. All the same, the feel of the pedal is so different than the default pedals you get in a kit, and it’s almost a necessity to have in your home. 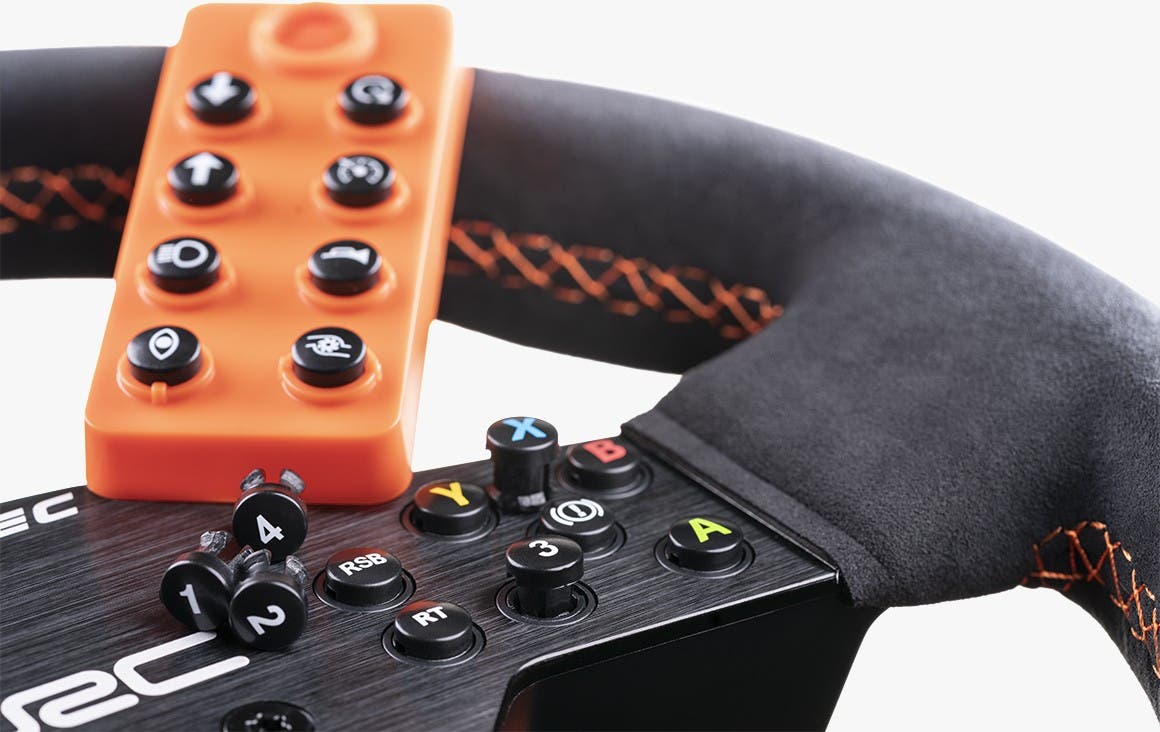 There’s not much difference in capability as the only difference is the wheel, but the wheel base and pedals are the same. However, the results are nearly the same as the CSL Elite F1 Set, in that simulation games are all compatible, where as arcade racing games are iffy in their implementations, and may or may not detect them for use. Though, for the specifics of the CSL Elite Steering Wheel WRC, we’re going to be talking about how these games felt while using this.

For the simulation games, WRC 9 was a perfect fit. This comes as no surprise because it was designed in conjunction with the game, and it feels great to use. DiRT Rally 2.0 worked similarly, but the force feedback implementation of that game was weaker by comparison, but was reactive and I didn’t have to fight the wheel for control. I found that Forza Motorsport 7 felt right at home, whether I was driving a consumer car or a professional race car. DRIFT21 had excellent support, and I was able to drift with ease. There’s also onboard settings to reduce the resistance, ideal for drifting. I then tested with American Truck Simulator and Euro Truck Simulator 2, and not only did the wheel work great, but it helped the overall experience. Now, games like F1 2020, Assetto Corsa, Assetto Corsa Competizione, Automobilista 2, and Project CARS 2 all work, but feel better suited for the F1 wheel instead, but this being a “normal” wheel did not hurt the experience in any meaningful way.

For the arcade racers, or non-simulation games, Forza Horizon 4 worked with no effort. It was detected and started working. The fact that this is an Xbox game probably helps things. Project CARS 3 on the other hand, there was nothing I could do to get this to be detected.

Support is widely accepted here, thanks to the fact that the wheel base and pedals are standard to the CSL Elite, and the interchangeable wheels are the only new element. Fanatec has a great wheel here, and the only hinderance will be a game’s decision to support the wheel or not. 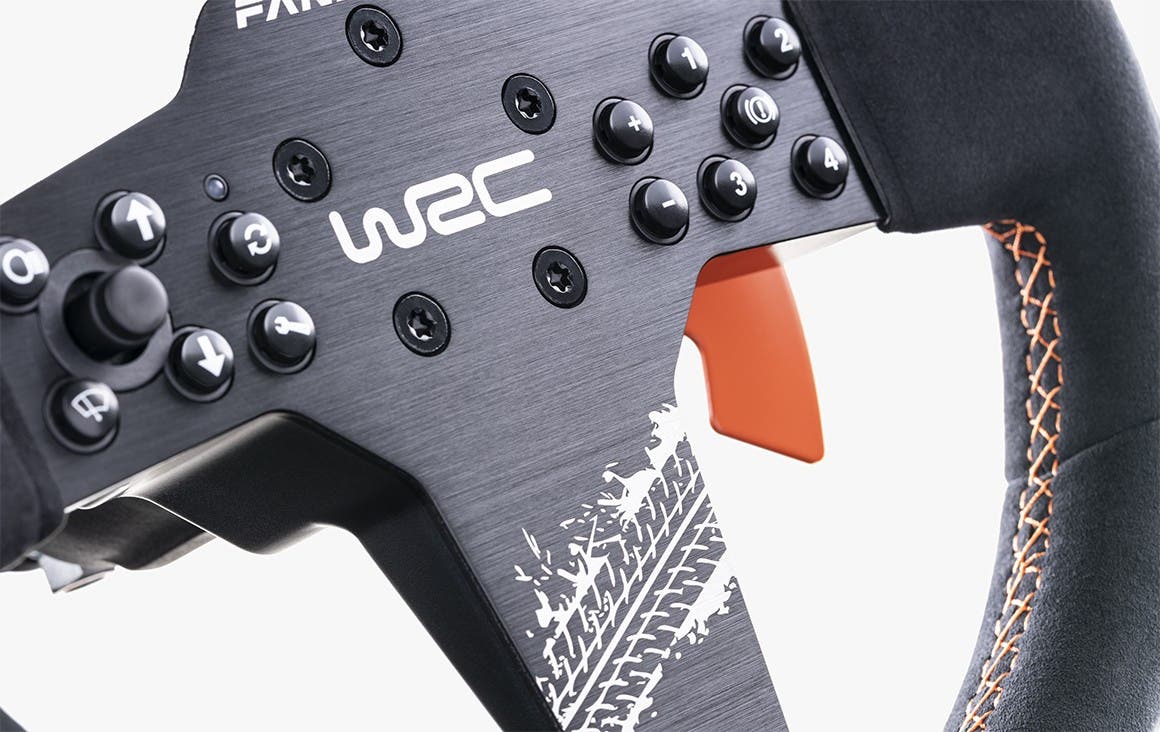 Yet again I’m impressed by Fanatec’s commitment to authenticity. I think if you’re delving into simulation racing for the first time, this is the wheel to get first with the CSL Elite set. Fanatec captures the look and feel of a real wheel that makes it equally scary and exciting to use. It’s also so easy to put on and take off, maintaining the illusion that you’re a driver, which is in lock-step with the immersion factor. The Fanatec CSL Elite Steering Wheel WRC is an excellent all-rounder, ready for any game with wheels you throw at it.